From Massimo Bottura to Gordon Ramsay…

Here at What’s On we love championing our homegrown heroes, but let’s not forget Dubai is also full of international talents, with restaurants from some of the brightest stars of the culinary world. For star-studded dining in the UAE, here are 18 celebrity chefs with restaurants in Dubai. 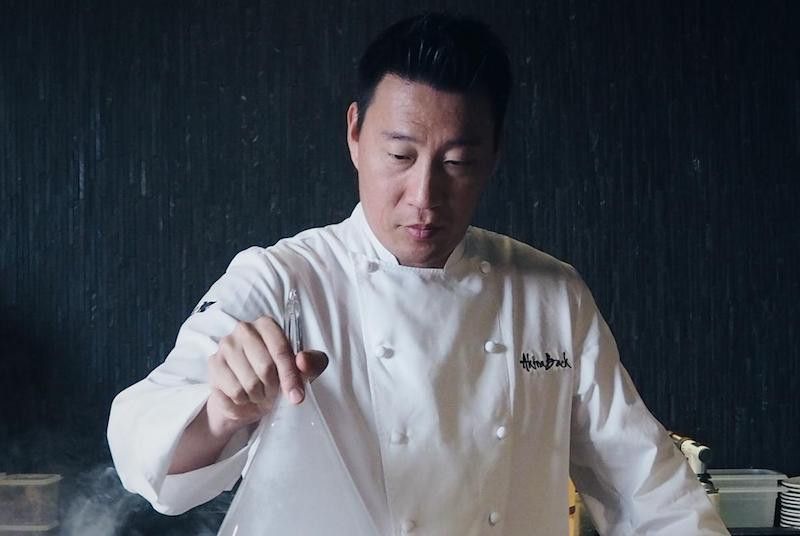 Korean snowboarder turned chef and TV personality, Akira Back is one of two celebrity chefs with restaurants at W Dubai – The Palm. The eponymous restaurant’s cuisine has a strong Japanese bent, with Korean and pan-Asian influences running through it. Signature tastes include the tuna pizza and AB tacos. 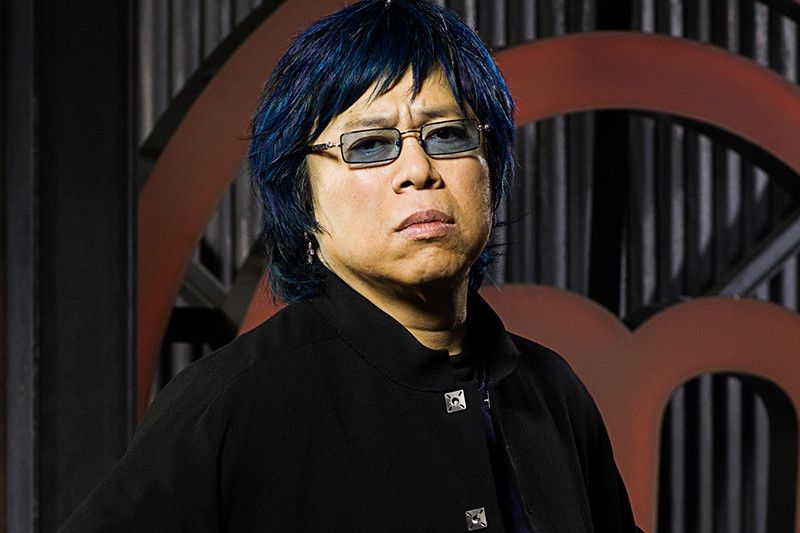 Known as the ‘Demon Chef’, Hong Kong-based Alvin Leung is a judge on MasterChef, with many a Michelin-starred restaurant to his name. Most recently including his new venture in Dubai, Demon Duck. The modern Chinese restaurant can be found in Caesars Palace Dubai, on the ground floor. 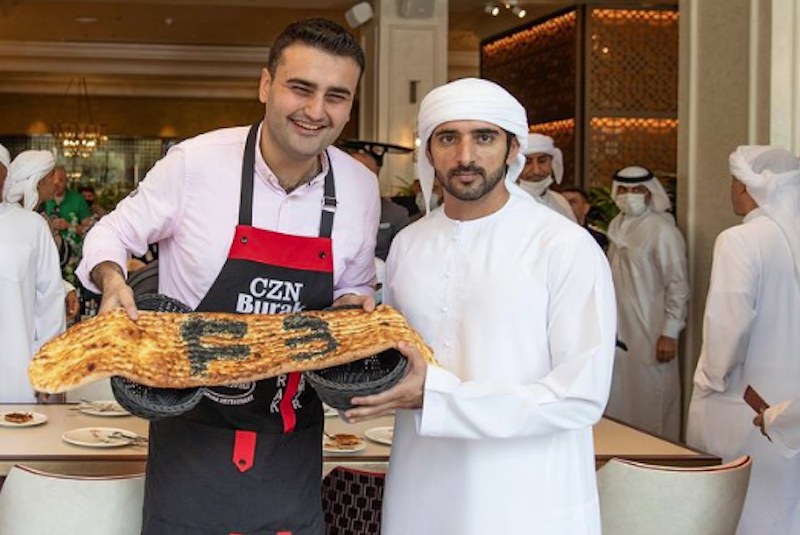 Known for his outrageous cooking videos, Chef CZNBurak already counts Cristiano Ronaldo and HH Sheikh Hamdan bin Mohammed bin Rashid, Crown Prince of Dubai as fans. Both were spotted dining at the Dubai restaurant when it opened its doors in December 2020. Since then, it’s been a steady stream of celebrities and fans through the door. He also has two burger restaurants in Dubai. 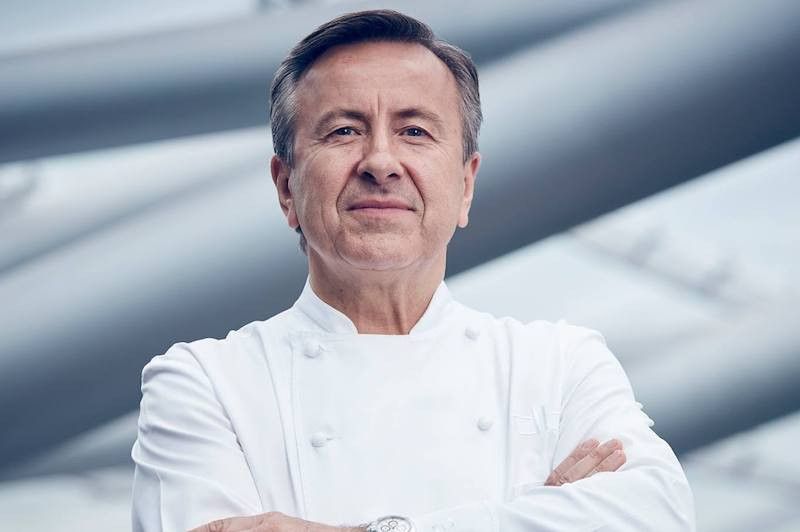 French-born chef Daniel Boulud is best known for his eponymous New York restaurant, the two-Michelin-starred Daniel, as well as a slew of brasseries and bistros as far afield as London, Singapore and Washington DC. For his first foray into Dubai, he’s set up shop in the Sofitel The Obelisk, opening Brasserie Boulud in the glitzy new Egyptian-themed hotel in Umm Hurair 2. Expect faultless European cuisine and intuitive service in stunning surrounds. 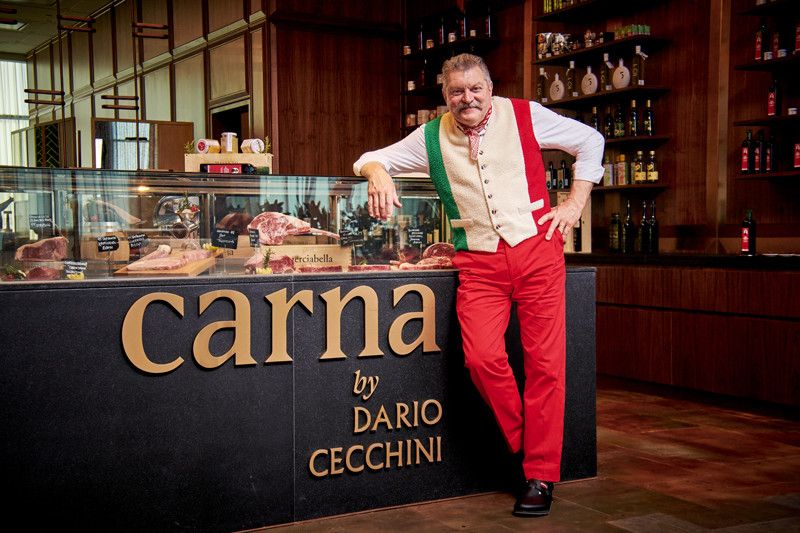 If you’ve seen Netflix’s popular series Chef’s Table, you’ll recognise Cecchini from volume six. The larger-than-life trumpet-blowing, meat-carving, butcher-cum-chef opened his first international outpost in Dubai, and the convept ‘Carna’ is just as bold and lively as its creator. With as much respect for the animal as possible, Dario Cecchini turns parts of the meat normally disregarded into culinary masterpieces. Dishes such as 12-hour slow cooked cow tongue and marinated beef heart skewers are signatures, which guests are encouraged to try before casting judgement. 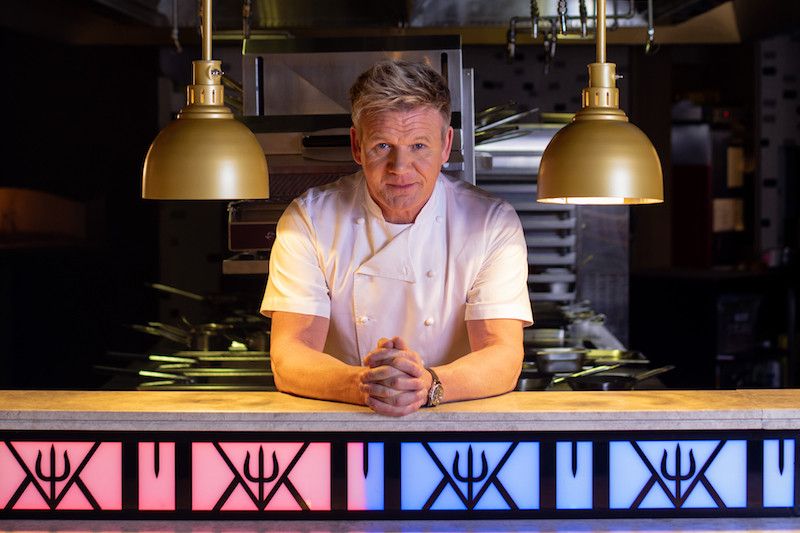 Gordon Ramsay brings his signature British cooking to two restaurants in Dubai. At Atlantis, The Palm you’ll find Bread Street Kitchen, a casual eatery with a crowd-pleasing menu of beef Wellington, roasts and classic fish and chips. His other restaurant can be found at Caesars Palace Bluewaters Dubai, and is named after his popular TV show, Hell’s Kitchen. 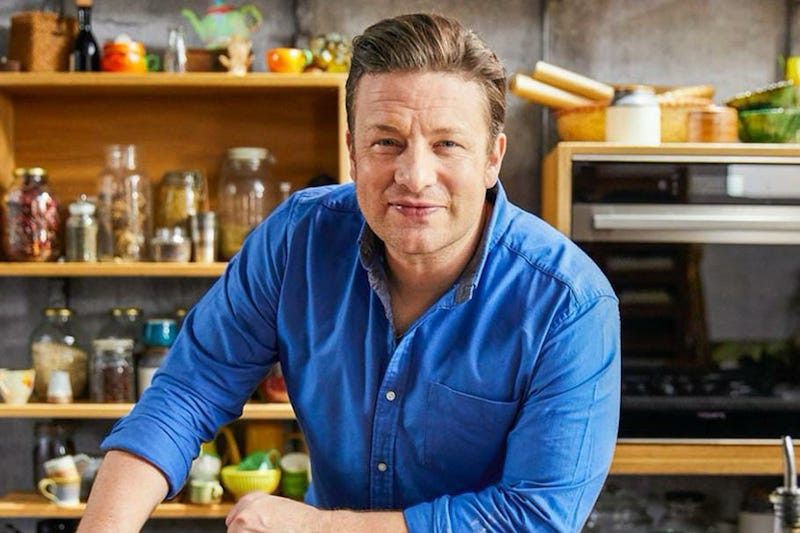 His restaurant empire may have crumbled around the world, but Jamie Oliver fans can still get a taste of the chef’s unfussy Italian fare at Jamie’s Pizzeria in JLT. Jamie’s Italian is also now available in Dubai, with two locations in The Dubai Mall and Dubai Hills Mall. 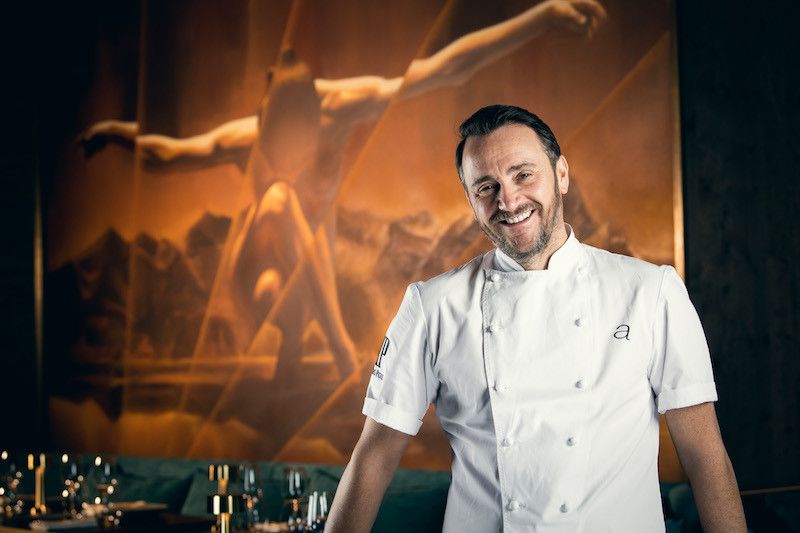 Michelin-star-toting British chef Jason Atherton has restaurants in London, New York, Shanghai and St-Moritz. Here in Dubai, he brings his modern European sensibilities to Marina Social, at the InterContinental Dubai Marina. Order the beef Wellington for two, or leave your meal in the hands of the kitchen, with the ‘Feed Me’ menu. 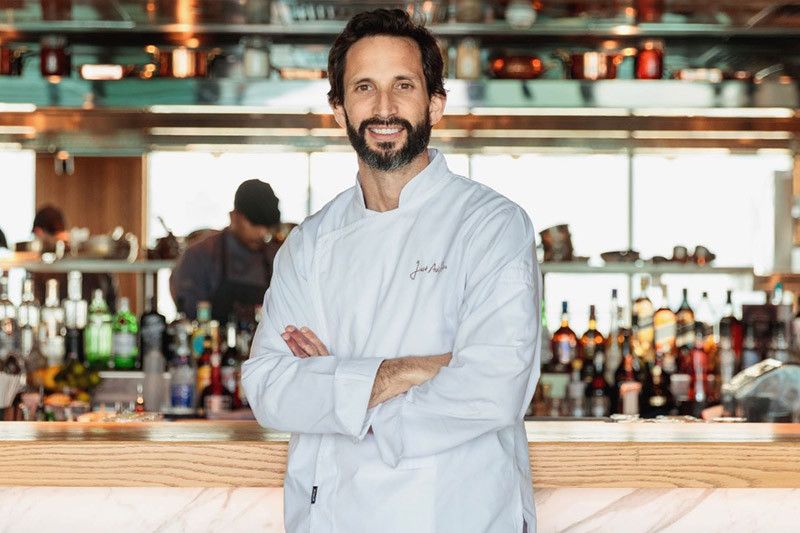 Tasca is the first international offering from culinary mastermind José Avillez, who pours the heart and soul of Portugal into every plate of this Michelin-starred menu. Genuine Portuguese flavours are transformed with contemporary twists, and paired with an extensive collection of Portuguese wines and a setting that few can rival. A skyline-facing infinity pool serves as a particularly jaw-dropping backdrop. 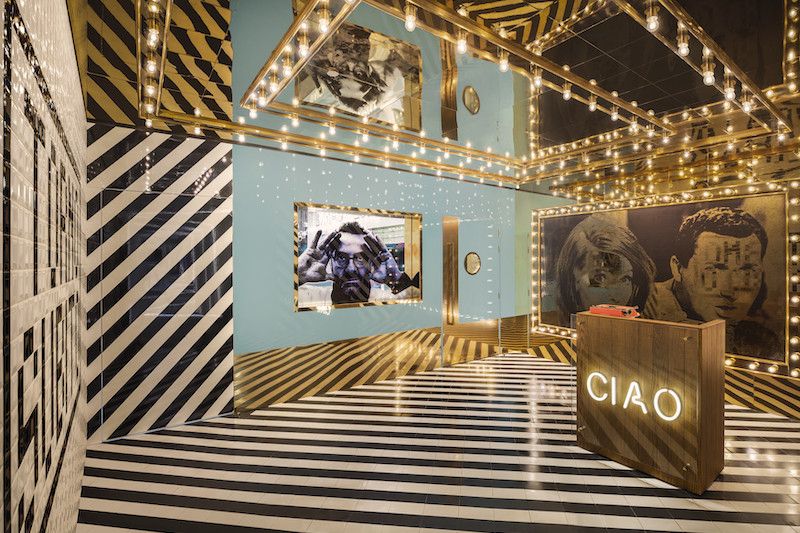 His restaurant in Italy, Osteria Francescana was rated as the world’s best restaurant two years in a row. So, it’s safe to say chef Massimo Bottura knows his way around a kitchen. His first restaurant outside of his homeland, Torno Subito can be found at W Dubai – The Palm. Inspired by Massimo’s childhood on the Italian Riviera in the 1960s, the beachfront eatery’s fit-out is retro, playful and bold – and it comes with a menu to match. It was recently one of 11 restaurants in Dubai to be awarded a Michelin Star. 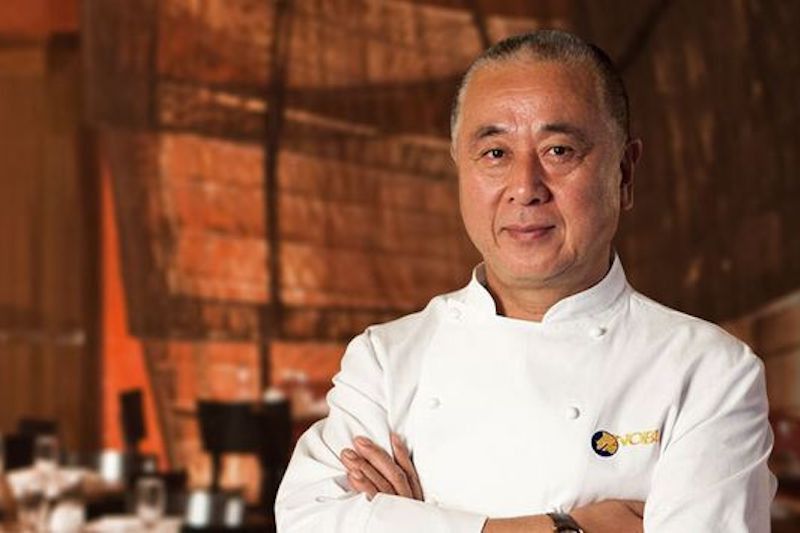 One of the world’s most prolific chefs, Nobu Matsuhisa now has 57 restaurants around the world. He regularly frequents his Dubai hotspot, taking part in meet and greets, cooking alongside some of the world’s top chefs, and hosting celebrity fans such as Jennifer Lopez. Come this November, chef Nobu will add a second Dubai restaurant to his empire, with Nobu by the Beach arriving at Atlantis, The Royal. 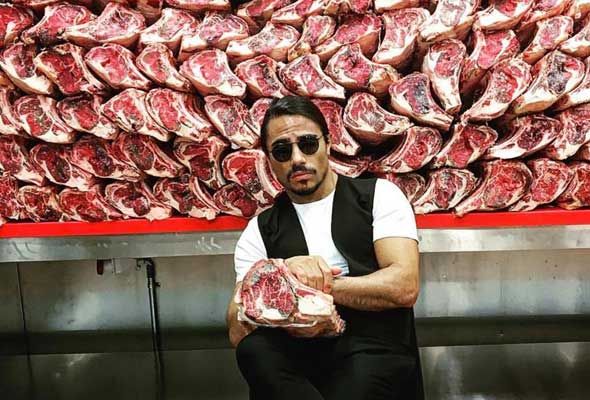 Nusret Gökçe rose to fame in January 2017 after a video of him seasoning meat in his Dubai steakhouse went viral. The video, which earned Nusret his moniker ‘Salt Bae’ was viewed more than 10 million times. After this, the ‘Salt Bae’ sprinkle became a signature move at his Dubai steakhouse, for which you’ll need to book in advance (even when Salt Bae isn’t in the country) if you want to get a table.

Pierre Gagnaire has had an outpost in Dubai for over a decade, first with his restaurant, Relets, and then Pierre’s Bistro & Bar. It’s still serving up some Michelin-worthy modern European dishes, but this time in a more funky, casual setting. He’s also the mastermind behind Abu Dhabi’s Fouquet’s and Paradiso. 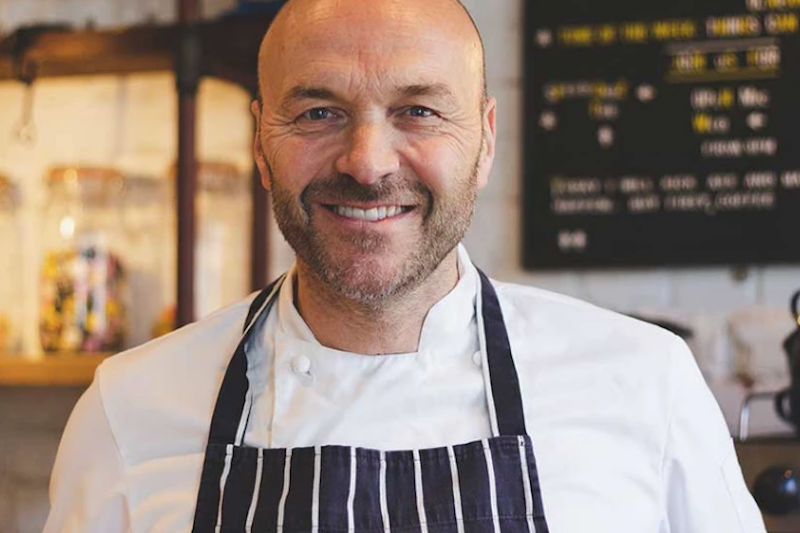 British chef turned TV personality Simon Rimmer opened his Dubai restaurant The Scene by Simon Rimmer seven years ago in the picturesque Dubai Marina. Serving up classic British dishes from morning until late night, it’s a popular spot for everything from full English breakfasts to curry nights. It’s also a favourite with What’s On readers too, having won favourite British restaurant at the What’s On Awards three years in a row. 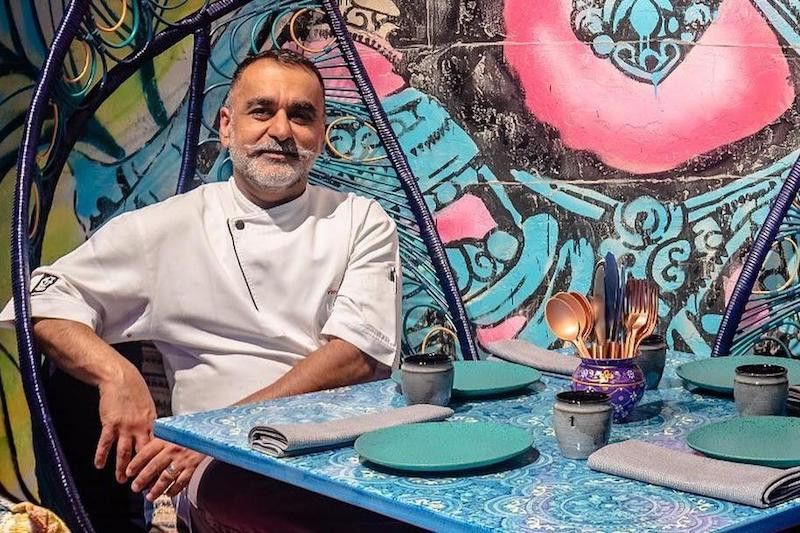 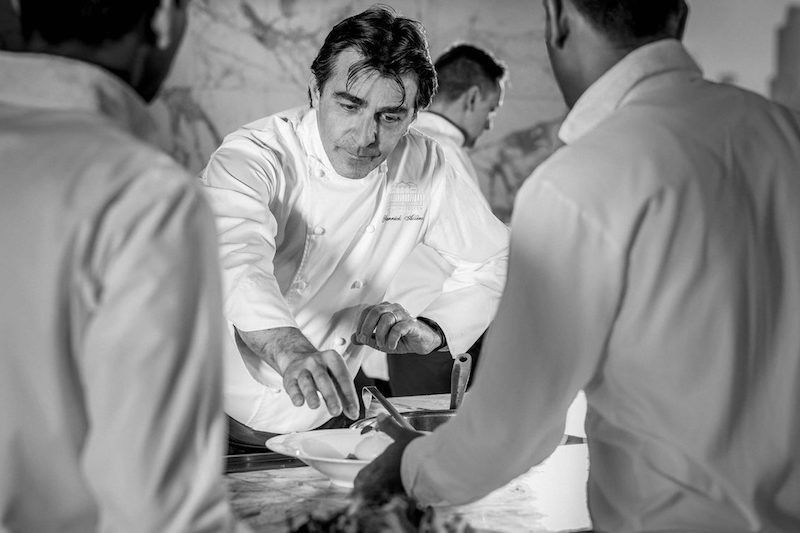 Stay by Yannick Alleno is fine dining at its finest. The French chef was awarded three Michelin stars while chef de cuisine at La Meurice restaurant, which he departed in 2013. His Dubai restaurant at the One&Only on The Palm has been around for more than a decade, and is still regarded as one of the city’s top fine-dining restaurants. It’s also one of only two, two Michelin Star restaurants in Dubai.

The long-awaited Dinner by Heston Blumenthal is scheduled to open when The Royal Atlantis begins welcoming guests towards the end of the year. Expect contemporary dishes inspired by historic gastronomic recipes dating back to the 1300s, including the iconic ‘Meat Fruit’, which looks like a mandarin but is actually made from chicken liver parfait.