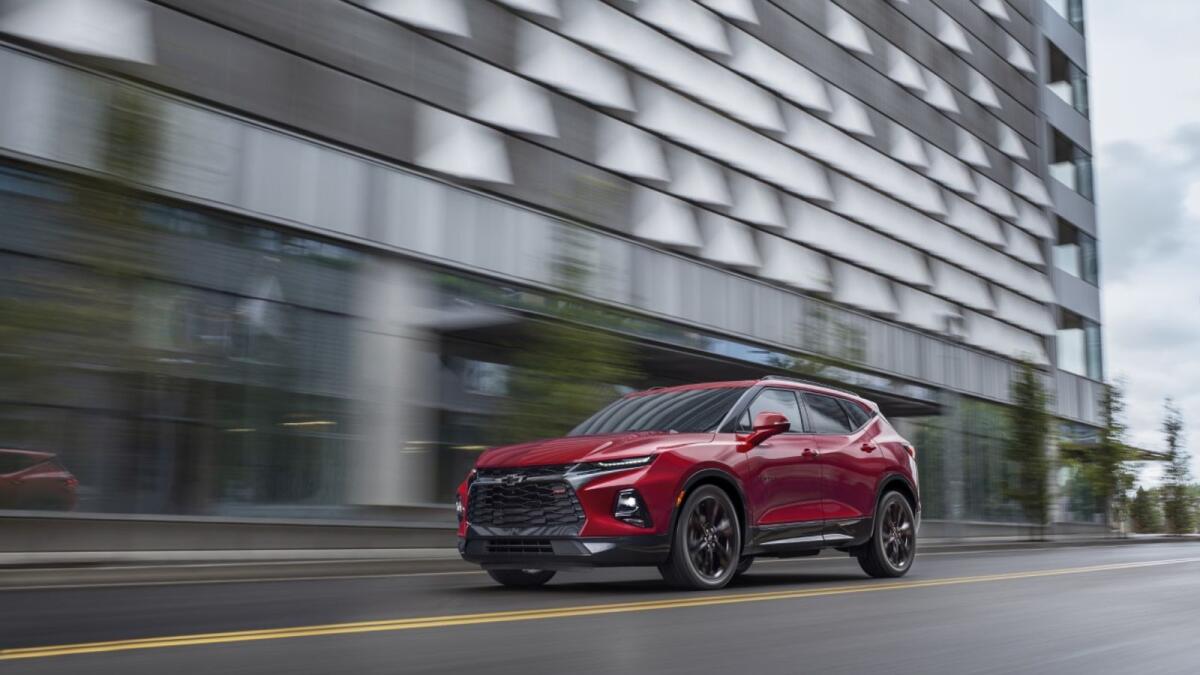 Reviving nameplates of old SUVs is a growing trend in the automotive industry. Ford has brought back the brawny Bronco and Land Rover’s rugged Defender has returned to duty. Alongside these, the brand with the ‘bowtie’ badge has also reintroduced the Blazer.

We got to steer the RS trim of the 2022 Chevrolet Blazer, the sportiest of the lot and these are our thoughts on the vehicle.

1969 was a significant year in human history. Man landed on the Moon and 400,000 people gathered for the Woodstock music festival. It was also the year Chevy chose to roll out their Blazer SUV, one with a tough boxy exterior and even tougher ladder frame chassis, which were design staples of the day.

Over the years, it’s taken on many forms, but that burly Blazer is what it is best remembered for. The current avatar, rebirthed in 2019, is far from that truck-like form and feel. It’s a midsize crossover SUV that fills the gap between Equinox and Traverse with a 2-row monocoque architecture. And the wind-cheating, almost jetfighter-style bodywork draws cues heavily from the Camaro as seen in the frontal design which has a large trapezoidal grille. It also has the sleekest of LED DRLs placed separately over the LED headlamps.

At the rear are arrow-like LEDs reminiscent of those on the Aventador supercar and below them are the RS-specific rectangular exhaust tips to exit the gases from the potent V6. There are also plenty of black-painted parts to up the appeal, including the valances, rocker panels and 21-inch 6-spoke wheels. Even the ‘bowtie’ emblem is black.

The cabin has also been lifted from the Camaro with few deviations. The RS comes with a leatherette-wrapped dash and perforated seats with red piping and red stitching. And there are some dark chrome elements thrown in as well. The 4-spoke steering wheel is a touch too large for something with an RS badge and the visibility through the small Camaro-esque windows isn’t the best, especially out the rear. But worry not! Chevy has equipped the rear mirror with a separate rear camera view.

A relaxed driving posture can be achieved thanks to the power tilt and telescopic functions of the steering column and some credit goes to the 8-way power adjustments too. The circular vents are large and throw good volumes of cool air and the innovative rotating bezels act as controls for the temperature and are so easy to use… yet another Camaro bit.

Tech-wise, we have two 8-inch screens. The instrument cluster gets one flanked by 2 analogue counters and the other is the infotainment screen beautifully encased in a chrome bezel. I like the touch response, the simplicity of the menus and the tactility of the physical buttons. All of this makes the interface as intuitive as a Windows OS — typical Chevy stuff.

And there are other little details that deserve remarks too. For instance, both the starter button and hazard lamp buttons are placed in very accessible locations. And the glove box opens with the touch of a button and can be locked with a pin code. The placement of the wireless charging pad is apt too, but the pad itself was coming off possibly due to the heat. Perhaps, this is a one-off, but Chevrolet isn’t the beacon brand for build quality anyway.

As for accommodations, the Blazer is deceptively large. The rear is spacious enough for three adults even on long drives thanks to the relatively flat floor and the ability to slide the second row by 5.5 inches. And it reclines too! It also has a giant panoramic sunroof which adds to the airiness.

Accompanying that sporty aesthetic is a potent 3.6-litre V6 with DOHC with Variable Valve Timing (VVT) and a 9-speed automatic. The powertrain is set up in such a way, you are armed with incredible throttle response and full-bodied acceleration that pins your back to the seat, much like a Camaro would. The power of 300-plus horses is good for a 0 to 100 km/h dash of under 7 seconds and with plenty of mid-range grunt on tap, it can put a few sports sedans to shame.

Its braking performance is rather commendable as well. Thanks to the large contact patch offered by the large tyres and disc brakes all around (321 mm dia. upfront and 315 mm dia. at the rear) the drill of shredding speed and even coming to full stops were achieved with authority.

But this Blazer doesn’t hit all targets the sporty RS badge aims for. Firstly, it doesn’t have paddle shifters, quite surprisingly. Secondly, Chevy has tuned the suspension (MacPherson struts up front and 5-link type at the rear) for comfort which is good for the tired ride home from work and for the family, but not corner carving. Yes, the chunky P265/45R21 all-season tyres and all-wheel drive try to keep it in line, but the body rolls from side to side under hard cornering. And with low-prof tyres, the low hanging valances (that don’t do approach and departure angles any favours) and the absence of a low ratio gearing mean this SUV is strictly meant for the streets, not the sands. So, the RS is neither a track warrior nor a rugged off-roader, but a speedy crossover with GT qualities.

Fuel economy suffers a little owing to the zippy motor and near-2,000 kg curb weight. The RS averages just about 8 km/l overall. But you can do better if driven with a light foot and a little help from the auto stop/start function (which has a defeat button). If you want it easier on the pocket, opt for LT model with the smaller displacement and FWD setup.

What makes the Blazer such a practical vehicle is the exhaustive feature listing. The remote start is a useful feature, especially in the summer and so are the ventilated (and heated) seats. It is also equipped with 4G LTE Wi-Fi and a decent navigation system as well. And there is a 230V 3-pin outlet in the rear to accompany the A-type and C-type USB ports.

The front console has a similar set of USB ports too. With the RS comes an 8-speaker audio system tuned by masters of sound reproduction Bose and music can be streamed through either of 2 Bluetooth devices that can be hooked up. It also gets voice command and Apple CarPlay and Android Auto.

What comes really ‘handy’ is the gesture-controlled power tailgate which opens the 864-litre boot with a swipe of the foot. And you can gain access to all 1,818 litres by dropping down the seats, large enough to start a mini-delivery company. There is also rail-type luggage management, underfloor storage and a height-adjustable tailgate. And if the delivery package is bigger…like a bunch of quad bikes, jet skis or a boat you can haul that too, thanks to its commendable 2041 kg towing capacity.

There are also plenty of driving aids that let you soak in the bliss of safety, like the 360-degree camera, Forward Collision Alert, Lane Change Alert with Side Blind Zone Alert, Lane Rear Seat Reminder and Rear Cross Traffic Alert. There is also a pin-locked Teen driver mode, which restricts speed and gives a whole report on driving behaviour, which is something helicopter parents will appreciate.

If you are expecting a burly off-roader that harkens back to the original, take note, the Chevrolet Blazer RS will neither drive you down memory lane nor up a sandy dune. But as a city-slicker SUV with ample features and sporty Camaro-esque traits, it will satisfy any family man or woman, especially those who enjoy good amounts of space and pace.

Auto
. The horse is and has been such an integral part of man’s progress