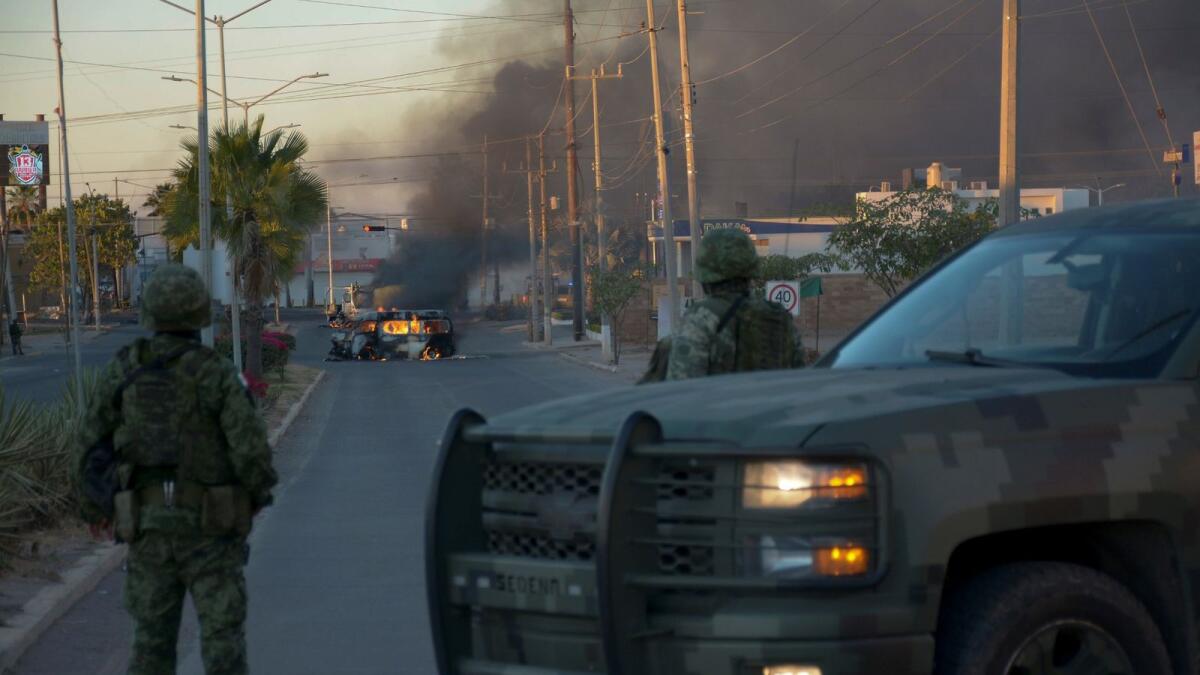 Ten soldiers and 19 suspected criminals were killed in an operation to arrest a son of jailed drug trafficker Joaquin “El Chapo” Guzman, Mexico’s government said Friday, with a dramatic shootout sowing terror at an airport.

Thousands of soldiers retook control of the Sinaloa cartel stronghold of Culiacan, which resembled a war zone after furious gunmen went on the rampage to try to free their boss.

Ovidio Guzman was captured in the northwestern city on Thursday and flown to Mexico City before being transferred to the high-security Altiplano prison in central Mexico from which “El Chapo” escaped in 2015.

The 32-year-old, nicknamed “El Raton” (The Mouse), had allegedly helped to run his father’s operations since the former Sinaloa cartel boss was extradited to the United States in 2017.

A colonel who commanded an infantry battalion was among those killed after his team came under attack following the arrest, Defense Minister Luis Cresencio Sandoval told reporters.

Another 35 soldiers sustained gunshot wounds and were taken to hospital, while 21 gunmen were arrested.

Sandoval said a civilian airliner that was about to take off from Culiacan International Airport, as well as two Mexican Air Force aircraft, were hit as cartel henchmen tried to free Ovidio Guzman.

The military planes “had to make an emergency landing” after receiving “a significant number of impacts,” said Sandoval.

No injuries resulted from the plane attacks and Culiacan airport resumed operations on Friday.

The United States had issued a reward of up to $5 million for information leading to Ovidio Guzman’s capture. It accuses him of being a key player in the Sinaloa cartel founded by his father.

The arrest came as Mexican President Andres Manuel Lopez Obrador prepared to welcome his US counterpart Joe Biden for a North America leaders’ summit next week where security is expected to be high on the agenda.

The drug trafficker’s detention was “not an insignificant accomplishment by Mexican authorities,” US National Security Council spokesman John Kirby said.

“And we’re certainly grateful for that,” he said, adding that the United States would keep working “in lockstep” with Mexico, notably to tackle trafficking of the powerful synthetic opioid fentanyl.

Mexico denied that the United States had been involved in the operation to catch Ovidio Guzman.

“We act autonomously, independently. Yes there is cooperation and there will continue to be, but we make the decisions as a sovereign government,” Lopez Obrador told reporters.

He said calm had returned to Culiacan, where security forces removed dozens of stolen and burnt out vehicles scattered throughout the city of 800,000 people.

El Chapo is serving a life sentence in the United States for trafficking hundreds of tons of drugs into the country over the course of 25 years.

However, his cartel remains one of the most powerful in Mexico, accused by Washington of exploiting an opioid epidemic by flooding communities in the United States with fentanyl, a synthetic drug about 50 times more potent than heroin.

Ovidio Guzman and one of his brothers are accused of overseeing nearly a dozen methamphetamine labs in Sinaloa as well as conspiring to distribute cocaine and marijuana, according to the US State Department.

Ovidio Guzman also allegedly ordered the murders of informants, a drug trafficker and a Mexican singer who refused to perform at his wedding, it said.

He was captured briefly once before in 2019, but security forces freed him after his cartel waged an all-out war in response.

His release prompted sharp criticism of Lopez Obrador, who said the decision was made to protect civilians’ lives.

Foreign Minister Marcelo Ebrard has played down the prospects of a fast-track extradition, saying Ovidio Guzman was expected to face legal proceedings in Mexico.

Mexico has registered more than 340,000 murders since the government controversially deployed the army to fight drug cartels in 2006, most of them blamed on criminal gangs.