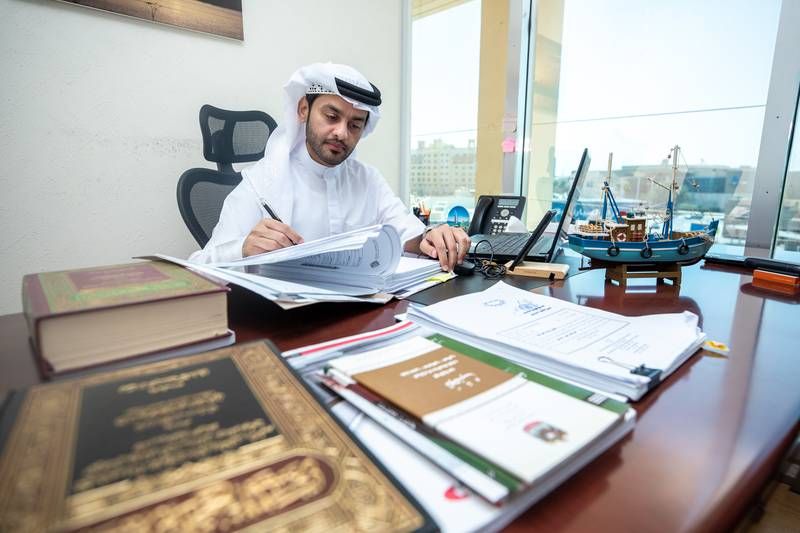 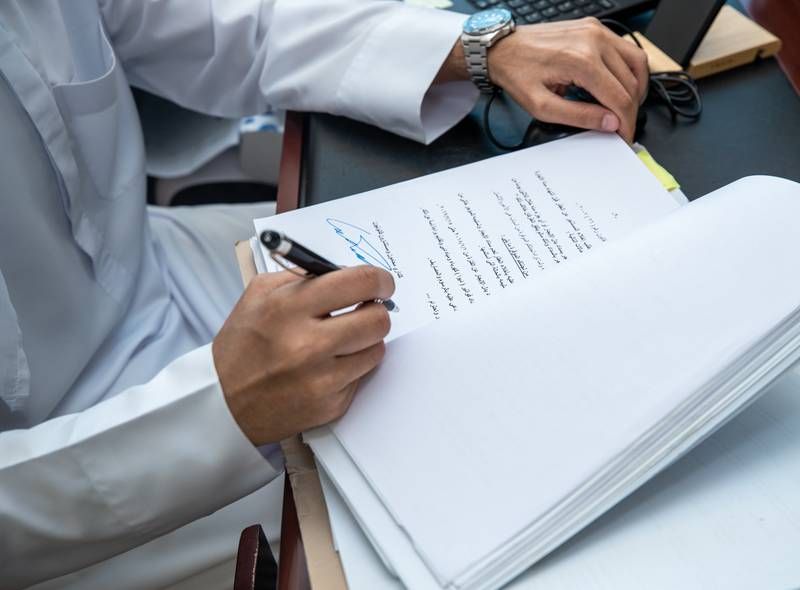 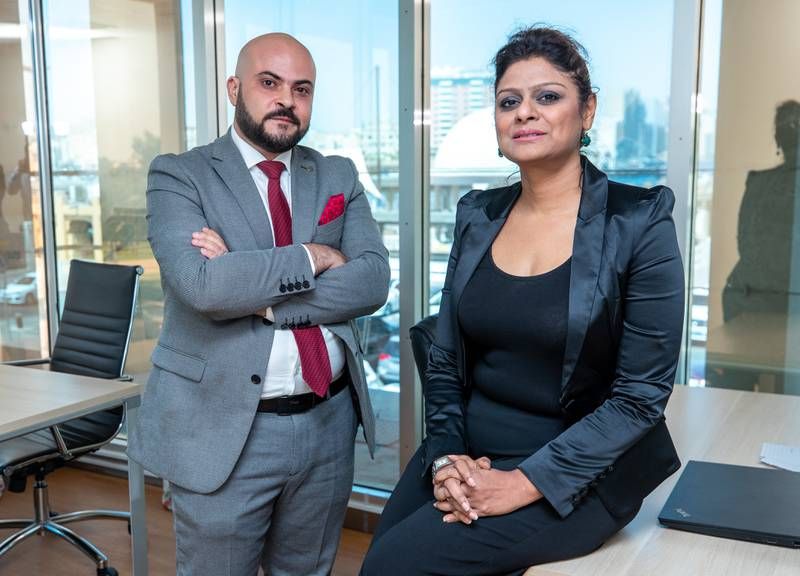 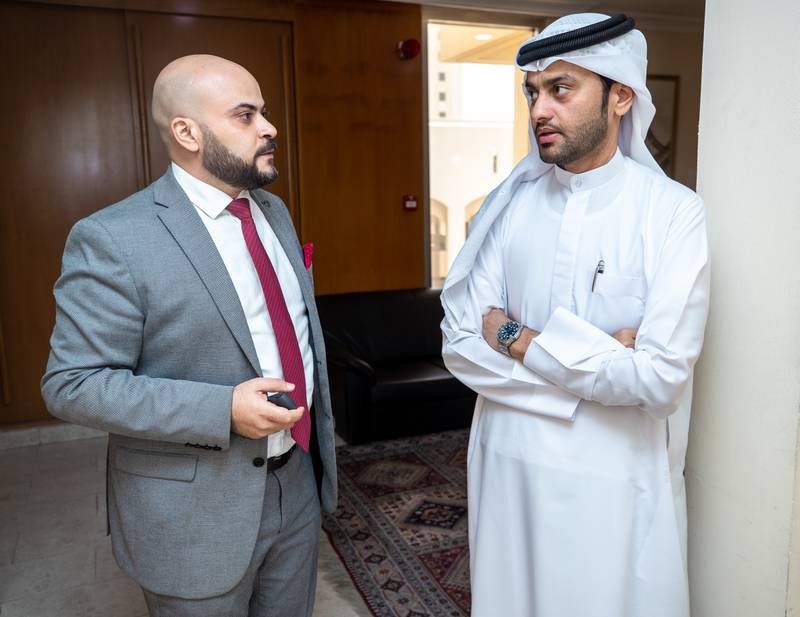 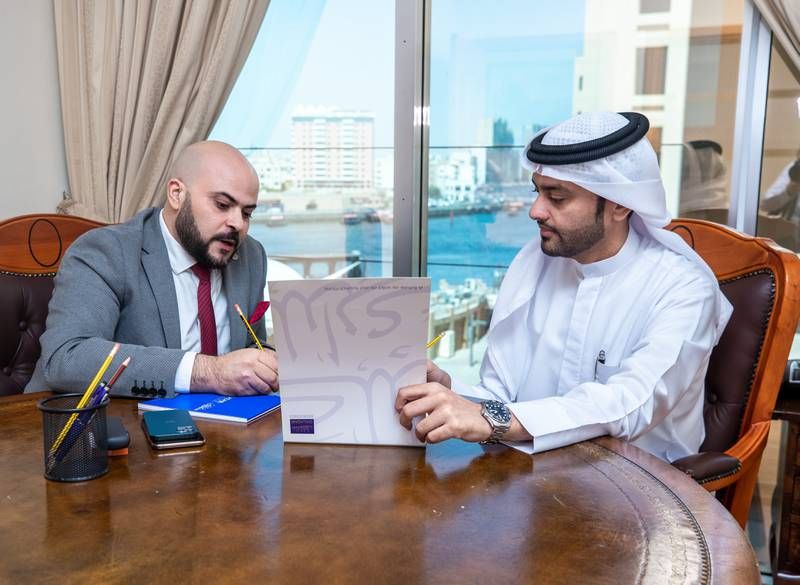 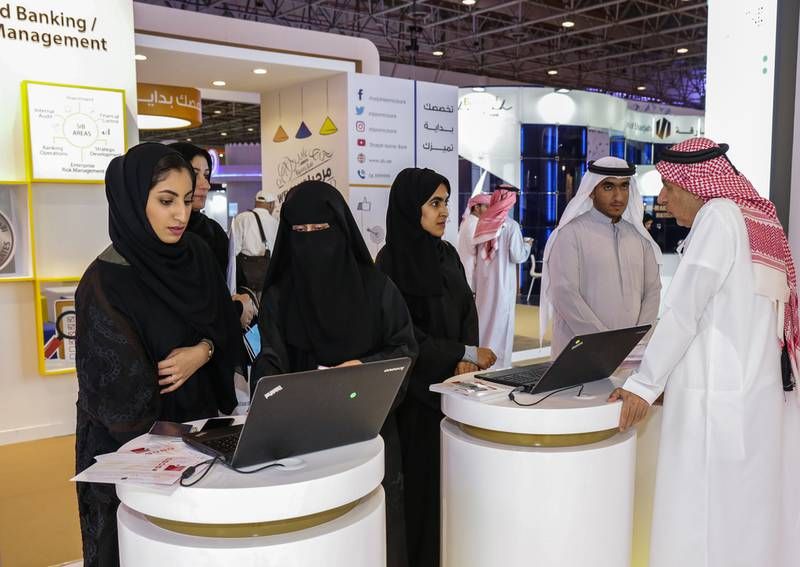 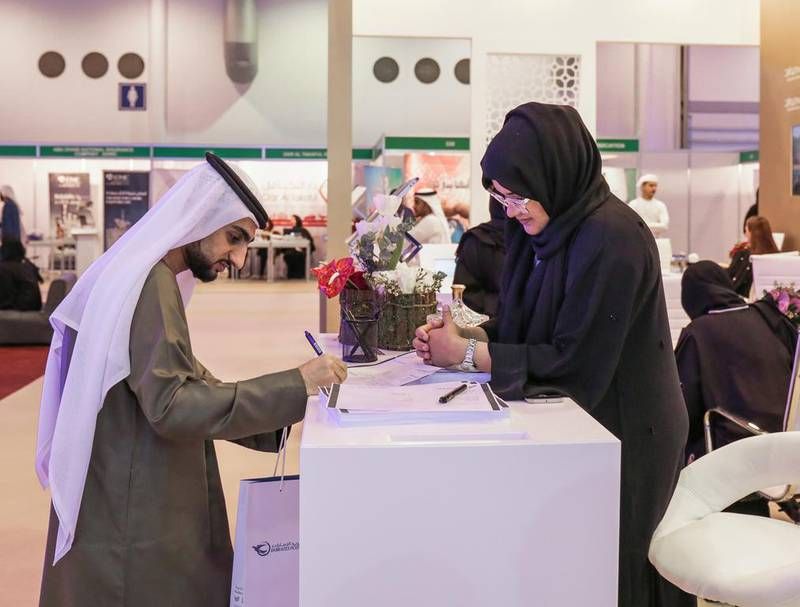 Rashed Abdulla Al Sumaity, an associate at Galadari Advocates & Legal Consultants in Dubai. The legal and banking professions have the highest Emiratisation in the private sector. All photos by Victor Besa / The National

Recent government announcements of social support for Emiratis and punitive measures against the private sector where it falls short of hiring UAE nationals indicate authorities want companies to step up, experts say.

The measures illustrate the government’s resolve to encourage citizens to join the private sector and persuade companies to take Emiratis on board, they told The National.

In September 2021, the Nafis initiative set a target of getting 75,000 Emiratis in to private sector jobs in five years.

QuoteWhen a country gives you opportunities, it has the right to ask this from businessesRaka Roy, partner at Galadari Advocates & Legal Consultants

This month the UAE Cabinet decreed that companies with more than 50 employees should have a 2 per cent Emirati workforce by next year, moving up to 10 per cent by 2026.

A company that fails to reach the target must pay Dh6,000 a month for every Emirati it fails to hire.

“The government wants to make it clear they are serious about Emiratisation,” said Raka Roy, partner at Galadari Advocates & Legal Consultants.

“Punitive measures are not something we have seen earlier.

“The figures on Emiratisation may not be encouraging enough, so making it mandatory and backing it up with a fine will ensure implementation.” 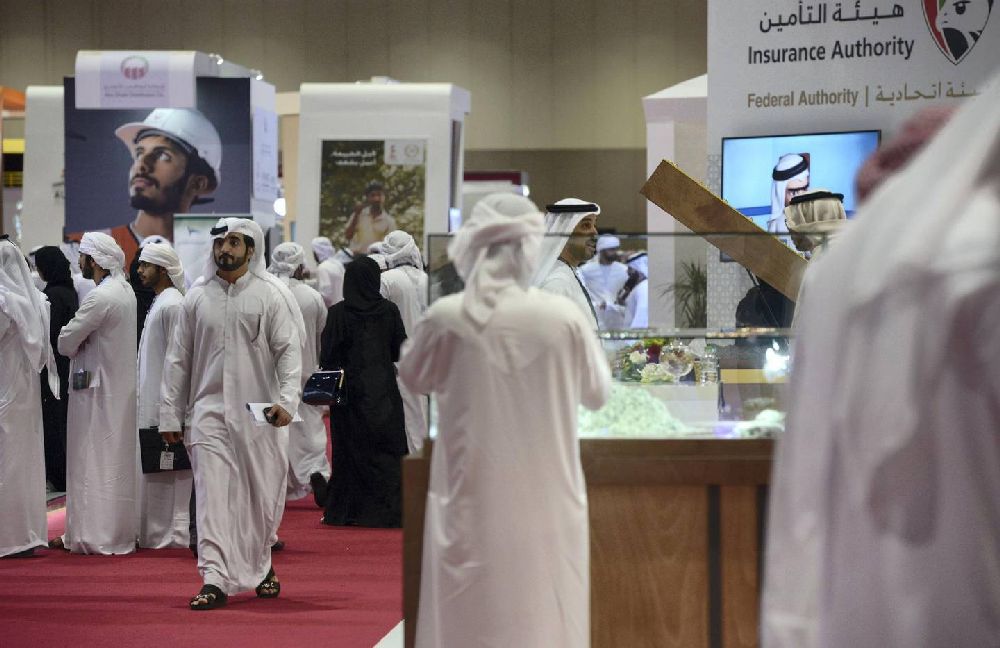 The goal is to create more than 12,000 jobs annually for UAE citizens in all economic sectors. Khushnum Bhandari / The National

The legal and banking sectors and large family businesses have the highest Emiratisation rates across the private sector, said Hamza Zaouali, founder of Iris Executives, which specialises in the placement of UAE nationals. He said fines would ensure compliance.

“Being the oldest Emiratisation headhunting firm, we have witnessed first-hand how most of the private sector has been reluctant and anxious about hiring Emiratis,” Mr Zaouali said.

“With these new incentives, the private sector and the Emirati workforce are going to finally have to learn to work together in a sustainable way.

“As an employer myself, I can tell you that such a penalty will work.”

The programme is being implemented through Nafis, a federal scheme that prioritises integrating Emiratis into the private sector.

One highlight is the 2 per cent Emirati staff goal for private companies by next year.

“What they are saying is for every 50 employees there should be one Emirati employee and if this structure is not reached by January 2023 cut off, there will be a Dh6,000 fine,” Ms Roy said.

“If you have 100 employees, the mandatory requirement is of two Emiratis at least or you will pay Dh12,000 as a monthly fine. Such companies will bear fines of Dh144,000 over the year.”

The Ministry of Human Resources and Emiratisation said the Dh6,000 fine would be increased by Dh1,000 every year until 2026.

Ms Roy said there was a link between the levy and the support announced for young Emiratis.

“This money will empower unemployed Emiratis,” she said. “The thinking is well connected. If you cannot give a job to an Emirati, then you need to pay a fine. It’s about the same amount as the monthly support for a fresh Emirati graduate or someone in training.”

Salary assistance was announced last year for fresh Emirati university graduates and those in training.

This includes a monthly stipend of Dh5,000 for up to five years for Emirati university graduates.

There is also one-year salary support of up to Dh8,000 a month for skilled Emiratis undergoing training.

Free trade zones are economic areas with preferential tax and customs rates. So far, companies in free zones have been exempt from the requirement of hiring Emiratis.

Lawyers said clarification was awaited on whether the new policies would apply across the country.

“My hope is that companies in various free zones will also be included in this new incentive, in order to not create loopholes for companies to avoid the change,” Mr Zaouali said.

Fixed monthly salary support for Emiratis working as nurses, accountants, auditors and software programmers, among other professions, will be offered.

“This is a step forward to encourage UAE citizens to apply for jobs in specialised fields in the private sector like software, nursing and accounting,” said Eslam Oraif, legal counsel at the Galadari legal firm.

“The government is asking UAE citizens to go ahead and apply for these jobs and, if they get hired, the government will offer an incentive to top up their salary.

“Such jobs in the private sector are populated with non-Emiratis,” he said. 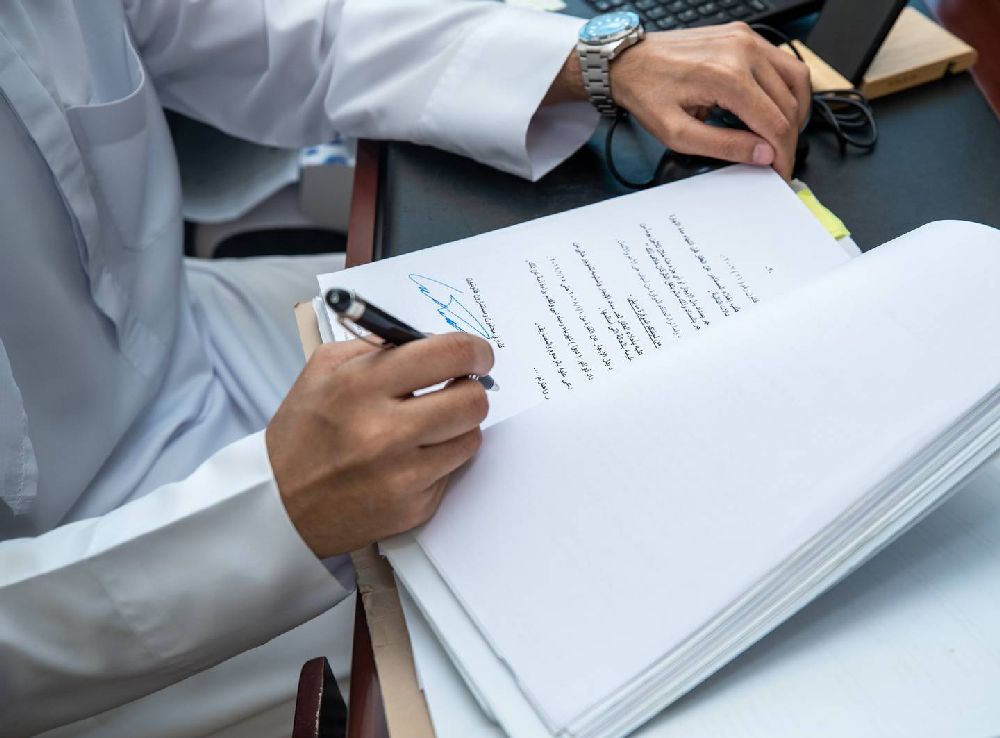 Redundancies are more frequent in the private sector and the government aims to protect Emiratis.

The latest mandatory social support programme will give security to Emirati and residents in the private and public sectors, so employees who lose their jobs get a cash payment each month for a fixed period.

Under the Nafis programme, Emiratis get financial support for up to six months to look for a job in case of “an involuntary job loss in the private sector”.

Mr Oraif said any Emirati employee in the private sector made redundant would get an unemployment benefit.

He said a provision in UAE law 212 of 2018 states the assistance would be lower if the employee was sacked due to negligence.

“There is a difference in the support given to an Emirati who was arbitrarily made redundant due to an economic situation compared with somebody who has lost his or her job because they were negligent,” Ms Roy, of Galadari Advocates, said.

“The first case is genuine and the second will not get as much benefit. It’s important for people to know that logic is applied and you have to qualify for the support.”

There is an allowance of Dh800 for a child that goes up to a maximum of Dh3,200 a month for the family.

“This is similar to social security laws of many European countries — that is what the government is trying to do here,” Ms Roy said.

“It’s in line with child support packages given to families in mature economies.”

The government will take on the pension fund contribution for UAE employees in the private sector for five years and bear the bulk of an employer’s contribution to an Emirati’s retirement fund during the first five years.

Details are awaited on pension benefits.

The aim is to create more than 12,000 jobs annually for UAE citizens in all economic sectors.

Private companies that recruit and train Emiratis are eligible for an 80 per cent reduction on fees charged by the Ministry of Human Resources and Emiratisation for its services.

With expatriates far outnumbering UAE nationals, Ms Roy said it was time to balance the field.

“When a country gives you opportunities, it has the right to ask this from businesses,” she said.

“The UAE opens its arms to all nationalities who take this country as a second home. It is a unique nation where more than 80 per cent of the population is expatriate so unless the government takes up such schemes, for sure there will be an imbalance.

“Every country will look at the betterment of their own nationals.”

Mr Zaouali too said the measures were essential.

“The new programme is both more aggressive towards Emiratisation in the private sector and more supportive to private companies — offering extra salary and extra benefits to their Emirati employees — which is a great step in making private companies as attractive as the government sectors,” he said.

Yogi dubbed the mystic on a motorbike has a mission to avert famineExpandAutoplayIndian spiritual leader Sadhguru is on a 100-day journey from the UK to India to raise awareness about the urgent...