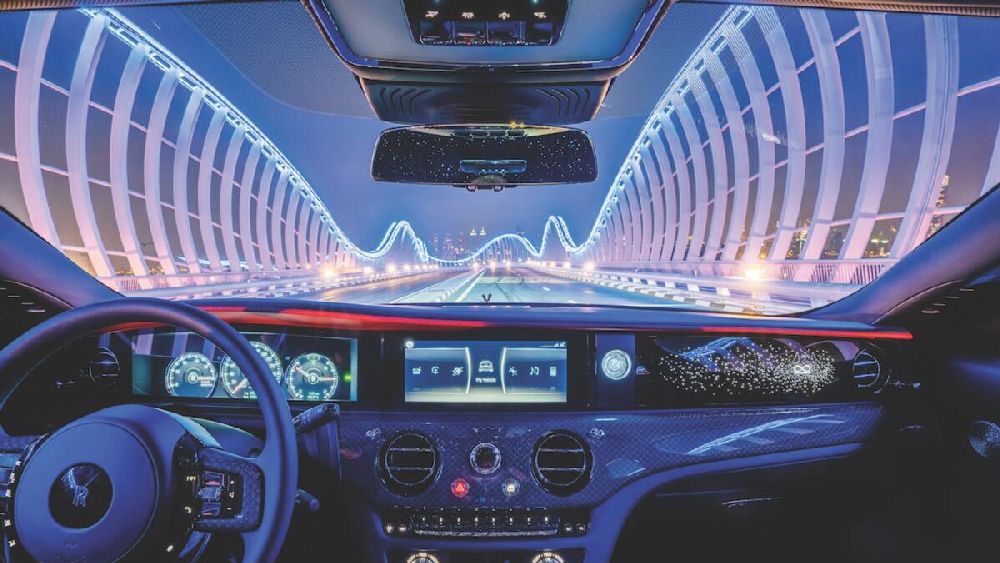 In those upper strata of society, where individuals revel in luxury goods and frequent staycations, the preferred choice of personal transportation usually comes from only a handful of companies, Rolls-Royce being one among them.

A few days ago, we got a glimpse of the rich superfluous lifestyle when we were invited to drive the all-new and second-generation Rolls-Royce Ghost. And not just any Ghost, this was the Black Badge variant. For those who can’t differentiate, let me explain. The Ghost is a luxurious super sedan that dwarfs almost every other 4-door vehicle on the roads today, except for the big daddy Rolls-Royce Phantom and a few others. And it costs upwards of a million and a half bucks. The Black Badge is the “highly successful alter ego of Rolls-Royce”, which also represents the sportier versions of the world’s comfiest cars. Rolls-Royce debuted the Black Badge with Wraith and Ghost in 2016, followed by Dawn in 2017 and then Cullinan in 2019. It now represents more than 27 per cent of commissions worldwide with more than 3,500 units sold.

My experience began at the Rolls-Royce Boutique located in City Walk. It is a venue for potential buyers and enthusiasts to come check out a finely curated selection of Rolls-Royce Motor Cars and their many customisations in the flesh. Parked outside the boutique was a selection of six unique Ghost Black Badge vehicles.

I chose to steer one with the posh grey exterior and regal purple interior. The one in red pictured here was also a beauty to behold, especially under the mid-day sun. It is also worth noting that Rolls-Royce started the sub-brand offering black as the sole choice for exterior paint. Now, customers are free to select any of the marque’s 44,000 ‘ready-to-wear’ colours or create their own hue. However, the majority of customer prefer the Black.

Visually, thanks to its overwhelming size and stylistic idiosyncrasies, the Rolls-Royce Ghost looks like a large metallic yacht — a ship for the street, so to say. The very vertical front fascia is as imposing as ever with its gargantuan Pantheon grille. The grille itself has a story of its own. The chrome plate is co-deposited on the stainless-steel substrate — one micrometre thick — which is polished by hand to give that black chrome finish. And the vehicle fuselage that follows the front end tapers gently to the rear. That silhouette together with the large and unique composite 21-inch wheels create a very stately coach befitting of any dignitary… or in today’s world, any kid that has made it big on social media.

When I climbed aboard, the first thing I noticed is how spacious and tastefully embellished the cabin is — all of the qualities that spell ‘rich’. And there are almost no plastic parts in sight… or perhaps they have done a spectacular job of hiding them. The seats are plush like a La-Z-Boy but with more support for your back and bottom, and the high-pile carpets are like planting your feet in a lush meadow somewhere. That soft upholstery that you feel on the old-fashioned thin-rimmed steering wheel is seen everywhere else too, even on the roof and door panels. The piece de resistance, however, is the Shooting Star Headliner that mimics the starry night sky which keeps the cabin well-lit. Rolls-Royce allows you to customise these LEDs to suit your star sign. As for the rear quarters, it is even more accommodating than the front cabin and is probably the second best place to read a newspaper, if you know what I mean.

As I adjust my posture and settle in, I notice other charming elements as well. Like the stainless steel air vents for which you can adjust airflow via the metallic organ pulls. And nestled between the large digital instrument cluster is a BMW-sourced infotainment screen, the menu of which can be controlled via the rotary controller on the lower console. And sitting right next to this screen is a quaint analogue clock — a true marriage of technology and tradition.

It came as no surprise that with a 6.75-litre V12 under the hood, the Ghost was not going to be a slouch. And the Black Badge adds some extra oomph. It now makes an extra 29 horses for a total output of 600 PS. Maximum torque also gets a bump — the 50 Nm of twist bring the sum to 900Nm. These are supercar numbers in a family sedan, if you missed the point.

In our hour-long drive to Point A, traffic was heavy and we played it easy with the throttle. But every time the roads cleared, I opened the throttle and felt my body pushed against the seat as the Ghost sped forward with such urgency. And it does it with such poise you don’t feel like you’ve been thrust into engine room of a ship. The refinement is unparalleled!

Also noteworthy is the sonorous growl of the V12 which I welcomed every time I put the pedal to the metal. The Black Badge adds a ‘Low’ button, which much like a Sport mode, unlocks a few surprises like amplified engine noise — through an entirely new exhaust system — and hasted gearshifts, which are speedier by 50 per cent when the throttle is depressed to 90 per cent. We got a taste of both these qualities on a makeshift drag strip.

They also put us through a slalom to test the car’s dynamic abilities. The Ghost is far from the corner carving specialist set of wheels, but it was never intended to be so. What we can say is that this Black Badge variant is a lot more agile than the last generation. The turn-ins are smooth and the body rolls are evident, but predictable and controllable. The rear-steered axles also help with the change of direction.

On our drive back from point A, I started to appreciate the things money can buy and acknowledge the liabilities that come with it. The Rolls-Royce Ghost Black Badge has the kind of power that will get you anywhere in a hurry, the quietness of the well-insulated interior gives space for your thoughts, and the mix of exquisite natural and man-made materials that populate the cabin make the travelling experience all the more special. And this differential became more evident when I stopped, handed over the keys and jumped into my own temporary rental vehicle. But of course, with a car like the Ghost, comes the burden of hefty price tag, a larger insurance rate and the anxiety that someone will spoil the beautiful paint by opening a car door on it.