A strong dollar is wreaking havoc on emerging markets. A debt crisis could be next 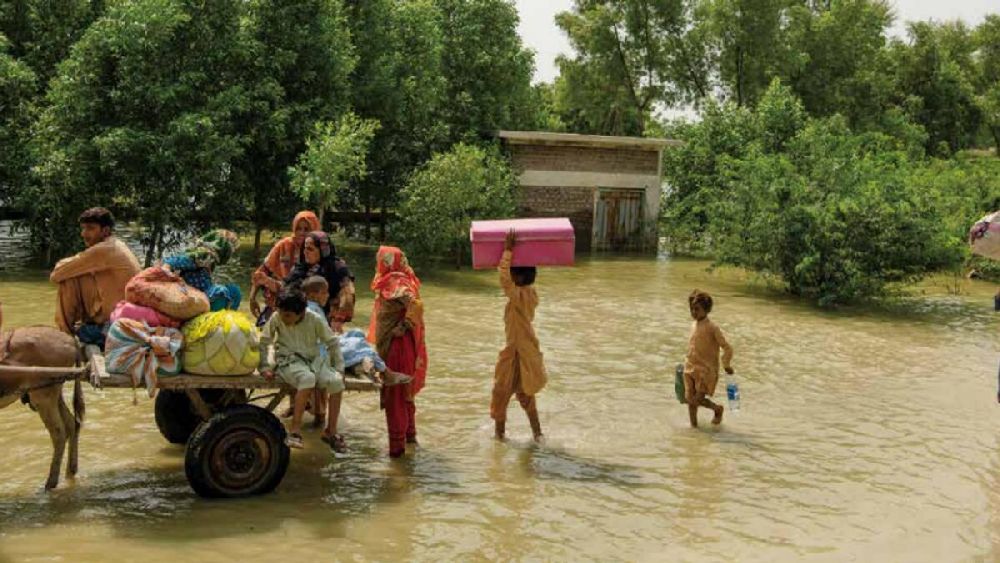 The average household in Ghana is paying two-thirds more than it did last year for diesel, flour and other necessities. In Egypt, wheat is so expensive that the government has fallen half a billion dollars short of its budget for a bread subsidy it provides to its citizens. And Sri Lanka, already struggling to control a political crisis, is running out of fuel, food and medical supplies.

A strong dollar is making the problems worse.

Compared with other currencies, the US dollar is the strongest it has been in two decades. It is rising because the Federal Reserve has increased interest rates sharply to combat inflation and because America’s economic health is better than most. Together, these factors have attracted investors from all over the world. Sometimes they simply buy dollars, but even if investors buy other assets, like government bonds, they need dollars to do so — in each case pushing up the currency’s value.

That strength has become much of the world’s weakness. The dollar is the de facto currency for global trade, and its steep rise is squeezing dozens of lower-income nations, chiefly those that rely heavily on imports of food and oil and borrow in dollars to fund them.

“We are living in a world with little fires everywhere,” said Mohamed El Erian, president of Queens’ College, part of Cambridge University, and former CEO of Pimco, a $2 trillion bond manager. “If we don’t pay attention, these little fires could become much bigger.”

Higher food and energy costs resulting from Russia’s war with Ukraine were already hurting some emerging-market countries. The rising dollar, whose strength is measured against a basket of currencies representing America’s major trading partners, has exacerbated those problems by making it even more expensive to import vital commodities using weaker currencies.

A strong dollar forces countries to use more of their own currency to buy the same quantity of goods. That higher price means they are inadvertently importing more inflation along with their grain and fuel. And because they borrow in dollars, they have to pay interest in dollars, which adds to their financial distress.

Some countries are already in default. Others are teetering on the brink. A sovereign debt crisis could soon spread, derailing the fragile recovery from the pandemic and amplifying the likelihood of a severe global downturn.

“Things are looking a little shaky at the moment,” said Leland Goss at the International Capital Markets Association, a trade body. “There does seem to be a consensus that we could face for the first time in a while not one but a whole raft of countries going into restructurings.”

Four emerging-market countries have defaulted on their debts so far this year, according to S&P Global Ratings: Russia, Sri Lanka, Belarus and Ukraine. Another 10 countries are in “severe stress”: Argentina, Lebanon, Ghana, Suriname, Zambia, Ethiopia, Burkina Faso, Congo-Brazzaville, Mozambique and El Salvador, according to the ratings agency. Of the 94 emerging-market sovereigns S&P rates around the world, over one-quarter rank as B-minus, a low-quality rating indicative of a high-risk investment.

The bleak situation is part of the collateral damage from Russia’s war with Ukraine and the Fed’s fight against inflation, and it highlights the global connections that have left the fate of countries around the world inextricably linked to decisions made in Moscow and Washington, D.C.

“We are in a fragile situation,” El Erian said. “Country after country is flashing amber, and some are already flashing red.”

Many lower-income countries were already struggling during the pandemic.

Roughly 22 million people in Ghana, or one-third of its population, reported a decline in their income between April 2020 and May 2021, according to a survey from the World Bank and Unicef. Adults in almost half of the households with children surveyed said they were skipping a meal because they didn’t have enough money. Almost three-quarters said the prices of major food items had increased. 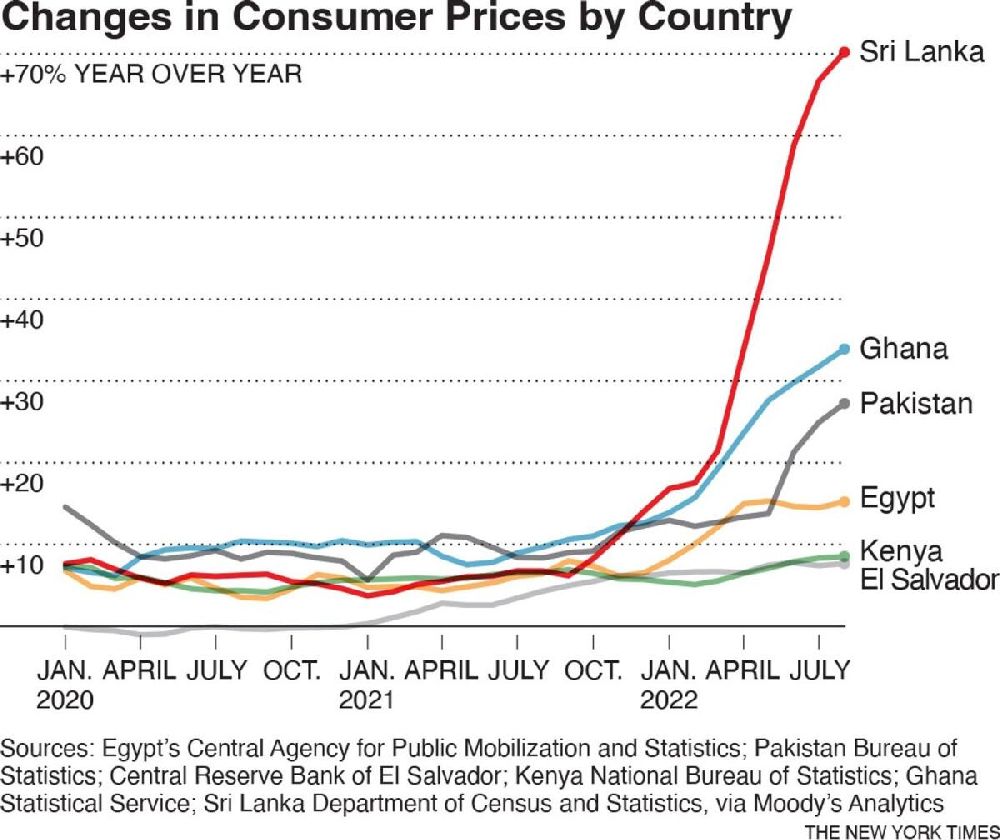 Then came Russia’s invasion of Ukraine. The war between two of the world’s largest exporters of food and energy led to a big surge in prices, especially for importers like Ghana. Consumer prices have gone up 30 per cent for the year through June, according to data from the research firm Moody’s Analytics. For household essentials, annual inflation has reached 60 per cent or more this year, the S&P data shows.

To illustrate this, consider the price of a barrel of oil in dollars versus the Ghanaian cedi. At the beginning of October last year, the price of oil stood at $78.52 per barrel, rising to nearly $130 per barrel in March before falling back to $87.96 at the beginning of this month, a one-year increase of 12 per cent in dollar terms. Over the same period, the Ghanaian cedi has weakened more than 40 per cent against the dollar, meaning that the same barrel of oil that cost roughly 475 cedi a year ago now costs more than 900 cedi, almost twice as much.

Adding to the problem are large state-funded subsidies, some taken on or increased through the pandemic, that are now weighing on government finances.

In Egypt, spending on what the government refers to as “supply commodities,” almost all of which is wheat for its long-running bread subsidy, is expected to come in at around 7 per cent of all government spending this year, 12 per cent higher — or more than half a billion dollars — than the government budgeted.

As costs ballooned throughout the pandemic, governments took on more debt. Ghana’s public debt grew to nearly $60 billion from roughly $40 billion at the end of 2019, or to nearly 80 per cent of its gross domestic product from around 63 per cent, according to Moody’s.

It’s one of four countries listed by S&P, alongside Pakistan, Nigeria and Sri Lanka, where interest payments alone account for more than half of the government’s revenues.

“We can’t forget that this is happening on the back end of a once-in-a-century pandemic in which governments, to try and support families as best they could, did borrow more,” said Frank Gill, an analyst at S&P. “This is a shock following up on another shock.”

In May, Sri Lanka defaulted on its government debt for the first time in its history. Over the past month, the governments of Egypt, Pakistan and Ghana have all reached out to the International Monetary Fund for a bailout as they struggle to meet their debt-financing needs, no longer able to turn to international investors for more money.

“I don’t think there is a lot of appetite to lend money to some of these countries,” said Brian Weinstein, co-head of credit trading at Bank of America. “They are incredibly vulnerable at the moment.”

That vulnerability is already reflected in the bond market.

In 2016, Ghana borrowed $1 billion for 10 years, paying an interest rate of more than 8 per cent. As the country’s financial position has worsened and investors have backed away, the yield — indicative of what it would now cost Ghana to borrow money until 2026 — has risen to above 35 per cent.

It’s an untenable cost of debt for a country in Ghana’s situation. And Ghana is not alone. For bonds that also mature in 2026, yields for Pakistan have reached almost 40 per cent.

“We have concerns where any country has yields that calls into question their ability to refinance in public markets,” said Charles Cohen, deputy division chief of monetary and capital market departments at the IMF.

The risk of a sovereign debt crisis in some emerging markets is “very, very high,” said Jesse Rogers, an economist at Moody’s Analytics. Rogers likened the current situation to the debt crises that crushed Latin America in the 1980s — the last time the Fed sought to quell soaring inflation.

Already this year, more than $80 billion has been withdrawn from mutual funds and exchange-traded funds — two popular types of investment products — that buy emerging-market bonds, according to EPFR Global, a data provider. As investors sell, the United States is often the beneficiary, further strengthening the dollar.

“It’s by far the worst year for outflows the market has ever seen,” said Pramol Dhawan, head of emerging markets at Pimco.

Even citizens in some of these countries are trying to exchange their money for dollars, fearful of what’s to come and of further currency depreciation — yet inadvertently also contributing to it.