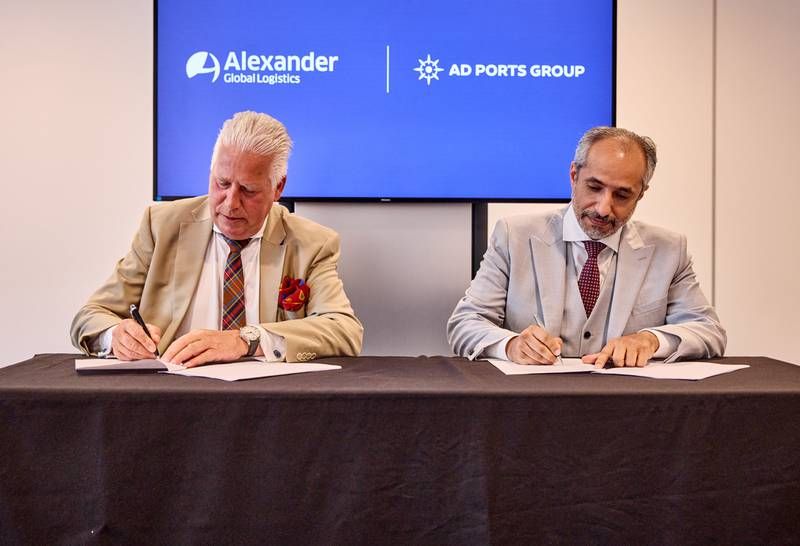 AD Ports Group and Germany’s Alexander Global Logistics have signed an agreement to set up a trans-shipment centre for handling pulp and paper products that will operate from Khalifa Port.

The first phase is expected to be completed in the third quarter of this year, featuring a total of 20,000 square metres of quayside warehousing, AD Ports Group said in a statement on Monday.

Once complete, the first phase will enable all kinds of forestry products to be distributed into the Gulf region and beyond.

The move will support the UAE’s industrialisation efforts and is also “the first step in what we see as Abu Dhabi’s transformation into a regional leader for pulp and paper products”, said Saif Al Mazrouei, chief executive of Ports Cluster, AD Ports Group.

“The hub aims to address the changing needs of the global supply chain, both for pulp and paper producers and customers.”

The size of the pulp and paper market in the Middle East and Africa is expected to grow at a compound annual growth rate of 3.2 per cent between 2021 and 2026, Mordor Intelligence has predicted.

Growth is being driven by an increase in consumer demand for packaged and fresh food and, in turn, paper packaging, it said.

Alexander Global Logistics is an independent logistics service provider headquartered in Bremen, whose main business is the transport and handling of pulp and paper products, its website says.

It also manages more than 550 square kilometres of industrial zones and an end-to-end logistics business, besides offering maritime services.

AD Ports has signed several agreements to expand the capabilities at Khalifa Port to support a variety of industries.

In 2021, it signed a 50-year land lease agreement with Anchorage Investment to develop a grain storage and processing plant at Khalifa Port that will be overseen by agro commodity processor National Feed.

Work on Abu Dhabi’s first greenfield commercial bulk liquid storage terminal at the port, which is being built as part of an agreement signed with Saudi Arabia-based Arabian Chemical Terminals, is also under way, the company said.