There are two shows to catch every evening until January 29…

The epic show takes place at Bluewaters and The Beach opposite JBR and runs until January 29 with two shows taking place daily at 7pm and 10pm (except New Year’s Eve when the shows will take place at 8pm and 11pm).

Please note: today’s drone show (Tuesday, December 27) is cancelled due to unforeseen weather circumstances. Before heading, make sure to check the website on the day for any updates: visitdubai.com 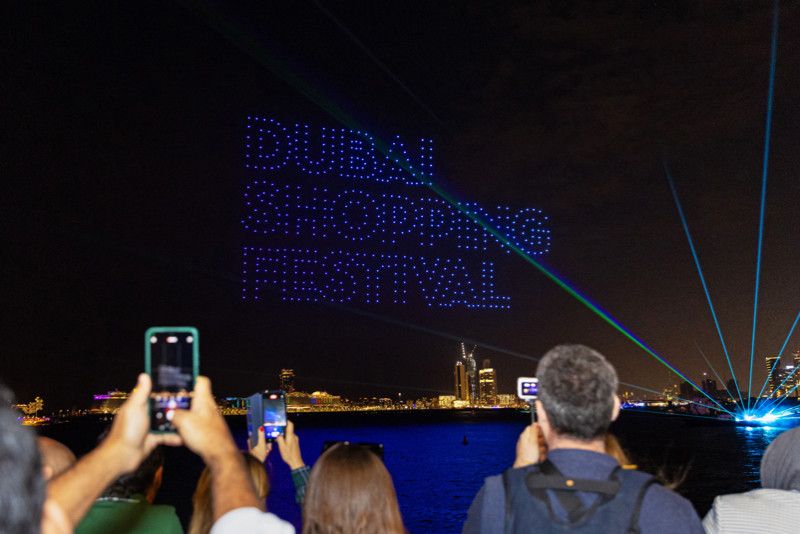 The 3D production cleverly illustrates the story of Dubai, with the help of cutting-edge technology including AR headsets, 500 drones, and two pilots.

The first show is inspired by a day in the life of a tourist in Dubai, taking viewers on a journey from landing at the airport to exploring the city’s iconic sites. While the second show – Future of Dubai – gives the audience a glimpse into Dubai in the year 2040.  Each show lasts around five minutes long.

What else to expect from DSF…

With over 800 brands participating across 3,500 outlets, there will be offers of up to 25 per cent to 75 per cent reductions throughout the seven weeks of fun. DSF will also be holding daily shopping surprises, revealed 24 hours before they go live.

The Beach opposite JBR and Bluewaters, daily until January 29, 7pm and 10pm, free. visitdubai.com