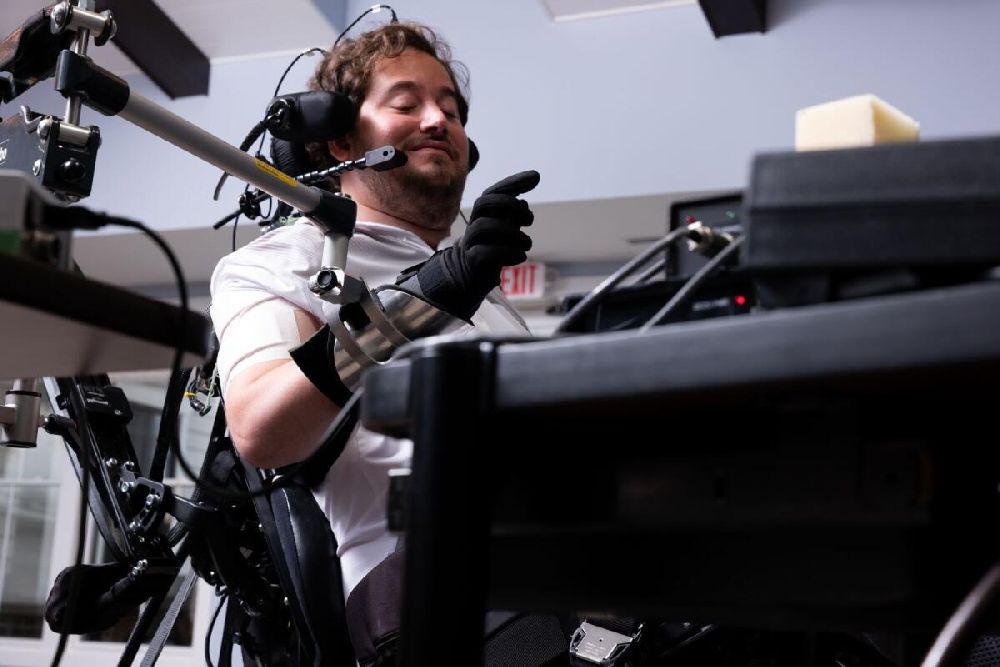 A jumble of cords and two devices the size of soda cans protrude from Austin Beggin’s head when he undergoes testing with a team of researchers studying brain implants meant to restore function to those who are paralysed.

Despite the cumbersome equipment, it is also when Beggin feels the most free. He was paralysed from the shoulders down after a diving accident eight years ago, and the brain device picks up the electrical surges that his brain generates as he envisions moving his arm. It relays those signals to cuffs on the major nerves in his arm. They allow him to do things he had not done on his own since the accident, like lift a pretzel to his mouth.

“This is like the first time I’ve ever gotten the opportunity or I’ve ever been privileged and blessed enough to think, ‘When I want to open my hand, I open it,’” Beggin, 30, said. Days like that are always “a special day.”

The work at the Cleveland Functional Electrical Stimulation Center represents some of the most cutting-edge research in the brain-computer interface field, connecting the brain to the arm to restore motion. 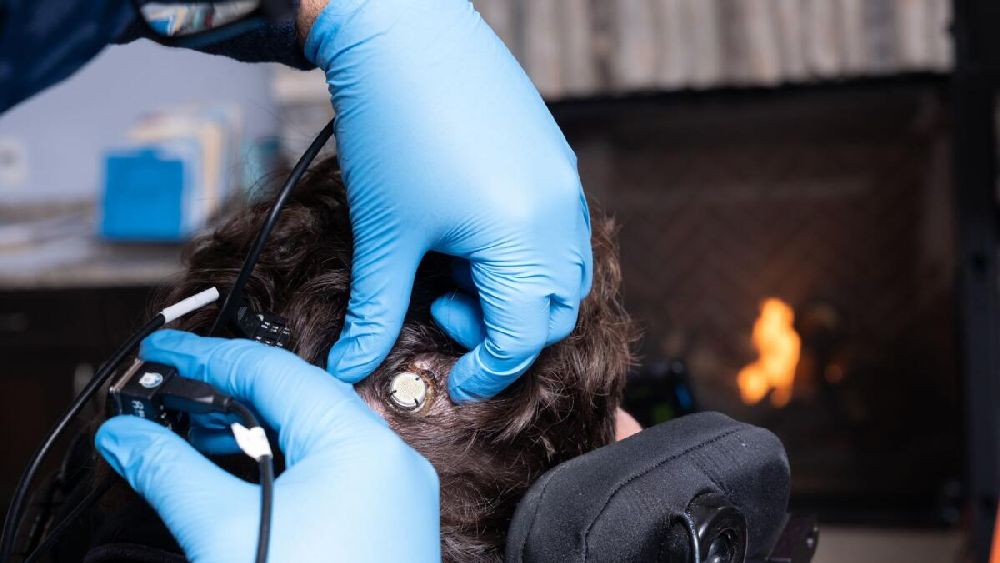 It’s a field that Elon Musk wants to advance, announcing in a recent presentation that brain implants from his company Neuralink would someday help restore sight to the blind or return people like Beggin to “full-body functionality.” Musk also said the Neuralink device could allow anyone to use phones and other machines with new levels of speed and efficiency.

Neuroscientists and Beggin alike see such giant advances as decades away, though. Scientists who have approval to test such devices in humans are inching toward restoring normal function in typing, speaking and limited movements. Researchers caution that the goal is much harder and more dangerous than it may seem. And they warn that Musk’s goals may never be possible — if they are even worth doing in the first place.

“It is fun to think about science fiction scenarios describing how the world might be,” said Paul Nuyujukian, a professor of bioengineering and neurosurgery at Stanford University who has spent years working on similar technology. “But given where we are right now with the science, it is not clear how those scenarios will be realised.”

The scientists at the Neuralink event Nov. 30 and those watching online agreed that the engineering that Musk showed off was an elegant mashup of some of the best ideas in the decades-old field. Replacing the soda-can-like protrusion from the head would indeed be a significant advance, they acknowledged.

Neuralink’s device prototype would eliminate that problem, but only after patients undergo robotic surgery to cut a hole in the head slightly larger than a quarter. Then the robot knits 1,024 cobweb-thin electrode tendrils into the gray matter of the brain and rests the pucklike device in the hole.

With work so delicate, some researchers in the field worry that one high-profile misstep could erase years of progress.

“The communications coming out of Neuralink too often sounds like cowboy activity, right?” said Marcus Gerhardt, chief executive of Blackrock Microsystems, a brain-computer interface company that could be a Musk rival.

Gerhardt said the neurosurgeons affiliated with his company “are petrified every day that something terrible could happen there and affect the rest of the space.”

Beggin is one of about three dozen people who have a device called a “Utah array” implanted in the brain for research purposes. The device includes a small grid of electrodes dipped barely 2 millimetres into his brain. That is linked to a portal mounted on his head and, via cables, to another computer.

Most of the days Beggin spends working with the Cleveland research team involve looking at a moving arm or hand on a computer screen and envisioning himself making the same motion. That allows researchers to detect the neuron-firing patterns in his brain that give rise to each movement. Those signals are communicated to a system that manipulates eight nerves in his arm to make it move, said A. Bolu Ajiboye, a professor of biomedical engineering at Case Western Reserve University whose team has been working with patients like Beggin.

The work can be tedious, Beggin said, but he finds it worthwhile for the days when he can move his hand. His experience builds on work with a prior volunteer, who was also paralyzed in the arms and legs, and managed to lift a forkful of mashed potatoes to his mouth with the system.

Beggin did not watch the Neuralink presentation last week. But he said he was dismayed to hear that Musk raised the notion of “full-body functionality” for people who are paralysed.

It’s an outcome Beggin hopes to see in a generation.

His mother, Shelly Beggin, agrees. “As a parent, I would love to hear that,” Beggin said. “I would have held on to that hope that he would be able to walk.”

Realistically, she said, she’s happy to see her son’s hard-won hand motions. Scientists who work on the brain-computer interfaces say that tempering patient expectations is important in a field that has seen stunning progress but faces daunting challenges.

Academic teams across the nation are working on projects aimed at restoring function to those with disabilities or degenerative diseases. Scientists are working to map the visual center of the brain so points of light can be projected in the mind’s eye to help the blind see shapes and letters. Other teams are working on translating neural electricity into speech, cursor control, handwriting and typing applications.

Several companies, including Neuralink, are working on fully implantable devices. Paradromics, a startup in Austin, Texas, is developing a device that sits inside the skull. Synchron, based in New York City, is taking a different approach, making an incision in the chest and pushing a tube-shaped device into an artery close to the brain. This avoids the dangers of brain surgery, but the signal it captures from the brain is considerably weaker.

Despite all the promise in the field, scientists say this technology has very little to offer to the typical consumer, as it is merely approaching the speed and precision of able-bodied control.

That seems as if it’s about to change, Ajiboye said. He compared the field to the computer industry in 1980 when it was on track for a revolution.

“I firmly believe that we’re at the same initial ramp curve in terms of understanding brain mechanisms,” he said.

During the Neuralink presentation, a video showed a monkey named Pager reportedly using a prototype implant in its brain to move a cursor across a computer screen. Musk’s team also showed off the inner workings of the device, impressing some of the neuroscientists who watched the event.

During the event, Musk announced that Neuralink was seeking permission from the Food and Drug Administration to test the device in humans, and he guessed that a clinical trial would begin next year.

This would be a notable step forward. Others have tested wireless devices in humans, but Neuralink has built a chip smaller, faster and potentially more powerful than anything that has come before.

“They basically sourced a lot of the best ideas out there in the top of the field and paid to bring them together into a new system,” said Cristin Welle, a University of Colorado neuroscientist and former FDA brain-implant lab director and device consultant. “And I think that is exciting. Now whether they can really surmount all of these technical hurdles to demonstrate that it is in fact safe, it remains to be seen.”

It is the FDA that will decide when the trial begins if it grants approval to Neuralink. The agency will pay close attention to device durability, given the risks and feasibility of repeated brain surgeries, Welle said. That means device makers will have to surmount the challenge of operating electronics for years in the soggy milieu of the brain. They will also need to prove that their supercomputing device does not generate heat or current that unduly injures delicate brain tissue, she said.

There are also very real limits to what the device can do. There may be ethical limits too.

As Neuralink pursues a human trial, it is fighting complaints over its tests with monkeys. The company filed papers in a California court this month seeking to block the release of photos of primates it tested from 2017 through 2020. The Physicians Committee for Responsible Medicine, an advocacy group, previously obtained hundreds of pages of veterinary records and filed a complaint with the Agriculture Department, claiming primate test subjects developed infections and were treated carelessly.

The Agriculture Department said it could not comment on the group’s complaint, citing the pending litigation. Neuralink has denied the claims, but they could affect the progress of its technology.

If and when Neuralink begins a human trial, it would be limited to people who have real needs for the technology, most likely those with spinal cord injuries or other forms of paralysis.

Although Musk has said the Neuralink device could be implanted in healthy humans to enhance their abilities, that seems a remote possibility at this stage. He has compared future uses of the implant to those of another medical device marketed for reasons that are not purely disease-curing: LASIK surgery lasers, which are used to improve vision.

“There is an ethics question that needs to be answered, and they have yet to address it,” Ajiboye said, referring to Musk and Neuralink.

To Austin Beggin, implanting such a device in a completely healthy person is a step too far. He would prefer that Musk and his company focus on people like him who could use this device to restore functions that have been taken away, like shaking someone’s hand or waving to a curious child who approaches his wheelchair.

“Using the technology to allow an able-bodied person to start a car?” he said. “It is a hard thing for me to rationalize.”