Why did the chicken cross the Atlantic..?

Because this particular chicken, has got something that works far better than wings.

There was a lot of hype prior to today’s launch of LA famous Dave’s Hot Chicken, not least because its a street food brand famously endorsed by certified chicken lover Drake. And after having experienced it in a cheeky little preview earlier this week, we can confirm the hype checks out. This chicken is fire. 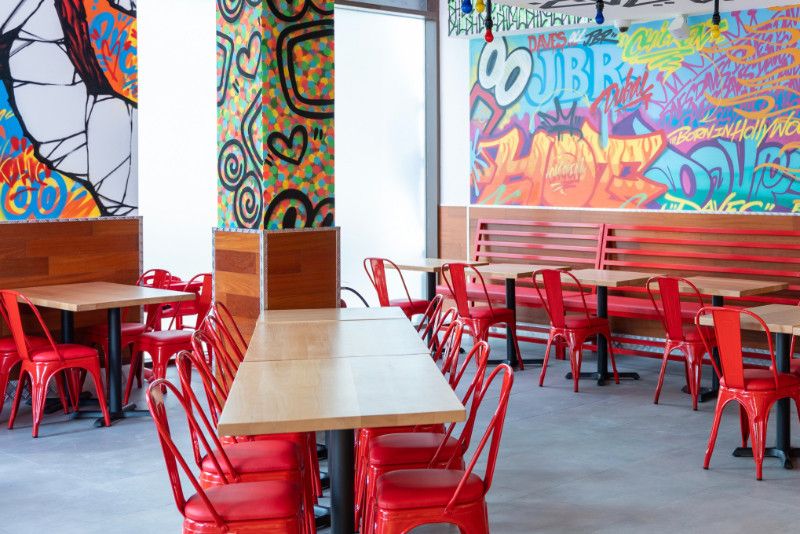 The brand hatched back in 2017, emerging from an East Hollywood parking lot. It was conceived by founders Arman Oganesyan, Tommy and Gary Rubenyan, and Chef Dave Kopushyan — built on a spicy passion for hot chicken.

As if scripted by one of the studios down the road, fame beckoned and the quartet’s grind and hustle, along with some incredibly tasty Nashville tenders — soon translated into culinary clout.

Fast forward to 2022, and not only is Dave’s Hot, juicy, handed-breaded Chicken a household name in the states, buoyed by cash investments from Samuel L. Jackson and Drake, but the brand is now spreading its wings and opening overseas.

Outlets like this brand-sqawking new Dubai one, located on The Walk, JBR — at the Rixos Premium end of the strip. It’s decorated in the operation’s signature stripes, wild old-skool street murals hand sprayed by grade A graffiti artists. Dave’s Hot Chicken was brought to the UAE in partnership with Lavoya Restaurant Group, the minds behind Dubai appearances of Barbar and Joe and the Juice.

But how does it taste? It’s dangerous territory to start suggesting that Dave and his army of poultry have taken the throne, and this is now objectively and ostensibly the best hot chicken in Dubai. That’s the sort of westcoast beef that can start chicken turf wars. But you know what? It might just be.

Available in tender (served on sliced, juice-catching bread, with house pickles) or slider (which comes with slaw, in a potato bun) format, with combo deals priced from around Dhs52.

There are seven spice levels ranging from the, frankly ‘pepper is actually spicy though’ crowd-pleaser  – ‘no spice’, to the infernal nose-watering, “I can see through time” mouthfuls of ‘the Reaper’. The marinade for the latter is based on the deliberately-ominous sounding Carolina Reaper chili, and if you want to try it yourself, you need to sign a waiver, seriously. We tried all of them, from not to hot, and they are without exception hydrant-level-juicy, perfectly seasoned and bursting with big ol’Americana flavour waves.

And if you’re watching the video, those weren’t tears in the part where we try the Reaper tenders, those are excitement eye sweats.

Hot, very hot in fact, on the heels of the JBR branch — will be a Motor City location, due to open in the next few weeks.

After that, Lavoya have confirmed we can expect a total of 31 locations in the GCC including Saudi Arabia, Qatar, Kuwait, Bahrain and Oman, with Qatar stores anticipated to open as early as next month.

The Walk, Jumeirah Beach Residence, 11am to 1am Sunday – Thursday, 11am to 2am Friday – Saturday. @daveshotchickengcc