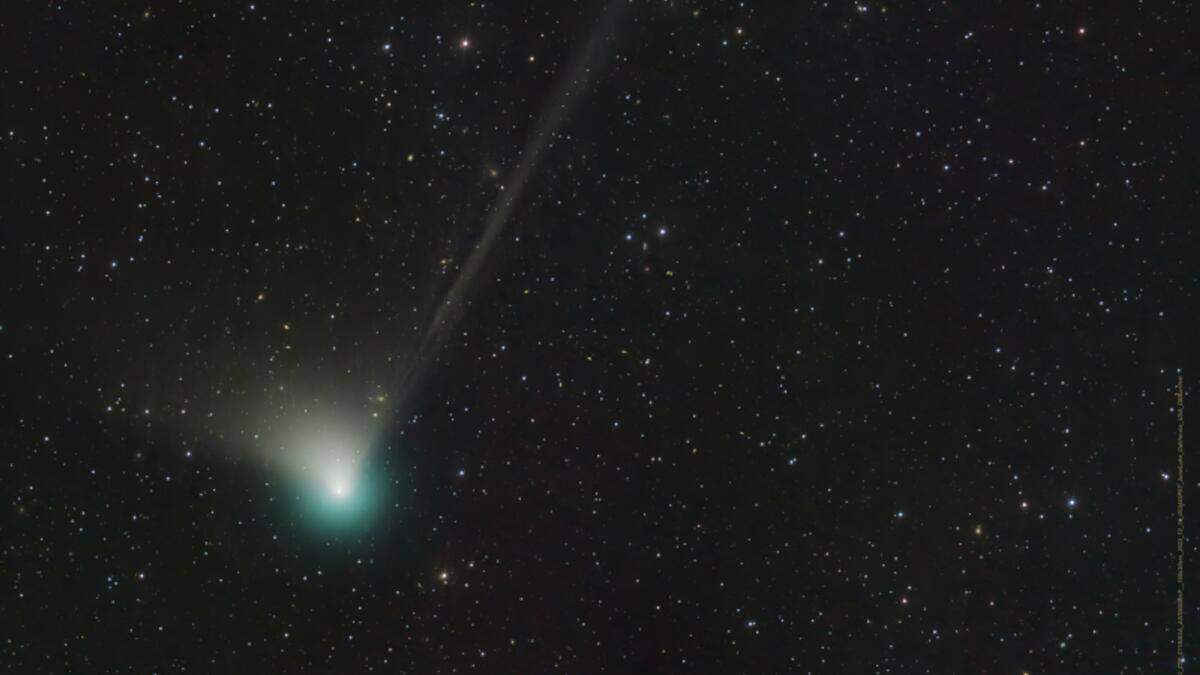 A newly discovered comet could be visible to the naked eye as it shoots past Earth and the Sun in the coming weeks for the first time in 50,000 years, astronomers have said.

The comet is called C/2022 E3 (ZTF) after the Zwicky Transient Facility, which first spotted it passing Jupiter in March last year.

After travelling from the icy reaches of our Solar System it will come closest to the Sun on January 12 and pass nearest to Earth on February 1.

It will be easy to spot with a good pair of binoculars and likely even with the naked eye, provided the sky is not too illuminated by city lights or the Moon.

The comet “will be brightest when it is closest to the Earth”, Thomas Prince, a physics professor at the California Institute of Technology who works at the Zwicky Transient Facility, told AFP.

Made of ice and dust and emitting a greenish aura, the comet is estimated to have a diameter of around a kilometre, said Nicolas Biver, an astrophysicist at the Paris Observatory.

That makes it significantly smaller than Neowise, the last comet visible with an unaided eye, which passed Earth in March 2020, and Hale-Bopp, which swept by in 1997 with a potentially life-ending diameter of around 60 kilometres.

But the newest visit will come closer to Earth, which “may make up for the fact that it is not very big”, Biver said.

While the comet will be brightest as it passes Earth in early February, a fuller moon could make spotting it difficult.

For the Northern Hemisphere, Biver suggested the last week of January, when the comet passes between the Ursa Minor and Ursa Major constellations.

The new moon during the weekend of January 21-22 offers a good chance for stargazers, he said.

“We could also get a nice surprise and the object could be twice as bright as expected,” Biver added.

Prince said another opportunity to locate the comet in the sky will come on February 10, when it passes close to Mars.

The comet has spent most of its life “at least 2,500 times more distant than the Earth is from the Sun”, Prince said.

Biver said the comet was believed to have come from the Oort Cloud, a theorised vast sphere surrounding the Solar System that is home to mysterious icy objects.

The last time the comet passed Earth was during the Upper Paleolithic period, when Neanderthals still roamed Earth.

Prince said the comet’s next visit to the inner Solar System was expected in another 50,000 years.

But Biver said there was a possibility that after this visit the comet will be “permanently ejected from the Solar System”.

Among those closely watching will be the James Webb Space Telescope. However, it will not take images, instead studying the comet’s composition, Biver said.

The closer the comet is to Earth, the easier it is for telescopes to measure its composition “as the Sun boils off its outer layers”, Prince said.

This “rare visitor” will give “us information about the inhabitants of our Solar system well beyond the most distant planets”, he added.