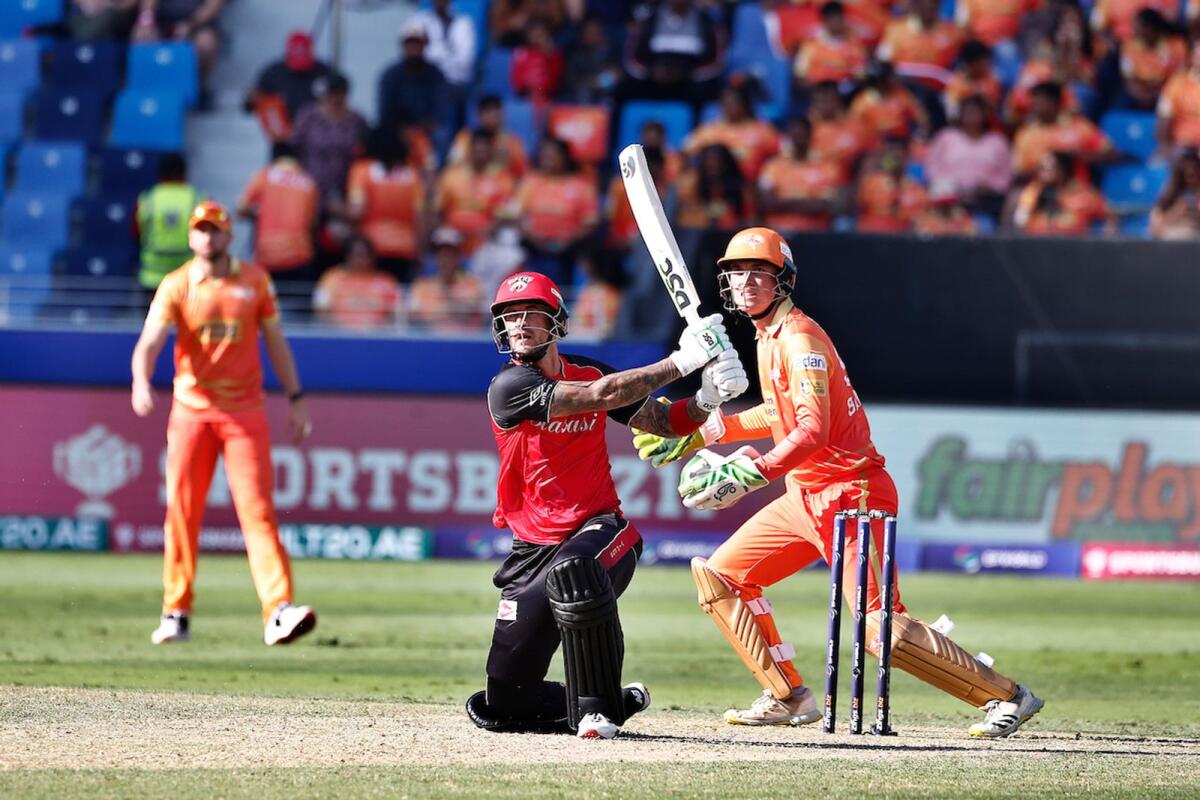 The superstars at the DP World International League T20, being held across Dubai, Abu Dhabi and Sharjah, continued to keep the fans on the edge of their seats in the second weekend of the tournament.

While Desert Vipers’ Alex Hales struck the ball all over the park against Abu Dhabi Knight Riders, Sheldon Cottrell mesmerised one and all with his splendid bowling performance against the same opposition.

Meanwhile, the Gulf Giants cemented their place at the top of the table further by continuing their unbeaten run in the tournament. Even though the Desert Vipers put up a huge total of 195 for four in their 20 overs at the Dubai International Stadium on Sunday, Chris Lynn and Shimron Hetmyer strung a partnership of 117 runs to help the Giants chase down their target with three balls to spare.

The MI Emirates have gained a reputation for taking the game deep while chasing big totals. They produced two thrilling chases during the second weekend of the DP World ILT20. The Emirates seemed down and out when they needed 20 runs off the last over against Abu Dhabi Knight Riders at the Zayed Cricket Stadium in Abu Dhabi on Saturday, but Dwayne Bravo and Najibullah Zadran struck three sixes and a four off Andre Russell’s bowling to take their team to a thrilling five-wicket victory.

Chasing a mammoth total of 222 for three in the same stadium on the very next day, Kieron Pollard played an extraordinary innings of 86 runs off 38 balls, but Rovman Powell dismissed him in the 16th over to ensure that the Dubai Capitals clinch a 16-run victory in the end.

Alex Hales became the first player to score a century in the DP World ILT20 when he raced his way to 110 runs off 59 balls against Abu Dhabi Knight Riders. He smashed seven fours and six sixes during his innings to help the Desert Vipers register a comprehensive 111-run victory.

Sharjah Warriors’ Tom Kohler-Cadmore didn’t want to be left behind as he also achieved a three-figure score on the very next day against the Dubai Capitals. The opening batter smacked 10 fours and six sixes on his way to an unbeaten 106 runs off 47 balls. His magnificent innings helped the Warriors achieve their target of 178 in just 14.4 overs.

Following Hales’ destructive innings, Desert Vipers’ speedster Sheldon Cottrell rocked the Abu Dhabi Knight Riders’ top-order. He bowled out Brandon King in the first over of their innings and then picked up the wickets of Kennar Lewis and Dhananjaya de Silva to leave the Knight Riders reeling at 42 for five in seven overs.

Fast bowler Benny Howell backed his teammate up with impressive figures of two for six in the game. Howell dismissed Akeal Hosein and Matiullah Khan as the Knight Riders folded for just 108 runs, while chasing a target of 220 in Abu Dhabi on Friday.

The DP World ILT20 made its debut at the Dubai International Stadium on January 13. Some of the greatest cricketing superstars have made their way to the UAE to play in the inaugural edition of the league.

The tournament is being played in a 34-match format across the UAE’s world-class cricket facilities in Dubai, Abu Dhabi and Sharjah.

An enticing ‘Friends and Family’ package is now available starting at an incredible Dh 20 for fans to enjoy the action from the stands, as well as have the chance to be chosen to sit in the luxurious ‘Fan Pod’ on offer at each stadium.

More information about these packages and to purchase tickets can be found by visiting https://tickets.ilt20.ae.

Tickets can be purchased by visiting https://tickets.ilt20.ae.