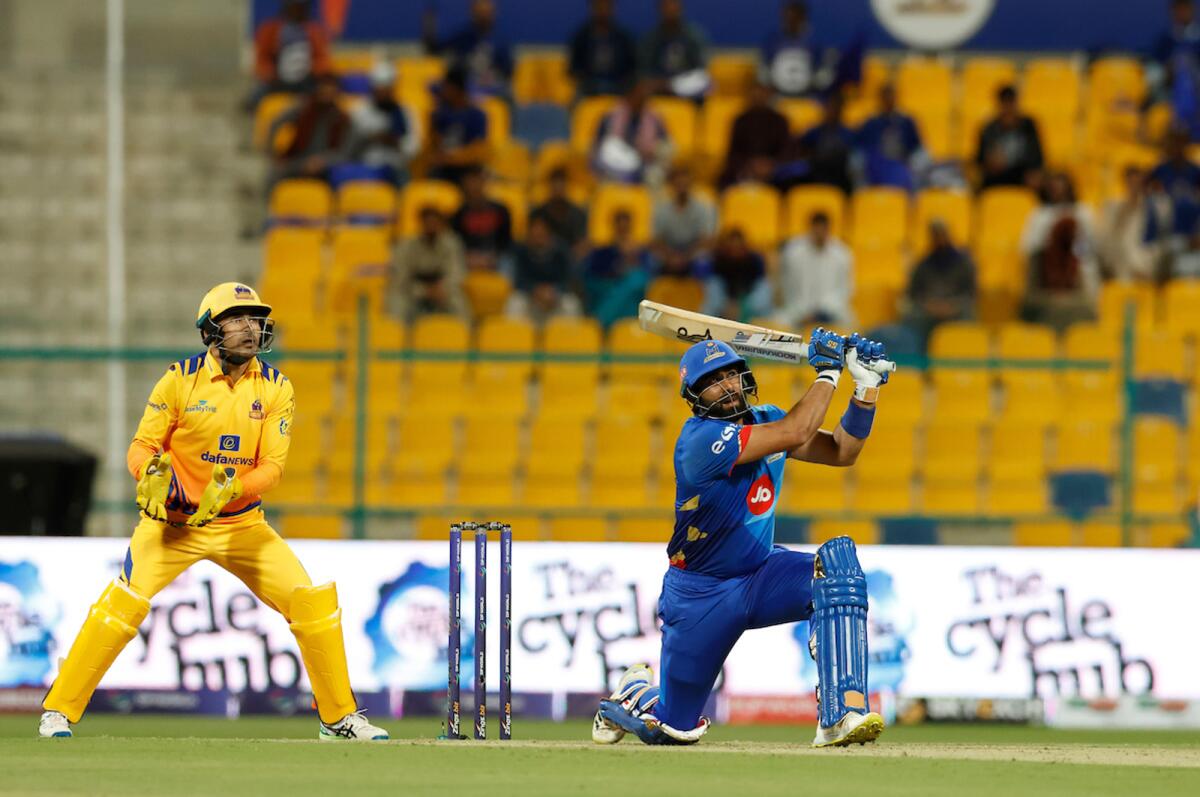 UAE’s Muhammad Waseem, displaying his wide repertoire of aggressive strokes, produced a spectacular knock of 71 runs and steered MI Emirates to a 49 runs win over Sharjah Warriors in the second match of the DP World ILT20 at the Zayed Cricket Stadium on Saturday night. He was backed by Nicholas Pooran’s 49 to help MI Emirates post a whopping total of 204 for 5 in 20 overs.

Waseem, who has been a consistent performer in franchise league matches and for the UAE team, made the home fans proud through his knock that came off 39 balls with five boundaries and four sixes. Pooran’s 49 was scored off 30 balls with four sixes and two boundaries.

Sharjah Warriors wilted under the pressure of MI Emirates’ mammoth score. They had won the toss and elected to bowl. Waseem, opening with England’s Will Smeed, hit back to back boundaries off Naveen Ul Haq, who bowled the second over. Waseem also hit Chris Woakes’ first delivery of the third over past square leg for another boundary. Off the third ball of that over, Woakes forced Smeed to top edge to wicketkeeper Rahmanullah Gurbaz for 2.

Andre Fletcher joined Waseem and hit UAE’s Junaid Siddiqui’s fifth delivery of the fourth over for a six to mid-wicket. The first five overs produced 39 runs. Fletcher accelerated the run flow in the sixth over hitting Siddiqui for three successive boundaries. This took the score past the 50 run mark too. Waseem also hit UAE’s Karthik Meiyappan for a six over long-on. Woakes picked his second wicket forcing Fletcher to edge to wicketkeeper Gurbaz for 22. The pair had put on 47 runs for the second wicket.

Another hard-hitter Pooran joined Waseem and unleashed his six-hitting skills. He hit the first ball of the 11th over from Mohammad Nabi for a six while Waseem hit the third delivery for another six. More sixes followed with Pooran hitting Joe Denly over long on. Waseem too reached his half century in style hitting Moeen Ali for a six to mid-wicket. Eighteen runs each were scored off Ali’s over.

Pooran’s third six over point off Siddiqui was a treat to watch. Waseem’ stupendous knock came to an end in the 15th over when he hit Nabi to Evin Lewis at deep midwicket for 71. At the end of the 15th over MI Emirates were 151 for 3 with skipper Kieron Pollard joining Pooran.

In the last five overs, MI Emirates scored 53 runs with Pooran on 49 pulling Siddiqui into the hands of Denly at deep mid-wicket. Siddiqui also picked the wicket of Najibullah Zadran. Pollard (22) and Dwayne Bravo (21) put on an unbeaten 41 runs partnership. Bravo hit the last delivery of the innings from Nabi for a six over long-on to take the score past the 200 runs mark.

Chasing a run rate of 10.20, Sharjah opener Evin Lewis got out for a duck playing Fazalhaq Farooqi on to his wicket. One-drop Dawid Malan too fell trapped leg before to the first ball from Farooqi forcing skipper Moeen Ali to face the fifth ball of the second over and avoid a hat trick.

Then opener Gurbaz and Ali began the damage repair. Gurbaz did majority of the scoring hitting Trent Boult for two successive boundaries and a six in the sixth over. Ali, after adding 49 runs for the third wicket, fell to Bravo hitting into the hands of Fletcher at long-on. Gurbaz too followed bowled by Bravo for 43 off 31 balls with seven boundaries.

At the half way mark, Sharjah were 69 for 4 needing another 136 from the last ten overs, The required run rate too rose to 13.60. Imran Tahir clean bowled Tom Kohler-Cadmore for 10, had Joe Denly caught by Pollard at long on for 9, and had Nabi caught behind by Pooran for 3 to ensure MI Emirates a comfortable win. Chris Woakes hit a fighting 62 off 29 balls with nine boundaries and two sixes to delay MI Emirates’ victory.