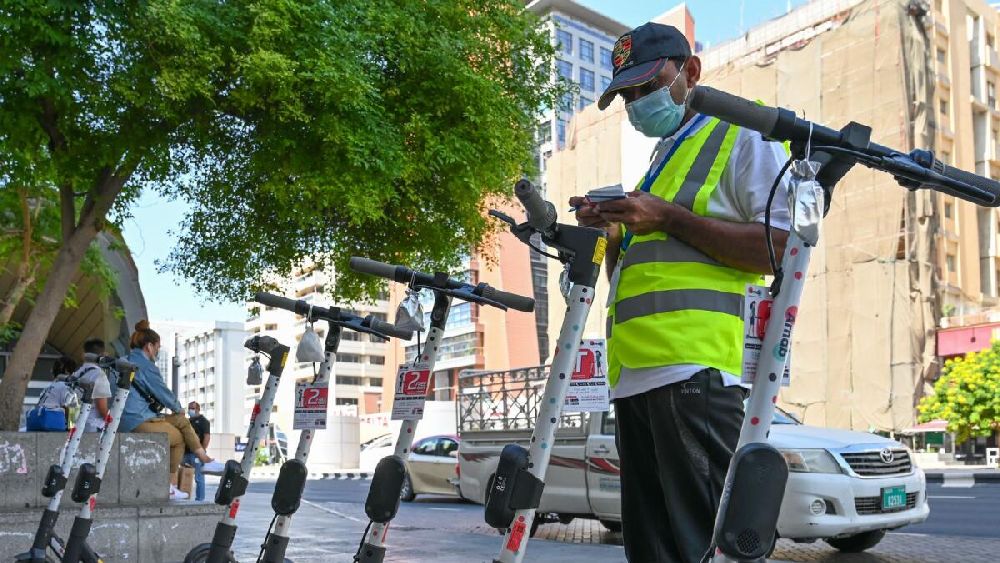 These came as Dubai Crown Prince and Chairman of The Executive Council Sheikh Hamdan bin Mohammed bin Rashid Al Maktoum issued a resolution regulating the use of bicycles and e-scooters in Dubai.

No further details were announced about the driving licence permits for e-scooter riders.

According to the resolution, cyclists below 12 years should be accompanied by an adult who is 18 or older. Riders below 16 years are not permitted to ride an e-scooter.

Cyclists and bikers should always ride on the right side of the road. Before changing their lane, they should give hand signals and ensure they can make their move safely.

Making major modifications to the bike is not permitted.

Cyclists should not use their bicycles on roads with a speed limit of more than 60kmph. E-bikes and cycles are not allowed on jogging or walking tracks.

“Riders should refrain from cycling carelessly and abide by public safety requirements. Reckless practices that can endanger others’ lives — like hooking to a vehicle while biking — are strictly not permitted.

“One-handed cycling and biking should be strictly avoided except when riders need to use their hands for signalling. Reflective vests and helmets are a must for cyclists and bikers,” the resolution says.

Bikes should be fitted with a white head lamp in front and a red one and red reflector in the rear. They should have a bell fitted on the steering wheel and brakes on the front and rear tyres. The tyres should be proportional to the size of the bike and fit for use on the roads and cycling tracks designated by the RTA.

The size of the bike used should also be proportional to the size of its rider, according to the resolution.

They are not permitted on bicycles and electric bikes unless the vehicles have separate seats for them.

Pillion riders or anything that causes an imbalance on an e-scooter is prohibited.

Bikers should ensure they maintain a safe distance from other vehicles and pedestrians. They should also ensure that the bikes are parked in designated spaces (if any). Parking in non-designated areas and causing obstructions to vehicles, pedestrians and users of public space is strictly prohibited.

What to do in case of accidents

In crashes that result in injuries or material damages, riders should report the incident to police, RTA or ambulance services depending on the nature of the incident.

Entities conducting group cycling training (for more than four cyclists) should ensure they have received RTA approval. They should also ensure that they have notified Dubai Police, Dubai Sports Council, UAE Cycling Federation, and Dubai Corporation for Ambulance Services about the vehicles used to accompany cyclists to ensure their safety.

Riders of these vehicles should be trained in accordance with RTA’s approved training programmes developed in coordination with the UAE Cycling Federation.

Failure to adhere to laws and regulations governing cycling and biking or endangering the safety of other cyclists, vehicles and pedestrians can result in penalties and fines. These can include confiscation of the bike for 30 days in case of repeat violations within a year of the first violation and bans on riding the bike for specific periods.

In case the violation is committed by someone under the age of 18, his or her parent or legal guardian will be responsible for paying any fine.

Failure to pay the fine will lead to confiscation of the bike.

The resolution gives the police the power to control acts in violation of the law. RTA employees, who are granted judicial powers can do this as well.

Violators can dispute fines or penalties within 30 days of the date of notification through a written grievance. The grievance will be reviewed by a committee, and a decision issued within 30 days. This decision is final.

Aim of the resolution

The resolution supports Dubai’s efforts to transform itself into a bicycle-friendly city and promote environmentally friendly modes of transport. It also contributes to reducing road traffic congestion by encouraging the use of alternative means of transport, and promoting the public health of the community.

Mattar Al Tayer, Director-General and Chairman of the Board of Executive Directors of the RTA, said: “RTA has a comprehensive development plan for creating a large network of cycling tracks that links all key areas of Dubai. The tracks, designed according to international best practices, seek to encourage people to use bicycles, electric-bikes and e-scooters as an eco-friendly form of transportation.”