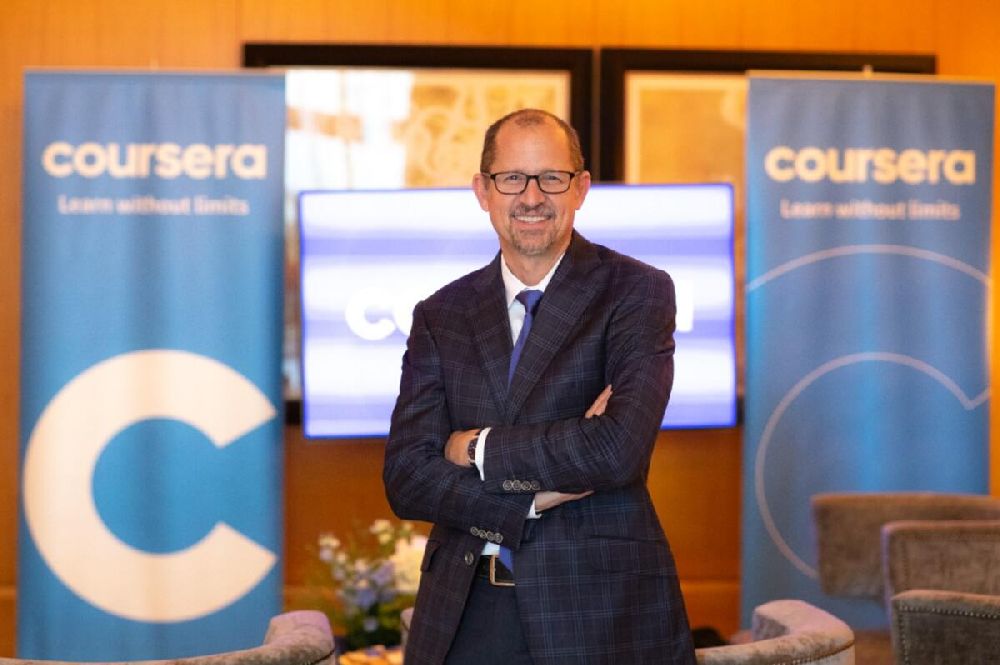 Jeff Maggioncalda, who joined Coursera as Chief Executive Officer (CEO) in June 2017, told Khaleej Times during his recent trip to Dubai about how Coursera — the leading American edtech company — “broadened the ambit of his courses from advanced data and analytics, cloud computing to psychology and social sciences”.

The pioneering edtech firm started bringing in industry partners, not just universities, on board for job-related training exercises.

“Individuals who may not have a relevant degree or a digital profile but can develop a skill set to remain relevant in the job market,” an affable Maggioncalda said.

“We’ve been creating industry micro-credentials for where all the young populations are, such as the Middle East, Latin America and Southeast Asia. Governments across the world are realising that they need to change their educational policies to facilitate these online micro-credentials being built into the education systems to make them accessible to all. This is a valiant attempt to tap into the demographic bulge and take advantage of an exuberant young population,” he said.

However, the biggest product differentiator for Coursera in a highly competitive edtech sector is its content, which comes from top institutions, universities and industry partners from around the world.

For instance, Maggioncalda recently signed agreements with top 10 Indian universities for content as South Asia’s most populous country looks to roll out New Education Policy (NEP) from next year. “This kind of a tie-up is a win-win situation for both universities and us because we’re offering premium quality courses for learners across the world,” he added.

He is bullish about growth in the Middle East and North Africa (MENA) region.

“We’re working with the Abu Dhabi School of Government to make sure that their public sector employees go through retooling and upskilling and their human capital gets developed. We’ve been working from Saudi Arabia National eLearning Center to Emirates NBD to G42 to FGB, which are some of the biggest institutions in the region.” he added.

Coursera’s growth through the years can be categorised as the first phase, where educators were brought to individuals between 2012 and 2014 and followed by educators to institutions from 2014 onwards. Of late, it’s been connecting learners to jobs, which is skill mapping for a vast section of the young population in the developing world.

Coursera is looking at 4,095,795 registered learners in the MENA region by end-December, a record 61 per cent year-on-year growth

“The Arabian Gulf coast countries have an incredible opportunity to take the resources that are available because it was happening in the energy markets and to invest that in the human capital,” Maggioncalda said while citing Coursera’s tie-up with top 200 universities in the world across all disciplines.

The association can prove to be a windfall gain for the oil-rich region that’s investing heavily in simultaneously creating world-class physical infrastructure and human capital.