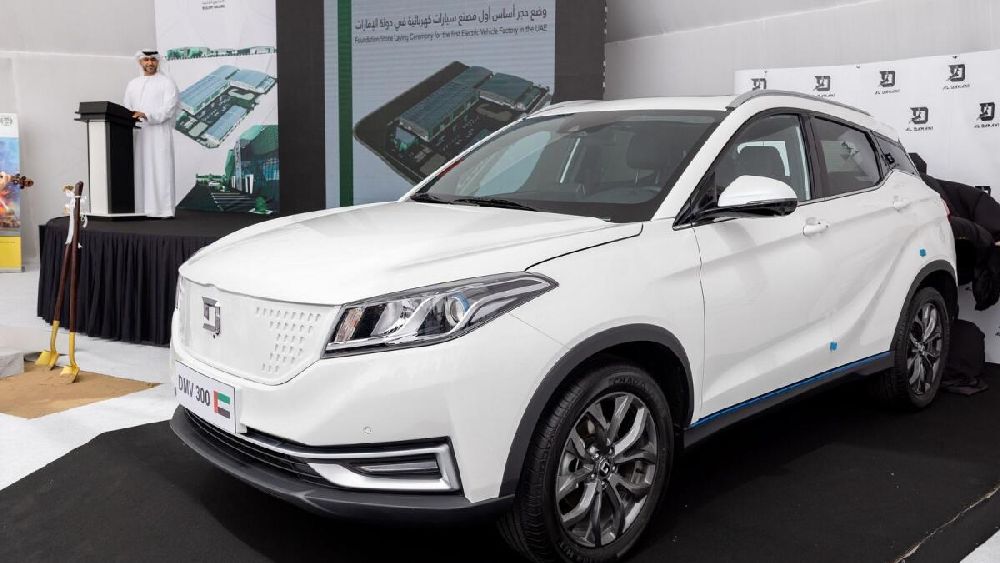 Dubai on Monday welcomed the UAE’s first ever electric vehicle manufacturing facility that is expected to produce 55,000 cars per year to meet the rising demand for green mobility and reducing global carbon emissions in the region

M Glory Group laid the foundation stone for facility, which is worth an investment of Dh1.5 billion, at Dubai Industrial City. The factory’s official opening was presided over by Omar Suwaina Al Suwaidi, undersecretary at the Ministry of Industry and Advanced Technology; Dr. Magda Al-Azazi, chairman of the board of directors of M Glory Holding Group; and Saud Abu Al-Shawareb, MD of Dubai Industrial City.

The sustainable industrial facilityis set to create more than 1,000 jobs, and is built on a total land area of one million square feet to accommodate future expansion plans. The electric cars produced at the site will be exported to the wider GCC region, in addition to Egypt, Tanzania, Senegal, Mali, and Kenya.

Omar Al-Suwaidi, undersecretary of the Ministry of Industry and Advanced Technology, said that the ministry, in coordination with partners from the UAE’s industrial sector, is implementing a package of projects and initiatives under the UAE’s national industrial strategy. The aim of these projects is to make vital sectors in the UAE, including the industrial and technological sectors, more attractive to investors. They will also help industries of the future to develop new competitive advantages and consolidate the position of the UAE as a hub for global companies, investments, and talents.

“The ministry is focused on encouraging local manufacturers to diversify and develop their production to support the growth of national industries and enhance their competitiveness,” he said. “The establishment of a factory to produce electric vehicles in the country is in line with the ministry’s efforts to create new competitive advantages for advanced industries. It is also in line with the goals of the ’Make in the Emirates‘ campaign, launched by the ministry, which focuses on enhancing the future and sustainability of industries.”

M Glory also unveiled their first fully electric car called ‘Al Damani’ DMV300 at the event. With two different models built using European specifications, the car has a battery capacity of 52.7 kWh and can cover more than 405km on a single charge. The company aims to benefit from the Fourth Industrial Revolution and sustainability by employing future technologies and robotics in the manufacture of electric vehicles (EVs). The new facility is an extension to their portfolio, which includes robotics engineering and artificial intelligence, as well as sustainable real estate.

“Today, we are laying the foundation stone to inaugurate an Emirati industrial facility with international specifications where we will manufacture environmentally-friendly electric cars, contributing to global efforts to reduce carbon emissions and support sustainable development,” said Dr. Magda Al-Azazi, chairman of the board of directors of M Glory Holding Group.

She also revealed that the M Glory factory will operate through two production cycles per year, and employ technologies that include a welding line, a dyeing line, and a final assembly line. She also added that the factory will produce a variety of electric cars, the types and details of which will be revealed soon. These cars will be competitive and durable as they are compatible with the environment and atmosphere of the Gulf region and will constitute a qualitative addition to the electric car sector, she assured.

“The announcement of the new facility comes in conjunction with Expo 2020 Dubai and carries forward the momentum achieved by this international event, which has strengthened the country’s position regionally and globally,” she said. “It has helped define the emirate’s ability to attract business and investments, thanks to its world-class infrastructure, security and stability, as well as legislation and laws that keep pace with the country’s advancement. This has enabled the UAE to become a global economic center, topping international economic indicators in terms of competitiveness and business environment.”

The UAE has accelerated its sustainability efforts under the UAE Road to Net Zero Strategy, with several local entities announcing goals to shift the mentality towards environmentally friendly transportation. These include the Roads and Transport Authority (RTA) which has set a target to make public transport emission-free by 2050. According to the International Energy Agency, the shift to public and private electric transport is quickly gaining momentum, with consumer spending on EVs reaching $120 billion.

Saud Abu Al-Shawareb, MD of Dubai Industrial City, said that sustainability is “a global responsibility” and transitioning to alternative, low emission energy sources is an integral part of achieving a greener future.

“The manufacturing industry can play an essential role in enabling the national net zero strategy by delivering innovative, technology-backed solutions in line with Operation 300bn and powered by our partnership with the Ministry of Industry and Advanced Technology. M Glory’s addition to our community demonstrates our commitment to boosting the manufacturing industry, as well as supportive environment that empowers local manufacturers like M Glory to set up operations and fuel the ‘Make it in the Emirates’ initiative,” he said.

Auto
. Reviving nameplates of old SUVs is a growing trend in the automotive industry.

Auto
. The horse is and has been such an integral part of man’s progress