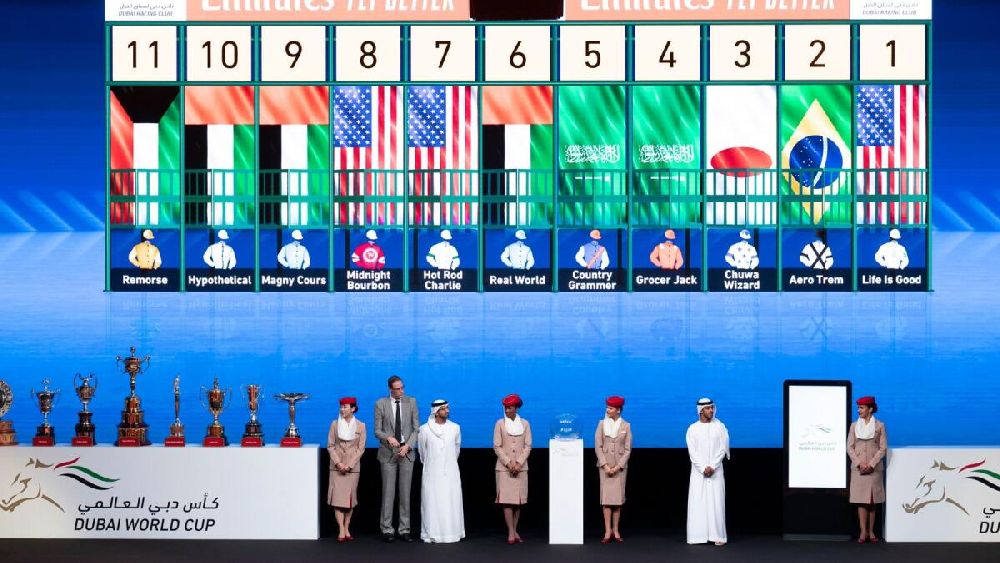 You can’t usually get much out of Saeed bin Suroor. He is a man of few words, who prefers to play his cards close to his chest, while his body language does not reveal much.

But on Tuesday evening at the Post Position Draw for Saturday’s 26th edition of the Dubai World Cup (G1), the nine-time race winner was a revelation as he opened up uncharacteristically after his stable hope, Real World, drew the favourable Gate 6.

Unlike in the past, Bin Suroor did not need much encouragement to spill his heart out and said: “I’m very happy with that, we’ve got the best draw.

“This (race) was always the plan for him. We’ve always trained him on the all-weather track at home. He’s always shown his form well on that and he’s trained really well.”

“I’m very happy with him. He worked last Saturday and it was really the best work I’ve ever seen, he clocked 1 minute 26 seconds on the bridle,” added Bin Suroor, splashing a smile rarely seen.

“The horse is doing good. His draw is brilliant and Christophe (Soumillon) the jockey knows the track very well. He’s a two-time winner of the race (with Thunder Snow in 2018 and 2019) so it’s great to have him on our side. It’s a very tough race and it’s hard to win,” added Suroor who won his first Dubai World Cup in 1999 with Almutawakeal.

“You always have to have a good horse. We’ve won it nine times and we’ll go for number ten on Saturday.”

While there were hard-luck stories for two other UAE contenders, Hypothetical who drew Gate 10 and Remorse who will break from the furthest of posts in 11, favourite Life Is Good drew the inside Gate,

Staged at the Dubai Opera, the draw ceremony was attended by Sheikh Rashid bin Dalmouk Al Maktoum, Chairman of Dubai Racing Club, owners, trainers, and guests from around the racing world.

Winner of the Pegasus World Cup Invitational Stakes and the Breeders’ Cup Dirt Mile (G1) in his last two starts, the front-running Life Is Good’s chances of winning were significantly increased with his Gate 1 position.

Elliott Walden, president and racing manager of co-owner of WinStar Farm said: “It’s an 11-horse field. He has enough speed to put himself in a good position.

“He has a beautiful way of moving, I think he knows he’s special. I feel just blessed to be around a horse like him and it’s a great honour to be favourite. We’re looking for good things on Saturday.”

Jimmy Barnes, the assistant trainer to three-time Dubai World Cup-winning handler Bob Baffert, was happy to land the fifth post and said: “It’s not often that you run in a $20million prep race for a $12 million race.

“He really showed up that night [in the Saudi Cup] and all signs are good for this. I believe that he is a mile-and-a-quarter horse. He’s such a gritty horse”

Emirati handler Salem bin Ghadayer has often revealed that winning the Dubai World Cup has been his biggest ambition. But he faces a big challenge on Saturday as Hypothetical, fourth in the race last year, drew Gate 10.

Bin Ghadayer made a poor attempt at diffusing the situation when he said: “It’s a good draw, not an excellent draw. We would have preferred to have been inside but what can you do, this is the race. We have options from there and I am so happy with the horse.”

Success in the Dubai World Cup will cap an outstanding year for champion trainer elect Bhupat Seemar, who took the luck of the draw on the chin and said: “Funnily enough, eleven is my lucky number. I don’t think it’s too bad. We can follow Hypothetical. We’re just happy to be here in the Dubai World Cup.”

It is often said, that you’ve got to be in a race to win it, and that particularly holds for Saturday’s renewal of a contest that has been won by favourites and outsiders alike.