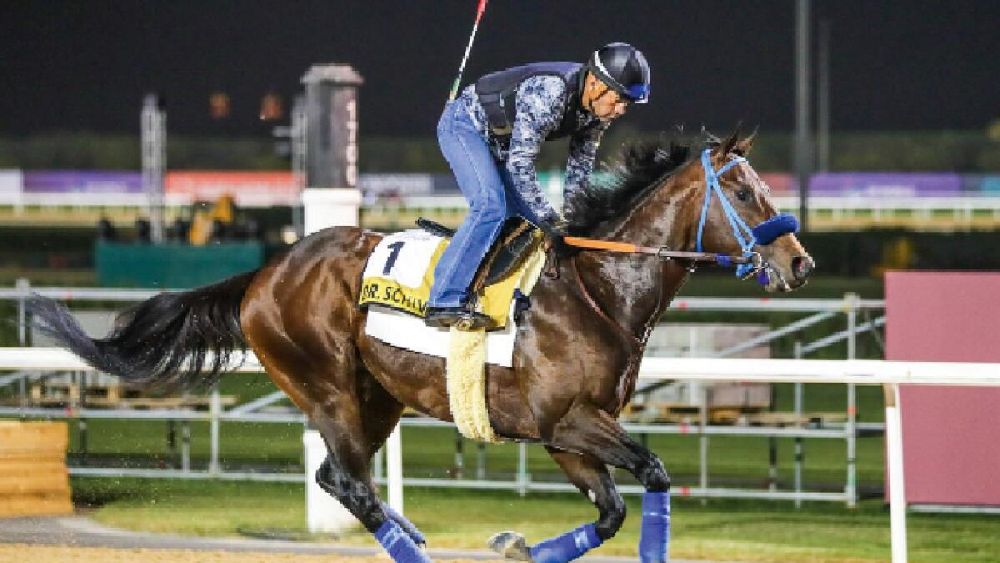 This year’s renewal of the Dubai Golden Shaheen probably is the most open in the history of the Dubai World Cup with many a top contender vying for the prize in this six-furlong skirmish on the Meydan dirt. It is one of two races, the other being the G1 Dubai Kahayla Classic for Purebred Arabians, where Godolphin don’t have a presence.

The North Americans have a strong contingent of horses with Dr.Schivel, with the highest official rating of 119, one of the top favourites for the $2 (Dh7.35) million contest.

Dr. Schivel, the four-year-old son of Violence, scored victories in the G1 Bing Crosby Stakes and the G2 Santa Anita Sprint Championship Stakes last year. Dr. Schivel finished a close second to Aloha West, by a margin of a nose, in the G1 Qatar Racing Breeders’ Cup Sprint. After placings in all his previous eight starts, Dr. Schivel placed outside for the first time in his career when he finished seventh in the G1 Malibu Stakes. Trainer Mark Glatt was on hand at the early morning trackwork at Meydan Racecourse on Thursday and reported that all systems are a go.

“He’s a real laidback horse, he takes everything in his stride,” said Glatt. “He’s all class. You never know how a horse might ship, especially this far. He seems to have made it very well. He bounced right over the track in his gallop this morning, he had a nice workout,” the Californian added. Dr. Schivel, who is the ride of Flavien Prat, has drawn Gate 9 and Glatt revealed on how they probably will approach the race. “Depending upon what they are doing on the front end, our rider Flavien Prat will be able to choose what he wants to do. He will be able to see most of the field in the early stages. Our horse has gone wire-to-wire in the past and come from four or five lengths out of it. We trust Flavien. He’s ridden the horse magnificently every time and we expect he will make the right decisions,” explained Glatt.

One of the other American contenders is Drain The Clock, the four-year-old from Maclean’s Music. Drain The Clock has won five from eight starts which included the Grade 1 Woody Stephens Stakes, the Grade 3 Bay Shore Stakes and the Grade 3 Claiborne Farm Swale Stakes. His last race was the Gulfstream Park Sprint in February, where he finished second to Miles Ahead. Another one is Wonderwherecraigis.The dark horse in this race is of local interest and is Eastern World, saddled by Ahmad bin Harmash and the mount of Ray Dawson.

The five-year-old from Dubawi, Eastern World won the Group 3 Mahab Al Shimaal, a prep for this race. Manjeer, who is also in the field, had finished second in the race. UAE Trainer’s Championship leader Bhupat Seemar saddles Switzerland, the mount of nine-time UAE Champion Jockey Tadhg O’Shea. Japan, which has sent 24 horses — the largest contingent at this edition of the World Cup — has Red Le Zele, trained by Takayuki Yasuda.

Dubai-based American trainer Doug Watson saddles two — Al Tariq and Everfast — but has the unenvious record of sending out a total of 18 runners without a win. Maybe Al Tariq or Everfast could finally end that title drought.