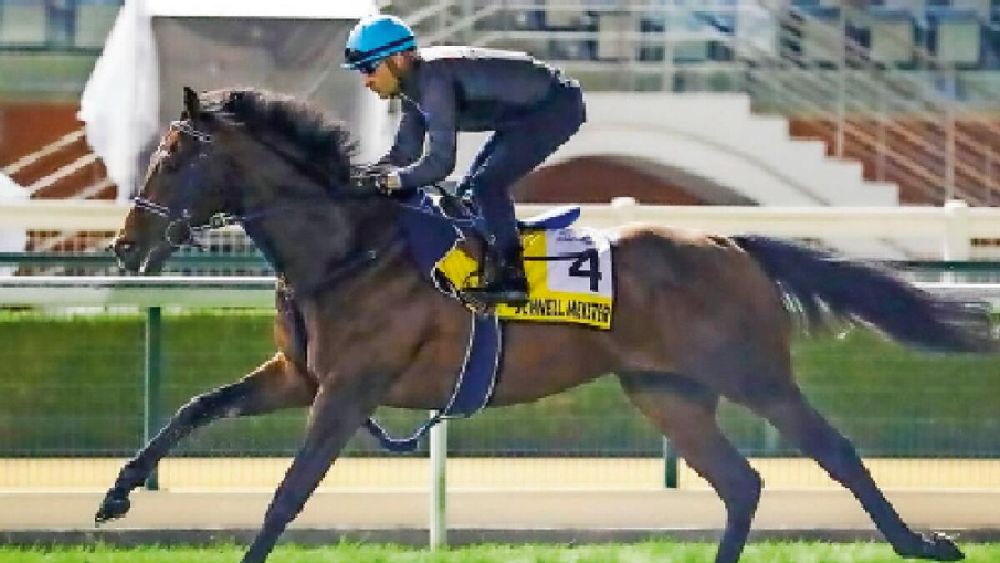 Despite breaking a blood vessel during the race, regally named Lord North won the G1 Dubai Turf in imposing fashion, crossing the finish line three lengths clear of his rivals.

Now, 12 months on, he has returned to defend his crown at Meydan where he must once again overcome a Japanese galloper in the form of the 7/2 favourite, Schnell Meister.

Lord North’s victory in the Dubai Turf was one of the highlights of the 2021 Dubai World Cup meeting although it ended on a sad note when upon his return to scale the gelding was sporting blood in one nostril. An endoscopic examination revealed a degree of bleeding.

He was subsequently given time to recover by his handlers, the father and son team of John and Thady Gosden, before appearing on the all-weather track at Lingfield in England in February to run a very good second in the G3 Winter Derby.

A six-year-old son of the superstar Darley stallion Dubawi, Lord North is reported to be in great shape heading to Dubai.

After his comeback race earlier this month, Gosden Sr reported: “Lord North was entitled to need his comeback run at Lingfield after such a long spell off and has come out of that in good shape.”

Lord North has amassed over £2.3 (Dh11.13) million in prize money in his career primarily through wins in top races like the Cambridgeshire Handicap at Newmarket, England, and the Prince of Wales’s Stakes at Royal Ascot.

Lord North will also bid to become the first horse to win the Dubai Turf in successive years.

Among his rivals are the Japanese-trained Schnell Meister, who must be respected given the dominance of the home nation at last month’s Saudi Cup meeting where they won four races.

Schnell Meister has won at both Group 1 and 2 level on turf at Tokyo last year before chasing home Gran Alegria in the prestigious Mile Championship at Hanshin in November.

One of the popular winners in Dubai is the nine-year-old Lord Glitters, who appears to thrive in the desert sun where he reserves his best form.

Having won the Group 3 Bahrain International Trophy on November 19, Lord Glitters returned to his trainer David O’Meara’s yard for a month and a half, before travelling to Dubai which has been home to him and assistant trainer Matt Ennis.

“He knows he’s going abroad as soon as he steps on the plane and settles straight into it,” Ennis told the . “I’m not as good with the heat as him but you’ve got to enjoy it when you’re travelling horses like this. The sun will always help older horses with their joints – it seems to improve them. They can relax a lot more and feel better in themselves,” said Ennis.

“He’s very grey at home but you come out here in the sun and he’s almost white. When his coat comes and he goes from a darker grey to white, you know he’s happy.

“We just keep things simple,” he said. “We look to keep him quiet and relaxed and make him find it easy. He’s an old man now but the sun brings another lease of life and he’s still got plenty of enthusiasm,” he added.

Will it bring victory as well? We will find out on Saturday evening.