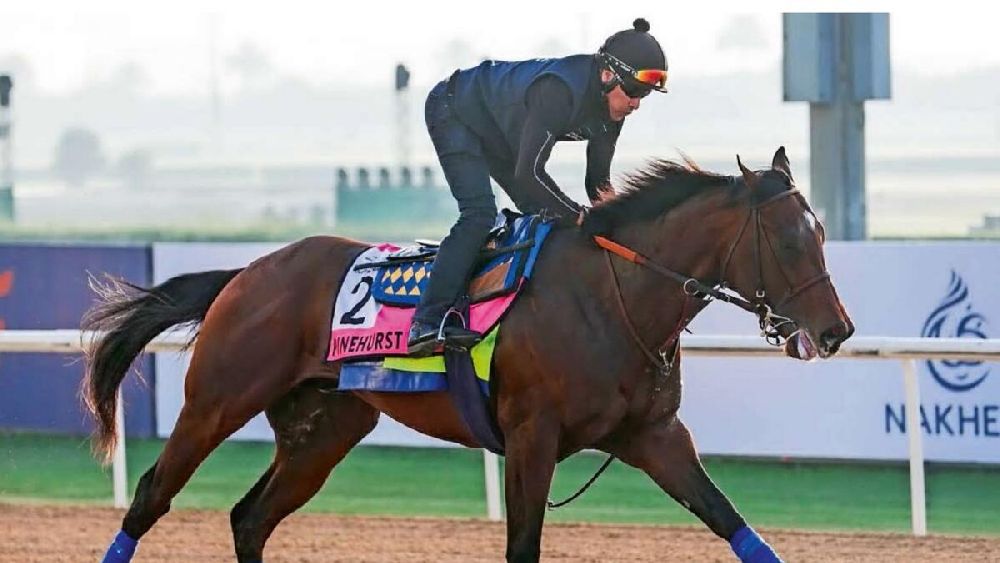 Saeed bin Suroor has saddled the maximum number of winners in the G2 UAE Derby, but he may not have things his own way on Saturday with a strong international field led by a trio of American-trainer colts led by recent Saudi scorer, Pinehurst.

The Godolphin handler bids to win a ninth colt’s Classic with a Island Falcon who will need to step up on the plate if he hopes to realise his trainer’s hopes even though bin Suroor remains optimistic of his chances.

“Island Falcon won well at Meydan on his first start of the year but was disappointing in the Saudi Derby,” he said. “This distance will suit him better and I have been pleased with his work going into this,” he added.

Standing in his way is fellow Godolphin contender Combustion, a Kentucky-bred son of Street Sense, who has travelled from Japan with a rock-solid record. The song of Discreet Cat has won or finished second on dirt in all five career starts for the stable’s trainer Keizo Ito.

A notable win was a cosy success on his most recent outing in the Listed Hyacinth Stakes at Tokyo.

Harry Sweeney, President of Godolphin in Japan, said: “Combustion had a successful juvenile career and established a new track record in the Hyacinth on his last start, so he’s a horse with talent in Japan.

“Most Japanese Group races are on turf though, so we may not have the confidence that we would have with a top-class turf runner. It’s sand in Japan, so it’s a little bit different from here and can be much deeper.

“His Highness Sheikh Mohammed bin Rashid Al Maktoum, Vice President and Prime Minister of the UAE and Ruler of Dubai, is excited to have a horse of his from Japan racing here, it fulfils his long-held global ambitions,” said Sweeney.

“For a horse of this calibre, the options on dirt are limited in Japan and so this was an obvious option,” he added.

The race also features three runners bred in the Southern Hemisphere including Irwin (Argentina), Kiefer (Brazil) and Quality Bone (Argentina), however they will have a weight penalty.

Pinehurst will be ridden again by the talented Flavien Prat, who partnered the son of Twirling Candy to a half-length victory in last month’s Saudi Derby (G3) in Riyadh.

Before travelling to the Middle East, Pinehurst launched his sophomore campaign in January at Santa Anita with a solid third-place finish behind leading Kentucky Derby contender Forbidden Kingdom in the San Vicente (G2).

The other US-based runners taking their chances are Gilded Age for inaugural Dubai World Cup-winning handler Bill Mott and Get Back Goldie for trainer Doug O’Neill.

Gilded Age, a son of Medaglia D’Oro who was third behind winner Early Voting in the February 5 G3 Withers at Aqueduct, will be ridden for the first time by Panamanian jockey Luis Saez.

Get Back Goldie has been in Dubai since the beginning of the year and has had two starts at Meydan. He will be ridden for the first time by three-time Eclipse Award winner Irad Ortiz Jr.

Two horses to watch out for are Russia’s Azure Coast, who won the UAE Guineas (G3) at Meydan in February; and Sekifu, a Japanese-bred son of Henny Hughes who was beaten by just a half-length by Pinehurst when second in the Saudi Derby.