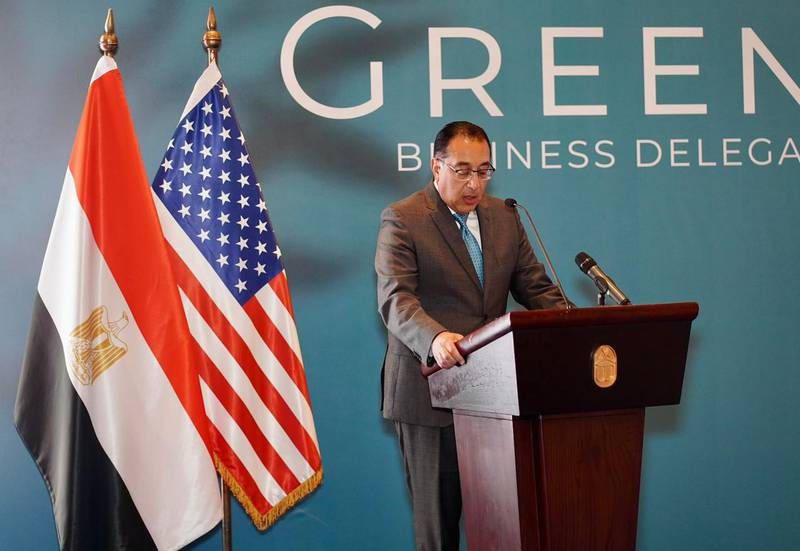 Egyptian Prime Minister Mostafa Madbouly at a US GreenTech business delegation event in Cairo on Monday. Photo: American Chamber of Commerce in Egypt

Egypt is seeking partnerships with the US private sector to boost green investments in the Arab world’s third largest economy as the country prepares to host Cop27 in November.

“Egypt assumes the coming presidency of Cop27 with a clear realisation of the importance of global efforts on climate change, including the indispensable role of the private sector and other stakeholders,” Mr Madbouly said during a GreenTech event in Cairo on Monday.

Egypt is working to encourage investment in green energy projects and accelerate the energy transition process in the region by investing in renewables and other forms of clean energy such as hydrogen. The country is aiming to increase renewable energy sources to 42 per cent by 2035.

The US is Egypt’s third-largest trade partner, with cumulative investments of $24 billion so far this year in the energy, petrochemicals and manufacturing sectors, Mr Madbouly said. 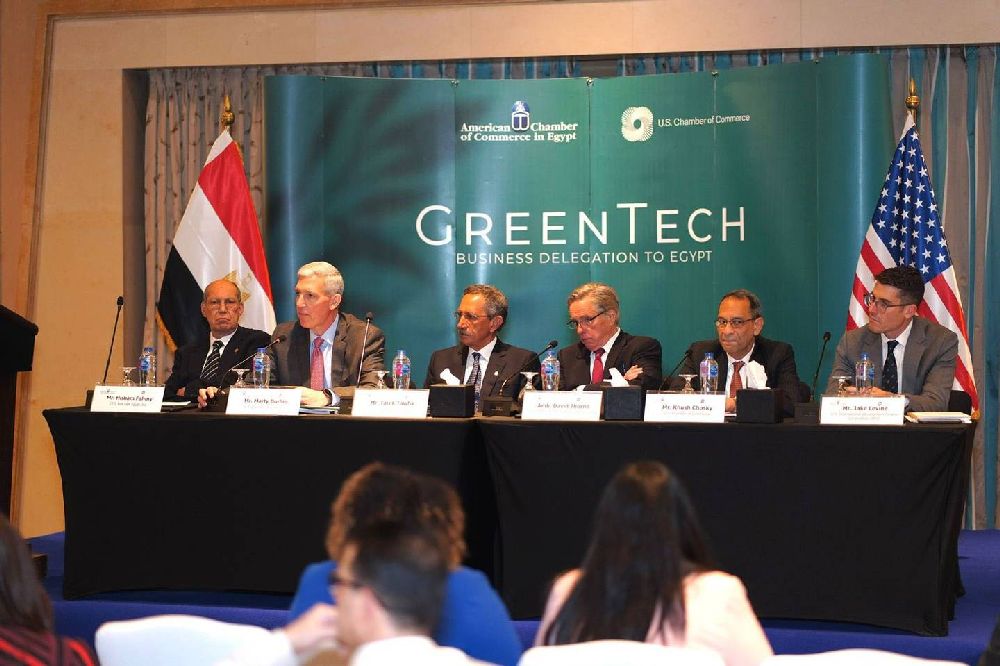 The delegation includes senior representatives from the US government and financing agencies, as well as about 40 American companies and financial institutions interested in discussing green investments and potential business partnerships in Egypt.

US companies signed two agreements for green projects with the Egyptian government on Sunday.

Renewable energy solutions company Energy3 signed an agreement with the Ministry of Environment to build a recycling facility in Fayoum that will turn waste into biodiesel and sustainable innovation firm Okeanos struck a deal to build a $50 million factory that will produce limestone alternatives to single-use plastics.

Ambassador David Thorne, senior adviser to the US Special Presidential Envoy for Climate John Kerry, said the mission reflects a “broad commitment across the Biden-Harris administration to engage the private sector in combating the climate crisis and to support Egypt on its green growth pathways”.

He commended Egypt for sending a “clear signal” that highlights the importance of the private sector’s contributions to the country’s green transition.

The Arab world’s most populous country has turned increasingly to the private sector as it struggles with the economic fallout of the Russia-Ukraine war.

Some of the challenges facing the Egyptian economy include a higher import bill, a rising budget deficit, surging inflation, a depreciating currency and declining tourism revenue.

Egypt has lowered its economic growth forecast from 5.5 per cent to 4.5 per cent for the fiscal year that begins on July 1, Mr Madbouly said on Monday.

The Egyptian government is prioritising investments in the energy, telecoms and tourism sectors, he said.

Mr Madbouly also emphasised the need to find stable renewable energy sources “as an emerging economy with a growing population”.

Egypt will be declaring its revised Nationally Determined Contributions (NDC) within weeks, Mr Shoukry said during a ministerial meeting on climate change in Copenhagen on Friday.

Mr Kerry said in March that he thinks rich countries will meet their pledge in 2023, though the original target had been set for 2020 at a 2009 UN climate summit.

“There is no single government on earth that can fill the climate finance gap”, which is why the private sector’s help is needed, Jack Levine, chief climate officer at the US International Development Finance Corporation, said during the event on Monday.