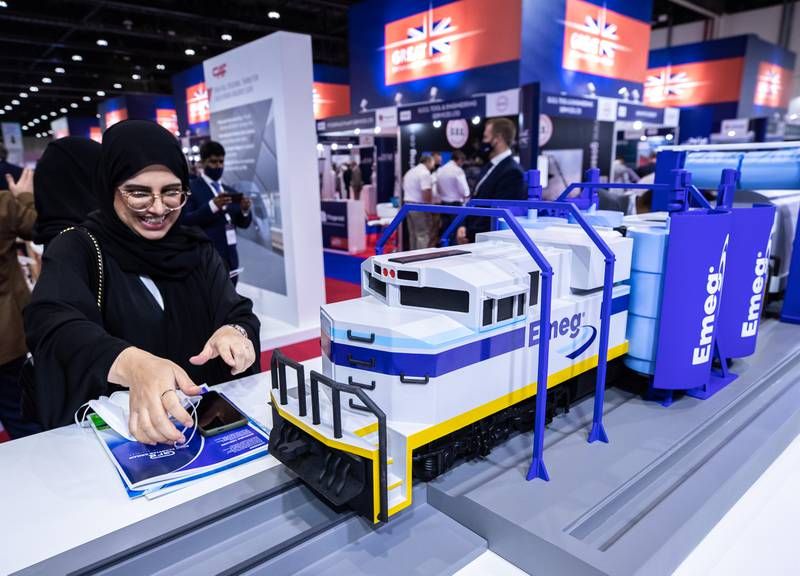 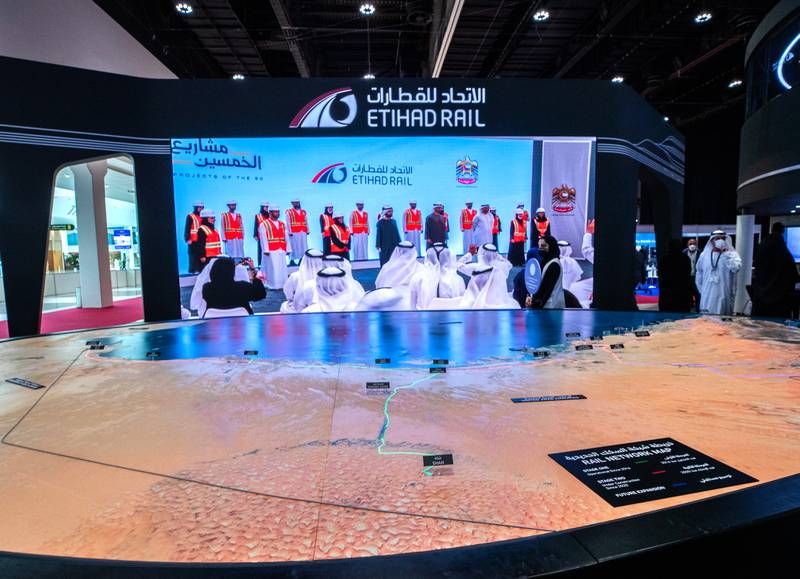 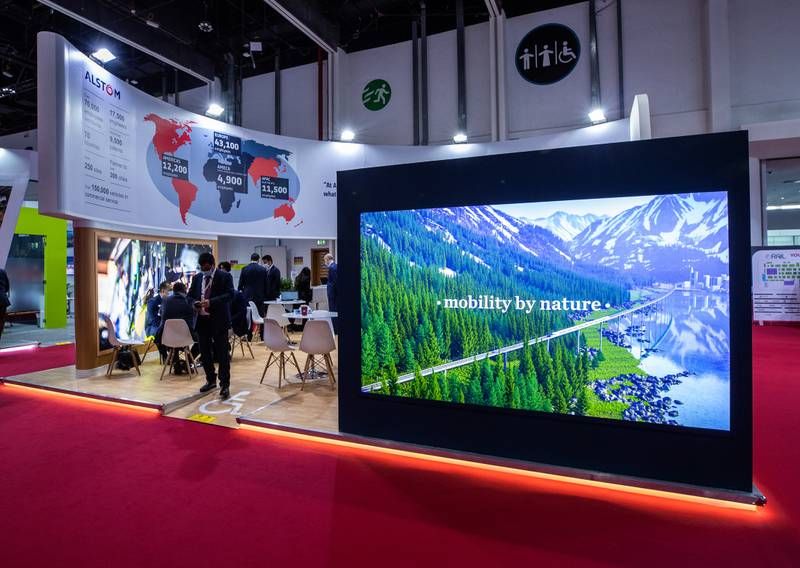 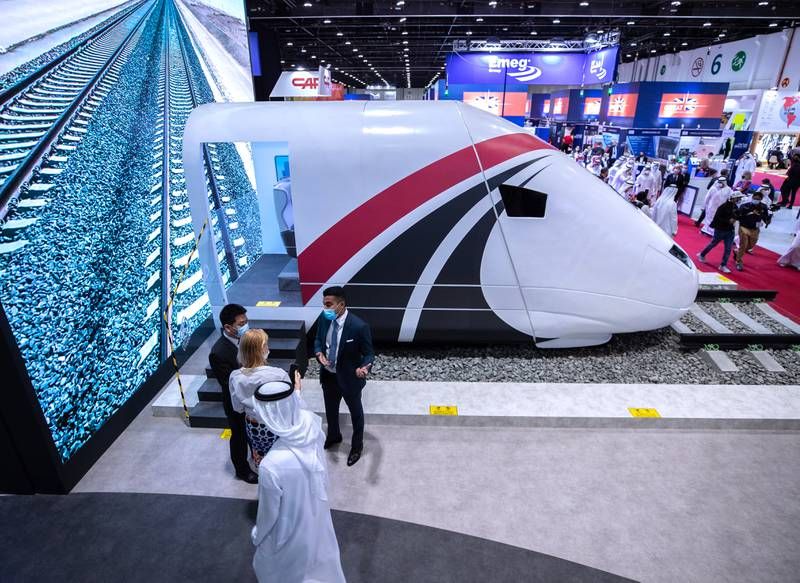 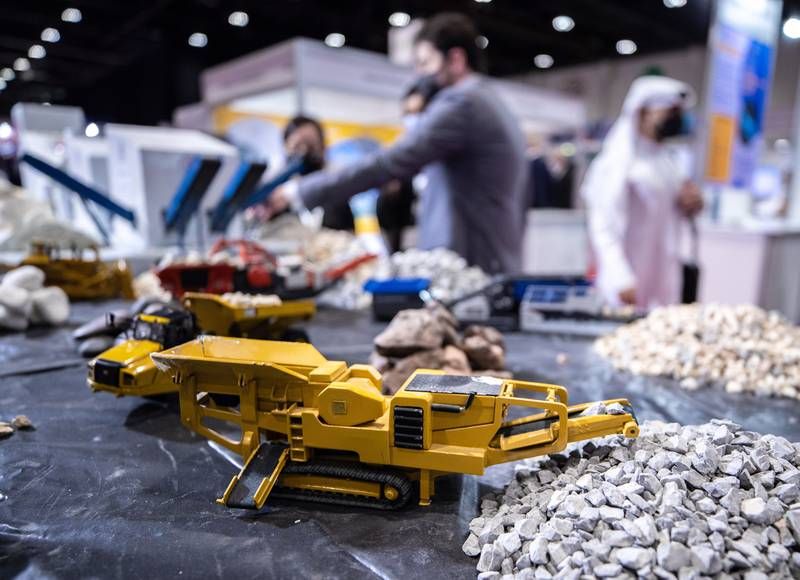 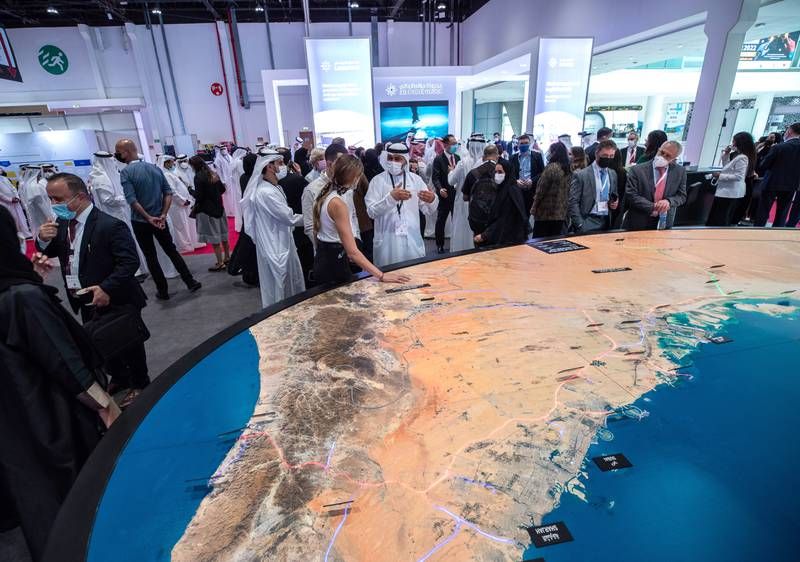 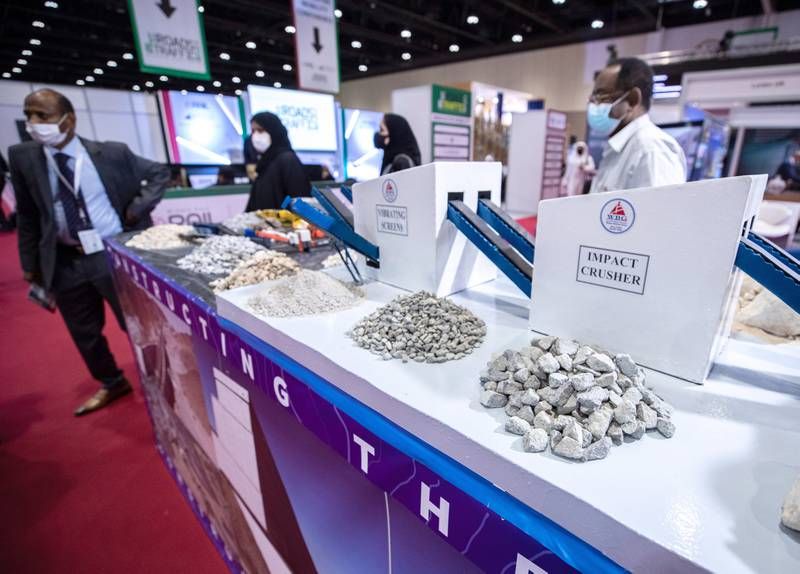 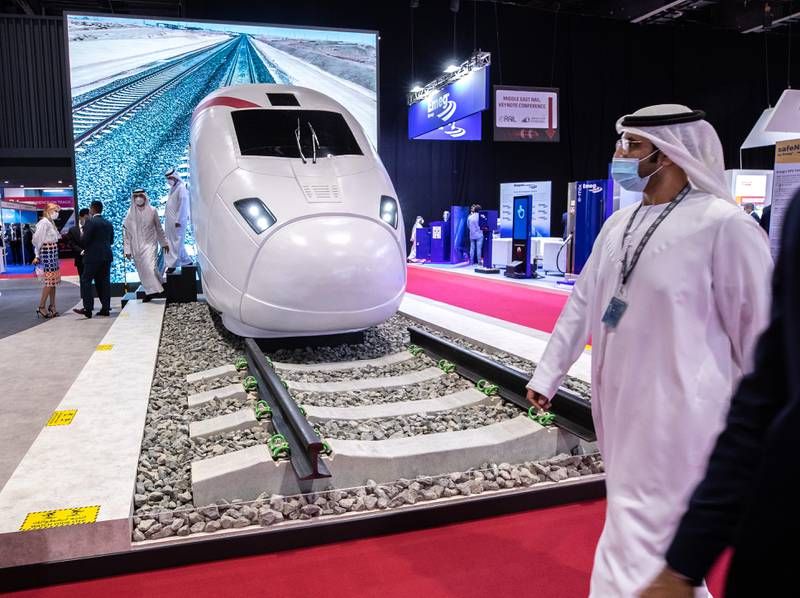 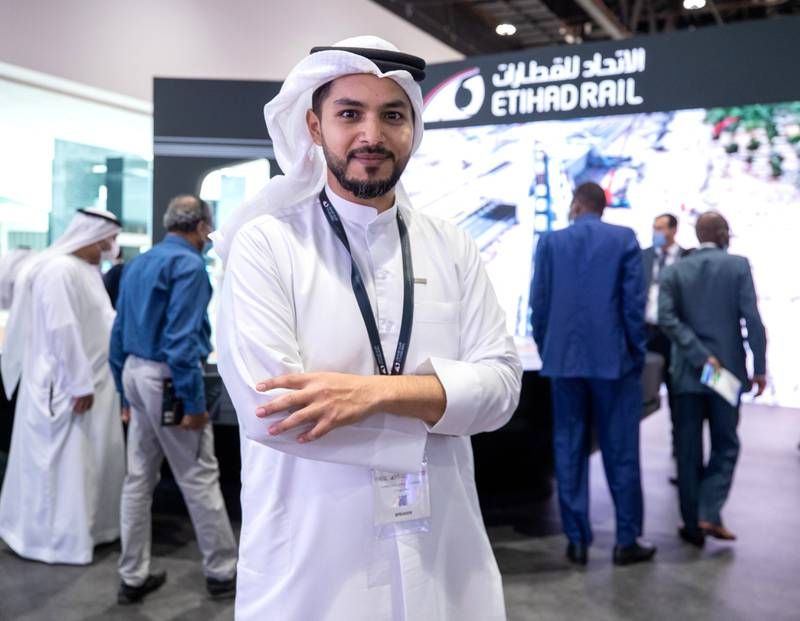 The Emeg depot solutions stall at the Middle East Rail conference 2022 in Abu Dhabi. All photos: Victor Besa / The National

The passenger train line being built in the UAE has the potential to change where people live, work and study, according to a senior figure from Etihad Rail.

The route was the subject of much attention on the opening day of the Middle East Rail conference on Tuesday, taking place at the Abu Dhabi National Exhibition Centre.

A launch date for the passenger line between Dubai and Abu Dhabi has yet to be announced, but industry experts believe it will transform the lives of people all over the UAE and across the region.

The passenger trains, capable of travelling at up to 200 kilometres an hour, will significantly reduce the travel time between the two cities and ease the amount of traffic on the roads, experts said.

“This project can play a big part in deciding where we work, live and study in the future,” Ahmed Al Hashemi, executive director of passenger services at Etihad Rail, told The National.

“There are many benefits. Not least it will mean fewer people travel by car, which is better for the environment, and it will also reduce the number of accidents as travelling by train is much safer.

“It is also faster and much more convenient.” 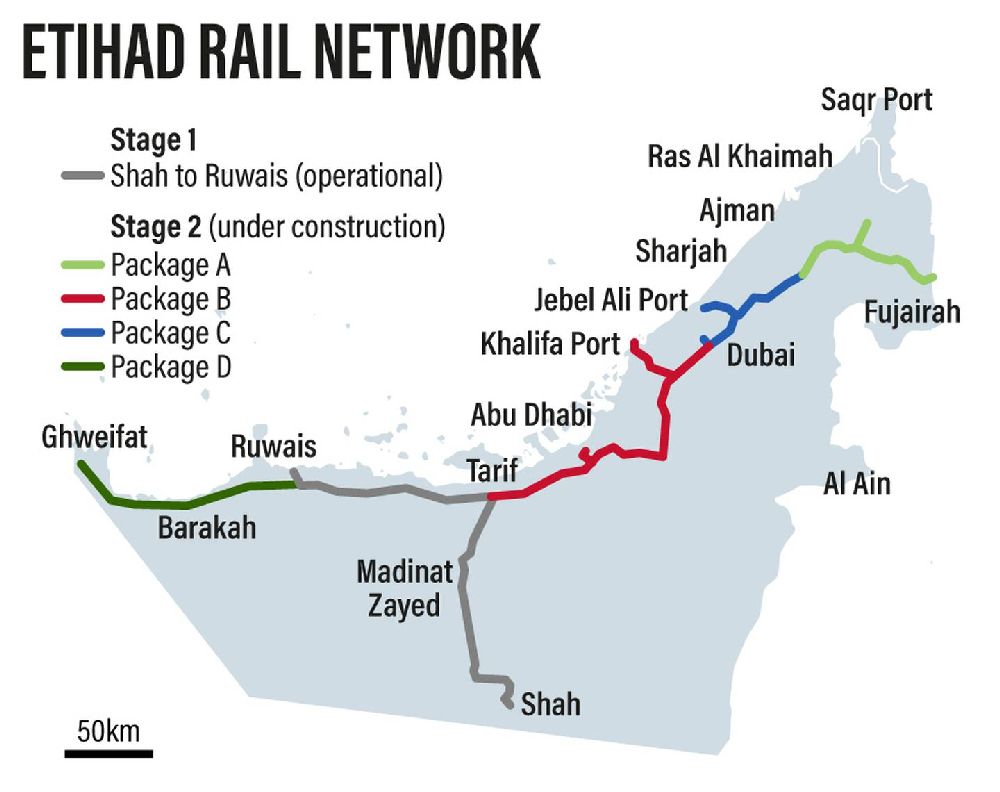 No update was provided as to when the passenger line between Dubai and Abu Dhabi would open.

However, it was announced in March that the tracks between the two emirates had been joined up.

The link between Dubai and Abu Dhabi stretches for more than 250km and includes 29 bridges, 60 crossings and 137 drainage channels.

The section linking Abu Dhabi and Dubai is part of Etihad Rail’s wider network which runs across 1,200 kilometres from the border of Saudi Arabia to Oman.

It is expected to carry more than 36 million people each year by 2030 between 11 cities in the seven emirates.

The travel time between Abu Dhabi and Dubai is expected to be about 50 minutes, with a journey from the UAE capital to Fujairah said to take twice that time.

Mr Al Hashemi said the railway system would be good news for everyone, including those who never plan to set foot on board a train.

“Even if you’re not planning on travelling any way other than by car, you will still enjoy the roads having less traffic on them,” he said.

“With a train, you feel much safer as well because it’s less impacted by things like weather conditions.” Construction is under way on the Etihad Rail bridge. This is part of the Etihad Rail development, a passenger and freight train project that will link all seven emirates in the UAE. All photos: Etihad Rail

Part of the Etihad Rail network is already operational, with freight trains running from gasfields at Shah and Habshan to Ruwais since 2016.

The service carries 22,000 tonnes of granulated sulphur each day.

Another expert believes the rail network will go a long way to enabling the UAE to meet its commitment to reducing its carbon footprint, as well as making the lives of residents and visitors hassle-free.

“If you’re arriving at the airport, you will soon be able to hop on a train rather than having to go and rent a car to get to where you want,” said Tamer Salama, managing director in the GCC of French rail-equipment maker Alstom.

“It is much more cost-effective for residents who commute as well, as they will be saving money they would otherwise spend on the likes of fuel and Salik gate fees.”

A regular passenger service between the emirates, and eventually to countries across the region, would also be an attractive proposition for people trying to travel to and from business meetings, said another senior expert.

“People will be able to work remotely on a train, whereas that time would have been lost if they were having to drive themselves,” said Leon Soulier, chief executive of Siemens Mobility in the Middle East and Africa.

However, he said that if the service was going to be a success, there were still some challenges ahead beyond simply putting a train down on a track.

“In other countries, commuters don’t mind walking to a train station because the weather isn’t so hot,” he said.

“That’s not the case here. We have to make sure there’s the infrastructure in place for people to get from their front door to the train station as easily as possible.

“There needs to be a proper feeder network in place, with the likes of buses making regular trips to the stations.”

Abu Dhabi to Dubai railway: what is it like to ride on Etihad Rail? 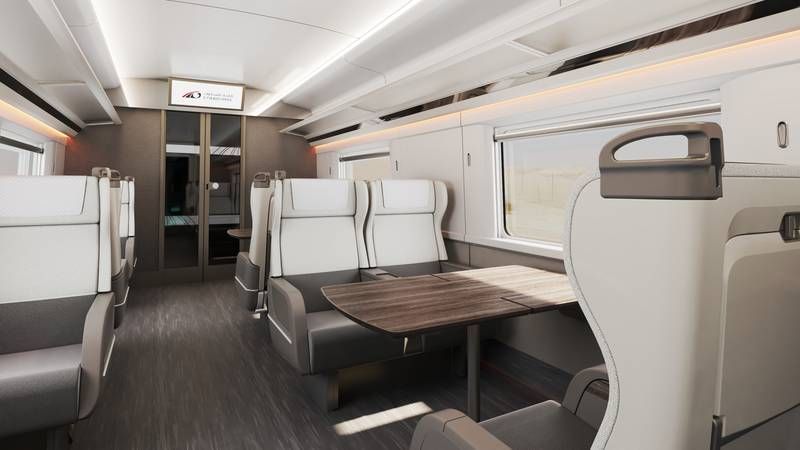 A rendering of a train to be used on the UAE’s new passenger rail service. All Photos: Etihad Rail