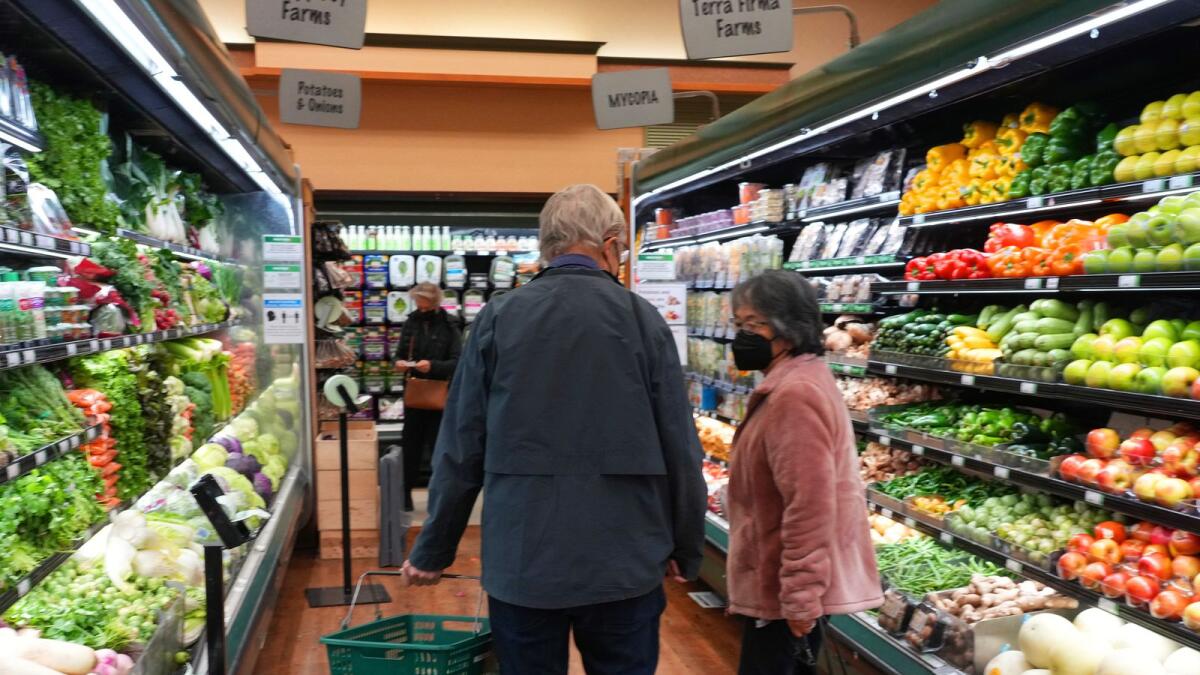 One of the defining economic stories of the past year was the complex debate over whether the US economy was going into a recession or merely descending, with some altitude sickness, from a peak in growth after pandemic lows.

This year, those questions and contentions are likely to continue. The Federal Reserve has been steeply increasing borrowing costs for consumers and businesses in a bid to curb spending and slow down inflation, with the effects still making their way through the veins of commercial activity and household budgeting. So most banks and large credit agencies expect a recession in 2023.

At the same time, a budding crop of economists and major market investors see a firm chance that the economy will avoid a recession, or scrape by with a brief stall in growth, as cooled consumer spending and the easing of pandemic-era disruptions help inflation gingerly trend toward more tolerable levels — a hopeful outcome widely called a soft landing.

“The possibility of getting a soft landing is greater than the market believes,” said Jason Draho, an economist and the head of Americas asset allocation for UBS Global Wealth Management. “Inflation has now come down faster than some recently expected, and the labour market has held up better than expected.”

What seems most likely is that even if a soft landing is achieved, it will be smoother for some households and businesses and rockier for others.

In late 2020 and early 2021, talk of a “K-shaped recovery” took root, inspired by the early pandemic economy’s split between secure remote workers — whose savings, house prices and portfolios surged — and the millions more navigating hazardous or tenuous in-person jobs or depending on a large-yet-porous unemployment aid system.

In 2023, if there’s a soft landing, it could be K-shaped, too. The downside is likely to be felt most by cash-starved small businesses and by workers no longer buoyed by the savings and labour bargaining power they built up during the pandemic.

In any case, more turbulence lies ahead as fairly low unemployment, high inflation and shaky growth continue to queasily coexist.

Generally healthy corporate balance sheets and consumer credit could be bulwarks against the forces of volatile prices, global instability and the withdrawal of emergency-era federal aid. Chief executives of companies that cater to financially sound middle-class and affluent households remain confident in their outlook. Al Kelly, CEO of Visa, the credit card company, said recently that “we are seeing nothing but stability.”

But the Fed’s projections indicate that 1.6 million people could lose jobs by late this year — and that the unemployment rate will rise at a magnitude that in recent history has always been accompanied by a recession.

“There will be some softening in labor market conditions,” Jerome Powell, the Fed chair, said at his most recent news conference, explaining the rationale for the central bank’s recent persistence in raising rates. “And I wish there were a completely painless way to restore price stability. There isn’t. And this is the best we can do.”

Will the bottom 50% backslide?

Over the past two years, researchers have frequently noted that, on average, lower-wage workers have reaped the greatest pay gains, with bumps in compensation that often outpaced inflation, especially for those who switched jobs. But those gains are relative and were often upticks from low baselines.

According to the Realtime Inequality tracker, created by economists at the University of California, Berkeley, inflation-adjusted disposable income for the bottom 50 per cent of working-age adults grew 4.2 per cent from January 2019 to September 2022. Among the top 50 per cent, income lagged behind inflation. But that comparison leaves out the context that the average income for the bottom 50 per cent in 2022 was $25,500 — roughly a $13 hourly pay rate.

“As we look ahead, I think it is entirely possible that the households and the people we usually worry about at the bottom of the income distribution are going to run into some kind of combination of job loss and softer wage gains, right as whatever savings they had from the pandemic gets depleted,” said Karen Dynan, a former chief economist at the Treasury Department and a professor at Harvard University. “And it’s going to be tough on them.”

Consumer spending accounts for roughly 70 per cent of economic activity. The widespread resilience of overall consumption in the past year despite high inflation and sour business sentiment was largely attributed to the savings that households of all kinds accumulated during the pandemic: a $2.3 trillion gumbo of government aid, reduced spending on in-person services, windfalls from mortgage refinancing and cashed-out stock gains.

What’s left of those stockpiles is concentrated among wealthier households.

Most major US banks have reported that checking balances are above prepandemic levels across all income groups. Yet the cost of living is higher than it was in 2019 throughout the country. And depleted savings among the bottom third of earners could continue to ebb while rent and everyday prices still rise, albeit more slowly.

That wonky dynamic could form a deep tension between resilient-looking official data and the sentiment of consumers who may again find themselves with little financial cushion.

Does small business risk falling behind?

Another potential factor for a K-shaped landing could be the growing pressure on small businesses, which have less wiggle room than bigger companies in managing costs. Small employers are also more likely to be affected by the tightening of credit as lenders become far pickier and pricier than just a year ago.

In a December survey of 3,252 small-business owners by Alignable, a Boston-based small-business network with 7 million members, 38 per cent said they had only one month or less of cash reserves, up 12 percentage points from a year earlier. Many landlords who were lenient about payments at the height of the pandemic have stiffened, asking for back rent in addition to raising current rents.

Unlike many large-scale employers that have locked in cheap long-term funding by selling corporate bonds, small businesses tend to fund their operations and payrolls with a mix of cash on hand, business credit cards and loans from commercial banks. Higher interest rates have made the latter two funding sources far more expensive — spelling trouble for companies that may need a fresh line of credit in the coming months. And incoming cash flows depend on sales remaining strong, a deep uncertainty for most.

A Bank of America survey of small-business owners in November found that “more than half of respondents expect a recession in 2023 and plan to reduce spending accordingly.” For a number of entrepreneurs, decisions to maintain profitability may lead to reductions in staff.

Some businesses wrestling with labour shortages, increased costs and a tapering off in customers have already decided to close.

Susan Dayton, a co-owner of Hamilton Street Cafe in Albany, New York, closed her business in the fall once she felt the rising costs of key ingredients and staff turnover were no longer sustainable.

She said the labour shortage for small shops like hers could not be solved by simply offering more pay. “What I have found is that offering people more money just means you’re paying more for the same people,” Dayton said.

That tension among profitability, staffing and customer growth will be especially stark for smaller businesses. But it exists in corporate America, too. Some industry analysts say company earnings, which ripped higher for two years, could weaken but not plunge, with input costs levelling off, while businesses manage to keep prices elevated even if sales slow.

That could limit the bulk of layoffs to less-valued workers during corporate downsizing and to certain sectors that are sensitive to interest rates, like real estate or tech — creating another potential route for a soft, if unequal, landing.

The biggest challenge to overcome is that the income of one person or business is the spending of another. Those who feel that inflation can be tamed without a collapse in the labor market hope that spending slows just enough to cool off price increases, but not so much that it leads employers to lay off workers — who could pull back further on spending, setting off a vicious circle.

What are the chances of a soft landing?

If the strained US economy is going to unwind rather than unravel, it will need multiple double-edged realities to be favourably resolved.

For instance, many retail industry analysts think the holiday season may have been the last hurrah for the pandemic-era burst in purchases of goods. Some consumers may be sated from recent spending, while others become more selective in their purchases, balking at higher prices.

That could sharply reduce companies’ “pricing power” and slow inflation associated with goods. Service-oriented businesses may be somewhat affected, too. But the same phenomenon could lead to layoffs, as slowdowns in demand reduce staffing needs.

In the coming months, the US economy will be influenced in part by geopolitics in Europe and the coronavirus in China. Volatile shifts in what some researchers call “systemically significant prices,” like those for gas, utilities and food, could materialize. People preparing for a downturn by cutting back on investments or spending could, in turn, create one. And it is not clear how far the Fed will go in raising interest rates.

Then again, those risk factors could end up relatively benign.

“It’s 50-50, but I have to take a side, right? So I take the side of no recession,” said Mark Zandi, the chief economist at Moody’s Analytics. “I can make the case on either side of this pretty easily, but I think with a little bit of luck and some tough policymaking, we can make our way through.”