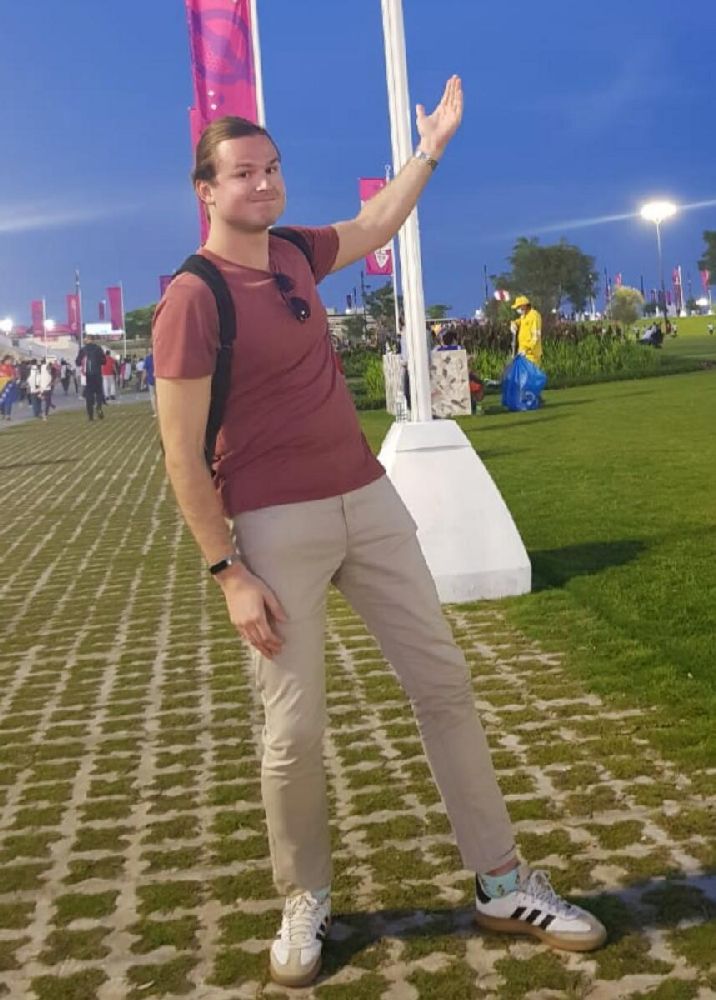 A young Caucasian man was looking out the window on the fan bus to the Al Bayt Stadium when I took the seat next to him. Until I landed in Qatar, I never thought I would be capable of starting conversations with strangers on buses, in metro trains or even in the convenience stores.

But the Fifa World Cup can do amazing things to people.

So there I was, on the bus to the majestic Al Bayt Stadium for the game between the Netherlands and Qatar, itching to talk to this man next to me who I thought was a Dutch fan.

“Are you from the Netherlands?” I asked him, hoping that he would say yes so I could talk to him about my childhood Dutch heroes, Marco van Basten and Dennis Bergkamp.

“No! What made you think I am from the Netherlands?” he responded. I was a little taken aback by his reply.

“Since you’re going [to see] a Netherlands game, I thought you were Dutch,” I said.

With a hint of reluctance, he looked at me and said: “Actually, I am from Russia. I hope that is not a problem!”

By then, I had figured out the reasons behind his hesitation to open up.

“No, people are never the problem,” I said. “I am from India and I work and share meals with so many Pakistani [people] in Dubai – even though the two countries have gone to war thrice.”

It was then that he smiled for the first time.

Mark arrived in Qatar armed with eight match tickets, but it was the Germany-Spain game, the biggest match in the group stages, that he didn’t have a ticket for.

“I just took a chance and kept applying on the Fifa website on the match day. Finally, two hours before the start of the match, I got the ticket. It was very close.”

The 27-year-old man who works for a telecom company in Moscow says it’s an incredible feeling to be able to come from Russia to watch these amazing matches and meet amazing people at the Qatar World Cup.

“I don’t have words to explain [it] actually. I came here to experience the World Cup atmosphere, but I didn’t expect it to be so good, so amazing,” he said.

“I can only say positive things about this World Cup. For me to be here and [enjoy] all the matches and [meet] all these people – it’s like a dream come true.”

Mark’s first dream-come-true moment as a football fan came in 2018 when France, his favourite team, won the World Cup in Moscow, beating Croatia in the final.

“I support France at every World Cup, both in their good times and bad times. I have been a France fan since 2006,” he said.

“When they won the World Cup in Russia (in 2018), many people in my country thought I was supporting them because they became champions.

Mark celebrated the French triumph in Russia at a fan zone with French fans.

“It was an amazing atmosphere. If the team you support is in the final of a World Cup, when they win, it’s wonderful,” he said.

“At the fan zone, it was raining towards the end of the match. I celebrated with French fans, many of them didn’t speak English and I don’t speak French.

“But there was no problem. We were celebrating as one group of fans. It was amazing – my favourite team won the World Cup in my country.”

Mark is not very confident of France’s chances in Qatar as he is wary of the ‘champions curse.’

After Brazil in 1962, every team has failed to take home the World Cup trophy after winning the previous edition.

Regardless of France’s World Cup campaign, Mark will take home something beautiful from Qatar.

“The other day, I was [eating] at the small café with my roommate from Siberia when we met [a] man. He turned out to be the father of Jonathan Williams, who is playing for the Wales team here at the World Cup,” Mark said.

“When he realised that I came from Russia for the World Cup, he was so happy that gave me this,” Mark said, while showing me the emblem of the Wales football team.

“It was amazing to receive that because I remembered that I had picked Jonathan Williams many years ago in the Fifa (video) game for my team!”

The World Cup can do amazing things to people. This Russian football fan, who was a little hesitant to open up to me at first, gave me a warm hug as we said goodbye.