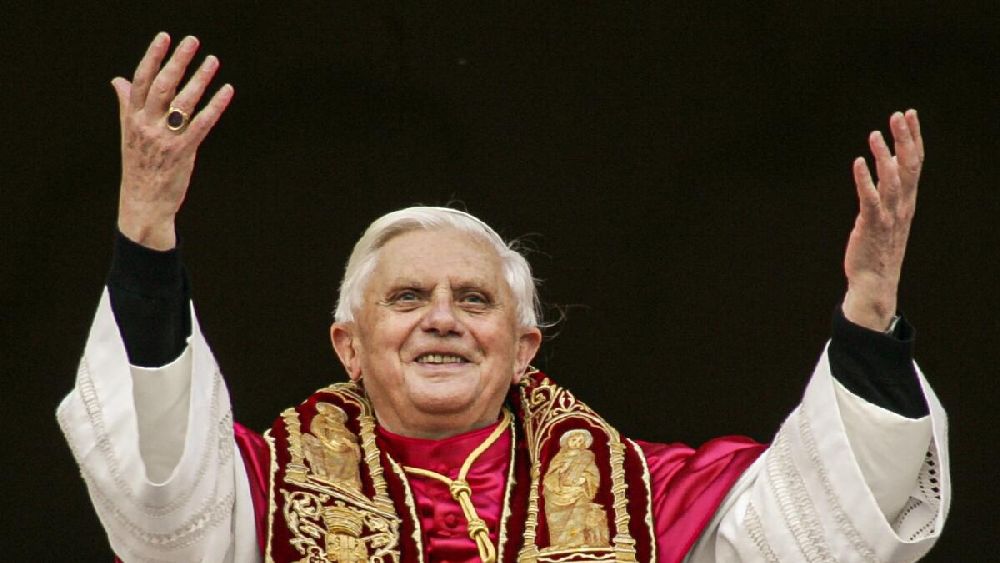 The Vatican says Pope Emeritus Benedict XVI has died. He was 95.

Benedict was the first pope in 600 years to resign. Benedict had become increasingly frail during his almost 10 years of retirement.

Benedict’s dramatic decision in 2013 to resign paved the way for the conclave that elected Pope Francis. The two popes then lived side-by-side in the Vatican gardens in an unprecedented arrangement that set the stage for future “popes emeritus” to do the same.

The former Cardinal Joseph Ratzinger never wanted to be pope. But he was forced to follow in St. John Paul II’s footsteps, running the church during a period of scandal and indifference.

The Vatican says that Pope Francis will celebrate the funeral Mass for Pope Emeritus Benedict XVI in St. Peter’s Square on Thursday.

It will be an unprecedented event in which a current pope will celebrate the funeral for a former one.

Here are some reactions to his passing:

1. Ireland’s president has paid tribute to the late Pope Benedict XVI, highlighting his interest in promoting peace in Northern Ireland.

President Michael D. Higgins said in a statement that “at this time of the return of war on our continent and in so many areas of the world, he will be remembered for his untiring efforts to find a common path in promoting peace and goodwill throughout the world, including a steadfast interest in peace in Northern Ireland.”

The leader of the Catholic Church in Ireland, Eamon Martin, recalled Benedict’s “humility and gentleness” and praised the former pontiff’s reaction to the abuse scandal in the church. Martin recalled how after meeting with Irish bishops in 2010, Benedict issued a letter to Irish Catholics “expressing profound sorrow” for abuse victims before calling for urgent action to address the legacy of abuse.

2. The head of the Lutheran Church of Sweden has expressed his sympathies with Catholics around the world.

Archbishop Martin Modeus wrote on Twitter that “our churches have different traditions and our ways of thinking have sometimes differed, but Benedict XVI had a great impact on the rapprochement of Lutherans and Catholics in the last 50 years.”

3. A US advocacy organization is mourning the death of a “true friend of the Jewish people’’ in Pope Emeritus Benedict XVI.

The American Jewish Committee said in a statement Saturday that “Benedict continued the path of reconciliation and friendship with world Jewry blazed by his predecessor, John Paul II.”

The organisation noted that Benedict had “paid homage in Auschwitz” to the victims of the Holocaust and had made an official visit to Israel.

It said that “he condemned antisemitism as a sin against God and man, and he emphasized the unique relationship between Christianity and Judaism.’

4. Germany’s president is praising the late Pope Benedict XVI’s dedication to dialogue between Christian denominations and with other religions.

President Frank-Walter Steinmeier said in a message of condolences to Pope Francis that “the election of a pope from the motherland of the Reformation and an intellectual who had made the dialogue between faith and reason his life’s task was an important signal for many people around the world.”

Steinmeier said that the German-born pontiff “particularly cared about the unity of Christendom and the dialog of religions, the connection between religion and society.” He added that “he sought dialog with Jews and Muslims and with all Christian denominations worldwide.”

5. Italian President Sergio Mattarella said the death of the pope emeritus is a cause for grief for the entire country.

Mattarella said that “his sweetness and his wisdom had benefited our community and the entire international community.”

He added in a statement that Benedict “continued to serve the cause of his Church in his unique role of pope emeritus with humility and serenity.″ The president said that Benedict “interpreted with finesse the reasons of dialogue, of peace, of the dignity of the person, as well as the supreme interests of religions.”

6. The spiritual head of the Anglican church says that “in his life and ministry, Pope Benedict XVI directed people to Christ.”

The archbishop of Canterbury, Justin Welby, wrote on Twitter: “I join with Pope Francis and all the Catholic Church in mourning his death. May he rest in Christ’s peace and rise in glory with all the Saints.”

7. In predominantly Lutheran Norway, the Catholic bishop of Oslo, Bernt Ivar Eidsvig, called Benedict “the last great theologian of the past 100 years.”

Eidsvig told Norwegian broadcaster NRK that “He masters all the theological subjects. I cannot think of anyone else who does.”

8. Italian Premier Giorgia Meloni has called Pope Benedict XVI a “giant of faith and reason” that history will never forget.

In a statement, she praised his lifelong service to the church and ability to “speak to the hearts and minds of people with the spiritual, cultural and intellectual profundity of his magisterium.”

She said she offered Pope Francis her own personal condolences, and those of the government, in sharing “his pain and that of the entire ecclesial community.”

9. German Chancellor Olaf Scholz is paying tribute to the German-born Pope Emeritus Benedict XVI as a “formative figure of the Catholic Church.”

Benedict, the former Cardinal Joseph Ratzinger, became the first German pope in centuries when he was elected in 2005.

Scholz said on Twitter Saturday that “as the ‘German’ pope, Benedict XVI was a special church leader for many, not just in this country.”

He said that “the world is losing a formative figure of the Catholic Church, a combative personality and a wise theologian.”

10. The governor of Benedict XVI’s native German region says that “we are mourning our Bavarian pope.”

Bavarian governor Markus Soeder said on Twitter Saturday that “with him, society is losing a persuasive representative of the Catholic Church and one of the most influential theologians of the 20th century.”

Soeder wrote that “many people in his homeland will remember him not just as pope, but also as a humble pastor.”

He noted that “at the same time, he also had to face responsibility for difficult phases in his work.”

The governor said that “he always carried his homeland in his heart.”

The head of the German Bishops’ Conference, Limburg Bishop Georg Baetzing, said that “an impressive theologian and experienced shepherd is leaving us with the death of Pope Emeritus Benedict XVI.”

“We are mourning a personality who imparted hope and direction to the church even in difficult times,” Baetzing said in a statement. He voiced “great respect” for Benedict’s “courageous decision” to resign a decade ago.