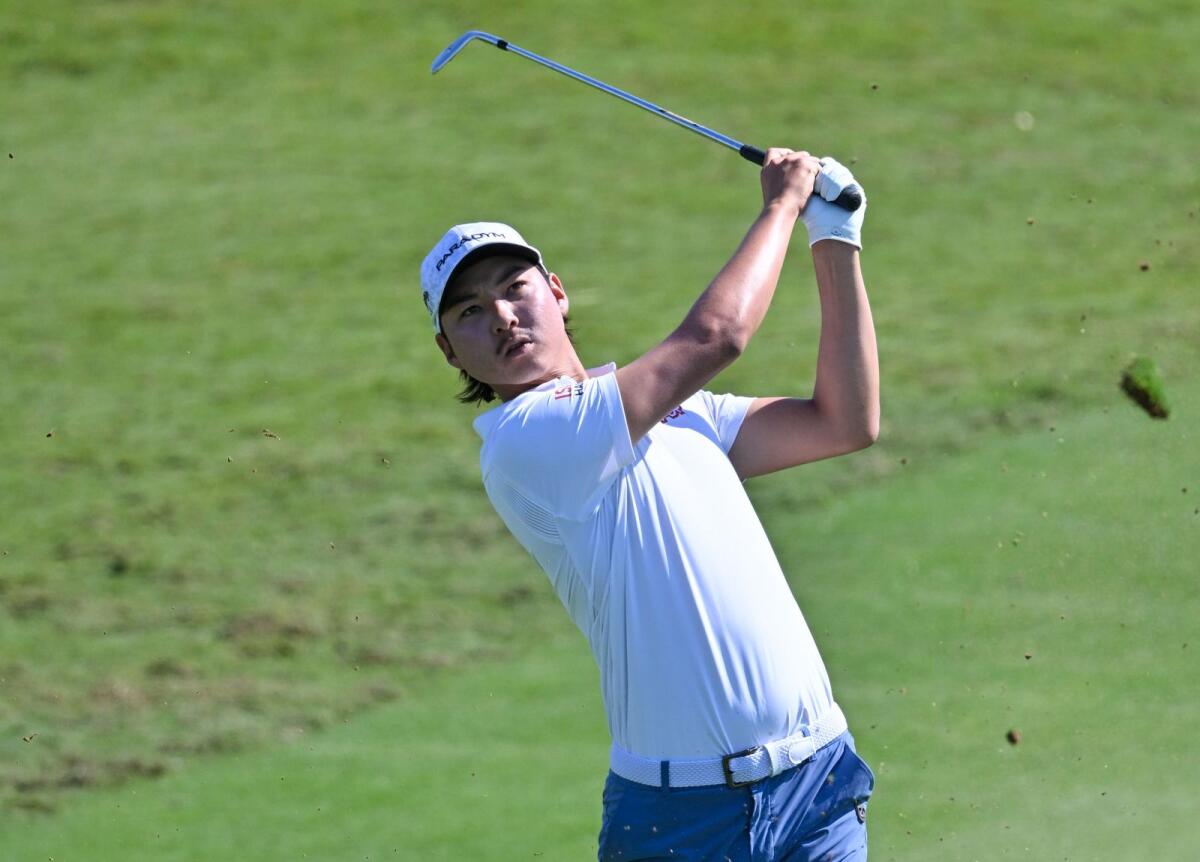 Min Woo Lee, one of golf’s rising stars and Guinness Book record holder, has a startling and unique perspective on golf — he doesn’t care about winning.

Interestingly Lee, who required just 24.75 seconds to record the fastest hole of golf by a team of four at the Real Club Valderrama, Spain, in 2021, prefers to take it one shot at a time.

The Australian golfer finished runner-up to Victor Perez at last week’s Abu Dhabi Golf Championship where he, at one point, even topped the leaderboard with 2019 Champion Shane Lowry.

Looking ahead to this week’s Hero Dubai Desert Classic at the Emirates Golf Club, Lee will be hoping to build on his strong form, but by doing it his way.

“It’s been awesome. It was a close call last week,” he said on Tuesday. “The form has been just out of nowhere and I think putting less pressure on myself and doing the best I can on each shot is nice.”

Lee, whose South Korean parents immigrated to Australia in the nineties, has been in impressive form over the last seven tournaments where he enjoyed five Top 5 finishes.

And he attributed his success to being a bit more relaxed and less demanding on himself.

“I think it’s just not caring about winning too much,” he said. “It’s funny, because it’s just the realisation, if I didn’t play well in the Spain events, I would have taken time off and not made it to DP World Tour Championship because I think I just didn’t really care how I went.

“I ended up playing well and strung a lot of Top 5s together. My worst is Top-12 in the last seven events. So I think it’s a bit of both technical and a bit of mental approach, I guess.”

Lee admitted that he’s a bit of a stranger to the Emirates Golf Club’s Majlis Course where he hasn’t “played that much.”

”I think I played here once or twice,” he said. “I haven’t seen the course yet, so I’m going to go out there and do nine holes in the Pro-Am tomorrow (Wednesday).

“I think it’s a course where it suits longer hitters, which is nice, but I’ve heard the rough is up, so I need to hit it somewhat straight.”

Despite not wanting to put too much pressure on himself, Lee is still focused on the goals that he has set for himself for 2023, where he aims to get into the Majors and play the Masters.

Making it into the world ranking Top-50 is another top priority for Lee, who together with his golf-loving sister Minjee Lee, made history by becoming the first brother/sister pair to win the USGA’s junior championships, Minjee Lee having won the US Girls’ Junior in 2012.

Commenting on his ascent up the rankings, Lee said: “I’m slowly creeping up to that Top-50 stage. I think that’s one of my goals for the first half of the year, and I guess world ranking-wise, just get as low as I can and try to get to the top 30, Top-25 by the end of the year.”

But for the moment it will be the Majlis Course that has the attention of this exciting 24-year-old from Perth.

Sports
. The Asian Cricket Council will decide on an alternate venue for the Asia

Sports
. Zander Lombard will take a narrow one-shot lead into the final round of