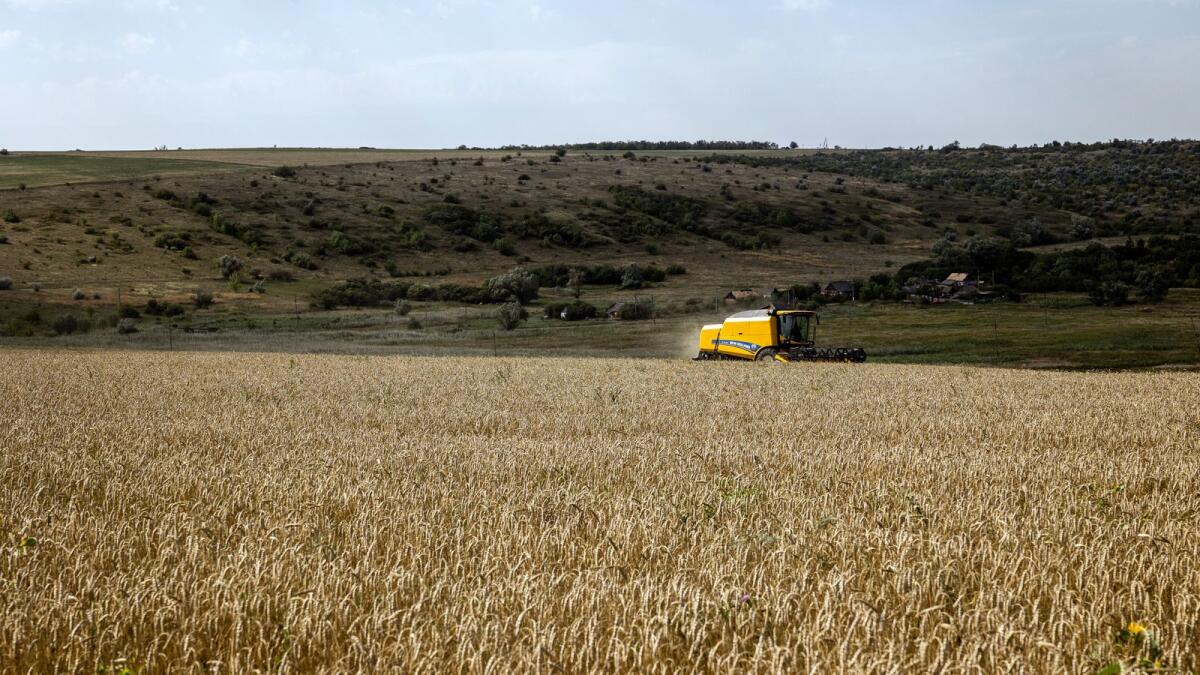 Hulking ships carrying Ukrainian wheat and other grains are backed up along the Bosporus here in Istanbul as they await inspections before moving on to ports around the world.

The number of ships sailing through this narrow strait, which connects Black Sea ports to wider waters, plummeted when Russia attacked Ukraine 10 months ago and imposed a naval blockade. Under diplomatic pressure, Moscow has begun allowing some vessels to pass, but it continues to restrict most shipments from Ukraine, which together with Russia once exported a quarter of the world’s wheat.

And at the few Ukrainian ports that are operational, Russia’s missile and drone attacks on Ukraine’s energy grid periodically cripple the grain terminals where wheat and corn are loaded onto ships.

An enduring global food crisis has become one of the farthest-reaching consequences of Russia’s war, contributing to widespread starvation, poverty and premature deaths.

The United States and allies are struggling to reduce the damage. American officials are organising efforts to help Ukrainian farmers get food out of their country through rail and road networks that connect to Eastern Europe and on barges travelling up the Danube River.

But as deep winter sets in and Russia presses assaults on Ukraine’s infrastructure, the crisis is worsening. Food shortages are already being exacerbated by a drought in the Horn of Africa and unusually harsh weather in other parts of the world.

The United Nations World Food Programme estimates that more than 345 million people are suffering from or at risk of acute food insecurity, more than double the number from 2019.

“We’re dealing now with a massive food insecurity crisis,” Antony Blinken, the US secretary of state, said last month at a summit with African leaders in Washington. “It’s the product of a lot of things, as we all know,” he said, “including Russia’s aggression against Ukraine.”

The food shortages and high prices are causing intense pain across Africa, Asia and the Americas. US officials are especially worried about Afghanistan and Yemen, which have been ravaged by war. Egypt, Lebanon and other big food-importing nations are finding it difficult to pay their debts and other expenses because costs have surged. Even in wealthy countries like the United States and Britain, soaring inflation driven in part by the war’s disruptions has left poorer people without enough to eat.

“By attacking Ukraine, the breadbasket of the world, Putin is attacking the world’s poor, spiking global hunger when people are already on the brink of famine,” said Samantha Power, administrator of the US Agency for International Development, or USAID.

Ukrainians are likening the events to the Holodomor, when Josef Stalin engineered a famine in Soviet-ruled Ukraine 90 years ago that killed millions.

Blinken announced Dec. 20 that the US government would begin granting blanket exceptions to its economic sanctions programs worldwide to ensure that food aid and other assistance kept flowing. The action is intended to ensure that companies and organizations do not withhold assistance for fear of running afoul of US sanctions.

State Department officials said it was the most significant change to US sanctions policy in years. The UN Security Council adopted a similar resolution on sanctions last month.

Moscow has restricted its own exports, increasing costs elsewhere. Most important, it has stopped sales of fertilizer, needed by the world’s farmers. Before the war, Russia was the biggest exporter of fertilizer.

Its hostilities in Ukraine have also had a major effect. From March to November, Ukraine exported an average of 3.5 million metric tons of grains and oilseeds per month, a steep drop from the 5 million to 7 million metric tons per month it exported before the war began in February, according to data from the country’s Ministry of Agrarian Policy and Food.

That number would be lower if not for an agreement forged in July by the United Nations, Turkey, Russia and Ukraine, called the Black Sea Grain Initiative, in which Russia agreed to allow exports from three Ukrainian seaports.

Russia continues to block seven of the 13 ports used by Ukraine. (Ukraine has 18 ports, but five are in Crimea, which Russia seized in 2014.) Besides the three on the Black Sea, three on the Danube are operational.

The initial deal was only for four months but was extended in November for another four months. When Russia threatened to leave it in October, global food prices surged 5 per cent to 6 per cent, said Isobel Coleman, a deputy administrator at USAID.

“The effects of this war are hugely, hugely disruptive,” she said. “Putin is pushing millions of people into poverty.”

While increases in the price of food last year have been particularly sharp in the Middle East, North Africa and South America, no region has been immune.

“You’re looking at price increases of everything from 60 per cent in the US to 1,900 per cent in Sudan,” said Sara Menker, CEO of Gro Intelligence, a platform for climate and agriculture data that tracks food prices.

Before the war, food prices had climbed to their highest levels in over a decade because of pandemic disruptions in the supply chain and pervasive drought.

The United States, Brazil and Argentina, key grain producers for the world, have experienced three consecutive years of drought. The level of the Mississippi River fell so much that the barges that carry American grain to ports were temporarily grounded.

The weakening of many foreign currencies against the U.S. dollar has also forced some countries to buy less food on the international market than in years past.

“There were a lot of structural issues, and then the war just made it that much worse,” Menker said.

Many farmers in Ukraine have gone to war or fled their land, and the infrastructure that processed and carried wheat and sunflower oil to foreign markets has broken down.

At a farm 190 miles south of Kyiv, 40 of the 350 employees have enlisted in the army. And the farm is struggling with other shortages. Kees Huizinga, the Dutch co-owner, said Russia’s attacks on the energy grid have led to the shutdown of a plant that provides his farm and others with nitrogen fertilizer.

Other fertilizer plants in Europe were forced to shut down or slow production last year as natural gas prices soared, a result of the war. Natural gas is critical for fertilizer production.

“So this year’s harvest has already been reduced,” Huizinga said in November. “And if Russians continue like this, next year’s harvest might even be worse.”

He added that transportation costs have risen sharply for farmers in Ukraine.

Before the war, farmers shipped out 95 per cent of the country’s wheat and grain exports through the Black Sea. Huizinga’s farm paid $23 to $24 per ton to transport its products to ports and onto ships. Now, the cost has more than doubled, he said. And an alternative route — by truck to Romania — costs $85 per ton.

Huizinga said Russia’s compromise on Black Sea shipments has helped, but he suspected Moscow is hobbling operations by slowing inspections.

Under the arrangement, each vessel leaving one of three Ukrainian ports on the Black Sea has to be inspected by joint teams of Ukrainian, Russian, Turkish and UN employees once the ship reaches Istanbul.

The teams look for any unauthorised cargo or crew members, and vessels heading to Ukraine need to be empty of cargo, said Ismini Palla, a spokesperson for the U.N. office overseeing the program.

UN data shows that the rate of inspections has dropped in recent weeks. The parties agreed to deploy three teams each day, Palla said, adding that the United Nations has requested more.

“We hope that this will change soon, so that the Ukrainian ports can operate again at higher capacity,” she said. “Ukrainian exports remain a vital element in combating global food insecurity.”

Palla said the parties’ decision in November to extend the agreement contributed to a 2.8 per cent drop in global wheat prices.

Over the last six months, food prices have retreated from highs reached in the spring, according to an index compiled by the United Nations. But they remain much higher than in previous years.

An uncertainty for farmers this winter is the soaring price of fertilizer, one of their biggest costs.

Farmers have passed on the higher cost by increasing the price of food products. And many farmers are using less fertilizer in their fields. That will result in lower crop yields in the coming seasons, pushing food prices higher.

Subsistence farms, which produce nearly a third of the world’s food, are being hit harder, Coleman said.

In a communiqué issued at the close of their meeting in Bali, Indonesia, in November, leaders of the Group of 20 leading rich and developing nations said they were deeply concerned by the challenges to global food security and pledged to support the international efforts to keep food supply chains functioning.

“We need to strengthen trade cooperation, not weaken it,” Ngozi Okonjo-Iweala, director-general of the World Trade Organization, said at the summit.

The US government spends about $2 billion per year on global food security, and it started a program called Feed the Future after the last big food crisis, in 2010, that now encompasses 20 countries.

Since the start of the Ukraine war, the United States has provided more than $11 billion to address the food crisis. That includes a $100 million program called AGRI-Ukraine, which has helped about 13,000 farmers in Ukraine — 27 per cent of the total — gain access to financing, technology, transportation, seeds, fertilizer, bags and mobile storage units, Coleman said.

The efforts could help rebuild the country while alleviating the global food crisis — one-fifth of Ukraine’s economy is in the agriculture sector, and a fifth of the country’s labour force is connected to it.