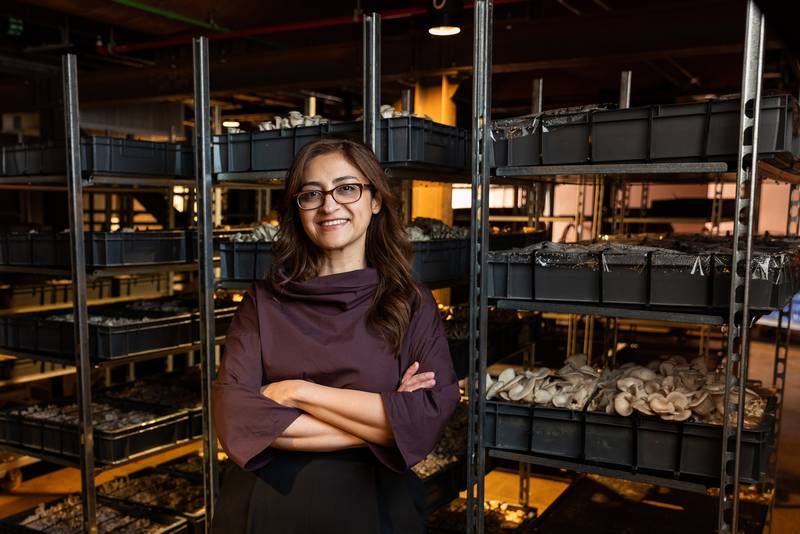 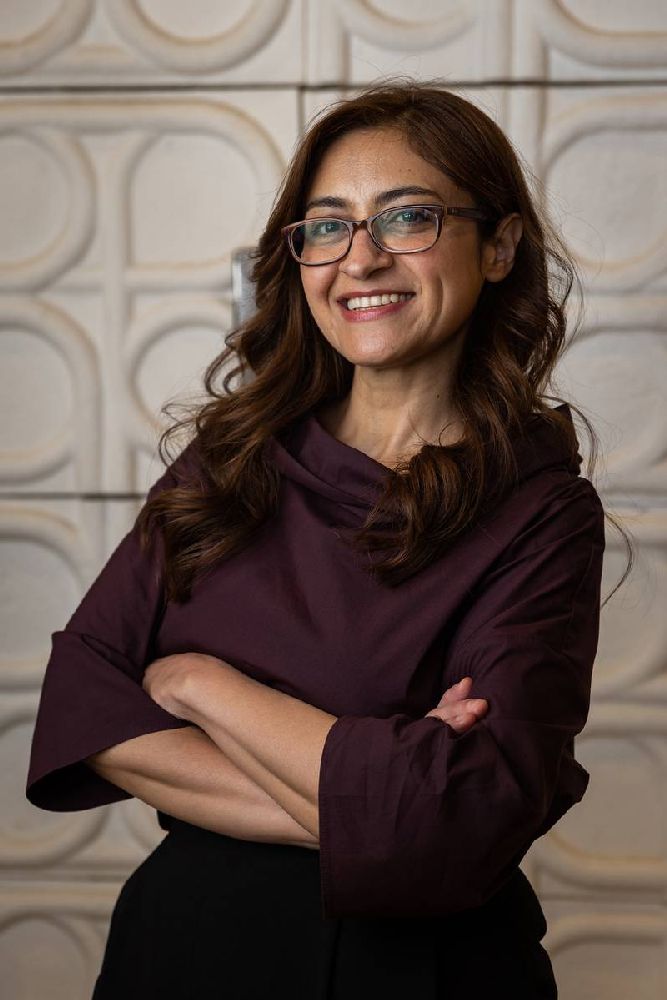 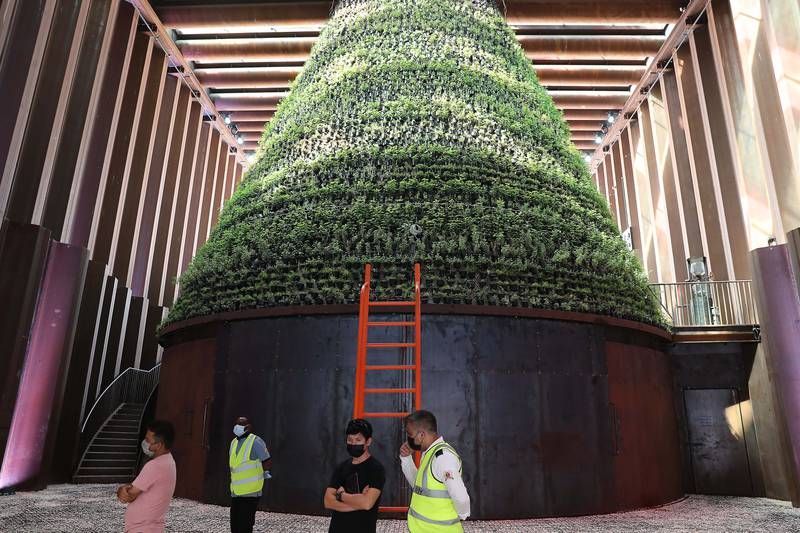 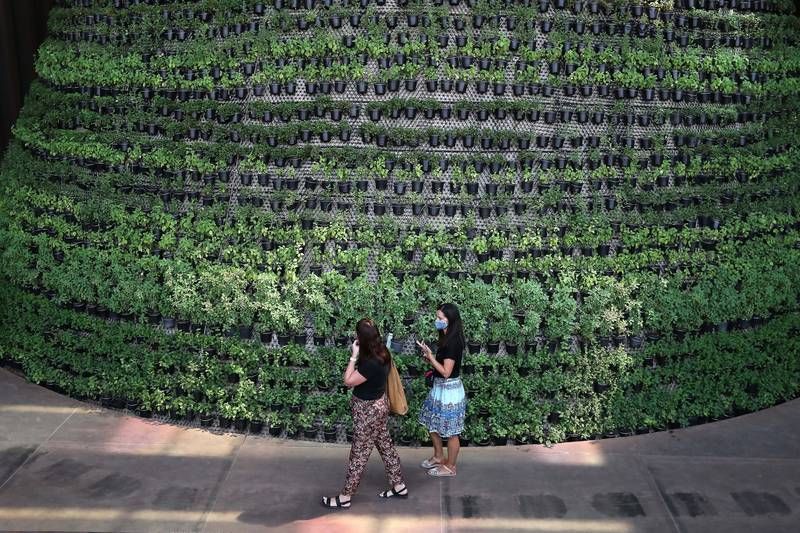 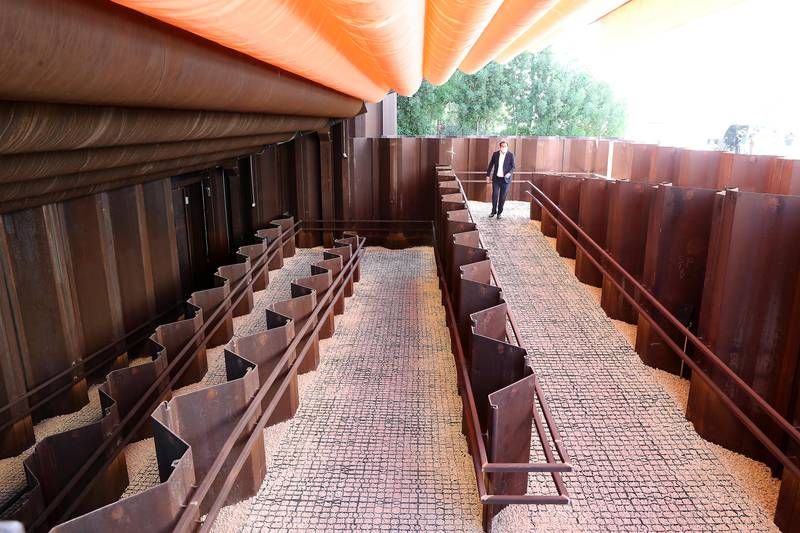 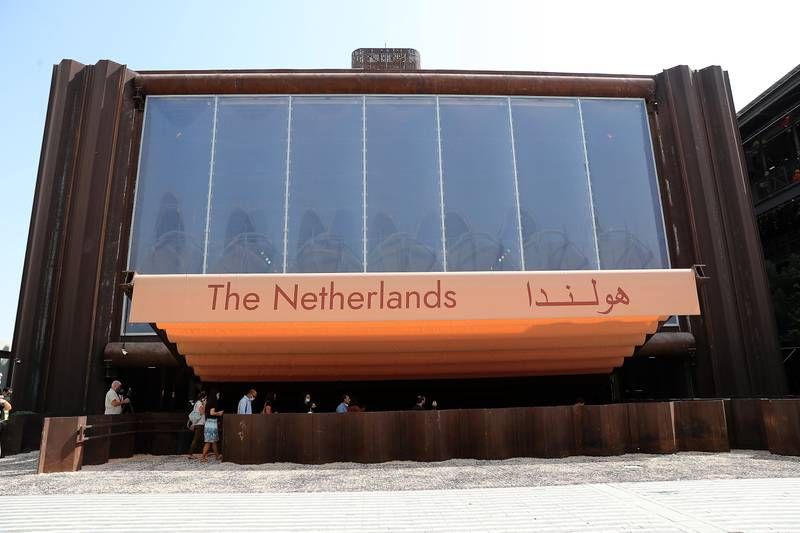 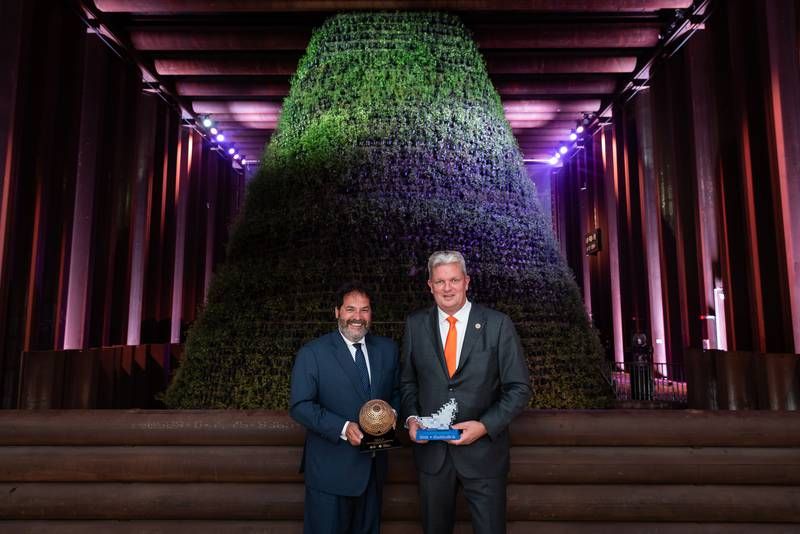 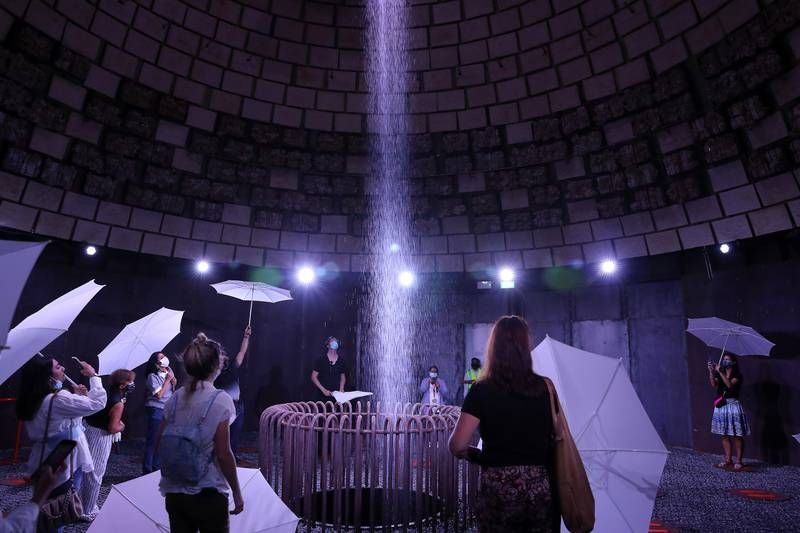 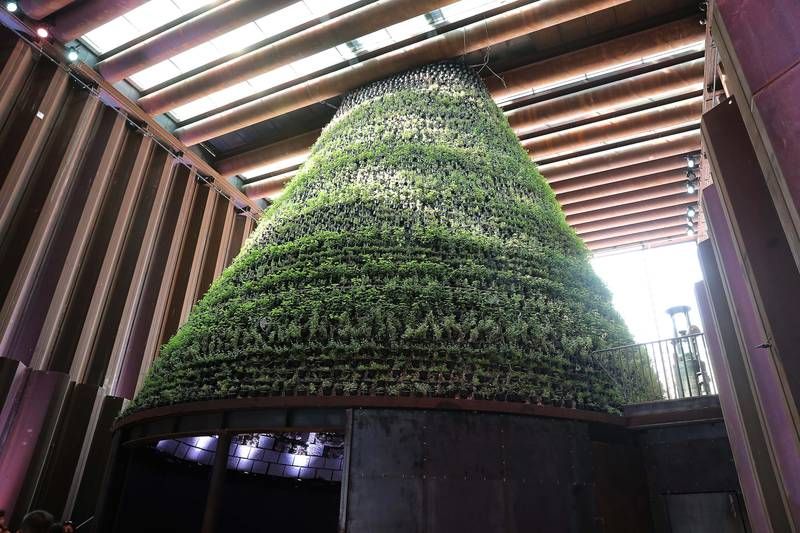 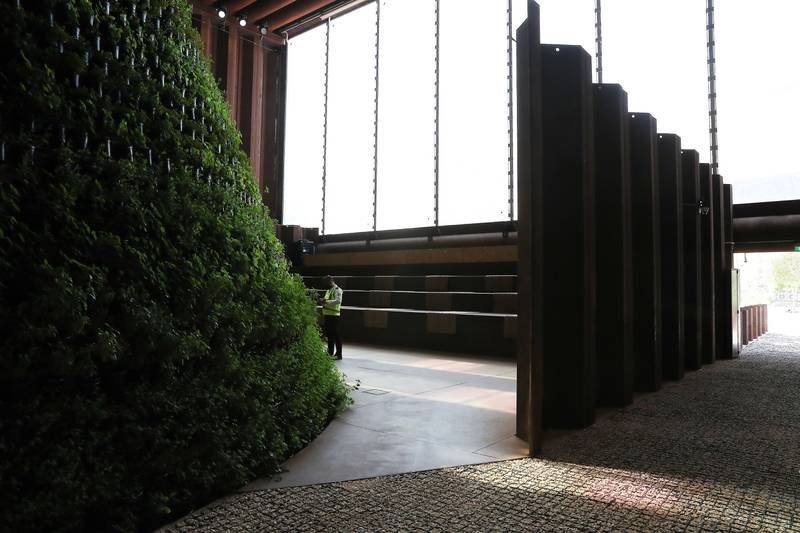 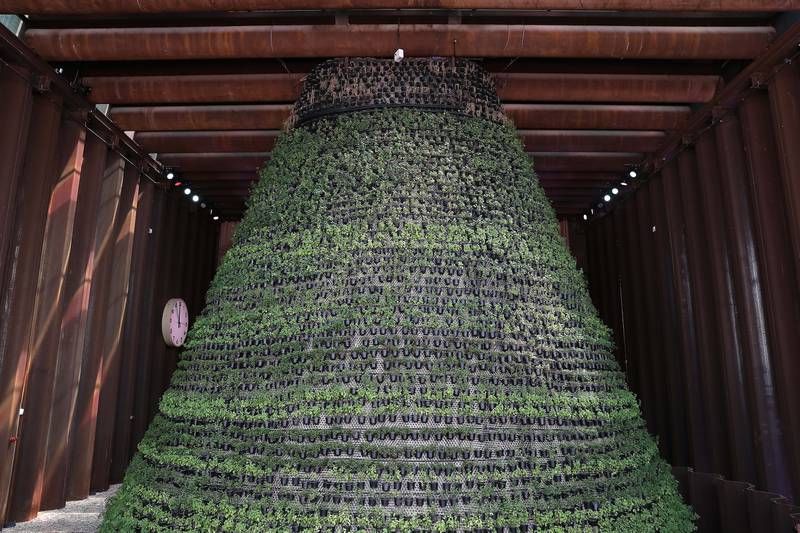 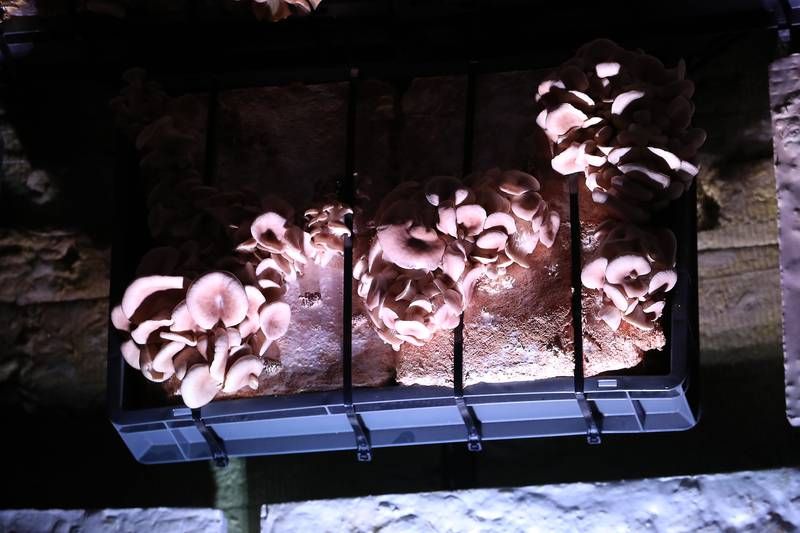 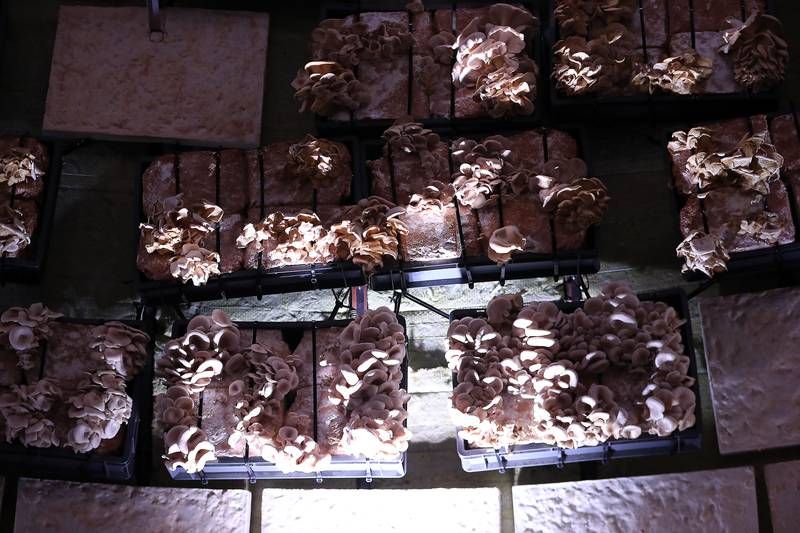 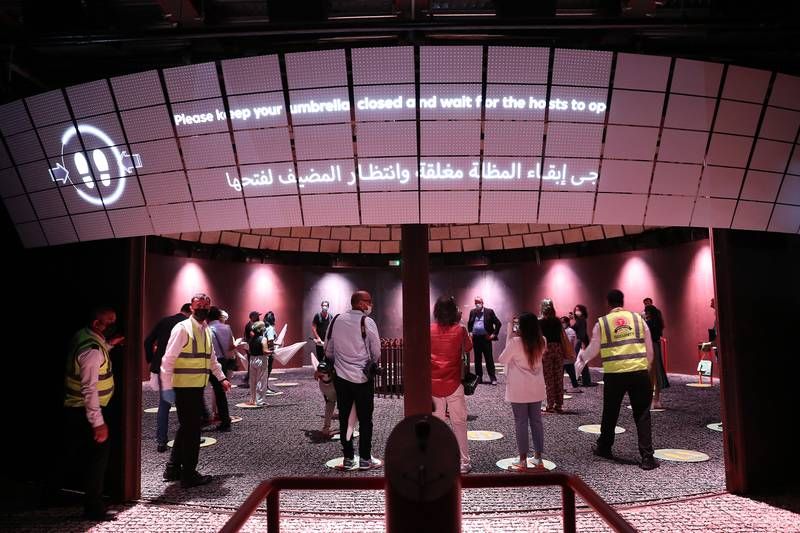 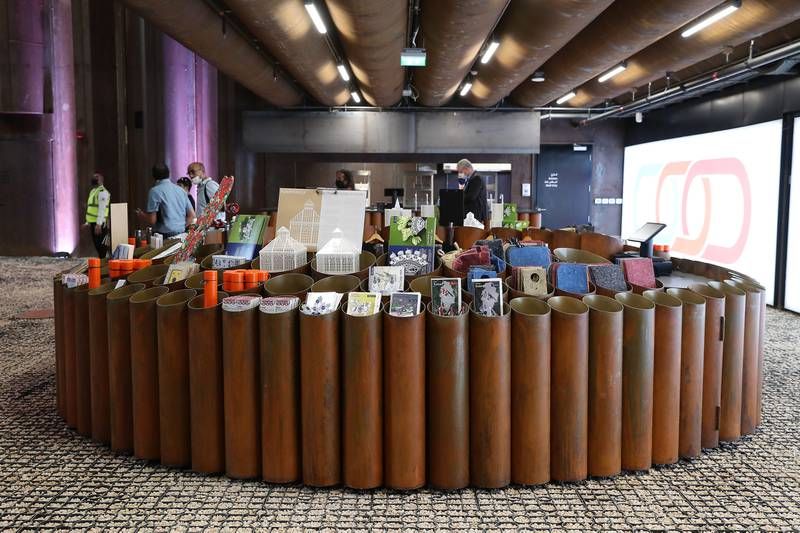 UAE entrepreneur Dima Al Srouri has taken over a mushroom nursery from the Netherlands pavilion and will continue the production of mushrooms and mycelium products in Dubai. Photo: Netherlands Pavilion Expo 2020 Dubai

The dismantling of pavilions at the Expo 2020 Dubai site has begun in earnest.

Some country pavilions, such as those of the UAE, Saudi Arabia and India, will remain, while others have begun taking down exhibits and started the process of packing up installations, technology equipment and plants for recycling and reuse.

Among the many is the Netherlands pavilion, which is being hailed as the perfect example of circular construction, with many of its elements being reused or rehomed in the coming months.

The pavilion structure was built without concrete, with its entire foundation instead based on steel plates.

Pavilion organisers leased 2,000 tonnes of steel sheet piles and 18-metre tubes that made up the roof, which will be returned to companies in the UAE to be used in future construction projects.

The plan from the drawing board stage was for the plot to be left as it was received in 2018 — an empty piece of desert land.

“Our legacy is to give back to nature and leave the land as we found it,” Carel Richter, the Netherlands consul general and pavilion commissioner told The National.

“Our physical footprint will be minimal. Our story about creating a sustainable future continues.”

Mushrooms to sprout in Dubai warehouse

A giant cone blanketed with edible plants, cress and mushrooms formed the centrepiece of the Netherlands pavilion.

A mushroom farm housed inside the cone, which showed how herbs and food could grow in the desert, has been bought by a UAE entrepreneur.

During the six months of Expo, people queued up to see a structure that captured energy from the sun and extracted moisture from the air to make it rain in the desert.

Large oyster mushrooms were placed inside the darkened interior of the towering cone covered with plants.

The mushroom farm nurtured inside the pavilion will find a new home in a Dubai warehouse. 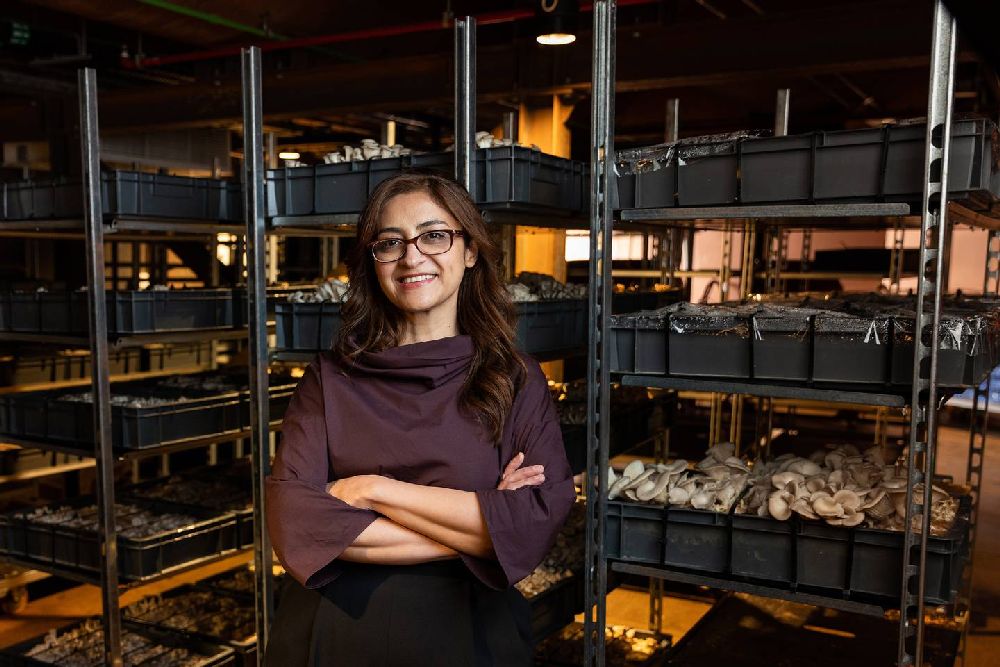 UAE entrepreneur Dima Al Srouri has taken over a mushroom nursery from the Netherlands pavilion and will continue the production of mushrooms and mycelium products in Dubai. Photo: Netherlands Pavilion Expo 2020 Dubai

Dima Al Srouri, a UAE urban planner who is passionate about growing produce locally, purchased the system from Dutch suppliers.

“We have a disconnect from food systems. People don’t know where food comes from and we feel that they would get excited if they know the process and see how it’s grown,” said Ms Al Srouri, a lecturer at Abu Dhabi’s Sorbonne University.

“That gives a lot of trust in the product and people feel connected to their food.

“The Expo was a great platform that connected like-minded people to explore sustainable solutions.”

Harvesting equipment, including mixing machines, shelves and containers with hundreds of oyster mushrooms, are being placed in a container at the Expo site before being transported to the warehouse, the location of which has yet to be revealed.

Ms Al Srouri has plans for a summer opening of the repurposed farm that will sell to restaurants and be used as an educational facility.

Similar to what was done in the Dutch pavilion, some of the mushrooms will be used in mycelium products, a biodegradable fungus-based substance used in building material.

The floor tiles and wall panels in the pavilion’s lounge were all made from mycelium.

“It will not be just oyster mushrooms, there will be other mushrooms and mycelium products and we will be collaborating with other entities on this,” Ms Al Srouri said.

“It’s a circular economy model where we are reusing instead of throwing away. We are looking at designing the farm with lots of reused material from the pavilion.

“So it’s a memory and the legacy of the pavilion will actually stay with us.”

Steel roof and floors to be reused 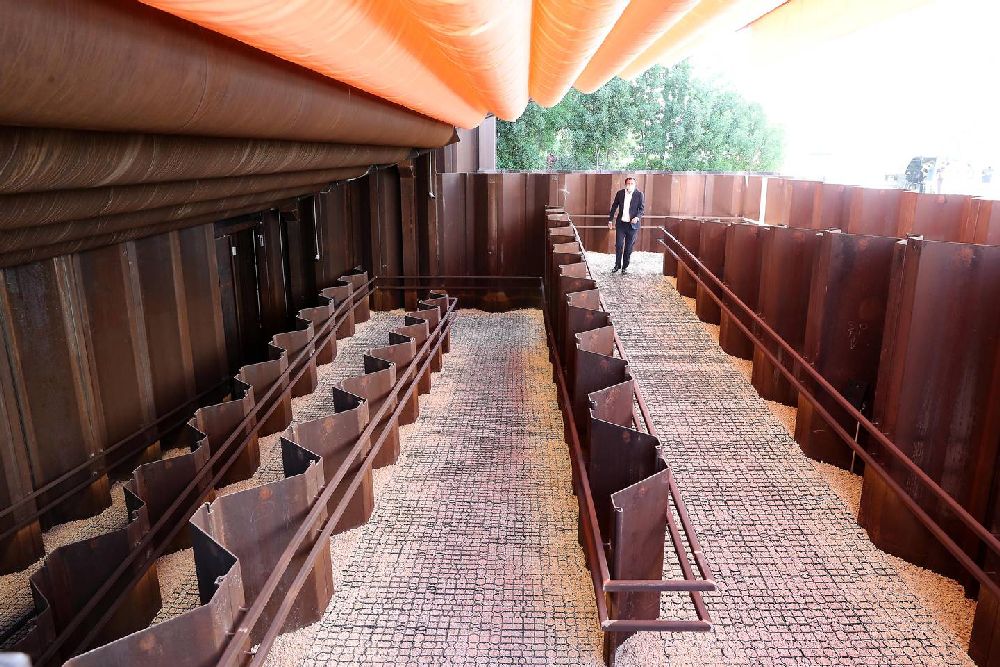 The 2,000 tonnes of steel sheets used to construct the Netherlands pavilion at Expo 2020 Dubai will be handed over for reuse in construction projects in the city. Pawan Singh / The National

In line with its strategy to keep the pavilion’s ecological footprint as small as possible, all installations — even the lift that was leased — will be reused.

“The Netherlands pavilion is our very first building that will be dismantled and we are proud of that,” said Michiel Raaphorst, co-founder of V8 Architects, the pavilion designers.

“We chose to use local materials since the Expo is a temporary event and to return the materials after Expo closed its doors.”

Lighting fixtures and furniture are being donated to a charity organisation in Dubai.

The floor was made from local sand and gravel with leased prefabricated pavement mats.

These will be lifted, dismantled and returned to suppliers for use as temporary pavements elsewhere in the city.

Sheet piles for the walls and steel tubes on the roof will be taken back by Meever & Meever, a Dutch steel company, for reusing in construction projects in Dubai.

More than 9,000 herbs and plants on the towering cone will be returned to the local supplier to be turned into compost. A local greenhouse will reuse the irrigation systems and the long hoses will be recycled.

A system that harvested hundreds of litres of water daily from moisture in the air will be shipped back to the Netherlands for use in new projects.

Solar panels on the roof were also leased locally and are being installed elsewhere in the city.

Talks are continuing about the use of organic and transparent photovoltaic panels that were designed by an award-winning Dutch designer.

In line with the aim of the world’s fair, organisers were committed to sharing knowledge.

“Leaving behind an empty plot and making sure the materials are reused or repurposed is in fact the essence of a circular approach: to use materials for the remainder of their lifespan,” Mr Raaphorst said.

“The pavilion is as such a blueprint for circular construction.”