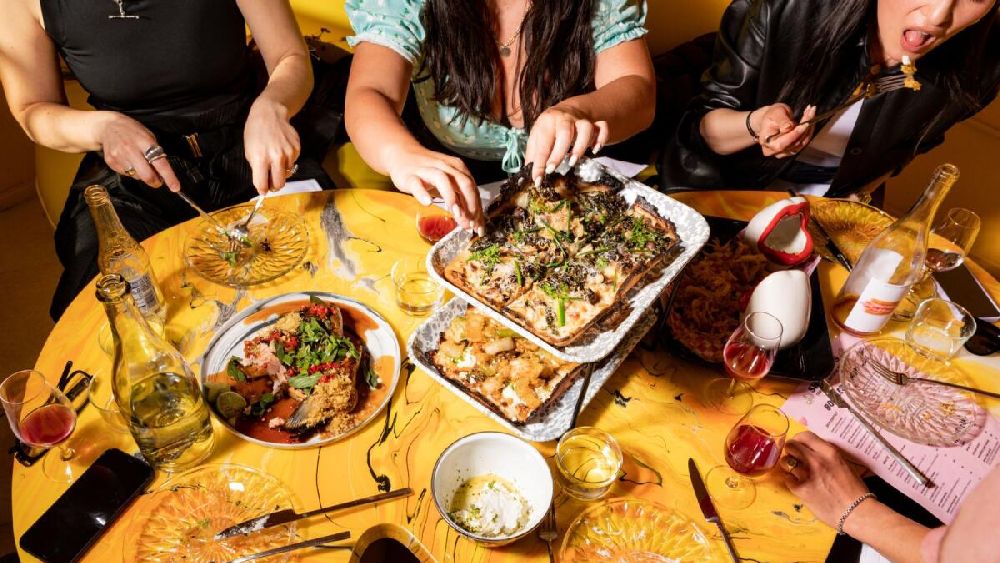 Nearly every big change in how we eat starts as a fad, which is really just a shared moment among a subset of diners or cooks that gains traction. Some fads fade away slowly, like wine coolers or molecular gastronomy. Others implode suddenly, like turmeric lattes or the pink sauce that shot up like a rocket on TikTok this year and then exploded.

There are fads that build into trends and then become woven into the fabric of our day. Who knew that a fringe interest in custom-roasted coffee beans in 1960s Berkeley, California, would lead to Starbucks?

It’s hard to tell the fleeting from the lasting, but that doesn’t keep a lot of people from trying. I waded through dozens of reports and news releases, and interviewed the best food forecasters in the game to peer into the 2023 food crystal ball.

In a time of inflation, climate change and global tensions, some predictions seem grim. “We’re fatigued,” said Jennifer Zegler, a director of food and drink for the global market research group Mintel. “Simplicity, versatility, escapism and resourcefulness are what our trends boil down to this year.”

All is not bleakness. High-end Jell-O shots, bright naturally coloured fare and packaging that evokes the ’70s are in. Food and drinks that make you feel healthier will continue to proliferate, too. “People want something fun, and they want newness and they want natural,” said Claire Lancaster, who forecasts food and drink trends for WGSN.

Here are 10 interpretations of the tea leaves.

Flavour of the Year

Embrace the brine. Fresh, bracing marine flavours have spawned a craze for coastal cocktails garnished with crab claws and oysters. Dan Levy, the actor and host of “The Big Brunch,” is making Clamato cool. Sea vegetables like kelp and sea creatures like uni have secured spots on several trend lists.

Word of the Year

Calling yourself a climatarian is so 2022. The new term is regenivore. It’s no longer about eating sustainably, which implies a state of preserving what is. A new generation wants food from companies that are actively healing the planet through carbon-reducing agriculture, more rigorous animal welfare policies and equitable treatment of the people who grow and process food.

Look for big changes to reduce waste in packaging. More chefs will use what Mintel calls “climate hero ingredients” like teff, fava and lupin beans, and more diners will choose food and drink that improve their health and the planet’s. Even the alcohol industry has started throwing around words like eco-alignment. “These companies don’t want to just be seen as doing the right thing daily,” said Joan Driggs, who studies retail trends and consumer packaged goods for IRI, a data analysis company. “They want to be really seen as making a positive difference.”

Snack of the Year

Chicken skins have been trying to elbow out buffalo wings for some time, but this may be their year. Riding the wave of an obsessive interest in all forms of fried chicken, crispy chicken skins are the base for nachos at pop-ups, and sauced and spiced as appetizers in restaurants. Rising chicken prices have chefs looking for ways to get more from the bird. Asian cuisines that regularly use chicken skins are providing culinary inspiration.

Chris Moyer, the executive chef for Perdue, placed the skins high on his list of most promising chicken products and likes them in place of croutons in salads or as toupées for roasts. And then there is the crunch factor, which more than 70% of consumers say they look for in a snack, said Denise Lefebvre, senior vice president of R & D for PepsiCo Foods. “People love the crunch,” she said. “Anything that amplifies the senses is big now.”

Japanese food is the cuisine all the other cuisines most want to hang out with. “Chefs throughout the world, many of Japanese descent, are fusing Japanese ingredients or culinary techniques with foods they love from their surroundings,” according to AF & Co and Carbonate, two San Francisco firms that collaborate on an annual hospitality trend report.

In New York, the restaurant Kimika is a popular practitioner of itameshi, the combining of Italian and Japanese cooking. Nikkei, the mashup of Peruvian and Japanese cuisines, is on display at places like Causita in Los Angeles, where Peruvian potatoes stand in for sushi rice. At Ethel’s Fancy in Palo Alto, California, a fourth-generation Japanese American chef is defining California-Japanese cooking. Even Nordic chef René Redzepi is getting in on it: His next big-ticket Noma pop-up will be in Kyoto.

The Thrill of Thrift

Inflation, fears about climate change and growing concern about waste and conspicuous consumption are driving a new interest in frugality. “People are no longer embarrassed and hiding their coupons,” Lancaster said. Social media is filled with money-saving tips for the kitchen, and menu hacks to get cheaper items at Starbucks and other restaurants. Energy costs, both monetary and environmental, are expected to persuade home cooks to increase the use of small appliances like microwaves, air fryers and electric kettles rather than turn on the oven. Private-label supermarket brands and restaurants that offer shorter menus and more value are gaining speed. “Expect a stronger focus on durability, flexibility and timelessness as consumers seek to buy less and own products that last longer and serve multiple purposes,” Simon Moriarty, director of Mintel Trends, writes in his report on the coming year.

Tuber of the Year

Ube, a slightly nutty-tasting, vanilla-scented purple yam from the Philippines, is showing up on lots of trend lists and in all kinds of foods and drinks, from pies and waffles to lattes and ube coladas. It easily made the list of colours and flavours that capture the mood of 2023 compiled by food-processing giant ADM. The yam’s popularity is riding on an interest in food with bright, natural colours like dragon fruit, lychee and purple Peruvian corn. Also rising: floral flavours like vetiver and ylang-ylang.

One Giant Step for brandkind

In the same way that the Apollo era popularised Tang and freeze-dried ice cream, a renewed interest in space travel will influence how we eat and drink in 2023. Anything having to do with space will be big as people look for the optimism and inspiration that seem in limited supply on Earth. Already, there are climate-friendly Moonshot crackers (the wheat was farmed using regenerative methods) and Starlight, a limited-release Coca-Cola drink that calls itself “space flavoured.” (What exactly space tastes like has spawned deep debate online.) “Top Chef” contestants cooked for astronauts this year. Experiments in growing food in space will fuel interest in vertical gardening and vegetables that can grow in stressed environments on Earth.

“The undiscovered novelty of outer space will have a particularly unsullied charm for Gen Z, who are disillusioned with the world as it is,” said Zegler of Mintel. “But brands should also consider the inspirational role space will have in Gen Alpha’s lives.”

After nearly three years of restricted social interaction and ordering in, people will seek out restaurants that offer interaction, excitement and a bit of a show. Look for more dining-room trolleys, elaborate ice sculptures, flaming desserts like baked Alaska, and cocktails finished tableside with a puff of smoke or a change of colour. Food and music will mix in new ways, like updated versions of the old-school piano bar. “There’s a quest for interaction,” said Andrew Freeman, a hospitality public-relations veteran in San Francisco. “People are willing to spend, but they are going to be looking for the value proposition of the experience. Engagement is the catchword.”

Nigerian food, with its rich and varied layers, will be a breakout star in the United States as chefs and diners who are unfamiliar with West African cooking start to understand it from a regional perspective, in the way a general interest in Italian cooking eventually led to an appreciation for the cuisine of Tuscany or Sicily.

In Brooklyn, Nigerian chef Ayo Balogun’s Dept of Culture offers an experience that is as much a dinner party as a restaurant. Kwame Onwuachi is playing around with a version of egusi stew at Tatiana, which just opened at Lincoln Centre. Fonio, a drought-resistant African grain that suggests a marriage between couscous and quinoa, is being championed by chefs like Pierre Thiam and Alon Shaya. Even Mexican food is getting a Nigerian twist. At Naija Boy Tacos in Sacramento, California, Nigerian American chef Rasheed Amedu is serving curry goat on plantain cassava tortillas and seasoning chicken with the street-kebab spice called suya.

Vibe of the Year

Communal eating understandably fell out of favour during the pandemic, and many people aren’t ready to return to buffets or reach into the same chip bag. But forecasters see a change coming. “If you look at what our lives were like for a couple of years, we didn’t share because sharing was considered dangerous,” said. Lefebvre of PepsiCo Foods. “Now the sense of community has never been stronger.”

That’s in part why her company in November introduced Minis, tiny versions of snacks like Cheetos and Sun Chips in canisters that make it easier to pour some into a friend’s hand. It’s also behind the growing popularity of appetizer and dessert towers, and large-format cocktails like the $100 Disco Mule served in a big disco ball at the Tipsy Alchemist in Austin, Texas. And there might be no better indication than the rising popularity of food for a crowd than the continued growth of food served on a communal board that started with the charcuterie craze.

The vibe goes beyond products. Restaurants, coming out of the pandemic into a new era of staff respect and community love, are sharing more information about the people behind the food, whether listing the names of the whole crew on the menu the way some restaurant name farms or, in the case of Hi Felicia, a new kind of homegrown, high-end restaurant in Oakland, California, encouraging diners get to know the entire staff by name.

Call these trendlets: In the beverage category, yaupon tea from the American holly tree, is on a lot of lists for 2023, along with coffee drinks made with fruit purée and milk, or roasted in a style called white coffee. Avocados will be leaving toast and arriving in cocktails and desserts, and avocado oil will be a favourite cooking medium. In boozy trends, watch for the Mexican spirit called sotol and a retro interest in Galliano liqueur. Casual restaurants will experiment with monthly subscriptions, and fancy ones with aged fish. Fermentation continues its march to the top of a lot of lists, with no-ingredient ingredients like no-bee honey and no-cacao chocolate.