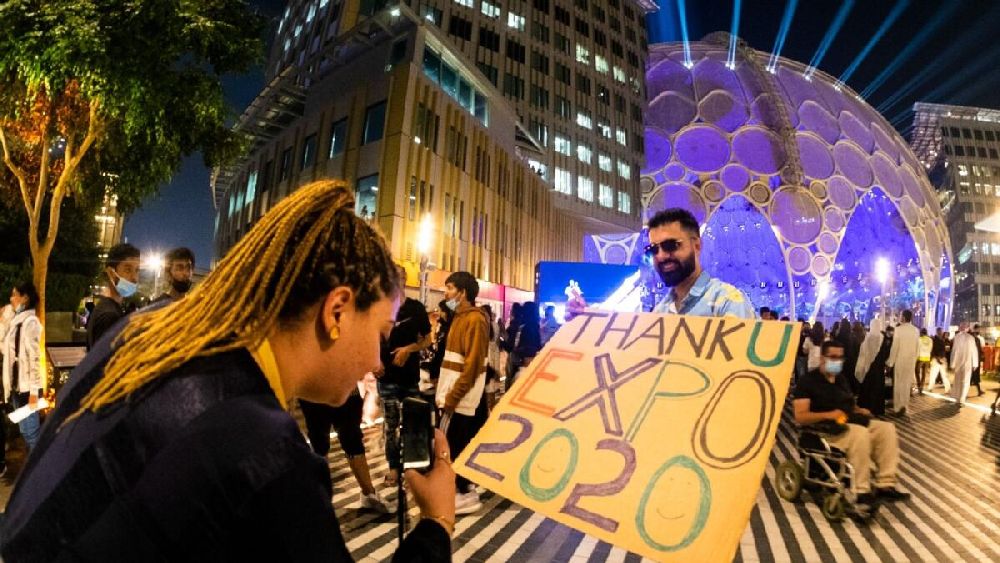 It was a razzmatazz of a night that marked the end of Expo 2020 on Thursday evening.

With a spellbinding closing ceremony marked by dazzling fireworks and global musical icons under the stunning Al Wasl Dome, curtains came down on the ‘greatest show on earth’ that attracted 23 million visits.

The hour-long ceremony that saw performances by the likes of Christina Aguilera, Norah Jones and cellist Yo-Yo Ma was watched by hundreds of thousands that thronged the Expo site on the closing night.

The night also saw the handover of the Expo flag to Japan that will host the next world fair at Osaka in 2025, and captured the joys and achievements of a six-month journey that began at Al Wasl on October 1.

“Endings are new beginnings,” said Sheikh Nahyan Mubarak Al Nahyan, the UAE Minister of Tolerance and Coexistence and Commissioner-General of Expo 2020 Dubai, in his keynote speech.

“From the very first moment, we promised that Expo 2020 Dubai will be one for the history books,” he said encapsulating the pageantry of pavilions, mega entertainment events, shows and conferences that the world fair hosted between October 1, 2021 and March 31, 2022.

From day one, as Dubai hosted the first world expo of the Arab world, Sheikh Nahyan said the country had moved tirelessly to the goal of ‘Connecting Minds and Creating the Future’ – the overarching theme of Expo 2020.

If Dubai welcomed world leaders, dignitaries and visitors from across the world during the last six months of Expo, Sheikh Nahyan said the country will continue to do so even after the world fair ends. “I reiterate that our doors will remain open to everyone. The UAE has, and will always remain, a country for all humans, so you are welcome here always.”

The night began with the rendition of the national anthem by children and the UAE flag unfurled on the trellis of Al Wasl Dome, which shimmered as fireworks erupted in the night sky. The star of the night was the 360-degree projection dome that stood awash in a kaleidoscopic of colours, transformed into a silver stream of cascading waterfalls, lending the night a magical touch.

The closing ceremony also saw a remix of the Expo theme song ‘This is Our Time’ as dancers moved in circles holding flags of participating countries. The sprawling 438-hectare site transformed into a magic planet.

The young Emirati girl — played by Dubai school girl Mira Singh — who featured in the opening ceremony, appeared on stage in the same flowing pink costume.

The ancient golden ring founded by His Highness Sheikh Mohammed bin Rashid Al Maktoum, Vice-President and Prime Minister of the UAE and Ruler of Dubai, and which is emblematic of the Expo, shimmered above the dome, and descended into a golden circle as she performed in sync with an ensemble of dancers.

‘A million dreams are keeping me awake’ delivered by Aguilera resonated with the crowd that cheered and roared.

A special message from Sheikh Mohammed was played during the end of the ceremony. He said: “Dubai portrayed to the world a different version of ingenuity that touched the hearts and minds of every member of society.

“Our sons and daughters have proven their ability to overcome unprecedented difficulties and challenges. And in every moment of this journey, we reflected the values of the UAE – values of affection and hospitality.”

Hundreds and thousands watched the show that was live-streamed across 20 giant screens placed across the sprawling site, including Jubilee Stage, Festival Garden and the sports hubs.

But the night did not end with the formal closing ceremony. The festivities continued with musical performances at the Jubilee Stage and Dubai Millenium Amphitheatre.

Amidst all the celebrations, emotions also ran high as residents bade goodbye to the mega event that enthralled them with hundreds of events, shows and performances.

“I am breaking down in tears. I do not want this to end,” said Marissa Lisie, a Filipino expat.