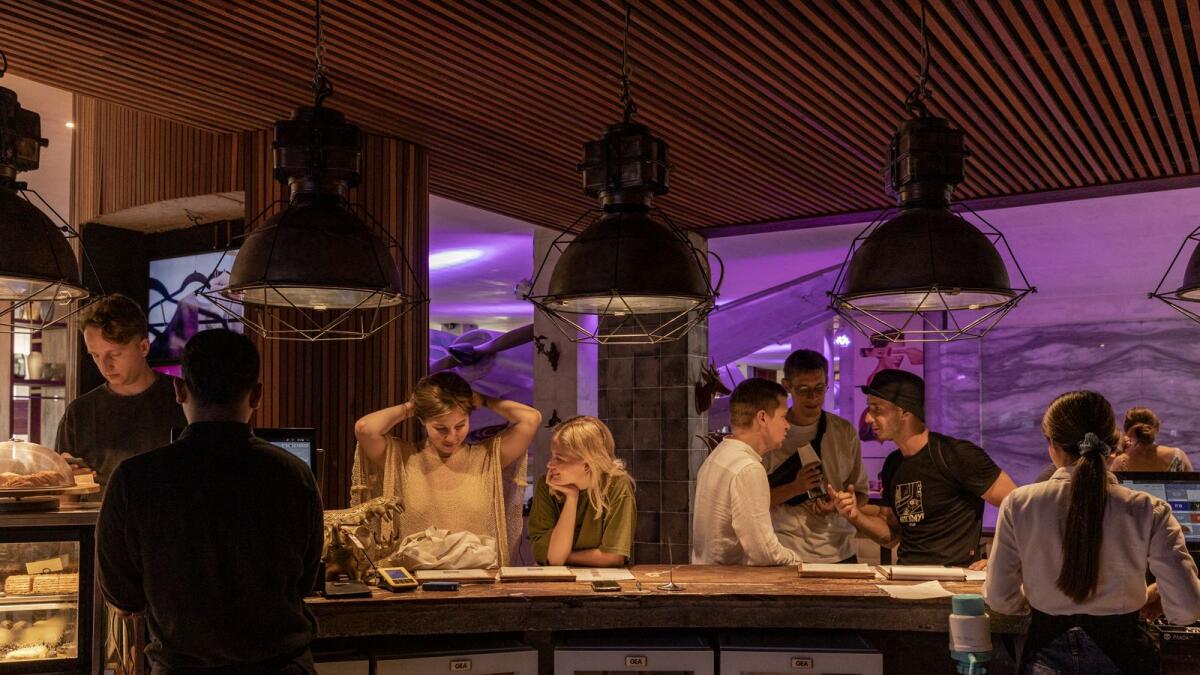 At a cafe more than 6,000 miles from the front lines, the Kyiv-style cake sits near the kartoshkas, a Russian dessert made of cookies, condensed milk and butter.

The chef is Russian, but the borscht on the menu, first described as a “Russian soup,” is now identified as being of Ukrainian origin. Nearby, visitors can also avail themselves of a banya — a sauna room that is the mainstay of both Russian and Ukrainian life.

Since the war in Ukraine began, Parq Ubud — part co-working space, part apartment complex, part cafe — has become a haven for both Russians and Ukrainians on the Indonesian island of Bali.

Between the two sides, friendships have been formed. But the burdens of a war being waged so far away still weigh on many. “I thought it would be uncomfortable, because you feel shame for what’s going on,” said Polina Ptushkina, a 21-year-old designer for a cryptocurrency startup who arrived in Bali in March. “For sure you feel shame, because you didn’t stop it, because you didn’t do enough,” said Ptushkina, a Russian who said she protested in the streets of Moscow on the first day of the invasion. “It’s still weird, I think, for everybody, for Ukrainians and for Russians.”

She recounted an awkward conversation with a Ukrainian woman who worked in the office next to hers in Parq. The woman had popped over, asking Ptushkina and her colleagues whether they were Ukrainians. “I’m sorry, we’re from Moscow,” Ptushkina replied. The woman asked Ptushkina what she was sorry for. They are now friends.

Several Russian men in their 30s said they were there to escape the draft. All of them were against the war but were also cautious in discussing Russian President Vladimir Putin.

For some Ukrainians at the complex, just seeing Russians around was a painful reminder of what was happening back home. “We don’t know how to communicate with Russians,” said Paulo Tarasyuk, CEO of an online travel company. “It is so hard for us.” Tarasyuk added that he did not see the need to engage with Russians about the war because “they have their information and we have our own.”

In the spring, he helped 10 Ukrainians move to Bali and says he is still getting requests for help from people in Ukraine.

One of Tarasyuk’s recent hires was Ihor Popov, a 24-year-old from Odesa, who works as his assistant and greets Ukrainian arrivals at Bali’s main airport. “They have eyes like this,” Popov said, stretching out his hands next to his eyes. “Because it’s a huge cultural difference between Ukraine and Indonesia. It’s a completely new universe for most people, especially if you’ve never travelled.”

Even before the war, Bali was a go-to destination for many Russians and Ukrainians. The island has promoted itself as a work location for so-called digital nomads, promising long-term visas to a highly educated, tech-savvy crowd.

As of September, more than 14,500 Russians and more than 3,000 Ukrainians have entered Bali, according to Indonesian immigration data. Sandiaga Uno, Indonesia’s tourism minister, said his government would help renew the tourist visas of those caught up by the war. “We know it’s a tough time,” Uno said.

William Wiebe, the American co-founder of Parq, said he and his other investors never intended to cater entirely to Russians and Ukrainians, thinking it would be used more by Chinese and Australian tourists.

Wiebe says there were two surges of arrivals: right after the war started, and then after Russia’s draft mobilization. They had to scramble to get more apartments ready, and now, they have a waiting list of about 300 people. “Within days of the war, we were inundated,” Wiebe said.

Kristina Kuchinskaia, Parq’s real estate sales manager, says about 90% of the people at Parq are Russians and Ukrainians, though she added that she did not know for sure “who are Ukrainians and Russians.” “I didn’t separate. To me, we are all one,” Kunchinskaia said.

But for others in Parq, the notion of identity — once blurred in two countries with similar customs, cuisines and languages — has been sharpened by the war.

Alex Man, 29, an investor from Kharkiv in Ukraine, fled to Bali with his three children, 7, 5 and 2, in tow. He says his school-aged children recently got into an argument with their Russian classmates over which side was right. Mr. Man used to speak Russian all the time with his extended family but switched to Ukrainian after the war. This summer, he sent his children to a Ukrainian-speaking summer camp in Bali.

Man says he is donating money and raising funds for volunteer organizations in Ukraine. “My heart is bleeding because I cannot go and fight myself,” he said. “A lot of our energy and our thoughts are connected with Ukraine.”

Bali has long attracted people seeking an escape from the realities of life. In a place where a floating sensory deprivation tank promises, in Russian, to give you a “significant alteration of consciousness,” and where women sip vitamin detox juices near a pool, thoughts of the war back home can sometimes slip away. “It’s very important to understand, all these problems that are happening in Ukraine are abstract for us,” said Boris Pryadkin, 35, Parq’s sales manager, whose parents are in the Ukrainian city of Luhansk.

But the war can never be completely forgotten, even here.

“In daily life, I don’t really touch the topic,” said Nataliia Priadkina, 35, a psychotherapist married to Pryadkin. But every time she speaks with her family back in Ukraine — always urging them to also leave — the realities of the war reach her again. “When I talk to them, I understand that feeling, the situation that they are inside,” she said, her eyes filling with tears. “It’s emotionally challenging.”

Many Russians and Ukrainians say Bali is probably a stopover for them before they decide where to go next. On average, the Russians are now staying for more than 90 days, compared to one to two weeks previously, according to Uno, the tourism minister.

Ptushkina, the designer from Moscow, says she hopes to eventually end up back in Europe to study art. She says most of her friends are now in places such as Lithuania, Latvia, Israel, Georgia and France.

It was a friend of Ptushkina’s, Arkhip Vouba, who encouraged her to come to Bali with him to work at the startup.

As he was leaving Moscow, Vouba, 21, said he had a fleeting thought that it could be his last time there. He has now decided that he would not return. On life in Parq, he said: “It doesn’t feel the same, but it also feels something like home.”