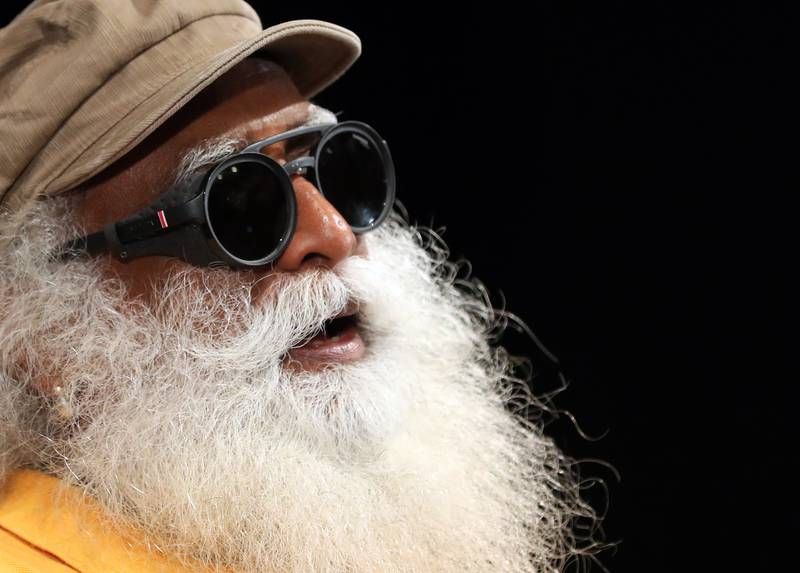 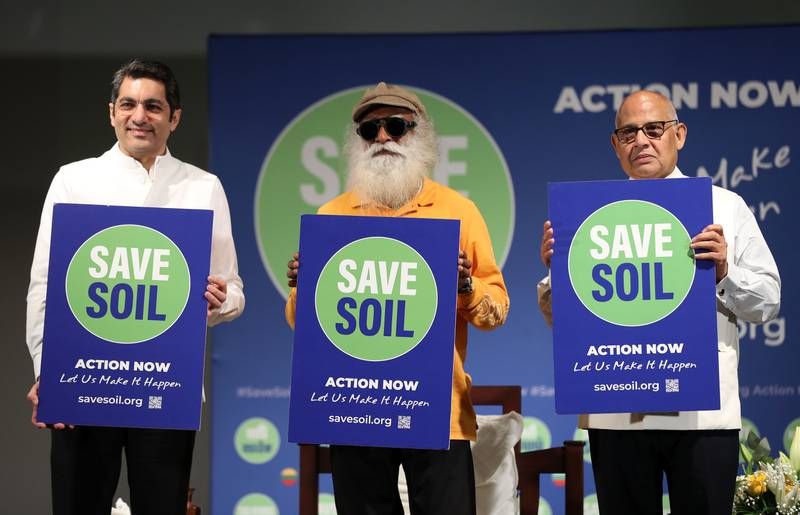 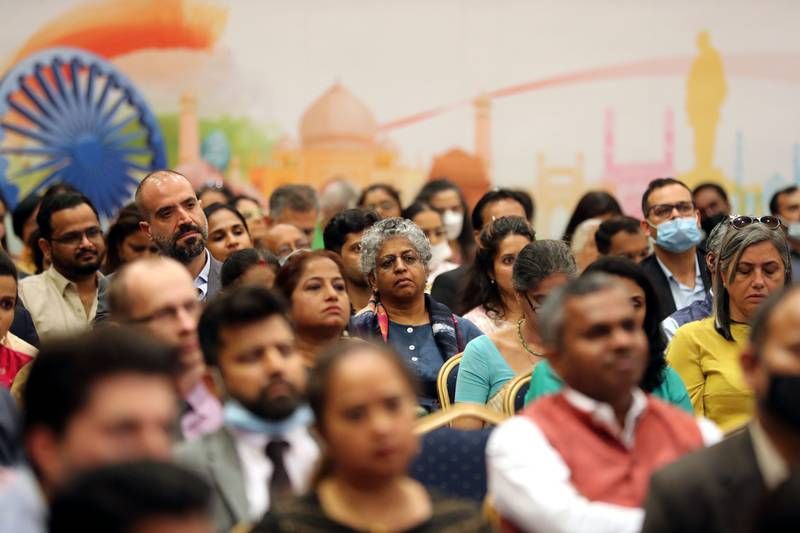 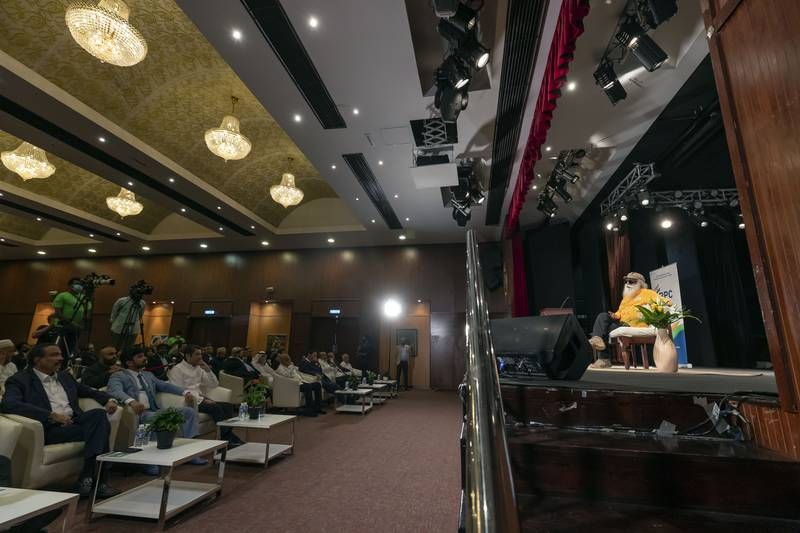 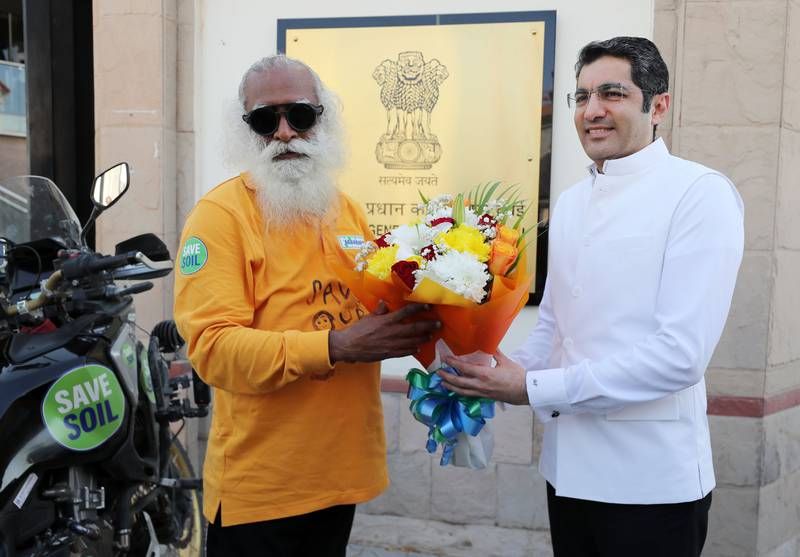 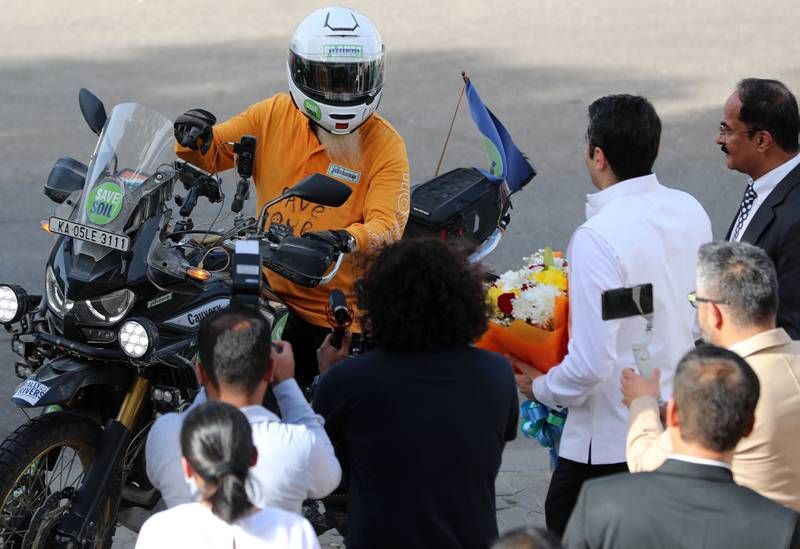 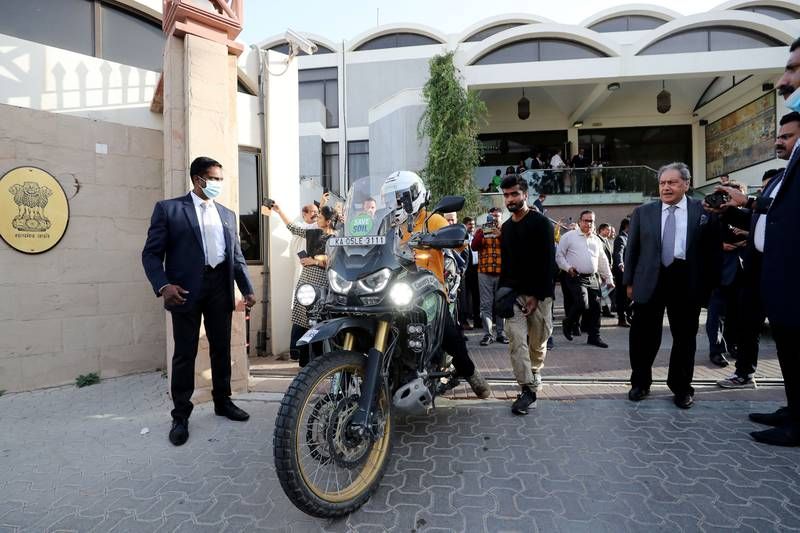 Indian spiritual leader Sadhguru is on a 100-day journey from the UK to India to raise awareness about the urgent need to save the soil. All photos Chris Whiteoak / The National

An Indian yogi on a motorbike rode into the UAE this week with a powerful message to ask people to join him in protecting the planet’s soil for future generations.

Jaggi Vasudev, or Sadhguru as he popularly known, is on a 100-day journey from Britain to India.

He spoke at the Indian Consulate in Dubai on Thursday evening, and will visit 27 countries meeting world leaders and the public with the aim of persuading governments to include soil regeneration in their national policies.

The 65-year-old reached the UAE a few days ago and has planted mangroves with Mariam Al Mheiri, Minister of Climate Change and Environment, in Abu Dhabi.

An agreement was signed between the UAE’s International Centre for Biosaline Agriculture and Sadhguru’s Conscious Planet to exchange knowledge to safeguard agricultural soil in the country and raise awareness about conservation.

“The desert accounts for more than 80 percent of our country’s territory, which makes us all the more cautious to preserve our soil and the vital ecosystem services it provides,” Ms Al Mheiri told Wam news agency.

“The collaboration with Conscious Planet is a new step in our ongoing efforts to safeguard our precious soil for the next generations.”

Sadhguru said the Emirates, which will host the Cop28 climate summit next year, could occupy a leadership position by demonstrating how to fertilise deserts.

“The UAE government has been most progressive. While the rest of the world is busy turning fertile land to desert, it’s wonderful to see here how deserts are being converted to fertile land,” he said at the Indian consulate in the first of two public meetings in the city.

“In many ways, the UAE can take the leadership. It’s a hub of business, airlines. It can be an ecological hub also.” 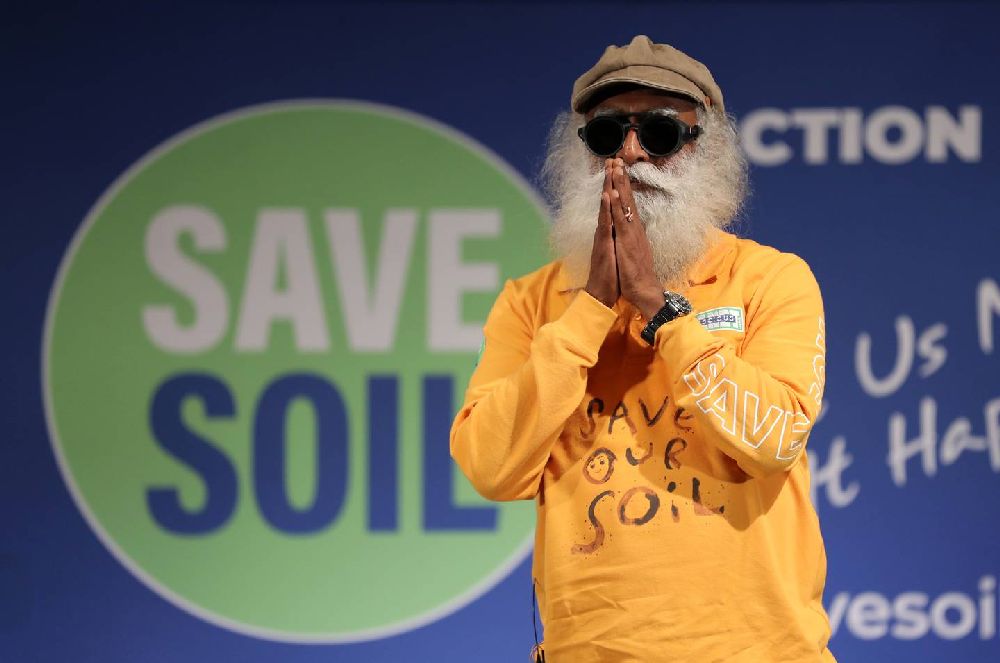 Indian guru Sadhguru explains why soil regeneration should be on the policy agenda of every government across the world.

People have queued in the Middle East and Europe to hear the yoga guru with a flowing white beard speak during his Save Soil campaign.

The motorbike enthusiast has ridden through sandstorms and heavy rain to galvanise people since the start of his mission on March 21 in London.

His movement is a global campaign to save the world’s soil by helping countries to formulate policy to address soil health.

During his talks, Sadhguru explains that because of industrialised farming and the reduction of tree cover, the organic content in soil is no longer being replenished.

The UN Food and Agriculture Organisation has said soil erosion is one of the world’s biggest threats.

It has sounded a warning that agricultural systems are at breaking point, which could lead to a dangerous decline in food production in the next 30 years.

He warned of famines, food and water shortages.

“This year, at least six nations will go into serious famine conditions. Last year the World Food Programme spent $9 billion distributing food. This year it is asking for $15 billion.

“Food has to grow where people are and for this soil has to have some strength.”

His recommendation is for governments to adopt policies that will mandate a minimum of 3 per cent organic content in agricultural soil in their country.

Healthy soil with at least 3 to 6 per cent organic content can provide more nutritious food, ensure water retention and reduce erosion, he said

Sadhguru’s main message was to enrich soil with leaves, vegetation and animal waste.

He called for soil regeneration to be on the policy agenda of every government and for incentives for farmers who hit a 3 per cent target of organic content.

“Everybody must be part of the solution. People must speak up because then governments will listen,” he said.

“I am beseeching governments to separate soil from other issues. Do not link it to fertiliser usage, pesticides.”

Northern Europe has the highest organic soil average of 1.48 per cent with the figure at about 1.25 per cent for the US.

Sadhguru’s Isha Foundation has been working with more than 130,000 farmers in southern India to boost organic content, with strong results.

“This is not me giving a doomsday message. Every responsible scientist is clearly pointing in this direction. But if we have the necessary commitment in the next 10 to 15 years, we can make a significant turnaround. We have to do this now.”

From Dubai, Sadhguru will head to Muscat and then to Jaipur in India, from where he will travel through the country to end the journey in the southern city Mysore on June 20.