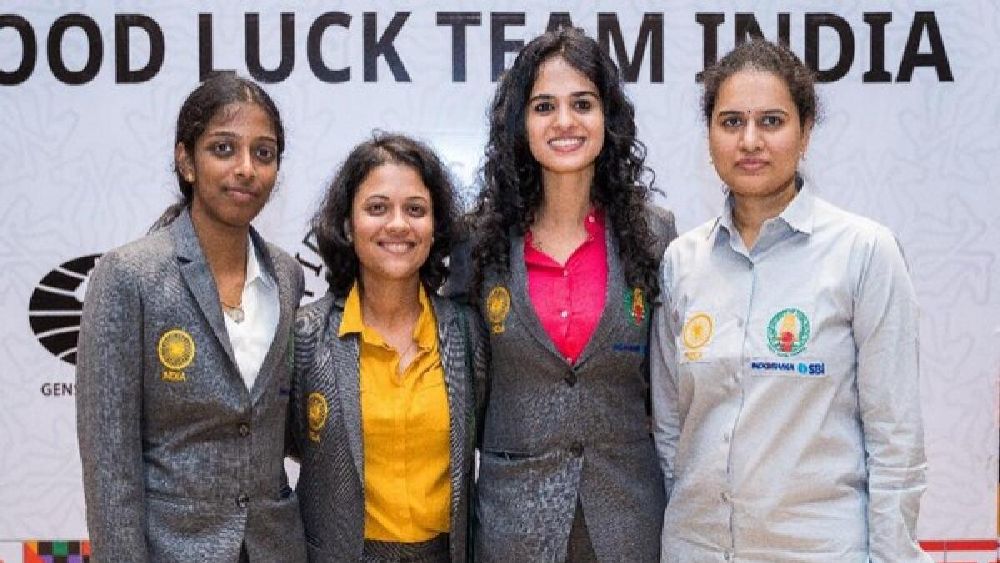 The Indian women’s team scripted history at the 44th Chess Olympiad by winning the country’s first-ever medal in the women’s section, while the men’s team claimed their second bronze medal in the prestigious event in Mamallapuram, Tamil Nadu on Tuesday.

The India A team, comprising Koneru Humpy, R Vaishali, Tania Sachdev and Bhakti Kulkarni, secured a bronze medal in the women’s section after a 1-3 loss to the USA in the final round match.

Humpy and Vaishali drew their games, while Tania Sachdev and Bhakti Kulkarni lost their games.

Abhijit Kunte, the India A coach, was all praise for the team saying: “The team has worked really hard in the last three or four months, and this is India’s first-ever medal in the history of the Olympiad, this should be the beginning of much better days for women’s chess in India.”

The first women’s Olympiad was held in 1957. Since 1976, women and open sections have been held together.

In the open section, on the other hand, the young India B team, which impressed everyone with their brilliant performances throughout the event, handed the country its second bronze medal after thrashing Germany 3-1.

India B had D Gukesh leading from the top and the start, scoring a fantastic 9/11, Nihal Sarin chipped in with a superb 7.5/10, Praggnanandhaa scored well with 6.5/9 and Raunak Sadhwani also scored a valuable 5.5/8.

“Overall, it has been a very enjoyable event. I did not expect us to perform so well, but it could have been better. We could have had a great chance at a gold medal if I had won or drawn my game yesterday (on Monday). But these things happen. Immediately after the game, I was devastated and our mentor [Viswanathan] Anand put me in a better frame of mind by saying that these things happen in sport and he too was at the receiving end himself,” said Gukesh, who played all 11 games and tallied 9 points.

It was India’s second bronze medal in the open section at the Olympiad after winning it before in 2014. Besides medals in the team events, it rained medals for India on individual performances, with as many as seven Indians winning two gold, one silver and four bronze medals. Gukesh and Sarin were on the top and second board respectively, while Arjun Erigaisi secured a silver medal on the third board. R Praggnanandhaa (third board), R Vaishali (third board), Tania Sachdev (third board) and Divya Deshmukh (reserve board) claimed individual bronze medals.

India also won the prestigious Gaprindashvili Cup. It is given to the nation for their collective performance in both open and women’s sections. It was also the first time India hosted the world’s biggest chess tournament.

Uzbekistan and Ukraine emerged as the champions in the open and women’s section respectively at the 44th Chess Olympiad.

The young Uzbekistan side, seeded 14th tied for top place with 12th seeded Armenia but won the gold medal on better tie-break while Armenia had to settle for silver after both teams scored 19 points each. India B finished with a tally of 18 points.The event produced most unexpected results where fancied Teams ranked in Top-10 failed to get any medal. India A team also performed well but was rather unlucky to finish fourth, missing the medal by a whisker.

India A held USA to a nail-biting 2-2 draw. Erigaisi brought in the victory while Harikrishna and Vidit Gujrathi were held to draws. SL Narayanan lost his game.

In the women’s section, Ukraine clinched a gold medal and Georgia silver after a tie-break was applied as both scored 18 points each. India A, USA and Kazakhstan tied for third place but were pipped by India A for the bronze.

India B, seeded 11th, also performed creditably to be placed 8th with 16 points while India C finished 17th with 15 points.

The Uzbekistan team expressed happiness with their country getting a gold medal as at the FIDE Congress the hosting of the 2026 Olympiad was awarded to Uzbekistan.