The government expects to raise up to $2.7bn – a third of its original target – from selling a 3.5% stake in the country’s top insurer 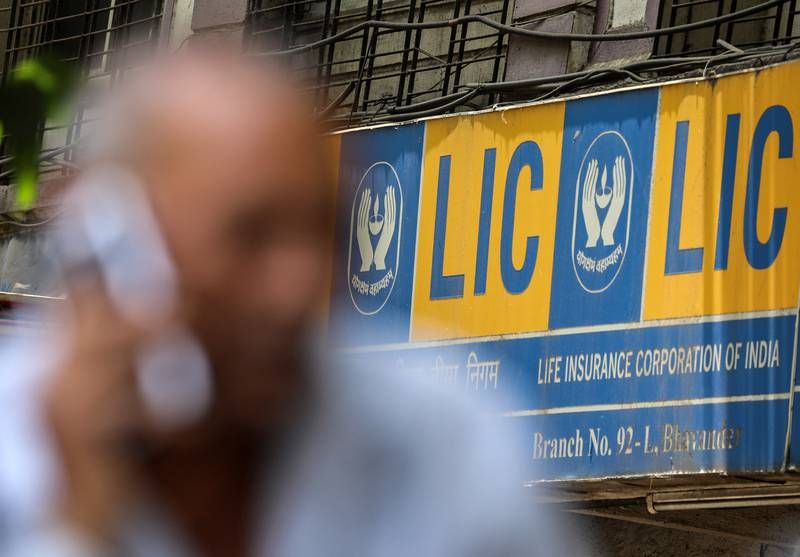 A man talks on the phone near a Life Insurance Corporation (LIC) branch office in the outskirts of Mumbai. India’s largest-ever initial public offering of LIC, which is expected to have raised $2.74bn, is part of plans by Prime Minister Narendra Modi to privatise some industries and fill state coffers. EPA

Foreign institutional investors stepped up their bids for India’s biggest share sale in the last hours before the close of subscription on Monday, shunning currency risks and global market uncertainties.

Overseas investors put in orders for 61 per cent of the shares set aside for institutional buyers in the $2.7 billion initial public offering of Life Insurance Corporation of India, according to data from the exchanges. The portion was oversubscribed nearly three times by the end of the bidding. The issue opened on May 4 and received bids through the weekend.

While the anchor portion of the IPO also drew in sovereign funds from Norway and Singapore, most of the shares still went to domestic mutual funds.

“This shows that the capacity of our domestic investors and markets has gone up considerably,” Tuhin Kanta Pandey, secretary at the divestment department in the finance ministry, said at a briefing in New Delhi. “We can run our capital markets without being dependent on foreigners, though they are also welcome.”

Dubbed India’s “Aramco moment” in reference to Gulf oil giant Saudi Arabian Oil Company’s $29.4bn listing in 2019 — the world’s largest — the float of LIC has ended up resembling the Aramco IPO not just in scale but in its reliance on domestic investors after some foreign buyers deemed it too expensive.

LIC has been seeking to drum up interest with newspaper advertisements since the start of the year, seeking to take advantage of a retail investment boom in India.

India’s government had cut the fundraising of the IPO by about 60 per cent as the war in Ukraine roiled markets, denting risk appetite, while rising US interest rates are putting foreign investors off emerging market stocks. It also cut the valuation it is seeking for the country’s oldest insurer, which would be worth 6 trillion rupees ($77bn) at the top of the price range.

“LIC is not only the largest insurance company but also the largest local investor in India. In a way its a proxy for the country’s growth,” said Jigar Shah, a Mumbai-based strategist with Kim Eng Securities. “The IPO was priced very wisely, making it attractive for investors, otherwise it would be difficult to get such response given market turbulence globally.”

While foreign investors picked up pace only on the last day, retail buyers have been piling in since the issue opened for subscription. Policyholders placed bids for over six times the shares reserved for them, while the employee portion received orders for four times the amount available, stock exchange data showed. Retail investors and policyholders will receive discounts on the offer price.

Still, the international investor interest pales in comparison to some of last year’s Indian IPOs. One97 Communications Ltd., which operates digital payments firm Paytm, drew in the likes of BlackRock, Canada Pension Plan Investment Board and Teacher Retirement System of Texas, among many others, for its 183 billion-rupee share sale last year. Food delivery platform Zomato Ltd. was similarly popular among foreign investors.

However, those buyers have been left nursing losses as enthusiasm over India’s tech boom waned after some flops. Paytm sank 27 per cent on its debut and is now trading 74% below its offer price. Zomato had a strong debut last summer but has since lost 20 per cent in value.

Investors have also had concerns about LIC’s ability to keep market share as private insurers like HDFC Life Insurance and SBI Life Insurance expand. The private sector has been on an aggressive expansion spree during the pandemic, growing new individual policy premiums while LIC struggles.