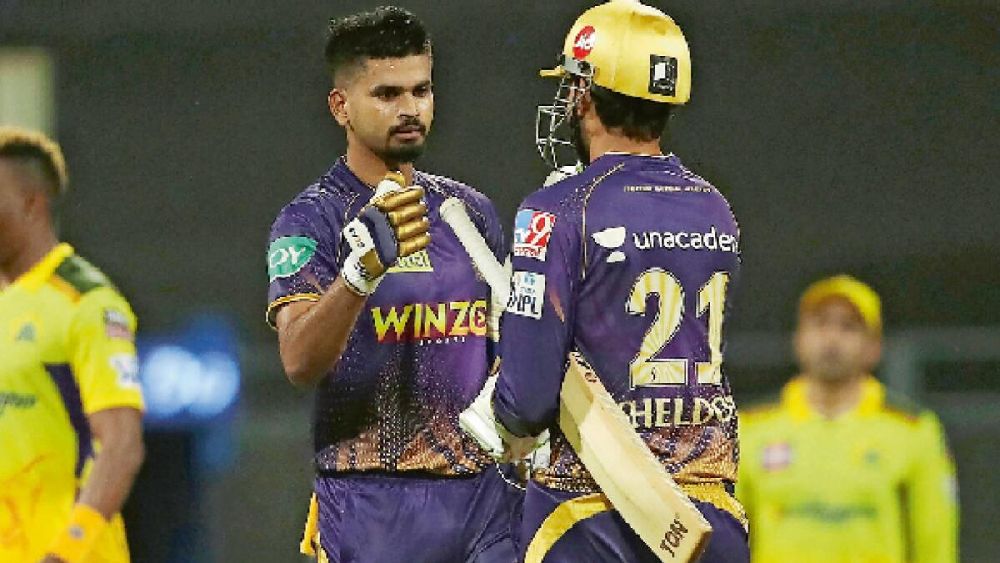 Shreyas Iyer did not put a foot wrong in his first game as captain of Kolkata Knight Riders (KKR), beginning with winning the toss at the Wankhede in Mumbai, where the dew makes chasing a target a big advantage. But that wasn’t all that gave KKR a convincing win over Chennai Super Kings (CSK) in a replay of last year’s final in the opener of this season of the Indian Premier League (IPL).

Umesh Yadav hasn’t had much success in the IPL, despite his pace and ability to swing the ball, because he hasn’t developed the variations bowlers need in this format when batsmen are coming hard at them.

But a fresh pitch at the Wankhede in the early evening was ideal for him, and Iyer did well to give him three straight overs with the new ball, in which he dismissed both CSK openers Ruturaj Gaikwad and Devon Conway. CSK never recovered from that as KKR’s mystery spin duo of Varun Chakravarthy and Sunil Narine took charge in the middle overs.

The runout of Ambati Rayudu in response to an unusually indecisive Ravindra Jadeja at the other end didn’t help. It was only a vintage unbeaten 50 by MS Dhoni — rolling back the years in spite of not playing international cricket round the year — that took CSK to a face-saving 131, but that was never going to be enough.

Understandably, Shreyas Iyer appeared much more confident than Jadeja as a skipper, right from their body language at the toss. Iyer has captained Delhi Capitals to an IPL final earlier, whereas Jadeja, in his first appearance as captain in a franchise that’s all about MSD, was diffident. He needs to bring his Pushpa avatar to the ground going forward. (Jadeja does a great mimic of Pushpa, the hero of a superhit Telugu action thriller.)

Iyer got full value from his Indian replacements for KKR’s two unavailable players from Australia, Pat Cummins and Aaron Finch, who are yet to arrive from Pakistan. While Yadav opened the bowling, Ajinkya Rahane scored a classy 44 in 34 balls as an opener, helped no doubt by relatively low scoreboard pressure at the outset.

CSK, on the other hand, went for like-for-like replacements for swing bowler Deepak Chahar, recovering from a quadriceps tear, and all-rounder Moeen Ali from England, who ran into a visa delay. Tushar Deshpande, taking the new ball in Chahar’s place, failed to exploit a tacky wicket like Yadav did earlier. And though Kiwi spinner Mitchell Santner got Rahane’s wicket, he could not build pressure in the middle overs like KKR’s spinners. CSK might have had a better chance with England’s Chris Jordan sharing the new ball with Adam Milne, and Mumbai leg-spinner Prashant Solanki replacing Moeen Ali.

It’s just the first game, and the toss did give KKR a decisive advantage, but CSK are missing Faf du Plessis at the top of the order as well as Josh Hazlewood, who was so successful with the new ball last season. It was surprising they didn’t extend the bidding further to try and retain them, as Royal Challengers Bangalore (RCB) acquired both for prices of Rs70 million and Rs77.5 million.

But don’t write off CSK. New Zealand opener Devon Conway has the potential to fill the big shoes of du Plessis. The return of Chahar will make a big difference to their wicket-taking ability with the new ball. And Dwayne Bravo’s 3 for 20 with the ball, after Dhoni’s 50, means the old stalwarts still have fuel left in the tank.

It’s hard for Jadeja to take a firm grip of the reins handed to him by his mentor, because everyone still looks at Dhoni for ideas and inspiration.

This was evident during a drinks break when coach Stephen Fleming was out in the field chatting exclusively with Dhoni about field placements. Shreyas Iyer had no such constraints in his decision-making and made a perfect start to the season.

Sumit Chakraberty is a writer based in Bengaluru. Write to him at [email protected]