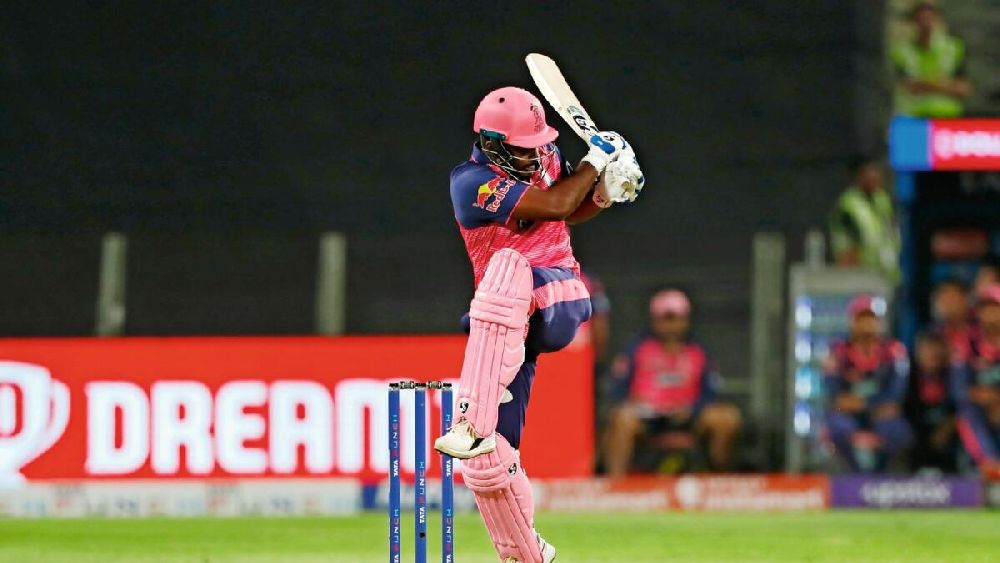 Sanju Samson led from the front with a blistering 55 as Rajasthan Royals opened their season campaign in the IPL with an emphatic 61-run win over Sunrisers Hyderabad on Tuesday.

The captain, playing his 100th match for Royals, who won the inaugural Indian Premier League edition under late Australian star Shane Warne in 2008, guided his team to 210 for six in Pune.

Royals’ bowlers led by Prasidh Krishna, who rattled the top-order including dismissing skipper Kane Williamson for two, restricted Hyderabad to 149-7 despite an unbeaten 57 by Aiden Markram.

Samson, a wicketkeeper-batter, remained the hero after he smashed three fours and five sixes in his 27-ball blitz and put on a key stand of 73 with Devdutt Padikkal, who made 41.

West Indies left-hand batter Shimron Hetmyer hit 32 off 13 balls and recorded two sixes to take the Royals’ total past 200 after being out into bat first.

Hyderabad’s Umran Malik clocked speeds of over 148 kmph (92 mph) and claimed two wickets including English opener Jos Buttler, who survived a few reprieves including being caught behind on a no-ball in the opening over, for 35.

Put into bat, Royals opener Jos Buttler, on zero, survived courtesy a no ball. Buttler (35) and Yashasvi Jaiswal (20) then gave the side a flying start, stitching a 58-run stand to lay the foundation for a big total.

Buttler was brutal on Umran Malik, hammering him for two fours and two maximums in the fourth over, as RR collected 21 runs.

The two openers then struck a six each off Washington Sundar (0/47) in the next over as RR raced to 52 for no loss after five overs.

Jaiswal however perished in the seventh over, holing out to Aiden Markram off Romario Shepherd. While Buttler, who hit three fours and as many sixes, was dismissed at the start of the ninth over as RR slipped to 75 for two.

Showing intent straightaway, Samson started with a four and a six over long-off and hit another maximum over fine-leg, as he took on the SRH attack with gusto.

While Samson found the fence at will, Padikkal too got into the groove and began attacking in the 12th over when he pulled T Natarajan for a maximum.

Samson was again brutal on Sundar, striking him for two successive sixes in the 16th over as RR marched on.

SRH removed Paddikkal and Samson in quick succession, but a lot of damage had been done by then, before Hetmyer compounded the bowling team’s woes with his massive hits as RR scored 123 runs in the back 10

“It was a very different wicket than what we thought,” Samson said at the post-match presentation.

Talking about the franchise, he said: “I think every season we come with great dreams, its a franchise that takes good care of us. Our owners trust us, give us space. We are taking it one game at a time.”

Meanwhile, Sunrisers captain Kane Williamson said: “I think we started beautifully with the ball. We’ve seen in all games there’s swing and assistance with the new ball — you have to try and make some inroads. It was a good surface and they are a difficult team to stop.

“For us, we need to look at it logically and there are a number of things to improve on. That said, T20 throws some curveballs at you, got to get your chin up.”