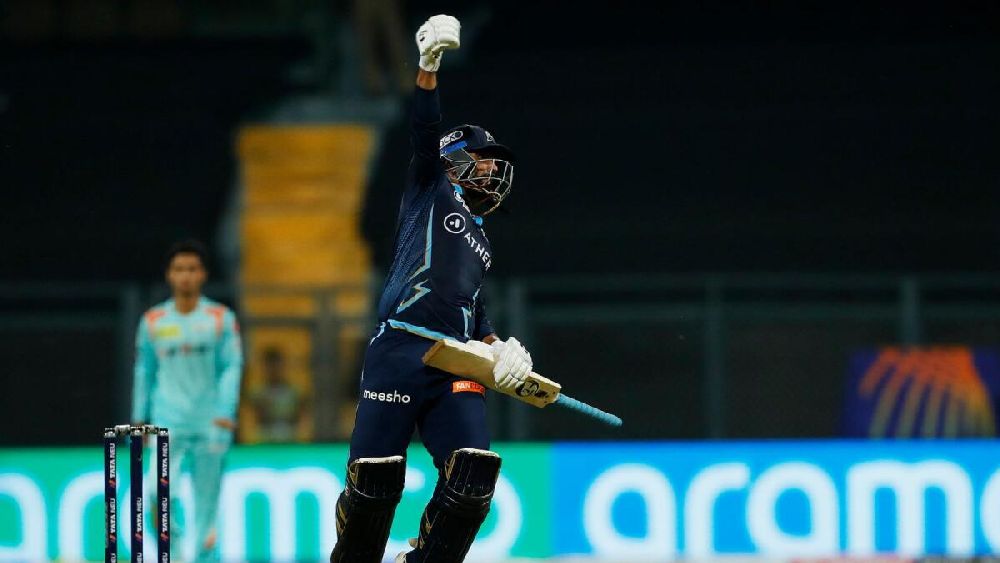 Inspired by a magical innings from Rahul Tewatia, Gujarat Titans won the battle of the new teams in the Indian Premier League with a thrilling five-wicket win over Lucknow Super Giants in Mumbai on Monday.

Chasing 159, the Titans were in trouble when they lost their fourth wicket for 74 in the 12 over.

Despite losing Miller in the 18th over with the team still needing 21 off 15 balls, Tewatia kept his calm and found a good partner in Abhinav Manohar (15 not out, 7 balls, 3 fours).

Tewatia then finished the game in style, hitting Avesh Khan through the covers for a four in the final over.

“The wicket was so good that Miller and I were discussing that we would take it deep and it’s a matter of just one over,” Tewatia said. “After I hit that six with the reverse sweep, that got Bishnoi thinking.” Tewatia then praised Manohar for his cameo.

“Abhinav is a clear striker of the ball, so I had full trust in him that he would come and play his shots straightaway,” he said.

“It’s a big thing to do it in your first game. I gave him the strike because I know he is a proper batter and can hit big shots. We are doing quality practice, not putting long hours. Ashish Nehra has kept the mood in the camp very light.”

Lucknow, who were at a spot of bother with 29/4 at one time, were powered up by Deepak Hooda (55) and youngster Ayush Badoni who scored 54 on his debut.

Mohammad Shami was a man on fire for Gujarat Titans as it was his sensational opening spell that yielded three wickets and left LSG in tatters. Put in to bat first, Super Giants endured a very poor start as Shami struck with the first ball of the match. The Titans pacer bowled a good length delivery, just outside off stump, which nipped away from KL Rahul and got the outside edge of LSG skipper bat to Wade behind the stumps.

In his very next over Shami produced yet another peach of a delivery to dismiss LSG’s other opener, Quinton De Kock.

The pacer again bowled a good length, outside off stump delivery which came in with the angle and nipped back after pitching. The ball then went through the bat-pad gap and the stumps were castled of the South African batter.

In the fourth over, Varun Aaron joined the party for Titans as he sent Evin Lewis back in the pavilion. Bumper from Varun Aaron was hurried up by Lewis, who top-edged the pull, Shubman Gill then ran back from mid-wicket and committed a full-fledged dive to hold onto the sensational catch.

Wickets kept falling for the Uttar Pradesh-based side as Shami bagged his third wicket of the night in the fifth over.

This time it was a delivery outside off stump which did the trick for the Indian veteran pacer as the ball nipped back and rattled the stumps of Manish Pandey.

Lucknow lost their top-4 inside the powerplay as their score read 32/4 after the first six overs.

Hooda and Badoni then started rebuilding the ship for Super Giants as both batters amassed 77 runs in the middle overs with a rate of 8.55 rpo. In the 15th over both batters smashed Titans skipper Hardik Pandya for 19 runs to help Lucknow get back in the game.

With the partnership going strong for LSG, Giants’ spinner Rashid Khan removed dangerous-looking Hooda in the 16th over. The Afghanistan bowler trapped Hooda for 55.

Krunal Pandya then joined Badoni on the crease and both batters kept scoring the runs for LSG. Badoni went back to the pavilion in the last over as LSG’s score read 158/6 after the end of the innings.