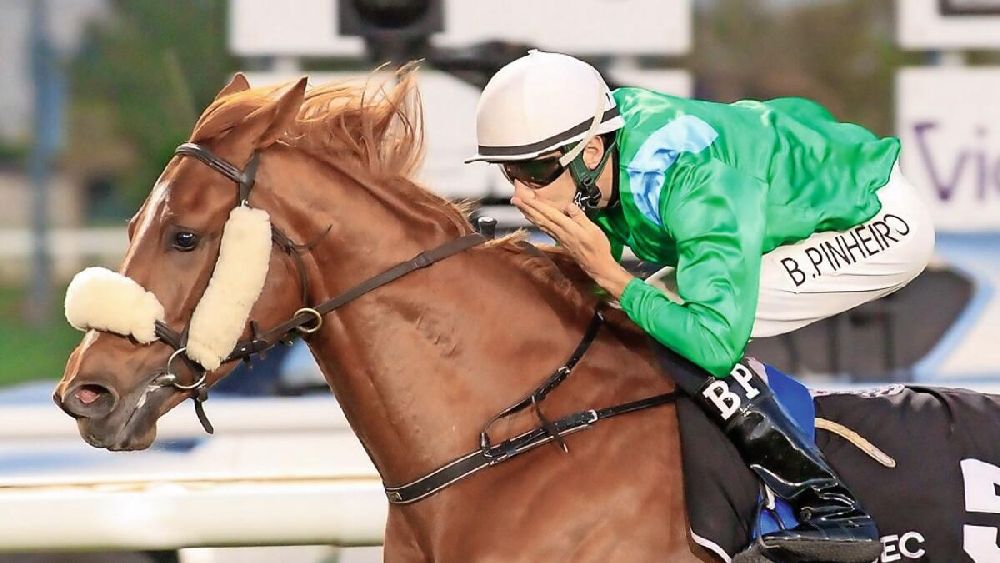 Nine-time UAE Champion Jockey Tadhg O’Shea continued his phenomenal season with a double at Abu Dhabi Racecourse on Thursday, but it was Brazil’s Bernardo Pinheiro who stole the plaudits when taking out the third round of the Arabian Triple Crown (G3) aboard Izadi Star.

Less than two weeks after earning the biggest win of his career when Harrab won the Dh1 million Emirates Championship (G1), Pinheiro delivered another peerless performance on the Helal Alalawi-trained Izadi Star.

A lightly-raced French-bred son of Azadi, the winner followed up his previous success in the second leg of the series, to coast to a three and a half-length victory over course-and-distance winner Sultana, the mount of Panamanian rider Fernando Jara.

It was the third Group 1 victory for Pinheiro who has already made a name for himself in his native Brazil and Malaysia.

“He is just a super, lovely horse and I was confident before the race and then again throughout the race,” said Pinheiro. “He was good last time but has improved a lot since and is a pleasure to ride as a jockey because he just does what you want.

“He is a really nice horse and one to look forward to next season.”

Izadi Star, who was previously campaigned in France before joining the National Stables in Al Ain, provided Alalawi with what was only his third success of the campaign in Abu Dhabi.

Alalawi has sent out 17 winners so far, with eight of them coming at his home track in Al Ain.

However, it was once again a day that belonged to the irrepressible O’Shea, who has left an indelible mark on UAE racing, with his dominance in the jockey ranks.

While Ted Durcan dominated the UAE racing scene for close to 15 years, winning seven championships, it has since been all about the talented County Cork talent, O’Shea.

AF Ramz provided O’Shea with the first leg of his double when reproducing his 2,000m maiden success on the dirt at Al Ain, almost three weeks ago, to land the 2,200 metre Al Hayl handicap by a wide margin of four and a half lengths.

It was AF Ramz’s first success in eight attempts but O’Shea said: “He is a horse we always liked but had a few problems early in his career. He won the last time, just 20 days ago, and that seems to have done his confidence the power of good. “You would like to think there is more to come from him next season.”

O’Shea also won another 2,200m handicap with the Mohamed Daggash-trained Reem Baynounah and then gave the horse a lot of credit.

“To be honest that was pretty much a steering job and the trainer was rightly very confident beforehand.

“I was lucky to get on him because he had a nice low weight and I think he is a really nice horse with a big future.”

The meeting kicked off with a 1,200m maiden, which was won comfortably by Ibn Des Vailettes and Fernando Jara, who said: “This horse has done well to win over that trip because he is probably not a speed horse but one for longer distances going forward.

“He was I think just the best horse in the race.”