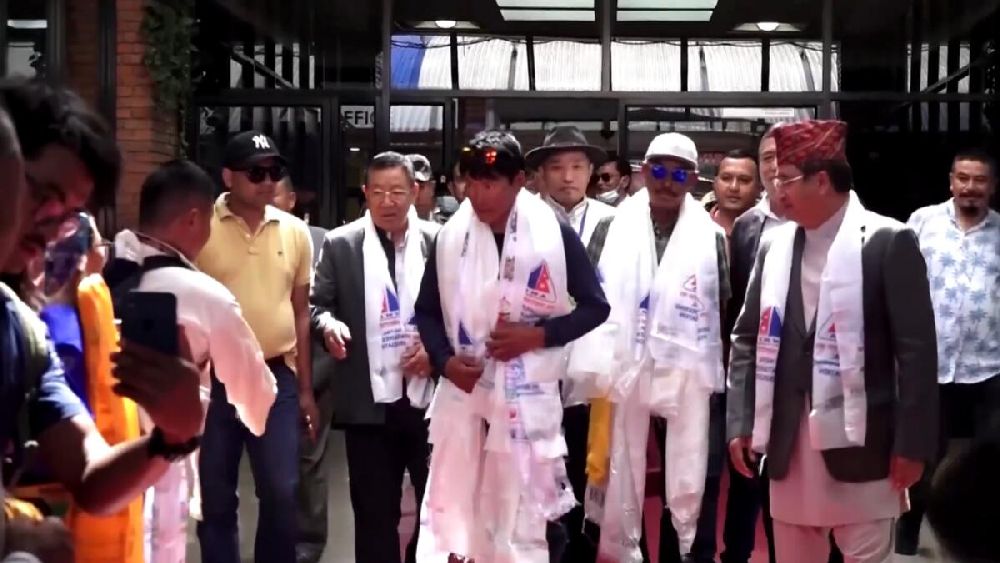 Summiting the world’s 8,000-metre mountains is the ultimate bucket list dream for ambitious climbers — a feat managed by fewer than 50 people — and Sanu Sherpa is the first to do it twice.

The Nepali climber’s summit of Pakistan’s Gasherbrum II (8,035m) last month completed his unprecedented double ascent of the eight-thousanders — as the 14 peaks are collectively known.

As usual, he was guiding a paying customer — this time a Japanese climber — to the top.

“What I have done is not something that is impossible,” the 47-year-old told AFP.

Sherpa, who began working in mountaineering as a porter and kitchen aid, climbed his first 8,000m peak in 2006, while guiding a South Korean group to the summit of Cho Oyu.

“I felt like the Korean climbers would not be able to summit the mountain, but I had to as I would not get work if I returned unsuccessfully,” he said.

Nepali guides — usually ethnic Sherpas from the valleys around Everest — are considered the backbone of the climbing industry in the Himalayas. They carry the majority of equipment and food, fix ropes and repair ladders.

It can be a perilous occupation. Altitudes above 8,000m are considered a “death zone”, where there is not enough oxygen in the air to sustain human life for long periods.

On average, 14 people die every year on the 8 eight-thousanders of Nepal. About a third of the deaths on Everest those of Nepali guides and porters, underscoring the risks they take to enable their clients’ dreams of reaching the world’s highest peaks.

“I have seen many dead bodies while going up or descending the mountain,” said Sherpa.

“I am walking the same route or the same mountain,” he added.

“How would my family and children live if I met the same fate?”

Sherpa grew up in the Sankhuwasabha district of eastern Nepal — an impoverished and remote rural area that includes Makalu, the world’s fifth-highest mountain.

He was farming potatoes and corn, and grazing yaks at the age of 30 — when many of his peers were making more money on the peaks.

“I used to ask myself, if those who could not even carry as much as me were returning to the village after climbing mountains, why couldn’t I?” he said.

He eventually decided to follow suit, hoping the work would help him support his family of eight, and fulfil his dream of “wearing mountain gear”.

He donned another climber’s hand-me-down boots for his Cho Oyu summit, which paved his way to working as a guide on the other eight-thousanders.

By 2019, he had double summits on half of the 14 peaks, and a foreign climber suggested he try to complete the set.

Long in the shadows as supporters of their paying foreign customers — it costs more than $45,000 to climb Everest — Nepali mountaineers are slowly being recognised in their own right.

In recent years, several films have helped shine a light on the key role of Nepali climbers, including Sherpa (2015), and more recently, 14 Peaks: Nothing is Impossible (2021).

Nepal’s culture and tourism minister Jeevan Ram Shrestha said that Sherpa’s double ascent record had established him as “a source of inspiration for climbers around the world”.

Sherpa has climbed Everest seven times, and has triple ascents on another four of the 14 peaks.

Back in Kathmandu after last month’s record-setting climb, he is preparing for a fourth summit of Manaslu, the world’s eighth-highest mountain, with a client, and is getting offers for other expeditions.

“I can do triple ascents,” he said. “But, maybe that depends also on luck.”

Sherpa says his family often tell him he has faced enough challenges in the mountains and the time has come to hang up his boots.

“Sometimes I want to go and sometimes I don’t want to,” he said.

“What to do except climbing? There is no other job.”