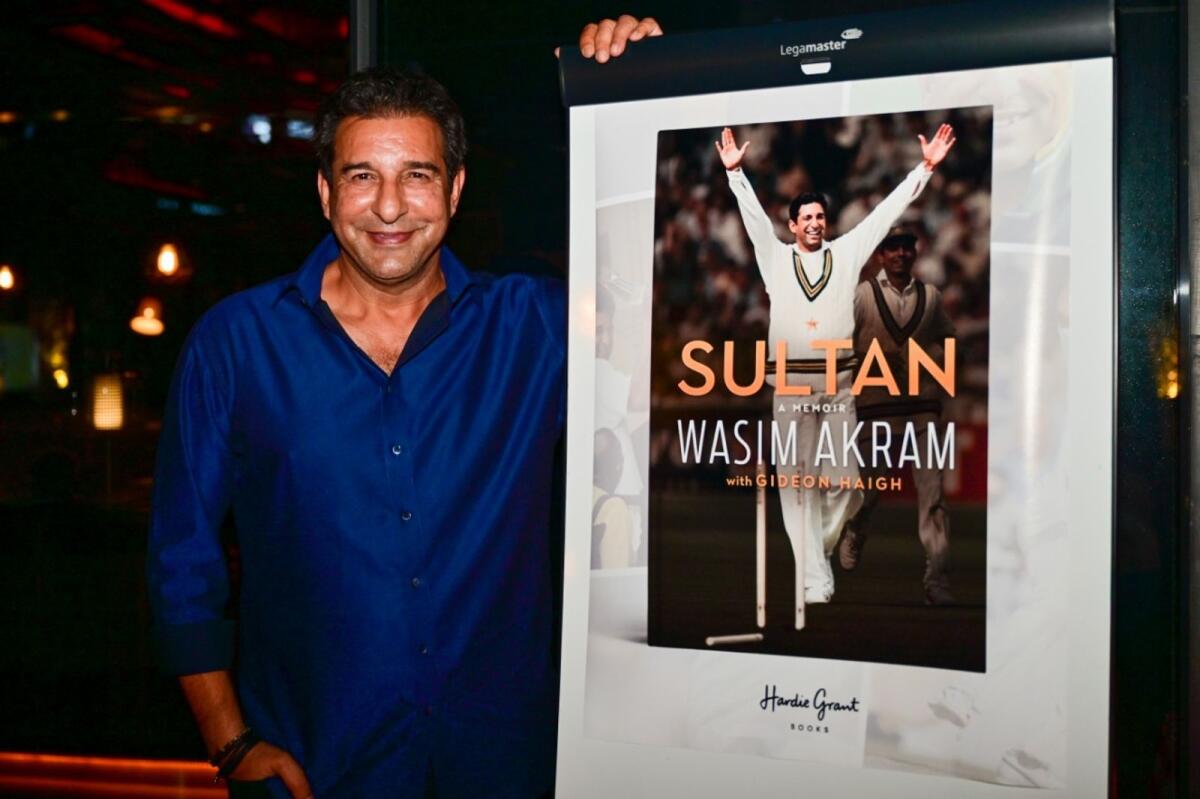 When you ask anyone with a soft spot for humanity, to talk about the message in their life story, often enough, they get emotional and say something that is flat-out breathtaking.

So, if you’ve never read a cricket book before, this is the time to get your hands on ‘Sultan A Memoir,’ the official autobiography of Wasim Akram, one of the greatest fast bowlers in the history of the game, who made an art out of reverse swing bowling,

Speaking exclusively to Khaleej Times during a private, soft-launch of the hardback which will soon hit the shelves in bookshops across the UAE, Akram talked about the daunting but illuminating experience of revisiting the triumphs and pitfalls in what was an exemplary 20-year cricketing career.

“The book is not out officially in the UAE but I wanted to invite some of my closest friends to join me in this very emotional evening,” said Akram.

“The book represents my personal struggles my triumphs, and my ups and downs in life. I am a human being at the end of the day, I too make mistakes. I have been through a lot on and off the field and I have made mistakes. It’s normal, it’s natural.

“This book will resonate with people who, like me, have been through a lot and in the end, the message is to learn from your mistakes,” added Akram who struck fear in the hearts of every batsman in the world with his explosive in-swing and out-swinging deliveries.

Sultan also tells the story of a promising young man who was discovered on the streets of Lahore and nurtured by the legendary Imran Khan, to become one of the greatest exponents of his trade.

Who can ever forget his magical performance in 1992 where he led Pakistan to victory over England and helped them lift their first-ever World Cup trophy.

Now, it was the turn to tell the back story of the drama and mystery of a life that was by no means perfect.

“What I have learned over the years is what matters most and above all, is friendship,” he said. “And I have been very fortunate to have made good friends with people from all over the world. From England to Australia, India to the West Indies. Everywhere.

“People change, people learn. I have said that this is an honest book. Yes, it was difficult to revisit incidents or some tragedies in my life. But with the help of my wife Shaniera, who motivated me to write the book, I was able to tell my story,” Akram added.

“This is a straightforward book and, through it, I spoke about my demons and how I moved on,” elaborated Akram, just months short of his 57th birthday.

“The idea was to motivate people as well. If I can make mistakes, if I can do silly stuff and move on from it.. then if any one person can get motivated from this book, I believe I have done my job,” he says, in all honesty.

Akram also pointed out that he paid attention to the unwritten code of conduct that goes into the writing of a memoir and did not divulge anything that could be hurtful.

“I only spoke about the politics in Pakistan cricket, and if you are a Pakistani cricketer, then you know there is never a dull moment on and off the field. All of that is in the book,” he said.

“So finally, after many years of silence, you have the real story and this is for you. I’m blessed to have friends from all over the world and I want to say, that I love you guys so much.”

Sultan A Memoir was written by Gideon Haigh, an English-born Australian journalist and non-fiction author.

Sports
. The Asian Cricket Council will decide on an alternate venue for the Asia

Sports
. Zander Lombard will take a narrow one-shot lead into the final round of