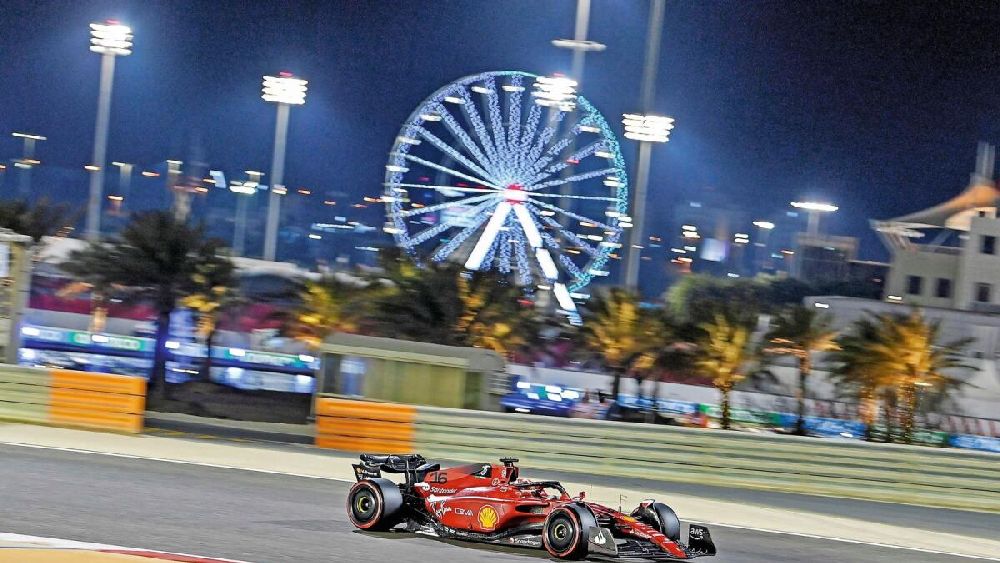 Leclerc was 0.123 seconds faster than Red Bull’s Verstappen while Carlos Sainz will start third on the grid in the second Ferrari.

“It feels good! The last two years have been incredibly difficult for the team,” said Leclerc, who took the 10th Formula One pole of his career.

“I think we have worked extremely well as a team, very happy with today. I wasn’t completely happy with my driving but managed to do that lap in Q3 and we start from pole, so very happy.”

Sergio Perez qualified fourth in the second Red Bull ahead of Lewis Hamilton in fifth. The seven-time world champion was a distant 0.680sec off the pace in his Mercedes.

Valtteri Bottas came sixth in his first qualifying session for Alfa Romeo since leaving Mercedes at the end of last season.

Kevin Magnussen, back at Haas after replacing Russian driver Nikita Mazepin, took seventh ahead of Fernando Alonso in his Alpine car.

“We were fairly sure the Red Bull would be quicker than us, especially in qualifying,” Leclerc continued. “So pleasant surprise! I will stay cautious, the race is long and anything can happen.”

Verstappen topped the times in the second and third practice sessions, but the Dutchman was pipped to pole by Leclerc after a poor final sector.

“I think it was a bit hit and miss, Q2 seemed good, Q3 was more of a struggle to get the balance together,” said Verstappen.

“We have a good race car, which overall is the most important. A few things to look into and we’ll try to do better for next time.

“It was nice, a close battle with Carlos and Charles – hopefully it’s going to be a good race.”

Hamilton said his Mercedes had been “a bit of a nightmare to drive”. The team have been battling with ‘porpoising’ – a bouncing sensation that is caused by the unstable management of the aerodynamics of the new cars.

“The guys ahead of us are in another league. In general I’m happy where we are, it’s not the front row but we will make improvements as well as we can,” Hamilton told Sky Sports.

“These guys (Red Bull and Ferrari) will be going ahead, we are not in the fight with them, my battle is with the guys behind us. Their performance was quite a bit ahead of us.”

Nico Hulkenberg could only manage 17th in his first outing since October 2020 as a stand-in for Sebastian Vettel, the Alfa Romeo driver absent after testing positive for Covid-19.

Formula One’s governing body said Saturday that “human error” was responsible for the controversial ending to last season’s finale in Abu Dhabi which saw Verstappen crowned champion ahead of Hamilton.

But the FIA said in its report that race director Michael Masi had acted in “good faith and to the best of his knowledge given the difficult circumstances”.

Masi has since been removed from his post and race control restructured.

The FIA report ruled last year’s result was “valid and final”, and Mercedes team boss Toto Wolff said it was time to “turn the page”.

Sunday’s Grand Prix is the first of a revised 22-race calendar, trimmed from 23 events following the cancellation of the Russian Grand Prix.

The sport’s most sweeping technical rule changes in 40 years, featuring new race management and all-new cars designed to create closer racing, may throw up some shocks this season.

They include the return of ‘ground effect’ aerodynamics for the first time since 1983 with much bigger wheels and fatter tyres, a freeze on power unit development and a tighter budget cap, down to 140 million dollars (127.4 million euros) excluding drivers’ salaries.