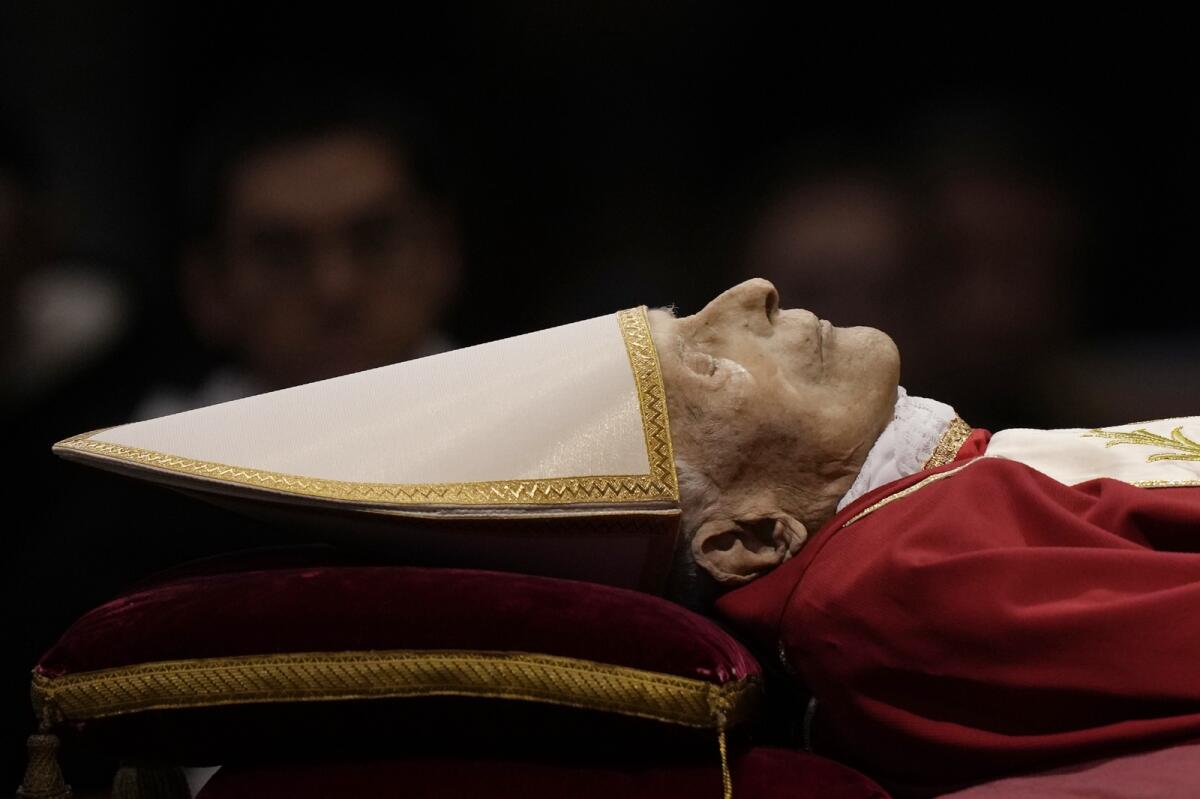 Pope Emeritus Benedict XVI ‘s body, his head resting on a pair of crimson pillows, lay in state in St. Peter’s Basilica on Monday as thousands of people filed by to pay tribute to the pontiff who shocked the world by retiring a decade ago.

As daylight broke, 10 white-gloved Papal Gentlemen — lay assistants to pontiffs and papal households — carried the body on a cloth-covered wooden stretcher after its arrival at the basilica to its resting place in front of the main altar under Bernini’s towering bronze canopy.

A Swiss Guard had saluted as the body was brought in via a side door after Benedict’s remains, placed in a van, were transferred from the chapel of the monastery grounds where the increasingly frail, 95-year-old former pontiff had passed away on Saturday morning. 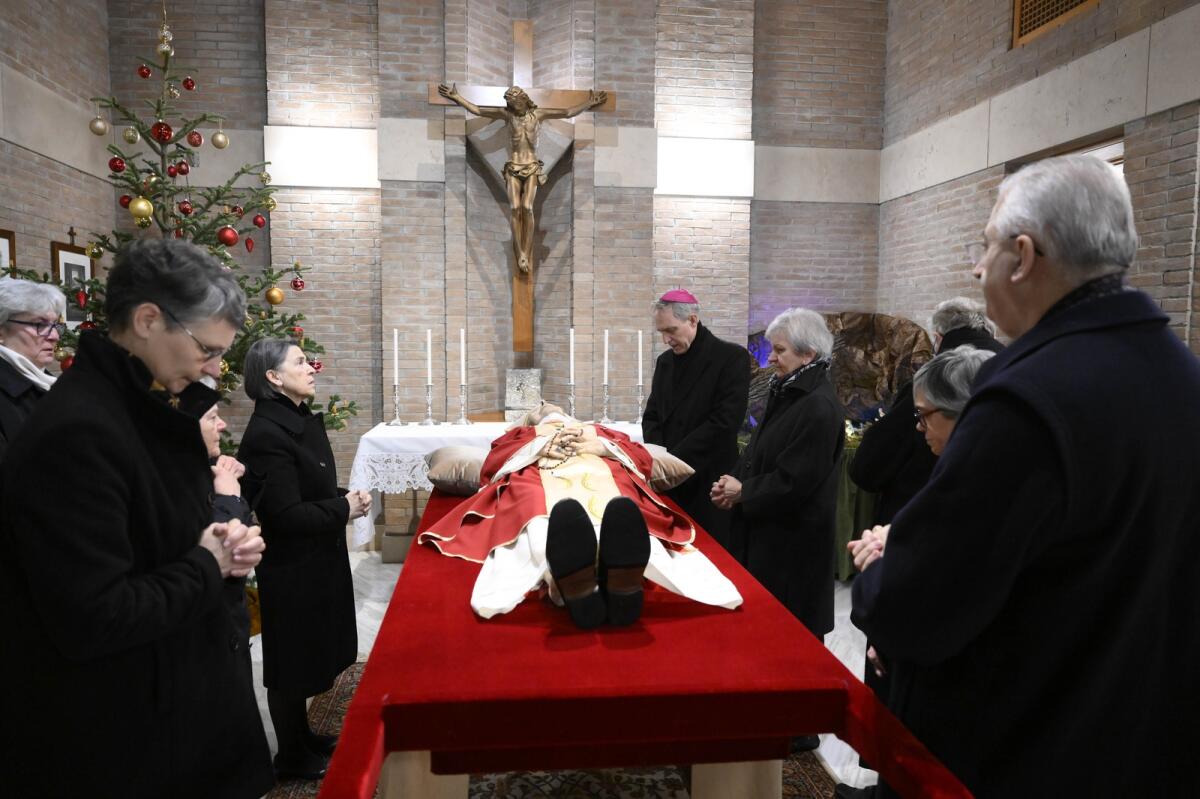 His longtime secretary, Archbishop Georg Gaenswein, and a handful of consecrated laywomen who served in Benedict’s household, followed the van by foot for a few hundred yards (meters) in a silent procession toward the basilica. Some of the women stretched out a hand to touch the body with respect. 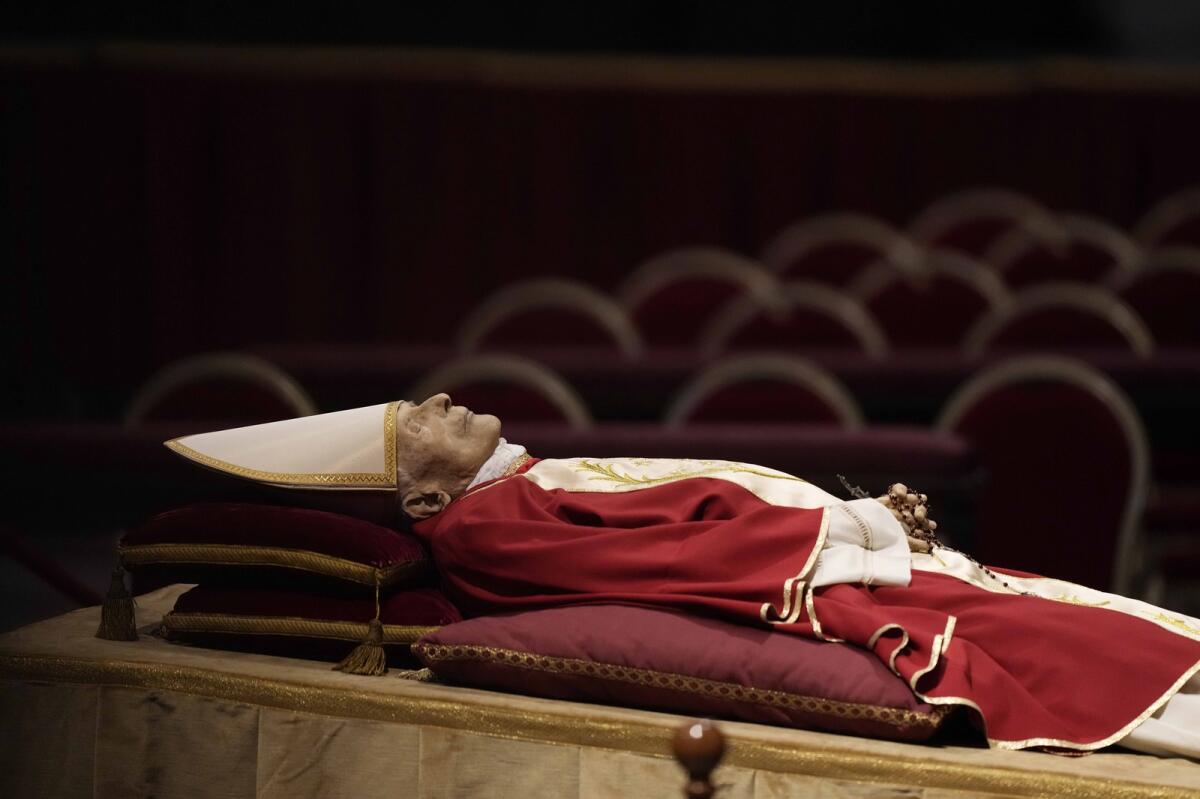 Before the rank-and-file faithful were allowed into the basilica, prayers were recited and the basilica’s archpriest, Cardinal Mauro Gambetti, sprinkled holy water over the body, and a small cloud of incense was released near the bier. Benedict’s hands were clasped, a rosary around his fingers. 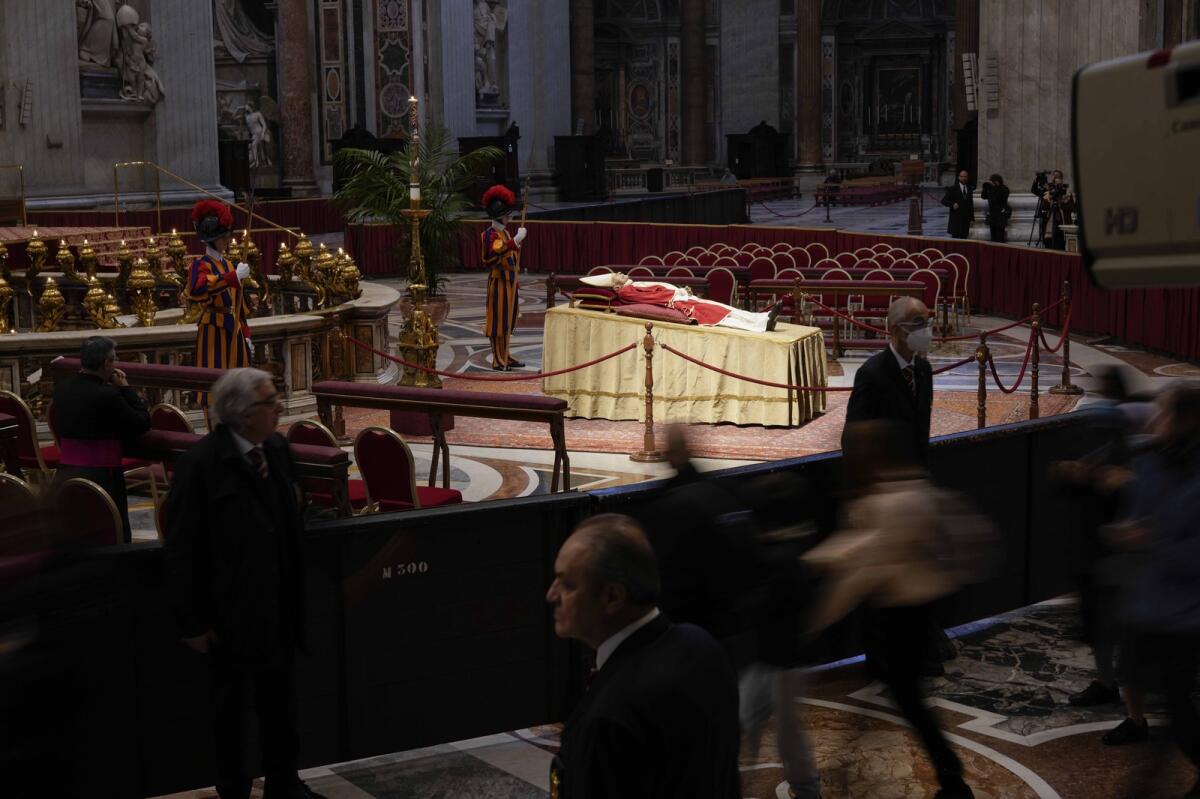 Just after 9 a.m. (0800 GMT), the doors of the basilica were swung open so the public, some who had waited for hours in the dampness before dawn, could pay their respects to the late pontiff, who retired from the papacy in 2013 to become the first pope to do so in 600 years.

Faithful and curious, the public strode briskly up the center aisle to pass by the bier with its cloth draping after waiting in a line that by midmorning snaked around St. Peter’s Square. 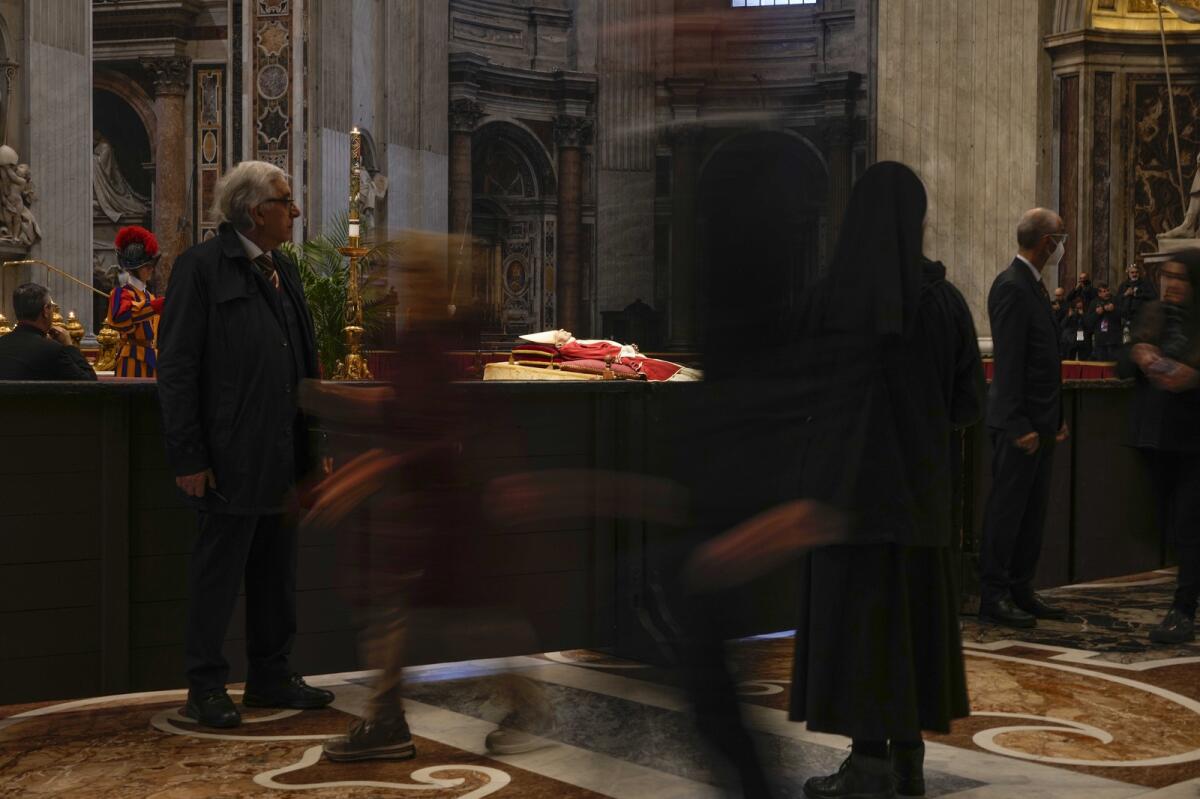 Benedict’s body was dressed with a miter, the peaked headgear of a bishop and a red cloak.

Filippo Tuccio, 35, came from Venice on an overnight train to view Benedict’s body.

“I wanted to pay homage to Benedict because he had a key role in my life and my education. I arrived here at around 7:30, after leaving Venice last night,” Tuccio said.

“When I was young I participated in World Youth Days,” said the pilgrim, referring to the jamborees of young faithful held periodically and attended by pontiffs. Tuccio added that he had studied theology, and “his pontificate accompanied me during my university years.” 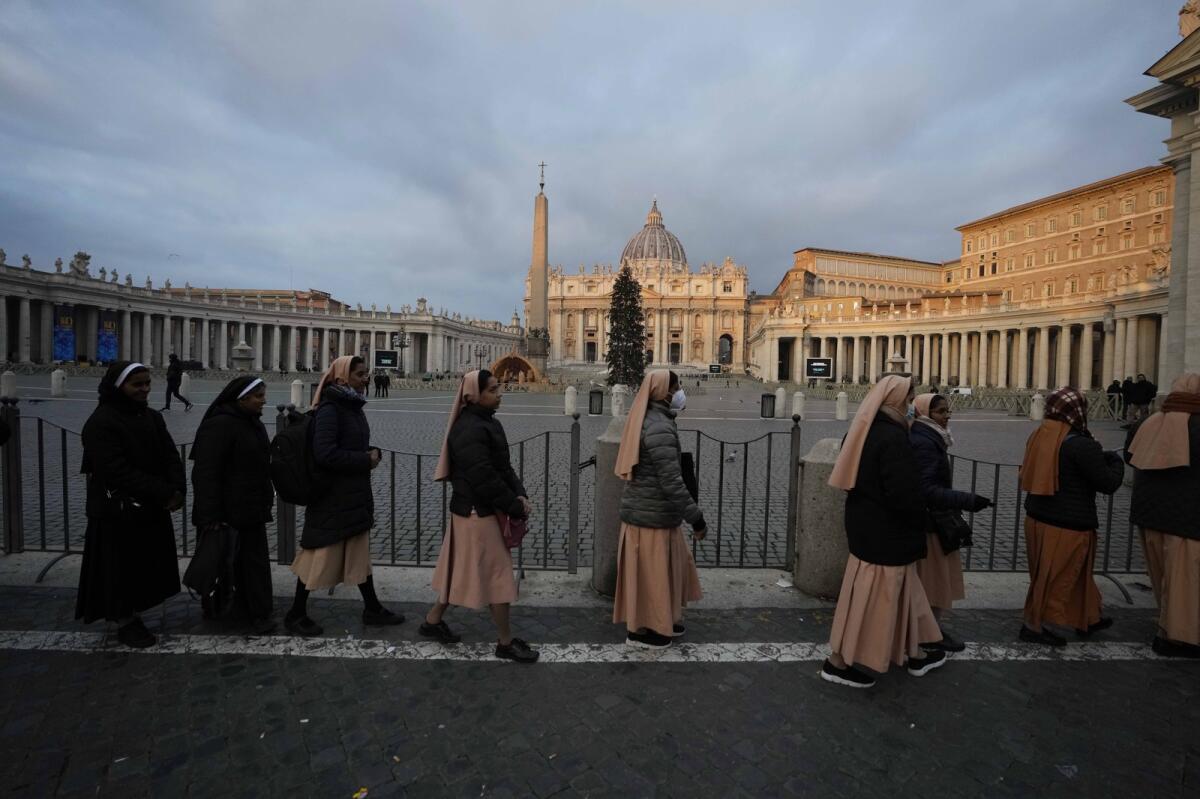 “He was very important for me: for what I am, my way of thinking, my values. This is why I wanted to say goodbye today.”

Among those coming to the basilica viewing was Cardinal Walter Kasper, like Benedict, a German theologian. Kasper served as head of the Vatican’s Christian unity office during Benedict’s papacy. 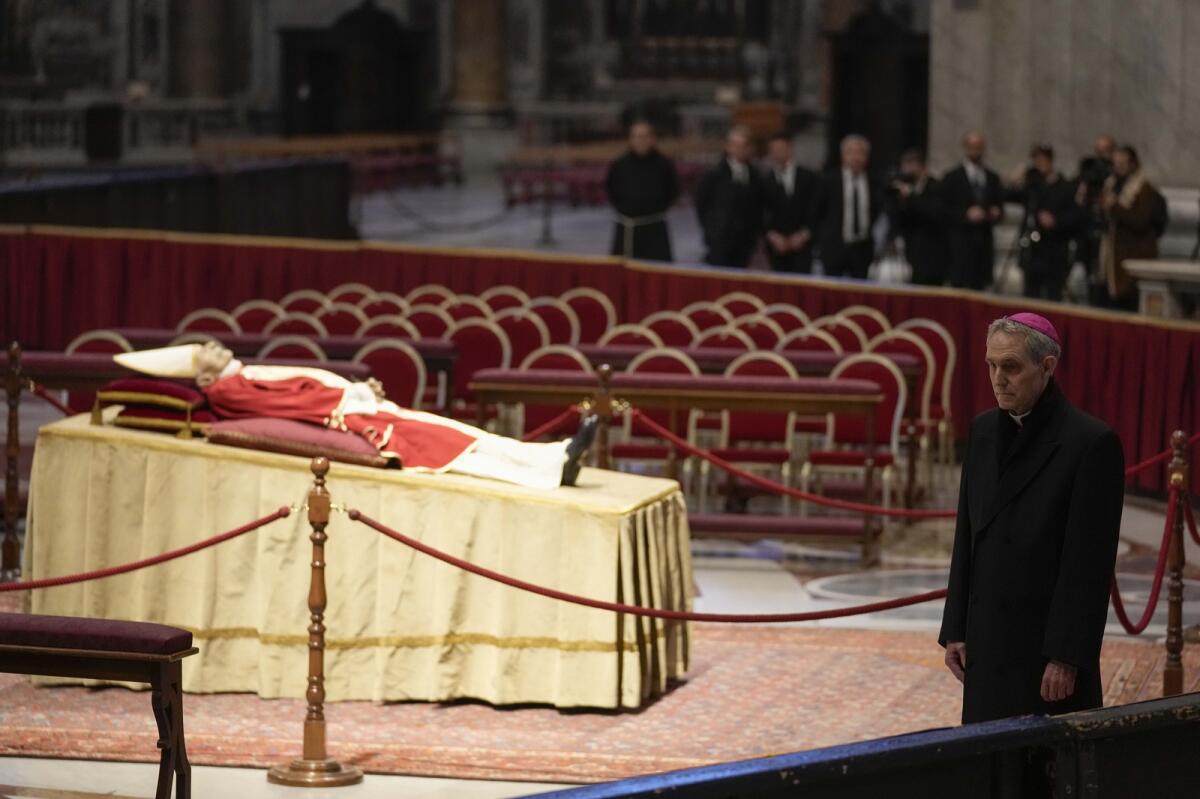 Benedict left an “important mark” on theology and spirituality, but also on the history of the papacy with his courage to step aside, Kasper told The Associated Press.

“This resignation wasn’t a sign of weakness, but a sign of strength, a greatness because he saw that he was no longer up to the challenges of being pope,” Kasper said.

Kasper, who was among the cardinals who elected Benedict to the papacy in 2005, added that the resignation decision gave “a more human vision to the papacy: that the pope is a man and is dependent on his physical and mental strengths.” 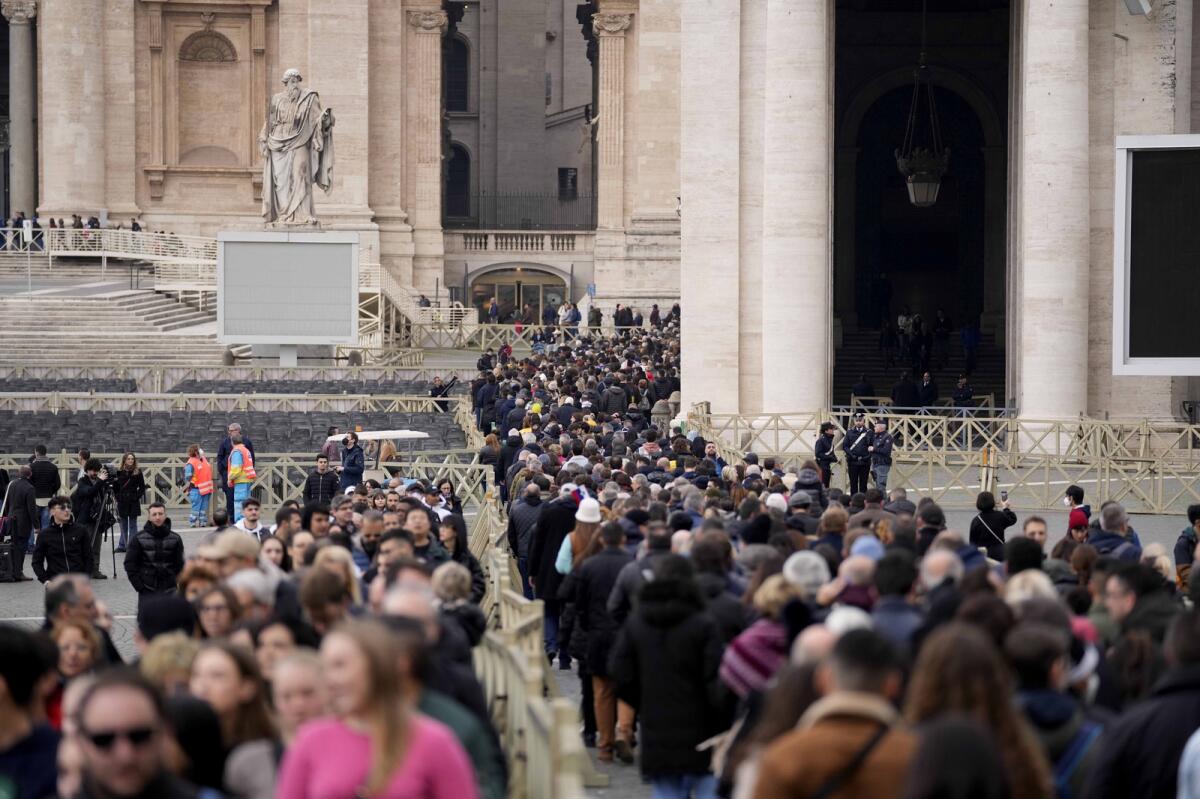 Public viewing lasts for 10 hours on Monday in St. Peter’s Basilica. Twelve hours of viewing are scheduled for Tuesday and Wednesday before Thursday morning’s funeral, which will be led by Pope Francis, at St. Peter’s Square.

Security officials expected at least 25,000 people to pass by the body on the first day of viewing. 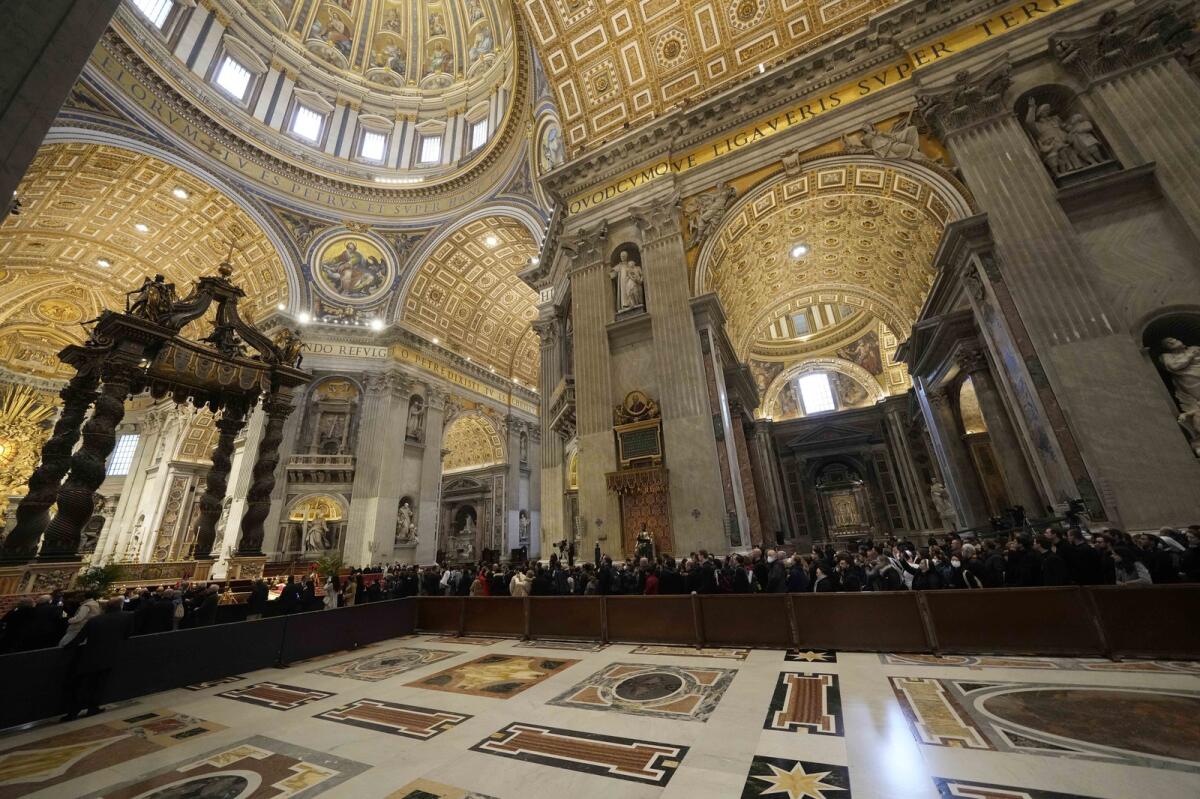 At two sides of the piazza’s colonnade, viewers went through the usual security measures required for tourists entering the basilica — passing through metal detectors and screening bags through an X-ray machine.

Marina Ferrante, 62, was among them. The Roman arrived an hour before the doors were opened, and she grew emotional when she explained why she came. 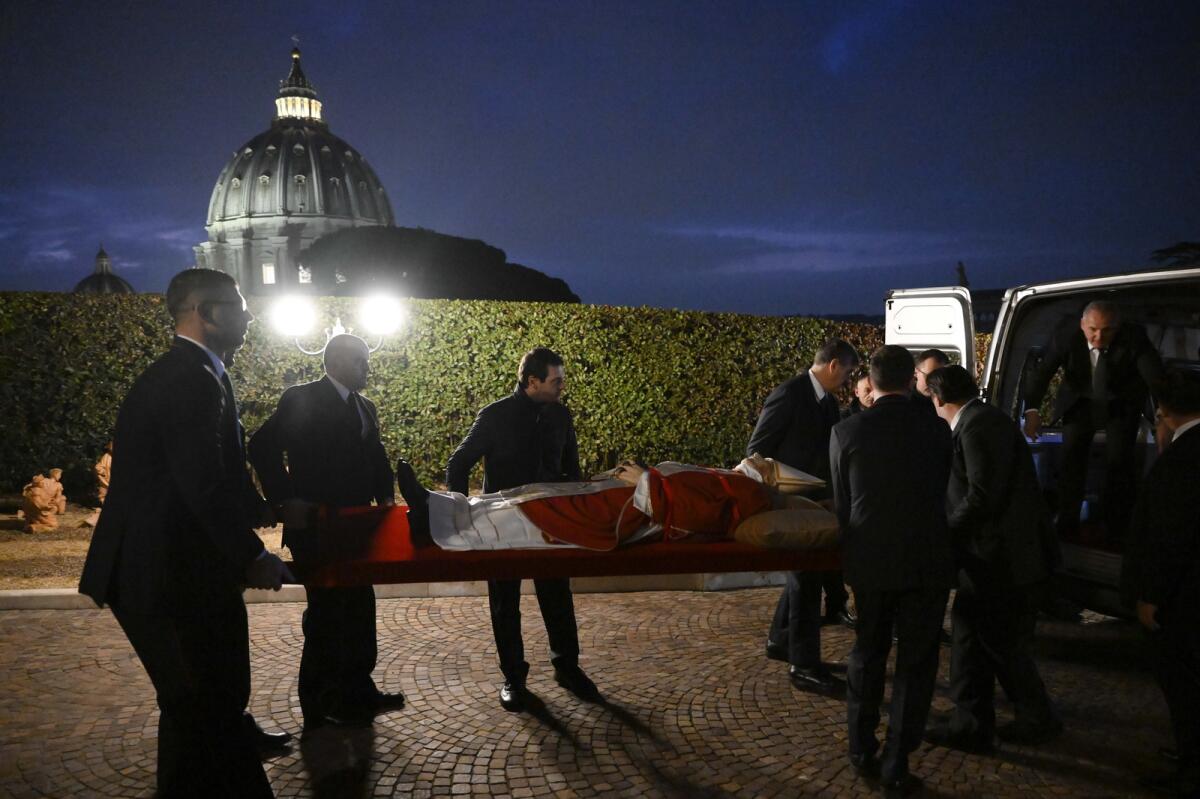 “I think his main legacy was teaching us how to be free,” she said. “He had a special intelligence in saying what was essential in his faith and that was contagious” for other faithful. “The thing I thought when he died was that I would like to be as free as he was.”

While venturing that the shy, bookworm German churchman and theologian and the current Argentine-born pontiff had different temperaments, “I believe there’s a continuity between him and Pope Francis and whoever understands the real relationship between them and Christ can see that,” Ferrante said. 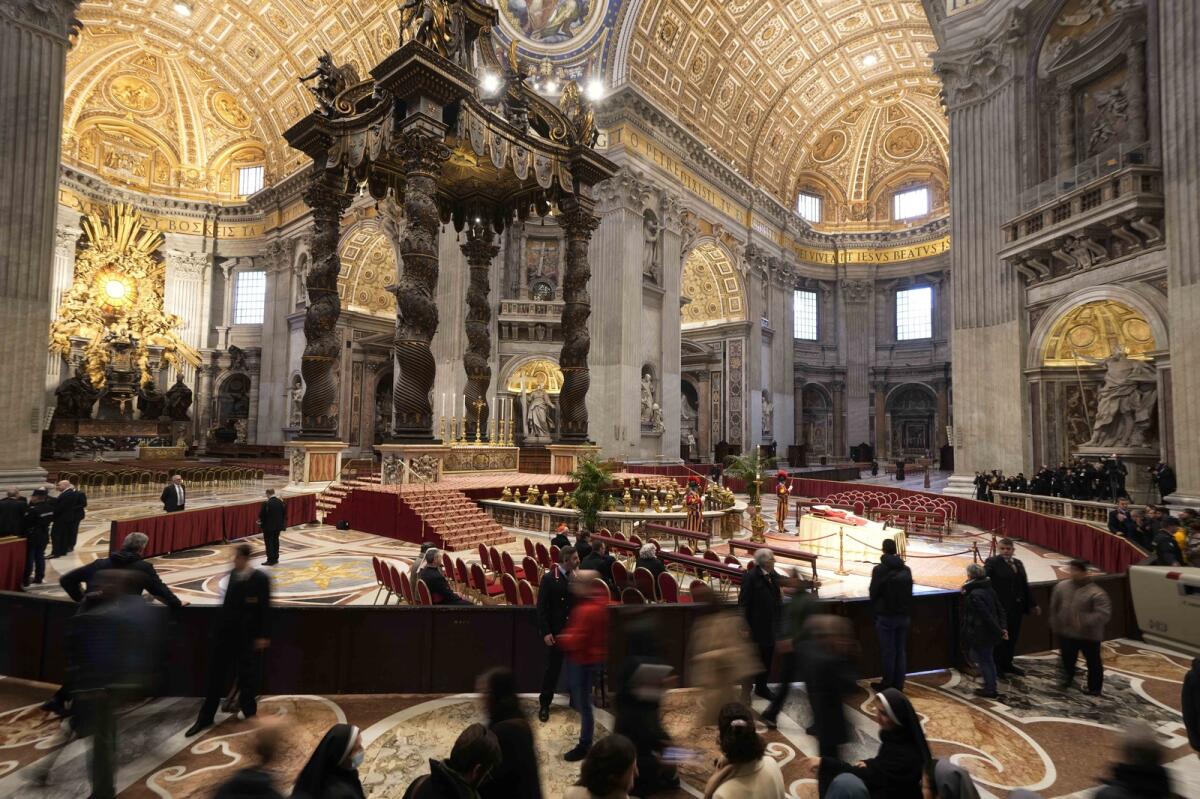 An American man who lives in Rome called the opportunity to view the body “an amazing experience.” Mountain Butorac, 47, who is originally from Atlanta, said he arrived 90 minutes before the dawn open and left the basilica a half-hour after it opened.

“I loved Benedict, I loved him as a cardinal (Joseph Ratzinger), when he was elected pope and also after he retired,” Butorac said. “I think he was a sort of people’s grandfather living in the Vatican.” 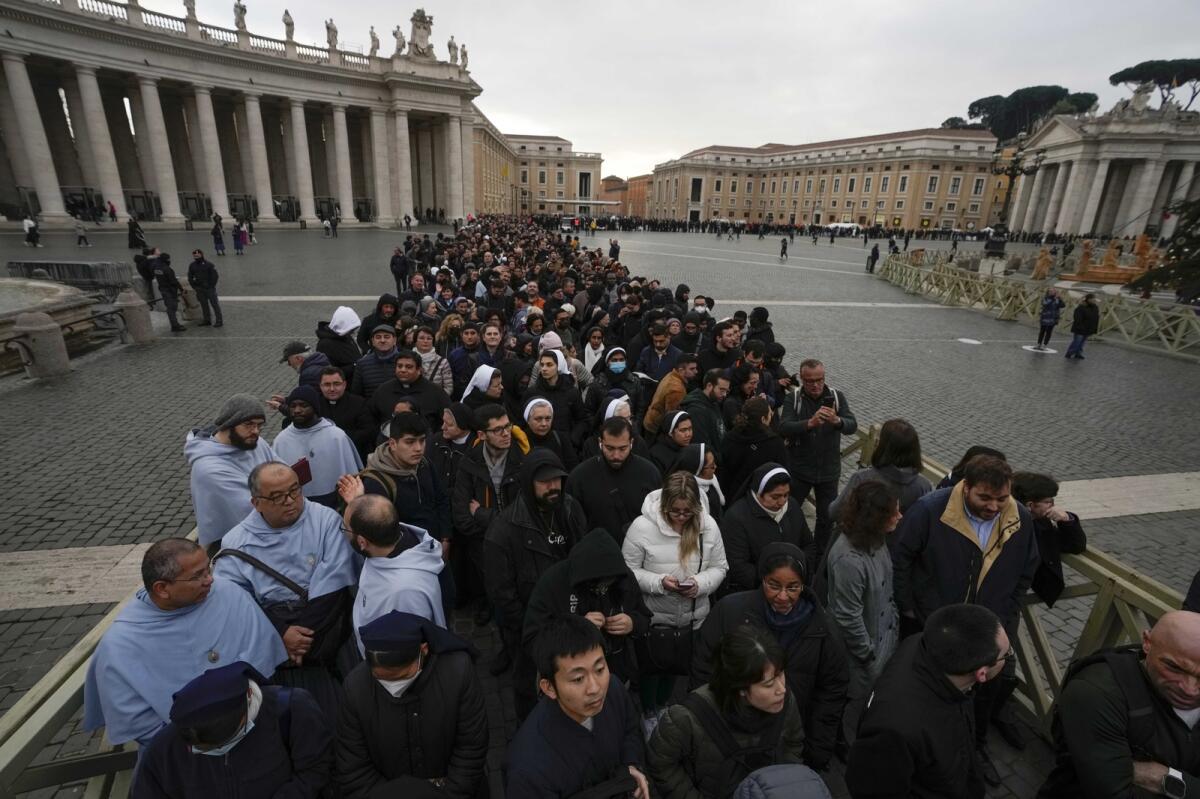 He came to the Vatican to pray for Benedict when he was ailing, “so I wanted to be here today to say goodbye. I think he and Francis were close, they cared for each other,” he said.

With an organ and choir’s soft rendition of “Kyrie Eleison” (“Lord, have mercy” in Latin) in the background, ushers moved well-wishers along at a steady clip down the basilica’s center aisle and then nudged them gently forward, saying, in Italian, “avanti” (keep going) to keep the pace brisk. Someone left a red rose. 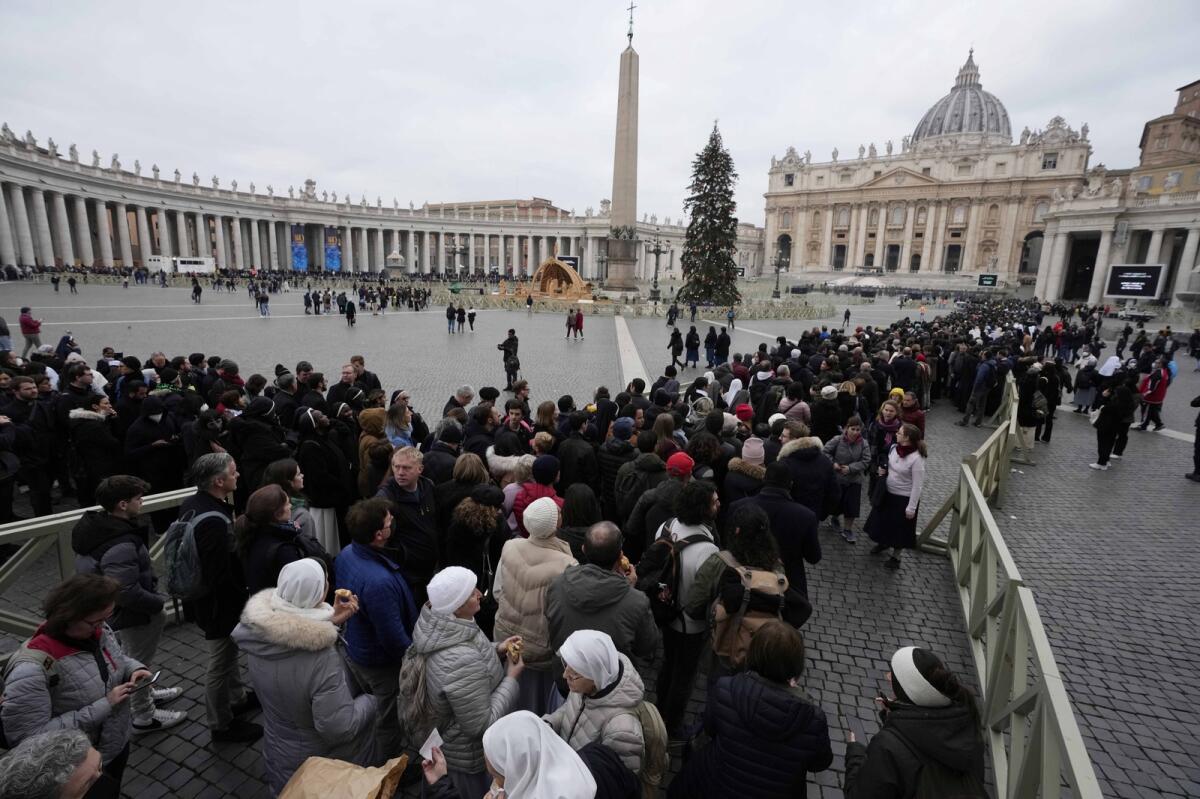 A few VIPs had a moment before the general public to pay their respects, including Italian Premier Giorgia Meloni, the far-right leader who in the past has professed admiration for the conservative leanings of Benedict.

Italian President Sergio Mattarella also came to view the body. The Vatican has said only two nations’ official delegations — from Italy and from Benedict’s native Germany — were invited formally to the funeral, since the pope emeritus was no longer head of state.

Sister Regina Brand was among the mourners who came to the square before dawn.

“He’s a German pope and I am from Germany,” she said. “And I am here to express my gratitude and love, and I want to pray for him and to see him.”