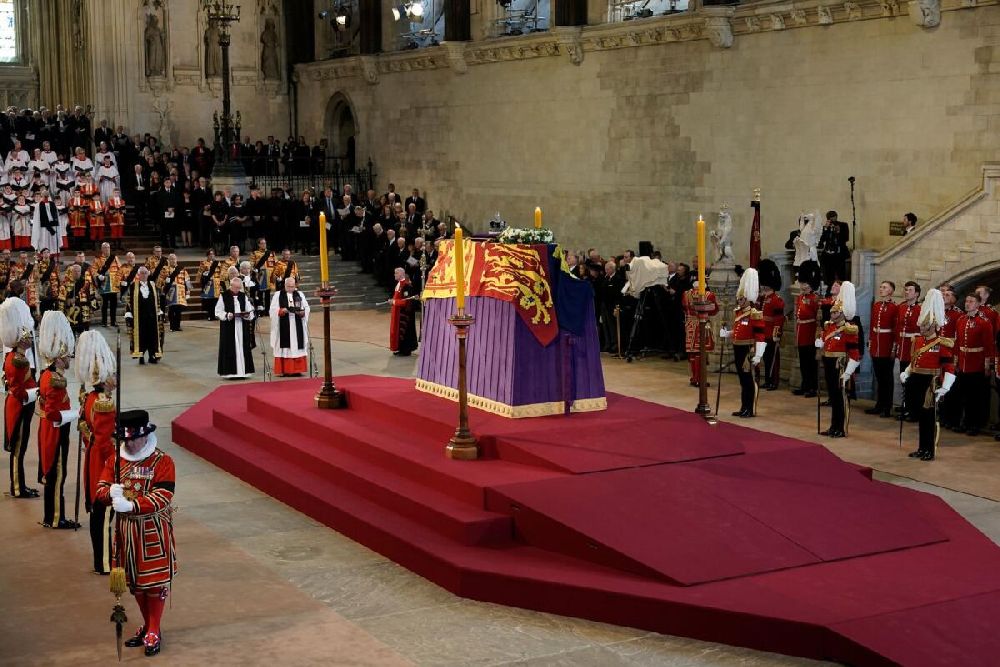 Queen Elizabeth II left Buckingham Palace for the last time Wednesday, her coffin borne to the Houses of Parliament by a horse-drawn gun carriage and trailed by grieving family members.

The coffin will lie in state for four days until the late monarch’s funeral on Monday, with hundreds of thousands of people expected to file past. Eight pall bearers carried the oak and lead-lined coffin into Westminster Hall, placing it on a raised platform known as a catafalque. 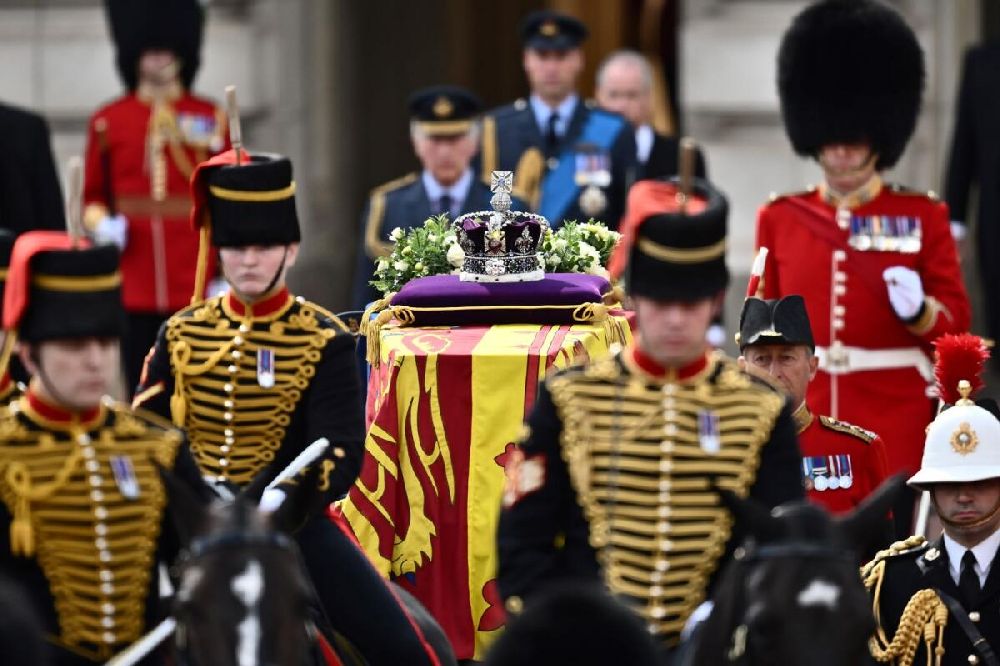 With the Royal Standard and crown of state resting on top of the coffin and artillery firing salutes at one-minute intervals, the solemn procession from Buckingham Palace was designed to underscore the queen’s seven decades as head of state as the national mourning process shifted to the grand boulevards and historic landmarks of the U.K. capital.

King Charles III, his sons Princes William and Harry and other members of the royal family walked behind the gun carriage. 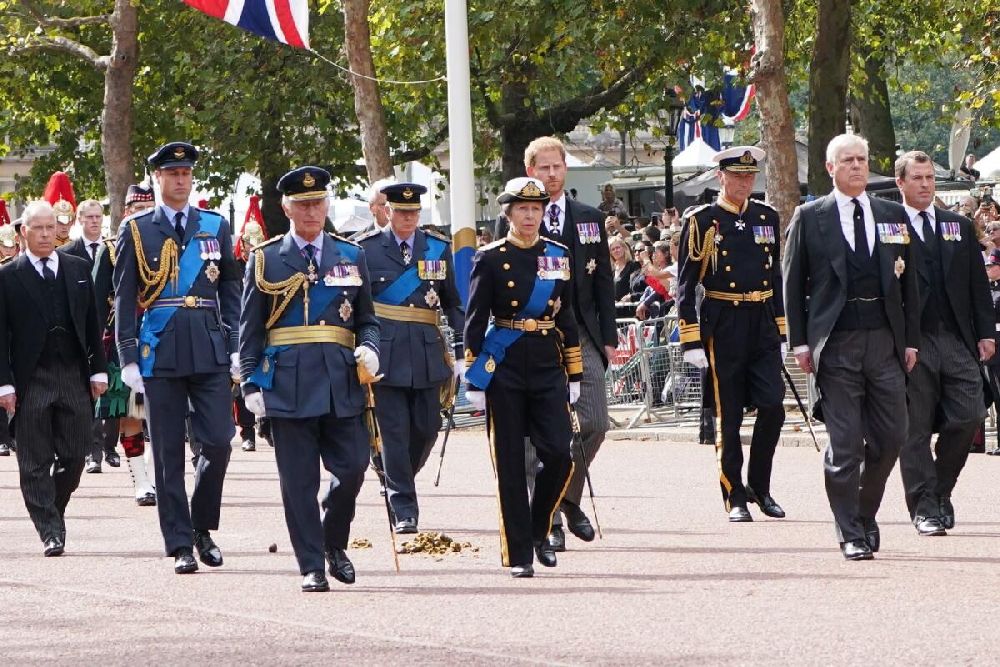 Thousands of people who had waited for hours along The Mall outside the palace and other locations to line the route held up phones and cameras, and some wiped away tears, as the procession passed. Applause broke out as it went through Horse Guards Parade.

The coffin was draped in the Royal Standard and topped with the Imperial State Crown – adorned with almost 3,000 diamonds — and a bouquet of flowers and plants including pine from the Balmoral Estate, where Elizabeth died last week. 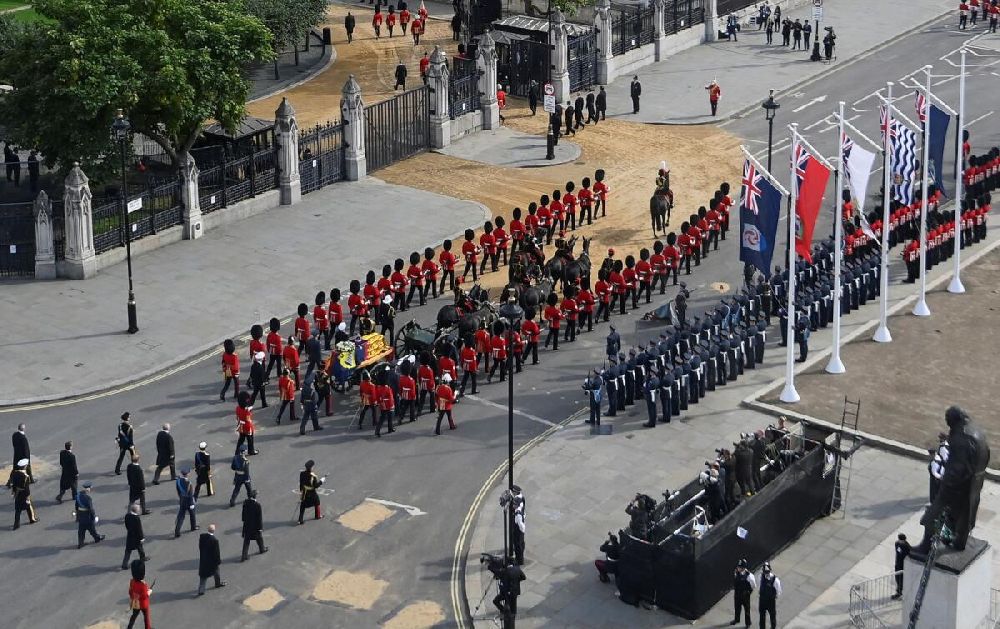 An escort of two officers and 32 troops from the 1st Battalion Grenadier Guards in red uniforms and bearskin hats walked on on either side of the gun carriage. Big Ben tolled, a gun salute boomed from Hyde Park and the martial strains of a military band accompanied the procession.

The 38-minute procession ended at Westminster Hall, where Archbishop of Canterbury Justin Welby led a service attended by Charles and other royals after the coffin was brought in. The choir of Westminster Abbey and the Choir of His Majesty’s Chapel Royal sang the words of a psalm.

“Let not your heart be troubled: ye believe in God, believe also in me. In my Father’s house are many mansions: if it were not so, I would have told you,” Welby said as he read from the Book of John. 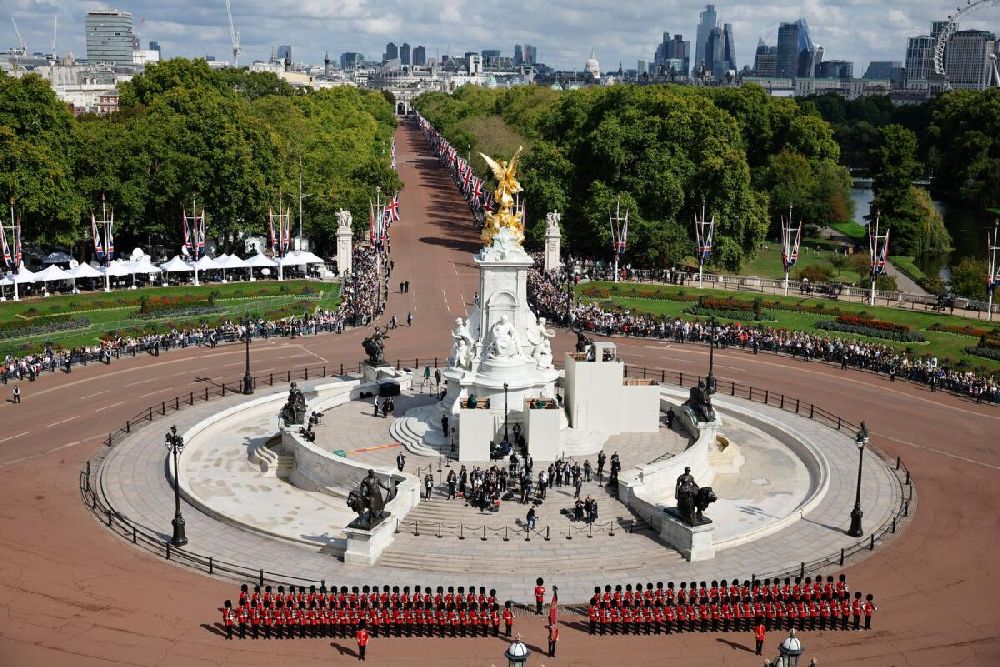 Thousands of people were standing or sitting in line along the banks of the River Thames waiting their turn to file past the coffin and pay their respects.

The crowds are the latest manifestation of a nationwide outpouring of grief and respect for the only monarch most Britons have ever known, who died at her beloved Balmoral summer retreat on Thursday at age 96, ending a 70-year reign.

Joan Bucklehurst, a 50-year-old retail worker from Cheshire in northwestern England, said the queen “meant so much for everybody.” 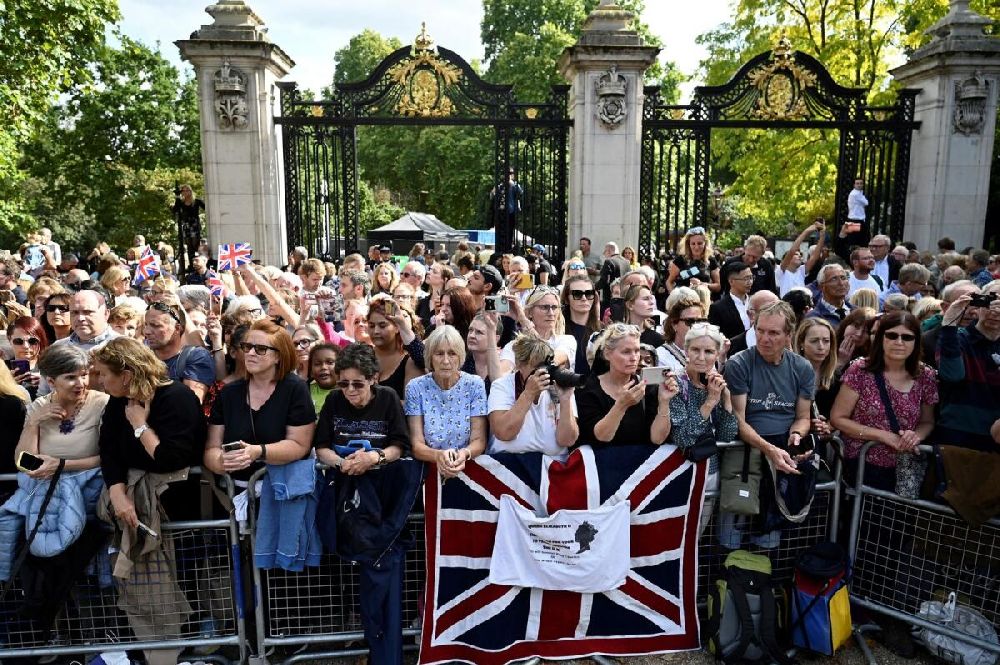 “She was amazing, yeah,” she added, choking up with emotion. “So, we had to be here. We’ve been here a few times when there have been special occasions, but this one, I couldn’t miss this.” 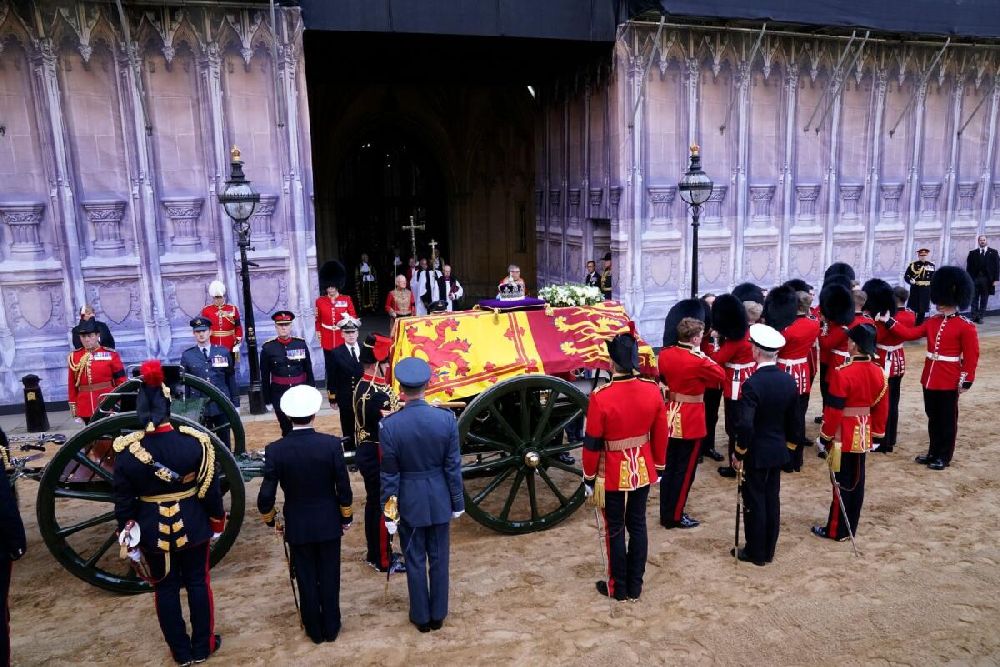 The airport said in a statement that the changes would “ensure silence over central London as the ceremonial procession moves from Buckingham Palace to Westminster Hall.”

Troops involved in the procession have been preparing since the queen died. So have the horses of the King’s Troop Royal Horse Artillery.

Sgt. Tom Jenks, from the King’s Troop Royal Horse Artillery, said that the horses have undergone special training, including how to handle weeping mourners, as well as flowers and flags being thrown onto streets as the procession passes by. 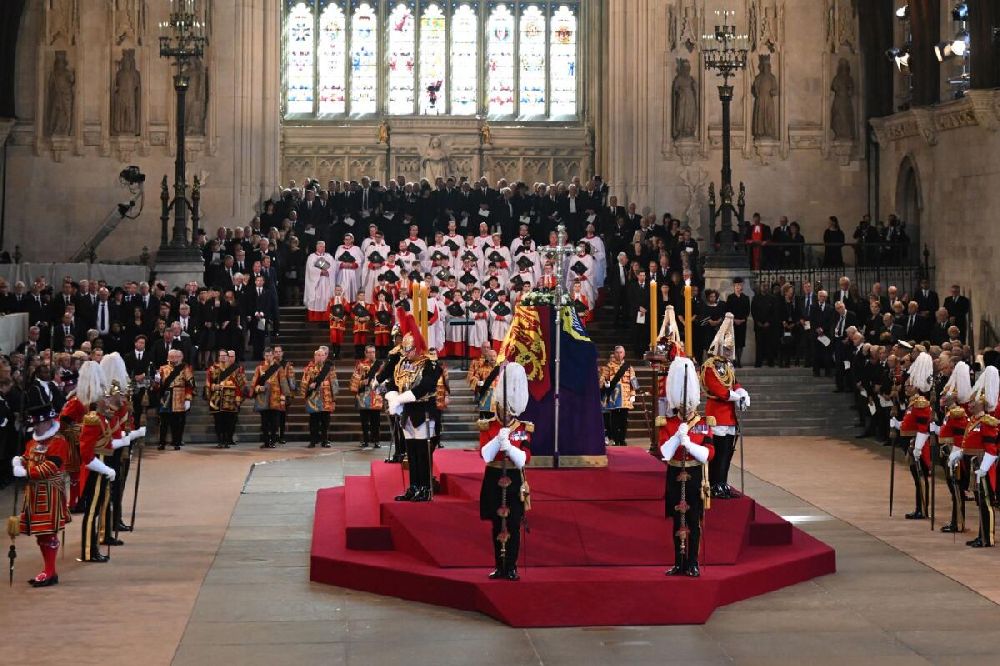 Since the early morning, people staked out prime viewing positions behind metal barriers along the Mall and other streets along the route. They stood or sat on folding chairs, umbrellas at the ready, takeout coffees in hand.

Crowds have lined the route of the queen’s coffin whenever it has been moved in its long journey from Scotland back to London.

On Tuesday night, thousands braved a typical London drizzle as the state hearse, with interior lights illuminating the sovereign’s flag-draped casket, drove slowly from a military air base into the heart of London. 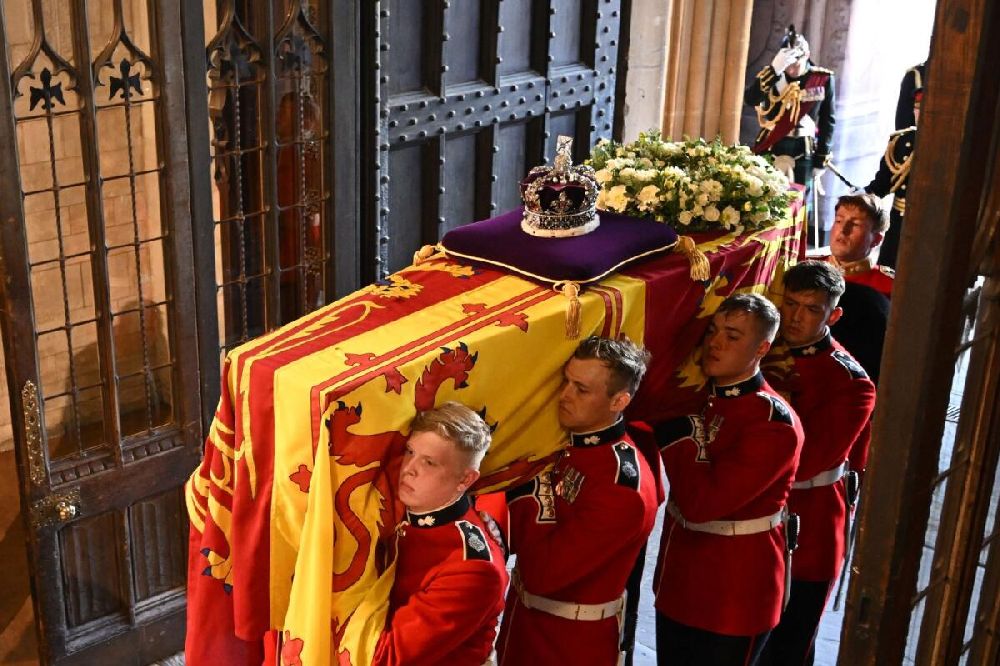 Earlier, in Edinburgh, some 33,000 people filed in silent respect past her coffin as it lay for 24 hours at St. Giles’ Cathedral.

Hundreds of thousands are expected to do the same in London when the queen lies in state at the 900-year-old Westminster Hall, the oldest building in Parliament, for four days before her state funeral on Monday.

The hall is where Guy Fawkes and Charles I were tried, where kings and queens hosted magnificent medieval banquets, and where ceremonial addresses were presented to Queen Elizabeth II during her silver, golden and diamond jubilees. 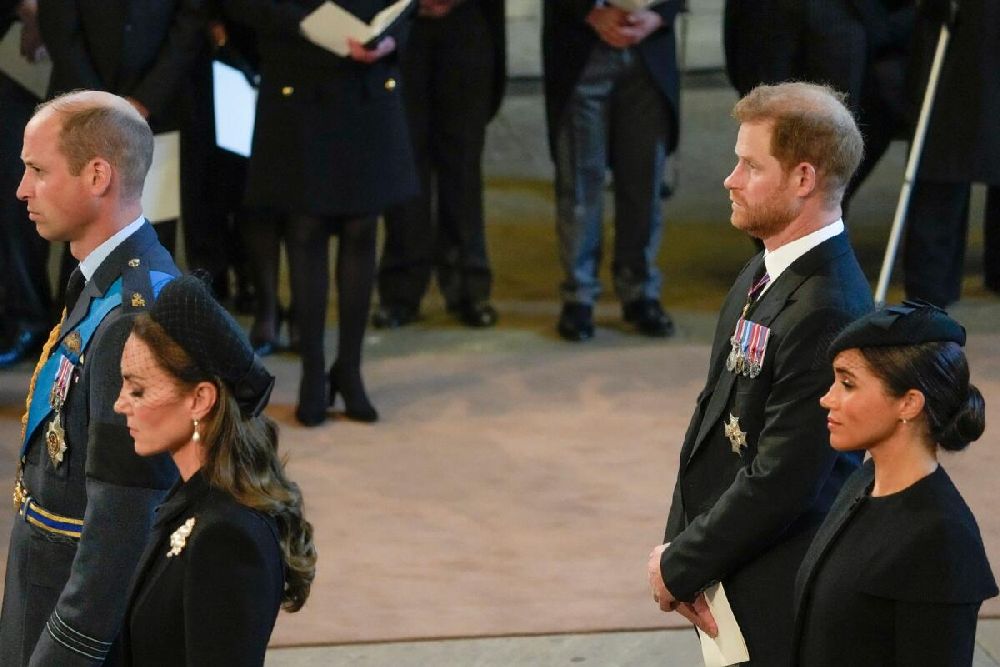 Chris Bond, from Truro in southwest England, was among those lining up along the banks of the River Thames. He also attended the lying in state of the queen’s mother in 2002.

“Obviously, it’s quite difficult queuing all day long, but when you walk through those doors into Westminster Hall, that marvellous, historic building, there was a great sense of hush and one was told you take as much time as you like, and it’s just amazing,” he said.

“We know the queen was a good age and she served the country a long time, but we hoped this day would never come,” he added.

Chris Imafidon, secured the sixth place in the queue.

“I have 1,001 emotions when I see her,” he said. “I want to say, God, she was an angel, because she touched many good people and did so many good things.”