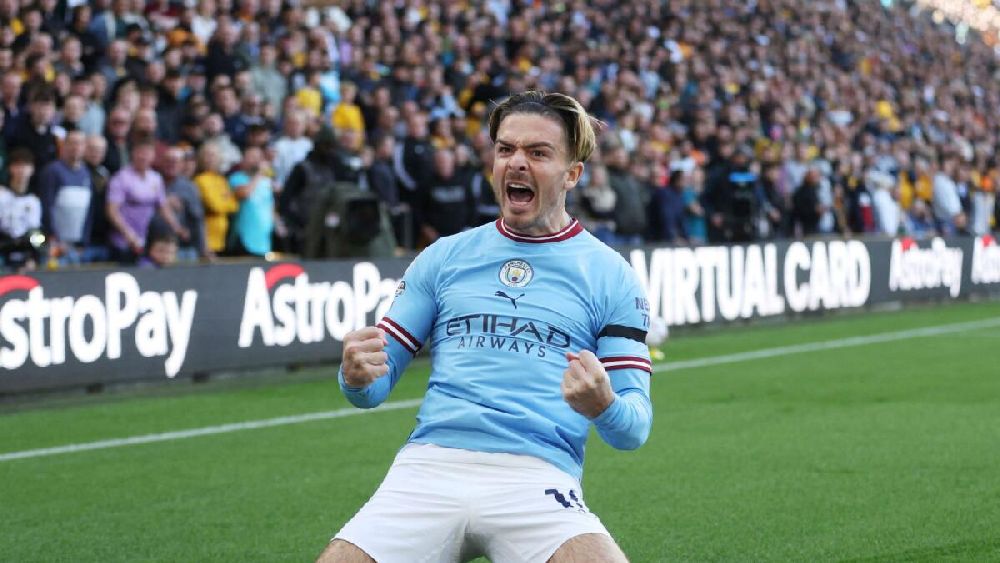 Jack Grealish scored his first goal this season and Erling Haaland extended his record-breaking hot streak as Manchester City powered to a 3-0 win over 10-man Wolves in the English Premier League on Saturday.

Pep Guardiola’s side needed just 56 seconds to take the lead at Molineux as Grealish finally enjoyed a day to remember after a difficult time since joining City from Aston Villa last year.

Haaland doubled City’s advantage with his 14th goal in 10 games in all competitions following a £51 million ($58 million) move from Borussia Dortmund that already appears a bargain.

Wolves lost any chance of a fightback when Nathan Collins was sent off for an ugly stomach-high foul on Grealish in the first half.

Phil Foden capped City’s stroll in the Midlands sunshine as the Premier League champions moved to the top of the table.

Unbeaten City are two points clear of second-placed Arsenal, who would regain pole position if they win at Brentford on Sunday.

“The game started really well for us with the two goals and the red card. After the Champions League to come here at 12:30 with the quality they have, it was an incredible victory. Erling continues to score goals, that’s top,” Guardiola said.

Even Guardiola may run out of superlatives to describe the 22-year-old Norwegian if he continues this astonishing run.

Haaland was named Premier League Player of the Month for August after his blistering start to the season and he is already making his case for the September award.

He has netted in seven successive games for City and is the first player to score in their first four Premier League away appearances.

Showing their hunger to win the title for a fifth time in six seasons, City are unbeaten in a club record 22 away league matches since losing at Tottenham in their opening game last season.

“Jack played really good. He was strong and he made a good goal,” Guardiola said.

Grealish added: “I’m always going to have people talking about me with the money that was spent on me, but all my career I haven’t scored enough goals.

“It is nice when Pep defends me. He has been brilliant with me. I probably have to thank him because he gave me the opportunity today after my performance on Wednesday.”

The Premier League has returned to action after last weekend’s games were postponed following the death of Queen Elizabeth II and there were minute’s silences and renditions of the national anthem at all Saturday’s matches.

At St James’ Park, Newcastle had to settle for a point for the fifth time in seven games this season as Bournemouth earned a 1-1 draw.

Magpies manager Eddie Howe was frustrated by his former club, who took the lead against the run of play in the 62nd minute when Phillip Billing stabbed in Jordan Zemura’s cross.

In Saturday’s late game, Tottenham can move above Arsenal into second place if they beat bottom of the table Leicester.