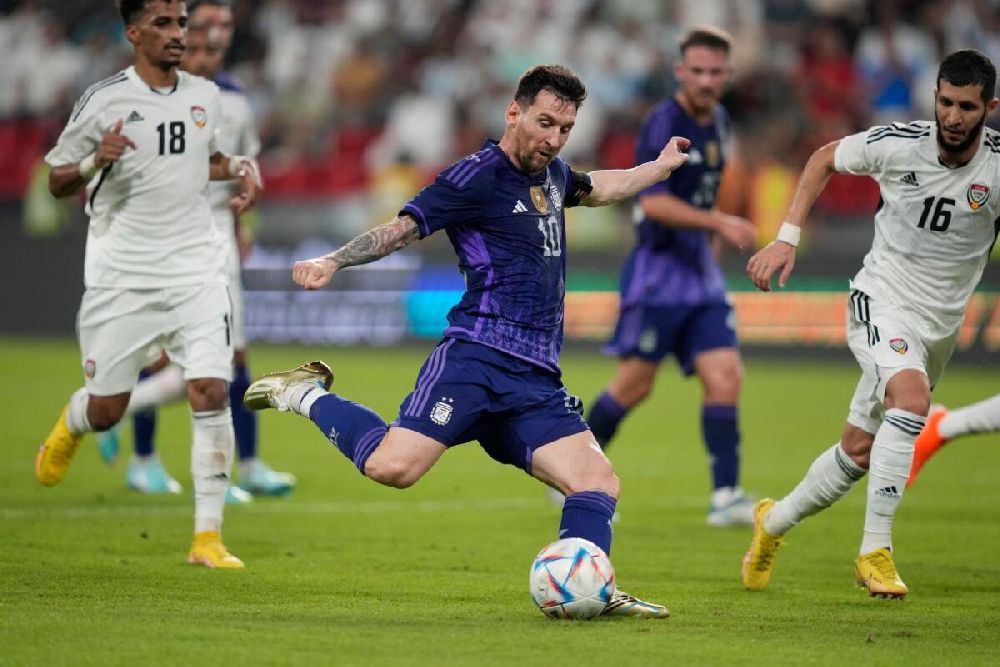 Argentina delivered a footballing masterclass against the UAE in a friendly match played in front of a full house at the Mohamed bin Zayed Stadium in Abu Dhabi on Wednesday.

The dominating 5-0 win by Argentina underlined why the South American powerhouse are a firm favourite to win the Fifa World Cup in Qatar.

Angel Di Maria scored two goals, while Manchester City striker Julian Alvarez and captain Lionel Messi scored one each as Argentina took a commanding 4-0 lead in the first half.

Coach Lionel Scaloni made several changes in the second half, but the 35-year-old Messi played the full 90 minutes as Joaquin Correa added a fifth in the 60th minute of the match.

The highly anticipated contest produced goosebump moments when the national anthems of the UAE was played after Argentina’s and the capacity crowd were seen singing ‘Ishy Bilady’ and boosting the morale of the home side for a tough encounter.

And despite being dominated by Argentina, the home side weren’t outclassed in the early going.

The UAE backline of Khaled Al Dhanhani, Shaheen Abdul Rahman, Khalifa Al Hammadi and Al Hassan Saleh were able to contain the forays from Messi and his teammates.

The national side did well with their opportunities with Harib Abdullah and Caio testing keeper Emiliano Martínez. However, there was no real threat and bite in the finish by ‘the Whites’.

Meanwhile, the visitors kept up the pressure and finally a breakthrough came courtesy a fine delivery from Angel Di Maria into the box and a one-two between Messi and Alvarez resulted in the young City striker converting with ease.

In 25 minutes, Marcos Acuna delivered a pass from the left flank, which the Juventus star Di Maria scored with a first-time volley as keeper Khaled Issa looked on helplessly.

After 30 minutes, Argentina were awarded a free-kick for a foul outside the box. ‘Messi, Messi’ chant was back but the playmaker wasn’t able to produce his signature magical moment with his famous left foot.

In the 36th minute, Di Maria found his second of the night, thanks to some sloppy defending inside the box as he easily trod past his way into the goal.

Six minutes later, Messi came close to making it a 4-goal advantage but missed a header.

However, just two minutes later the seven-time Ballon d’or winner made amends with a fine finish by steering clear of a few defenders and blasting the ball into the right corner of the goal as the side finished 4-0 at half-time.

After the break, the UAE returned stronger of the two side and started with a few attempts on goal.

However, Argentina made it 5-0 with a goal from substitute Correa, who converted from a fine pass from Rodrigo De Paul.

At the other end, Caio Canedo had several opportunities to score – twice the striker was one on one with the goalkeeper to beat. And on another occasion, his left-foot nudge didn’t find direction. An attempt also crashed into the bar. It seemed to be one of those nights when the rub of the green didn’t go with the UAE players, who despite the margin of score line put up a spirited show.

The home team will be back in action against Kazakhstan in another friendly on Saturday as they prepare for the Arabian Gulf Cup.

The match was hosted as part of the strategic cooperation agreement between the Argentina Football Association (AFA) and Abu Dhabi Sports Council.