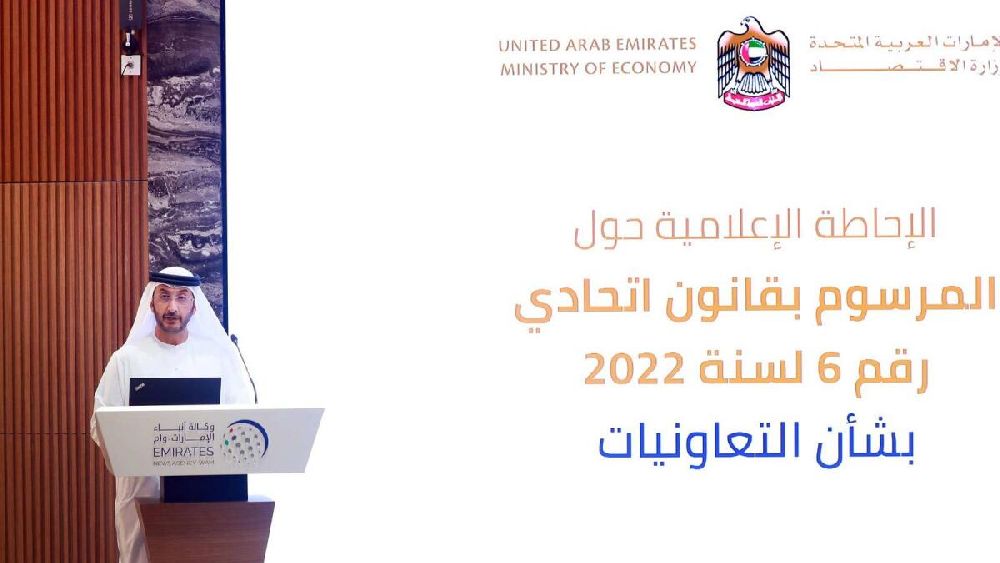 New Cooperative Law will encourage members of the community to establish cooperatives in new sectors and diversify their operations to increase its contributions to the UAE’s non-oil gross domestic product (GDP) to five per cent by 2031, says a top official of Ministry of Economy.

Abdullah bin Ahmed Al Saleh, Undersecretary of the Ministry of Economy, said the UAE issued the Federal Decree-Law No. 6 of 2022 on cooperatives, aimed at developing and enhancing the cooperatives sector to take it to higher levels of prosperity.

“In light of the new law, the Ministry of Economy has set two new goals. The first one is to increase the contribution of cooperatives to the non-oil GDP to five per cent by the year 2031 as compared to the sector’s current contribution of less than one per cent. The second goal is to increase the number of members contributing to cooperative unions to nearly 500,000 from the current 100,435,” Al Saleh said at the media briefing.

The Ministry of Economy said law establishes a milestone in the cooperatives sector, thus contributing to building a leading cooperative experience that keeps pace with international standards.

Al Saleh emphasized that the UAE, in line with its wise leadership’s vision and directives, has adopted a new perspective on the development of the cooperatives sector, in order to position it as a key pillar to the country’s sustainable economic and social development.

The country is keen to launch policies that comprehensively enhance the performance of this key sector, strengthen the cooperatives system and its contribution to the national GDP, and support the diversity, competitiveness, and sustainability of national economy in line with the principles of the 50 and the UAE Centennial 2071 goals.

Al Saleh said the new law on cooperatives marks an important stage in the development of the sector’s governance.

“The Ministry of Economy and its partners, including local and federal government entities, the cooperatives sector, and the private sector, have adopted a proactive and flexible approach to the development of the law, also taking future economic trends into consideration,” he said.

Furthermore, he said the ministry relied on comparative studies that use advanced countries in the field of cooperatives as case studies.

“The UAE Federal National Council has also reviewed the Law to ensure an updated and integrated legislation in line with global best practices, and to meet the evolving needs of the UAE’s business environment.”

The Ministry worked alongside its partners to develop the articles of the law by following a flexible and proactive approach that foresees future trends and through comparative studies that analyzed leading global cooperative models in order to create the new, integrated legislation. It aligns with global best practices and efficiently meets the demands of the UAE’s business environment.

Al Saleh stated that the new law is an extension of the legal and corporate frameworks governing the UAE’s cooperatives sector currently, ensuring its sustainability and maximizing its growth potential.

“The law creates new prospects for all members of society to participate in the cooperative sector’s operations, in addition to building a new generation of leaders in the cooperatives sector. It generates more employment opportunities in this vital sector, encouraging and spreading the innovative cooperative culture in society. This will be achieved by allowing non-citizens to obtain memberships in the country’s cooperatives, except for consumer cooperative associations with memberships that are exclusive to UAE nationals,” he said.

As per the law, cooperative unions in the UAE will have more room to diversify their activities and expand in the country’s markets while ensuring complete protection of the participants’ rights. The law also supports building leading Emirati cooperative associations in new sectors, most notably the new economy sectors, as well as in the fields of health, education, tourism, financial services, and other vital and priority sectors in the UAE.

The law also supports the expansion of cooperatives’ activities and businesses in the country and the provision of technical, financial, operational, and marketing support to them by allowing them to add strategic partners for the benefit of the cooperative. The Ministry of Economy will issue a decision shortly specifying the terms and procedures for adding strategic partners to cooperatives.

The new law supports the national digital economy as well by allowing the establishment of new cooperative association in digital fields, and the expansion in advanced technological activities, thus keeping pace with global advancements in this regard, and supporting the UAE’s vision on investing in and expanding the new economy sectors.

Al Saleh emphasized that the new law supports the UAE’s efforts in organising cooperative work in accordance with the international best practices, as it has seven conditions that cooperative associations must adhere to in order to maintain the core principles of the cooperative sector. Most notably, these include the implementation of the general policy of cooperative unions emanating from the law and its executive regulations; voluntary contribution to social responsibility, especially by allocating a percentage of their annual or total profits for this purpose; not inciting hatred and sectarian, racial or religious conflicts; and working to raise the social and economic prosperity of their members.

Al Saleh clarified that the new cooperatives law organises all the procedures and working mechanisms in the field, as well as the establishment of new cooperative associations in the country. The law also grants the Ministry of Economy and relevant authorities the right to oversee and follow up with cooperative unions and their activities, members, and contributors according to clear methods, in addition to governing the general policy preparation processes for cooperative unions and their categories.

He further pointed out that the new law will be implemented starting December 2022, and that the Ministry is currently preparing its executive regulations, in collaboration with its partners from federal and local entities and representatives from the cooperative, and it is expected that these regulations will be issued within the next six months. 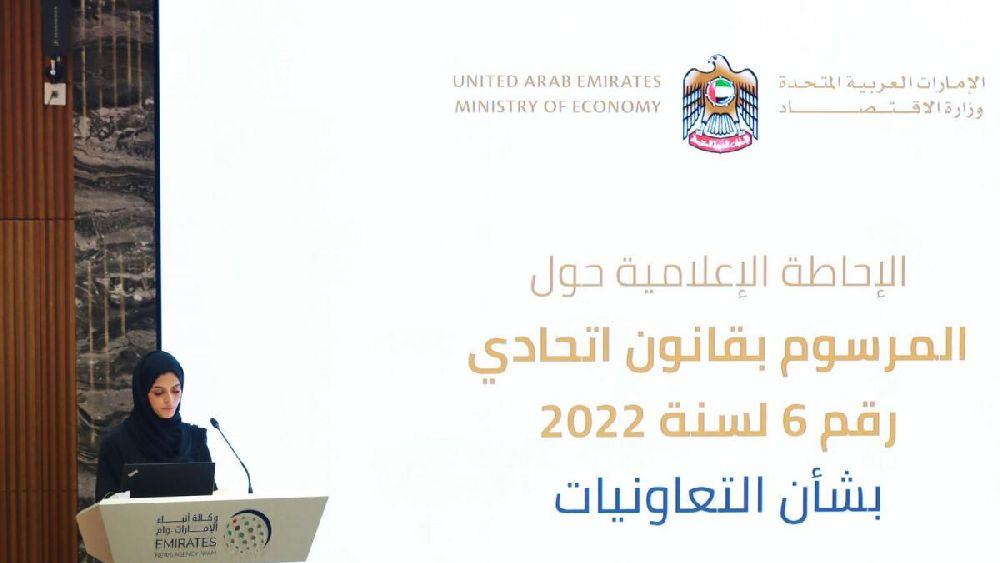 Samah AlHajeri, director of Cooperatives & Strategic Reserve, Ministry of Economy, said the UAE is moving forward with the development of the cooperative sector in accordance with international best practices, thus cementing the national economy’s strength and promoting its resilience and sustainability, and ability to compete regionally and globally.

During the media briefing, AlHajeri highlighted the main provisions of the new law, which foster the readiness and growth of the UAE cooperative sector and promote its competitiveness regionally and globally. These are:

• The law enables cooperative societies to open branches in UAE, subject to the approval of the concerned authorities.

• The law grants the cooperative society the right to transform into a company in the specified form, as per the conditions to be stipulated in the executive regulations of the law. Moreover, a cooperative society may merge with another one, subject to the approval of the concerned authority.

• Upon its formation, the cooperative society will have a legal entity and a financial liability that is independent from the members. The cooperative society is entitled to borrow from the private or the public sector, issue bonds, securities or any financial instruments or shares according to conditions and standards to be specified in the executive regulations.

Al Hajri also explained the requirements related to the membership of cooperative societies in the country, most notably:

• The establishment of a cooperative society comprising at least 10 people with an exception may be made by a decision from the competent authority. The executive regulations of the law specify the conditions of forming the board of directors, its terms of reference, the provisions of assignment, exit, heirs, and voting.

• Cooperatives must keep a Cooperatives Register, which includes all data about the members, their qualities and the number of shares they own. The cooperative shall have a capital to the extent necessary to achieve its purposes, consisting of nominal shares of equal value.

• The cooperative’s capital consists of cash shares and in-kind shares. The cash contributions should be deposited in a bank in the country, and the in-kind shares are financially assessable assets not pledges or services.

• The law divides cooperatives into two categories: the first category is non-core cooperatives where each contributing member has one vote regardless of the number of shares he owns. The second category is core cooperatives that may grant additional privileges to the contributing members, including multiple voting rights, increased volume of investments, and other preferential rights according to conditions and controls to be stipulated in the law and its executive regulations.

In addition, the law specifies penalties and fines for violators, the most prominent of which are:

• A fine of no less than Dh200,000 and not more than Dh1 million, for anyone who furnishes false or misleading data in the articles of incorporation, statutes, share prospectuses, or annual statements and reports.

• A fine of no less than Dh100,000 and not more than Dh1 million for anyone who unlawfully uses a name or logo that disguises it as a cooperative. This also includes those who use a cooperative logo illegally.