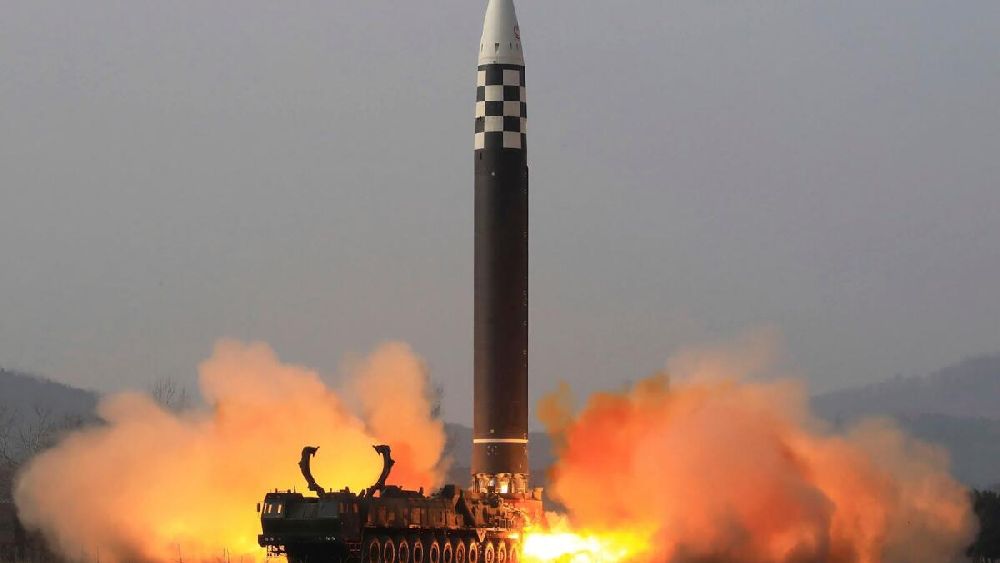 North Korea said Friday it test-fired its biggest-yet intercontinental ballistic missile under the orders of leader Kim Jong Un, who vowed to expand the North’s “nuclear war deterrent” while preparing for a “long-standing confrontation” with the United States.

The report by North Korean state media came a day after the militaries of South Korea and Japan said they detected the North launching an ICBM in its first long-range test since 2017.

The launch extended a barrage of weapons demonstrations this year that analysts say are aimed at forcing the United States to accept the idea of North Korea as a nuclear power and remove crippling sanctions against its broken economy that has been further damaged by pandemic-related difficulties.

The Hwasong-17, which was fired at a high angle to avoid the territorial waters of neighbours, reached a maximum altitude of 6,248 kilometres (3,880 miles) and travelled 1,090 kilometres (680 miles) during a 67-minute flight before landing in waters between North Korea and Japan, Pyongyang’s official Korean Central News Agency said.

KCNA claimed the launch met its technical objectives and proved the ICBM could be operated quickly during wartime conditions.

The South Korean and Japanese militaries had announced similar flight details, which analysts say suggested that the missile could reach targets 15,000 kilometers (9,320 miles) away when fired on normal trajectory with a warhead weighing less than a ton. That would place the entire US mainland within striking distance.

Believed to be about 25 meters (82 feet) long, the Hwasong-17 is the North’s longest-range weapon and, by some estimates, the world’s biggest road-mobile ballistic missile system. North Korea revealed the missile in a military parade in October 2020 and Thursday’s launch was its first full-range test.

KCNA paraphrased Kim as saying that his new weapon would make the “whole world clearly aware” of the North’s bolstered nuclear forces. He vowed for his military to acquire “formidable military and technical capabilities unperturbed by any military threat and blackmail and keep themselves fully ready for long-standing confrontation with the US imperialists.”

The agency published photos of the missile leaving a trail of orange flames as it soared from a launcher truck on an airport runway near the capital, Pyongyang, and Kim smiling and clapping as he celebrated with military officials from an observation deck. Other images showed Kim penning a memo ordering the Hwasong-17 test flight and approving the launch. 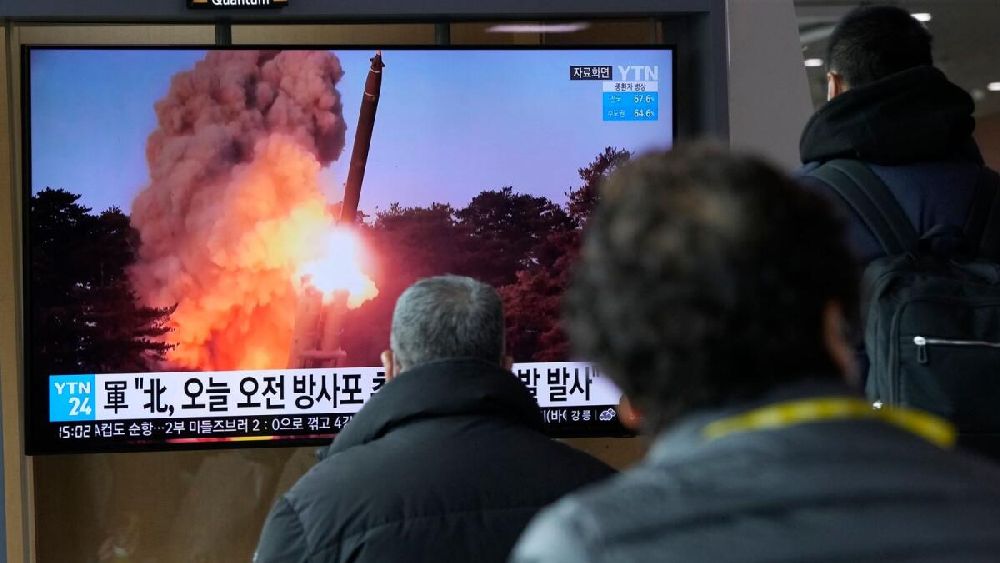 Kim has issued handwritten orders for some of the most significant weapons demonstrations of his rule over North Korea, including its previous most recent ICBM test-flight in November 2017, which capped a highly provocative run in nuclear and missile tests that triggered a verbal exchange of war threats with then-President Donald Trump.

South Korea’s military responded to Thursday’s launch with live-fire drills of its own missiles launched from land, a fighter jet and a ship, underscoring a revival of tensions as diplomacy remains frozen. It said it confirmed readiness to execute precision strikes against North Korea’s missile launch points as well as command and support facilities.

“Whatever North Korea’s intent may be, the North must immediately suspend action that create tensions on the Korean Peninsula and destabilizes the regional security situation and return to the table for dialogue and negotiations,” ministry spokesperson Cha Deok-cheol said in a briefing.

The United States requested an open Security Council meeting on the launch and anticipates it on Friday, Linda Thomas-Greenfield, the US ambassador to the United Nations, told reporters.

Thursday’s test was North Korea’s 12th round of launches this year and the most provocative test since President Joe Biden took office.

North Korea’s resumption of nuclear brinkmanship reflects a determination to cement its status as a nuclear power and wrest badly needed economic concessions from Washington and others from a position of strength, analysts say. Kim may also feel a need to trumpet his military accomplishments to his domestic audience and drum up loyalty while the country faces economic difficulties. 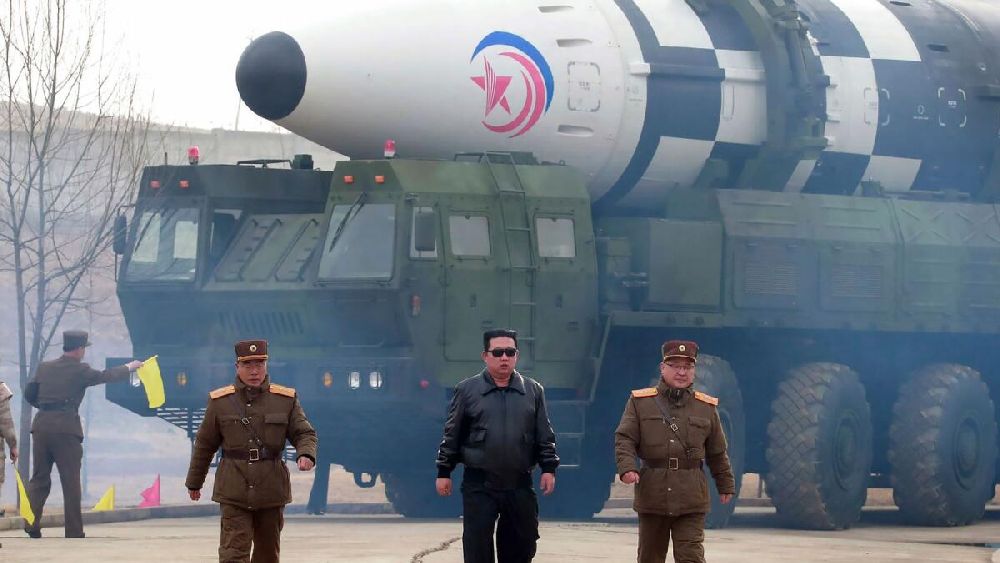 The other tests included a purported hypersonic weapon, a long-range cruise missile and an intermediate-range missile that could reach Guam, a major US military hub in the Pacific. The US and South Korean militaries had expected a full-range test of the Hwasong-17 after concluding two of the recent midrange launches included components of the new ICBM.

Following its streak of nuclear explosive and ICBM tests in 2017, Kim suspended such testing in 2018 ahead of his first meeting with Trump. But the diplomacy derailed in 2019 when the Americans rejected North Korean demands for a major release of US-led sanctions against the North in exchange for a limited surrender of its nuclear capabilities.

The ICBMs launched in three 2017 test flights demonstrated they could reach into the US mainland. The larger Hwasong-17 may be intended to be armed with multiple warheads to overwhelm missile defenses.

North Korea’s ruling party in January had issued a veiled threat to end Kim’s moratorium on ICBM and nuclear tests, citing US hostility.

South Korea’s military has also detected signs that North Korea may be restoring some of the nuclear-testing tunnels it detonated just before Kim’s first meeting with Trump in 2018.

Some experts say the North may resume nuclear testing in coming months to claim it has acquired an ability to build nuclear warheads small enough to fit on some of its new delivery systems, including the hypersonic missile.