Markets will tighten and prices will surge if Europe cuts off its 2.1 million-plus barrels per day of oil from Russia 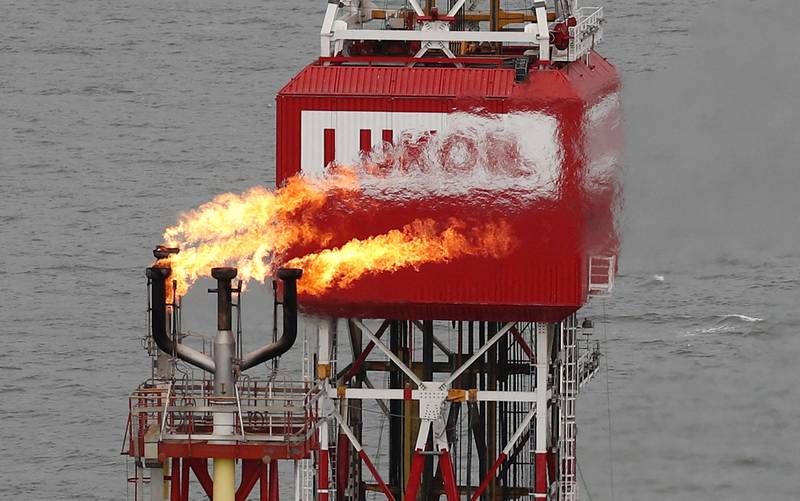 A gas torch is seen next to the Lukoil company sign on an oil platform in the Caspian Sea. Oil prices increased after Russia confirmed oil exports via the Caspian Pipeline Consortium will fall by around a million barrels a day for up to two months as a result of storm damage. Reuters

“Russia confirmed that oil exports via the Caspian Pipeline Consortium will fall by around a million barrels a day for up to two months as a result of storm damage. This comes at a time of significant tightness in the market and could contribute to further increases in the price in the coming weeks,” said Craig Erlam, a senior market analyst at Oanda.

“That is of course unless other producers step up and utilise the spare capacity in order to prevent oil prices from hitting recessionary levels. But that still seems a stretch despite the efforts of leaders from a variety of consuming countries unless Russia decides to support such a move.”

European Union members will discuss a possible oil embargo on Russian crude on Thursday in response to Moscow’s military offensive in Ukraine, but are divided about imposing a ban due to the heavy reliance of some countries, namely Germany and Hungary, on Russia’s oil. A decision on a ban requires the approval of all 27-member states of the EU.

“Though Europe has not firmly committed to cutting off its more than 2.1 million bpd of oil originating from Russian pipelines and ports, the meeting on Thursday could yield tougher measures against Moscow, potentially confirming the anticipated supply risks to Russian upstream oil in the short,” said Louise Dickson, Rystad Energy’s senior oil market analyst.

“An EU embargo would tighten the market … Filling refineries with more expensive crude would likely result in a decrease in European runs. A full-out oil ban almost 1 month into the Ukraine invasion would be a policy turning point for Europe, which has so far avoided any energy sanctions.” On Wednesday, Russian President Vladimir Putin said his country would only accept payment in roubles from hostile nations for Moscow’s gas, which caused European gas prices to soar 30 per cent.

“Next week, colder weather is expected in continental Europe, a bullish factor for prices, however the geopolitical situation will continue to be the price driver for gas, the power price setter for peak hours in major markets,” said Rystad Energy’s analyst Fabian Ronningen.

“Prices are expected to still be high, given the current forward curves, in the ranges of €200-250 per megawatt hour.”

The US announced this month that it would ban crude, gas and coal imports from Russia, while the UK will phase out imports of Russian oil during the course of the year.

The Russia-Ukraine crisis has led to higher oil prices, which has added to inflationary pressures on the global economy boosting food costs and the price of commodities. The International Monetary Fund and other organisations have said the conflict will dent global growth this year, increase poverty and disrupt supply chains.

On Wednesday, White House national security adviser Jake Sullivan said the US and its partners had made progress in the Iran nuclear talks, but there are still challenges. The easing of Iranian export restrictions would ease some of the supply constraints in the market.

“The events in energy markets overnight were a harsh dose of reality to the world’s markets,” said Jeffrey Halley, a senior market analyst at Oanda. “Even if the conflict in Ukraine stopped tomorrow, the inflationary wave from commodity disruptions will not. The world has changed, and globalisation is the loser.”