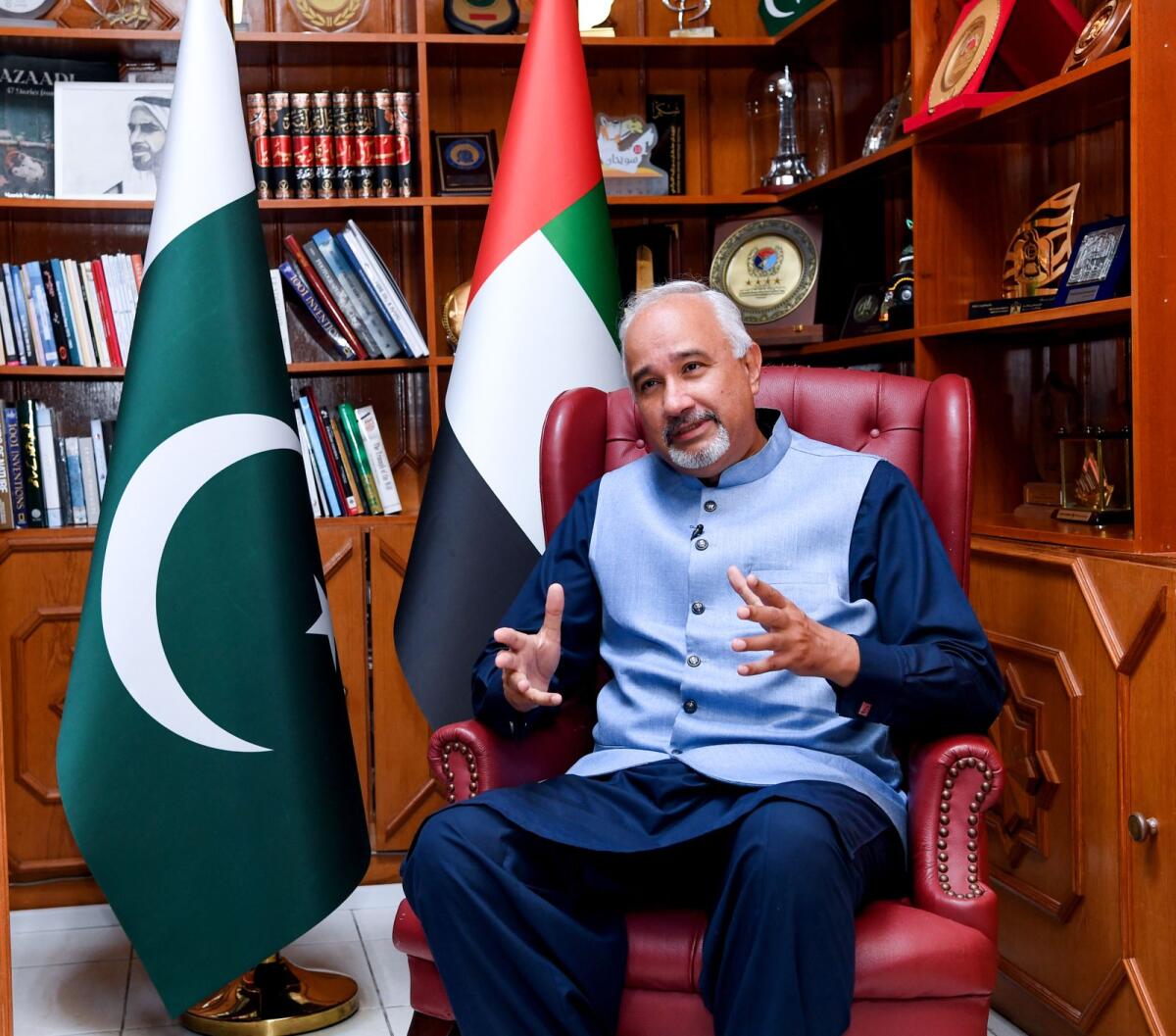 The bilateral trade between Pakistan and the United Arab Emirates is expected to grow double from the US$10.6 billion (Dh38.9 billion) volume achieved in 2021-2022, Pakistan’s top diplomat in the UAE said.

The last calendar year recorded a US$10.6 billion in trade “the highest volume Pakistan had in the Middle East and North Africa (Mena) region,” he added.

“The potential is much more. I have been tasked by the political leadership of my country to increase trade, promote business opportunities, investment and elevate cultural interaction between Pakistan and the UAE,” Ambassador Faisal Niaz Tirmizi told the Emirates News Agency (Wam) in an exclusive interview at the Embassy of Pakistan in Abu Dhabi.

Tirmizi, who assumed his responsibilities as Pakistan’s new Ambassador to the UAE in October 2022, spoke in detail about topics concerning Pakistan-UAE relations, economic cooperation, climate change, tourism, and cultural exchanges.

Ambassador Tirmizi said that the UAE and Pakistan enjoy historic relations. “Pakistan was the first country to send its ambassador six months before the formation of the UAE. Our first ambassador Jamiluddin Hassan came to the UAE in June 1971.

“We sent our economic, agriculture, and defence advisors way before that,” Mr. Tirmizi who served as a counsellor during 2007-2010 at Pakistan Embassy in Abu Dhabi, said.

“Pakistanis consider the UAE their second home and vice versa. The close geographical proximity between the two countries gives a great opportunity to work together,” he further stated.

CEPA an opportunity to increase trade

The Ambassador confirmed that Pakistan has started negotiations on the Comprehensive Economic Partnership Agreement (CEPA) with the UAE and hoped to have significant progress by the year’s end.

“Yes, we are working on this, it is very important. The ministry of commerce of Pakistan is in touch with the relevant authorities in the UAE and hopefully, we will make some significant progress on this agreement before 2023.”

The UAE is the biggest trading partner of Pakistan in the MENA region, he said, adding that CEPA would provide an opportunity for the two countries to increase their bilateral trade many folds.

So far, the UAE has signed CEPA with three countries.

Fintech and IT sector collaboration

The ambassador highlighted three sectors namely Fintech, IT, and Startups, where Pakistan and the UAE can further collaborate.

“Last year our exports increased to US$3 billion in these sectors. We have skilled manpower and new startups. I will be focusing very closely on this, because I think there are immense opportunities between the UAE and Pakistan to further collaborate.”

UAE assistance for the flood-affected areas in Pakistan

Ambassador Tirmizi said that the UAE was the most generous country that provided humanitarian relief to flood-affected areas in Pakistan, thanking President His Highness Sheikh Mohamed bin Zayed Al Nahyan, for his noble gestures.

Pakistan entering next phase of rehabilitation

Pakistan is organising an international conference on “Climate Resilient Pakistan” in Geneva on 9th January 2023 to mobilise international community support towards building back better after the devastating floods.

It will be co-chaired by the country’s Prime Minister Muhammad Shehbaz Sharif and the UN Secretary-General António Guterres. Pakistan has estimated flood damages to exceed US$14.9 billion, economic losses over US$15.2 billion, and reconstruction needs over US$16 billion.

“That (conference) will be a massive reconstruction effort towards rebuilding the lives and livelihoods of those affected,” the ambassador said.

The ambassador said that the UAE has taken a lead in climate change as it is hosting COP28 in November 2023, and has the headquarters of IRENA, which is an intergovernmental organisation supporting countries in their transition to sustainable energy.

“Climate change is something that is really impacting the lives and livelihood of so many people,” he noted, adding that Pakistan is only contributing less than 1 percent to global greenhouse gas emissions and is one of the most vulnerable countries to the impacts of climate change.

“We have one flood in 10 – 20 years and in 2010 and 2011 we had two floods and now the latest flood. Glaciers in the north of the country are disappearing,” he said, stressing that climate change should be addressed “as climate and environment are the common heritage of our planet”.

He said that as chair of Group 77, Pakistan negotiated the establishment of loss and damage fund at the Sharm el-Sheikh Climate Change Conference (COP 27). “We will be carrying forward the same thing that those countries who have been badly impacted by the effect of climate change, their issues have to be addressed.”

The ambassador said that the UAE has taken a lead in clean energy. “They are investing both in technology and in projects like solar, wind or any other renewables.”

“Pakistan will be working closely with the UAE, and you will see very soon the fruition of these negotiations that have already started between the two countries,” he added. “Hopefully, we will see a big project in renewables in Pakistan.”

The ambassador identified some sectors where the two countries can increase their cooperation, saying that Pakistan’s Indus valley civilisation has contributed richly to the world heritage.

“We have Gandhara civilisation, a rich Islamic heritage, and a Sikh heritage that we would like to promote in the UAE. Pakistan pavilion at the Expo 2020 Dubai depicted the strong culture and civilisation of Pakistan,” he said. “We want to promote culture, music, and art footprint in the UAE and vice versa.”

“We will encourage Emiratis as well as other nationalities to visit Pakistan and enjoy the rich diversity, the natural beauty of the country, and most importantly the warmth of the people,” the ambassador said.