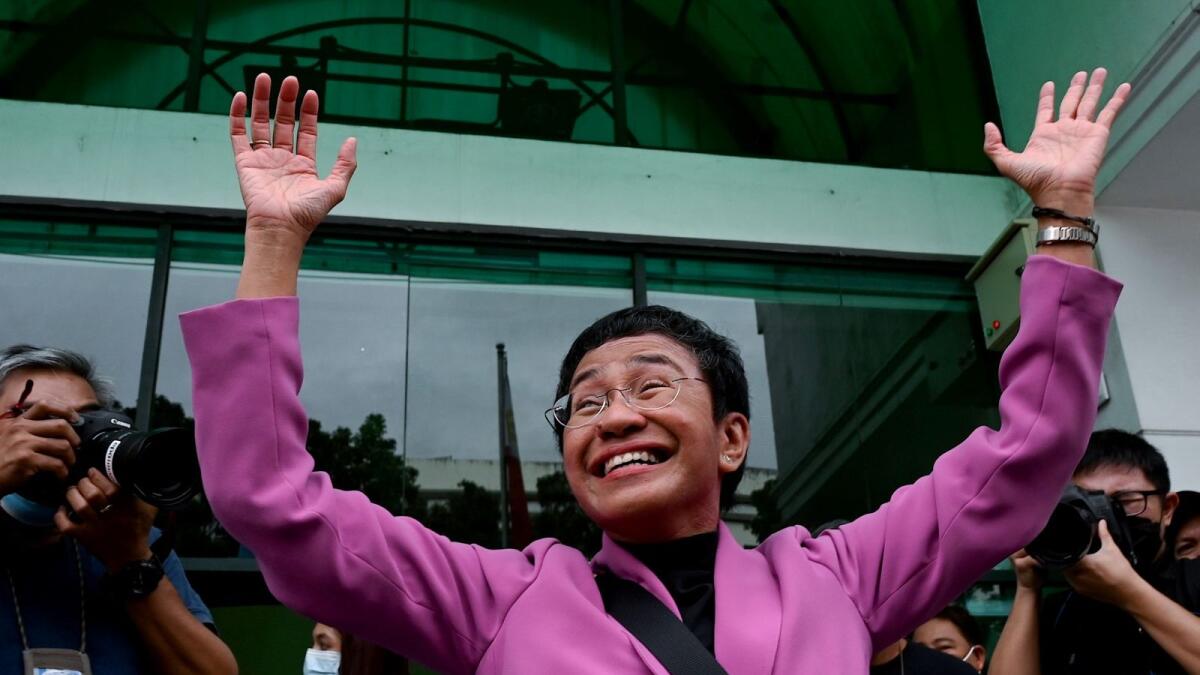 Philippine Nobel Prize winner Maria Ressa was on Wednesday acquitted of tax evasion, among a slew of charges she has long maintained are politically motivated, calling the verdict a victory for “truth”.

Ressa, who shared the Nobel Peace Prize with Russian journalist Dmitry Muratov in 2021, still faces three other cases, including a cyber libel conviction now under appeal that could mean nearly seven years in prison.

“Today, facts win. Truth wins,” a teary-eyed and defiant Ressa told reporters outside the Manila courtroom after the ruling on four government charges that she and her online media company Rappler had dodged taxes in a 2015 bond sale to foreign investors.

It was her first court acquittal since former president Rodrigo Duterte’s government began filing charges against her. Ressa had earlier termed the cases “politically motivated” and “a brazen abuse of power”.

The tax court said prosecutors failed to prove “beyond reasonable doubt” that Ressa and Rappler had evaded income taxes.

In a separate interview with AFP following her acquittal, Ressa said the verdict was a “victory for journalists” in the Philippines and around the world.

“If you stand up to power, yes you get beaten up (for) four years and two months. But right will win,” Ressa said.

“I think this is hope for anyone who has been unjustly accused.”

The 59-year-old has been battling a series of cases that media advocates say were filed due to her vocal criticism of Duterte and his drug war, which claimed thousands of lives.

Ressa and Muratov were awarded the Nobel for their efforts to “safeguard freedom of expression”.

In a statement, Rappler said: “An adverse decision would have had far-reaching repercussions on both the press and the capital markets… With you we will continue to #HoldTheLine” — a slogan used to symbolise their fight for press freedom.

“Today’s acquittal… marks an important and positive step towards upholding rule of law and media freedom,” the two countries’ embassies in the Philippines said in a coalition statement.

German Ambassador Anke Reiffenstuel on Twitter hailed the ruling as “a victory for journalists, #PressFreedom and the rule of law in the PH.”

Despite the acquittal, Ressa faces potential prison from the cyber libel case, while the future of Rappler, which she founded in 2012, remains uncertain.

Ressa told AFP she was more hopeful about the prospects in the remaining cases, although she had left her fate up to the courts.

“What we do know is that the world is watching and that we have a government that wants the world to watch. So I’m optimistic about it,” Ressa said.

Rappler is challenging a Philippine Securities and Exchange Commission order to close for allegedly violating a ban on foreign ownership in media.

Under the constitution, investment in media is reserved for Philippine citizens or entities controlled by citizens.

The case springs from a 2015 investment by US-based Omidyar Network, established by eBay founder Pierre Omidyar.

Omidyar Network later transferred its Rappler investment to the site’s local managers to stave off efforts by Duterte to shutter it.

The third outstanding case is also a tax-dodging charge against Ressa and Rappler.

Philippine President Ferdinand Marcos said in September he would not interfere in Ressa’s cases, citing the separation of powers between the executive and judicial branches of government.

Trouble for Ressa and Rappler began in 2016, when Duterte came to power and launched a war against drug trafficking in which, according to official data, more than 6,200 people were killed in police anti-narcotics operations.

Rappler was among the domestic and foreign media outlets that published shocking images of the killings and questioned the crackdown’s legal basis.

Ressa and Rappler endured what press freedom advocates say was a grinding series of criminal charges, probes and online attacks.

Duterte’s government said previously it had nothing to do with the cases against Ressa.